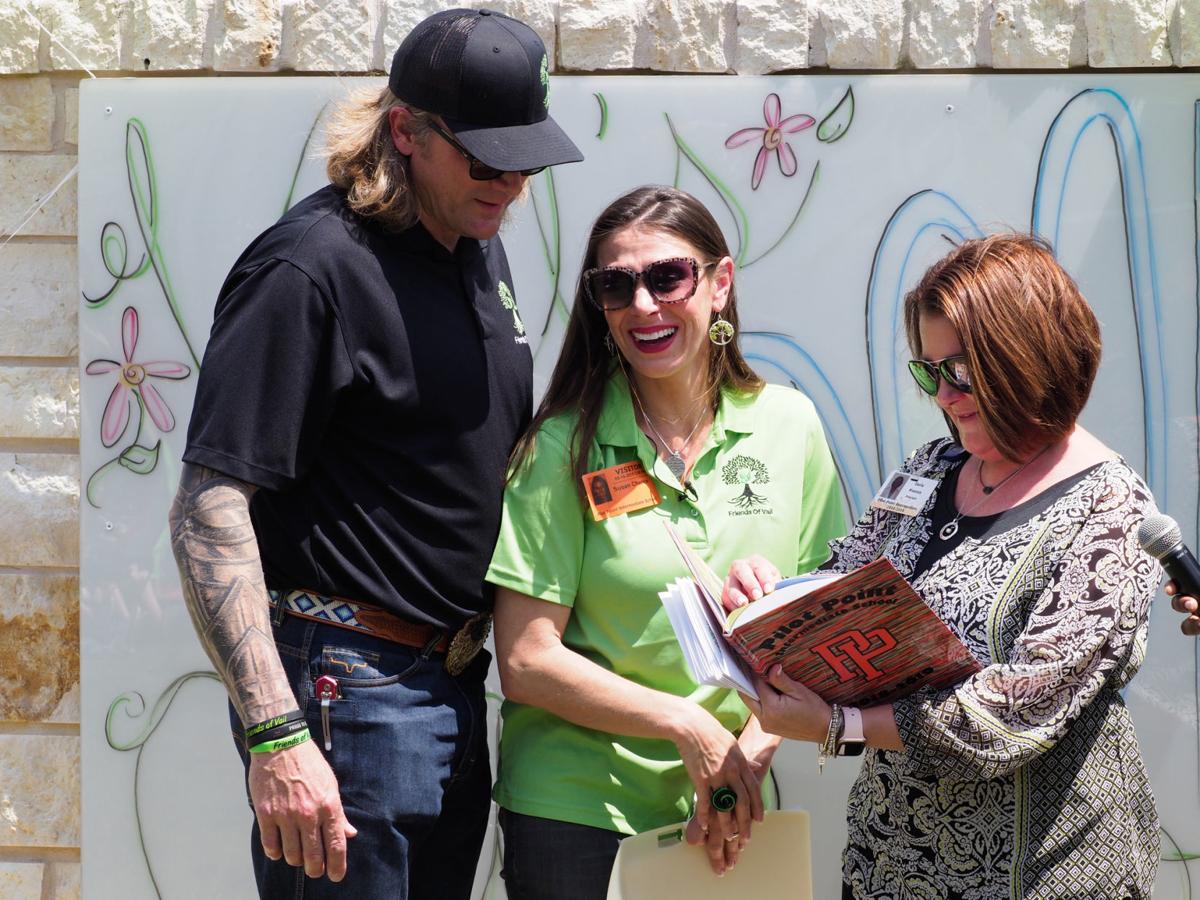 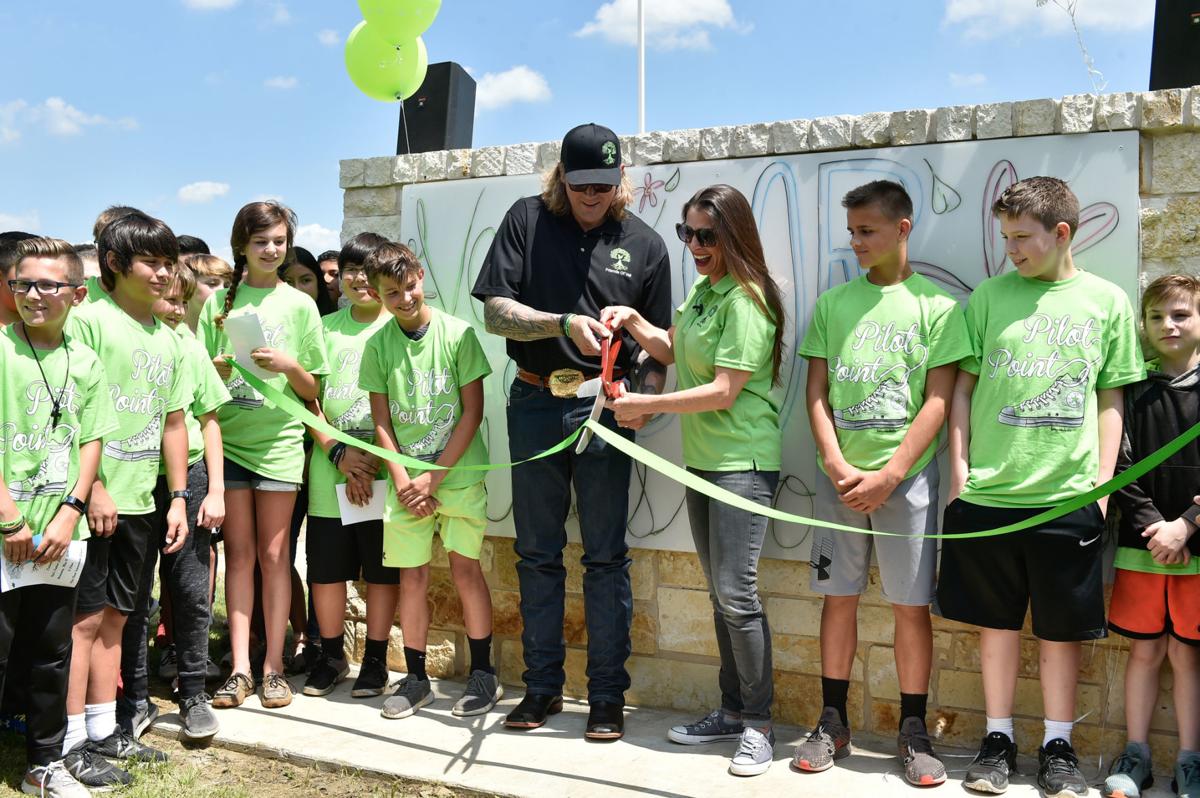 Chad Chance and Susan Chance are surrounded by students as they cut a ribbon during a dedication ceremony for Vail's Outdoor Classroom on Wednesday at Pilot Point Intermediate School. Vail Johnson passed away unexpectedly on Aug. 31, 2016, from a heart condition. She would have been a sixth-grader now. 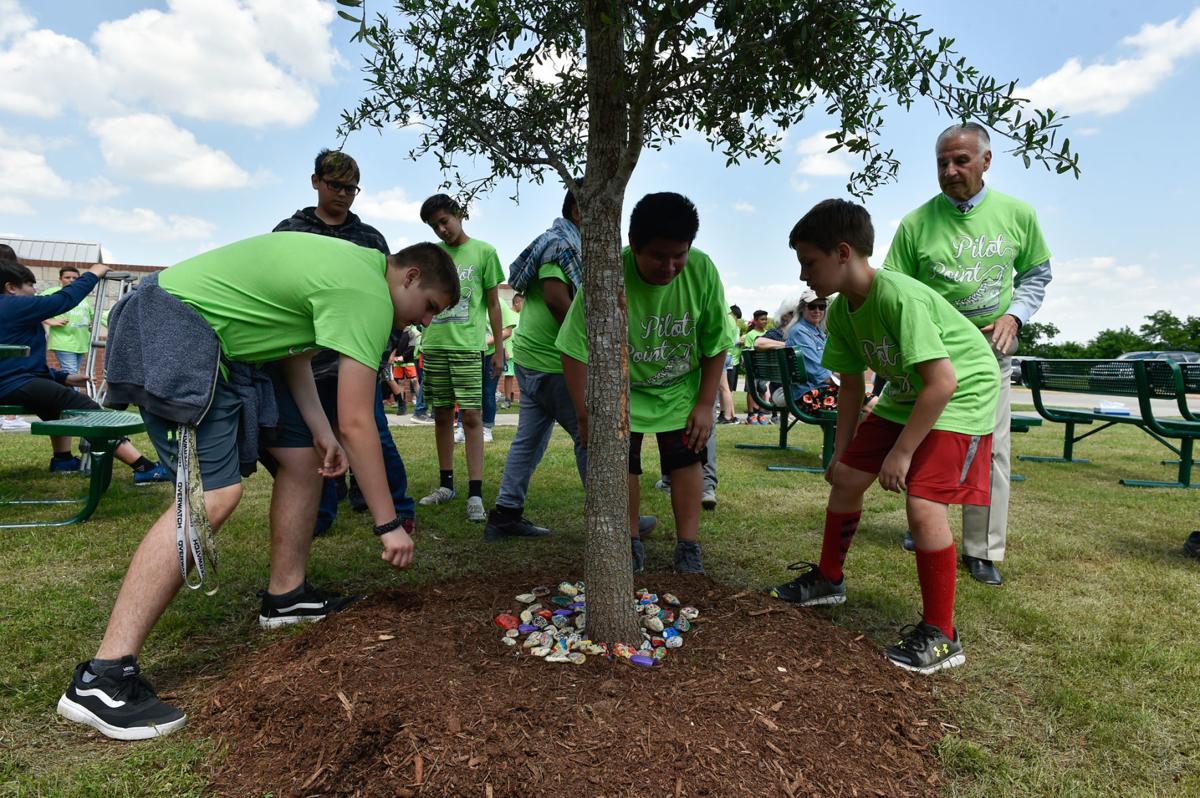 Students place decorated rocks under a tree during a dedication ceremony for Vail's Outdoor Classroom on Wednesday at Pilot Point Intermediate School. The tree is in memory of former classmate Vail Johnson, who passed away unexpectedly on Aug. 31, 2016, from a heart condition. She would have been a sixth-grader now.

PILOT POINT — Vail Johnson would have been 12 years old Wednesday.

With balloons, speakers, her parents, dozens of friends and her favorite color peppered throughout the area, a ceremony Wednesday afternoon at Pilot Point Intermediate School had many of the trappings of a birthday party. First impressions aside, those gathered outside the school were there to honor Johnson nearly three years after her unexpected death from a heart condition.

Susan and Chad Chance, Vail’s mother and stepfather, spoke at the event.

“We just appreciate you kids coming out and taking the time out of your day to help us celebrate her life on today, which would have been her 12th birthday,” Chad Chance said. “Susie and I shed some tears this morning because it’s hard to believe because we see you guys growing up and she’s locked in a time capsule at 9 years old.”

They were assembled for the dedication of Vail’s Outdoor Classroom. Funding for benches, a tree, stone wall and a large whiteboard was secured by a nonprofit the Chances set up.

Two benches, those installed closest to the whiteboard, were custom-made with the nonprofit’s name, Friends of Vail, cut into the metal backrest. The tree was christened “Vail’s Tree.”

Superintendent Dan Gist opened the ceremony to welcome those in attendance and thank those who made it a possibility.

“I was thinking today and, really, the whole week,” Gist said, “Vail has left a legacy in our community, especially in our schools.”

He mentioned a space in the library at the elementary school, a special area to remember the avid writer Vail proved herself to be. Her parents said she wrote about 50 small books by the time she entered first grade. With the help of an Atlanta-based author, the Chances are working to get four of her books published soon.

Additionally, money from Friends of Vail helped in the construction of a concession stand at the district’s softball complex.

“Vail’s gone from us right now on this earth, but she’s not forgotten,” said her stepfather.

Common in speeches and imagery throughout the dedication ceremony were references to trees, butterflies and lime green.

Susan and Chad Chance said the color was Vail’s favorite.

“That was her color,” Susan Chance said. “Her cleats were green, and she always wore green on her shorts. It’s just funny that was her choice, but that was her favorite color; she was not a girly-girl.”

Her husband said the tree imagery came from the first story Vail wrote, titled “If I Were a Tree.” In it, Vail said if she were a tree, she would be a stool.

“Basically, something somebody could use,” Chad Chance said. “When you read it, it’s her interpretation of the Gospel of Christ.”

Later, the family went to a butterfly garden in Arizona where Vail appeared to be a magnet for the insects, so they also became part of the aura surrounding the young girl.

During Wednesday’s event, Chad Chance was wearing a black Friends of Vail polo with a tree and butterfly logo stitched in lime green on the chest.

In larger versions of the logo, like the one tattooed to his forearm, the numeral “7” is common. Not only was it his stepdaughter’s favorite number, he said, but it is also the “complete number in the Bible.”

Throughout the ceremony, the Chances were presented with several mementos to mark to occasion, but one in particular struck them harder.

Principal Darla Wooten showed them a copy of the school’s yearbook for 2018-19. As soon as it was flipped open, Susan Chance put her hands to her face. Reddening and visibly suppressing tears behind sunglasses, she said her thanks as best she could while her husband smiled and fidgeted before the onlookers. Inside was a full-page collage of Vail.

Chad Chance said they have plans to put similar outdoor classrooms in many other schools. They do not yet have the next school picked out.

“On days like today, being stuck in the classroom with six days of school left, they can come out here and learn and be in the open air,” he said. “We really believe that it can help the kids learn.”

To cap the ceremony, sixth graders surrounded the tree with small rocks. Each stone was painted by a student and signed with their name.

A line filed to and from the tree. Rock by rock, mulch was overcome with small shows of support for a missing piece of the community.