Wallis was arrested last week and charged with two counts of an improper relationship between a student and an educator, according to Denton County Jail records.

“Tate Wallis has offered his resignation and we have accepted,” UNT said in a statement.

Wallis is accused of inappropriate behavior with students during his time as an assistant football coach at Argyle High School.

The charges relate to alleged incidents on Oct. 4 and Dec. 3 involving inappropriate contact with a student manager with the Argyle football program on the sidelines at practices and during games, according to the arrest affidavit.

Wallis allegedly began commenting on the student’s appearance in the summer of 2019 and later started groping her at practices and during games, according to the affidavit.

Wallis’ conduct allegedly escalated from brushing against the victim to the point of touching her buttocks and breasts with his hands, the affidavit says. He also allegedly “cupped” the victim’s genitals, according to the affidavit, which says she was 16 at the time.

Wallis was Argyle’s offensive coordinator from 2018 through January 2020, when he left to become UNT’s quarterbacks coach.

“It has been a privilege to be a part this football program. Thank you for the opportunity to coach a fine group of players,” Wallis said in his resignation letter obtained by the Denton Record-Chronicle through an open records request.

“I appreciate the support I have received from our community. At this time, I believe it is in my best interest to step down from my position to focus on my family and defending the allegations that have been made against me. I look forward to clearing my name. I value this organization and I don’t want my upcoming legal battle to be a distraction to the players, coaches and University of North Texas Supporters.” 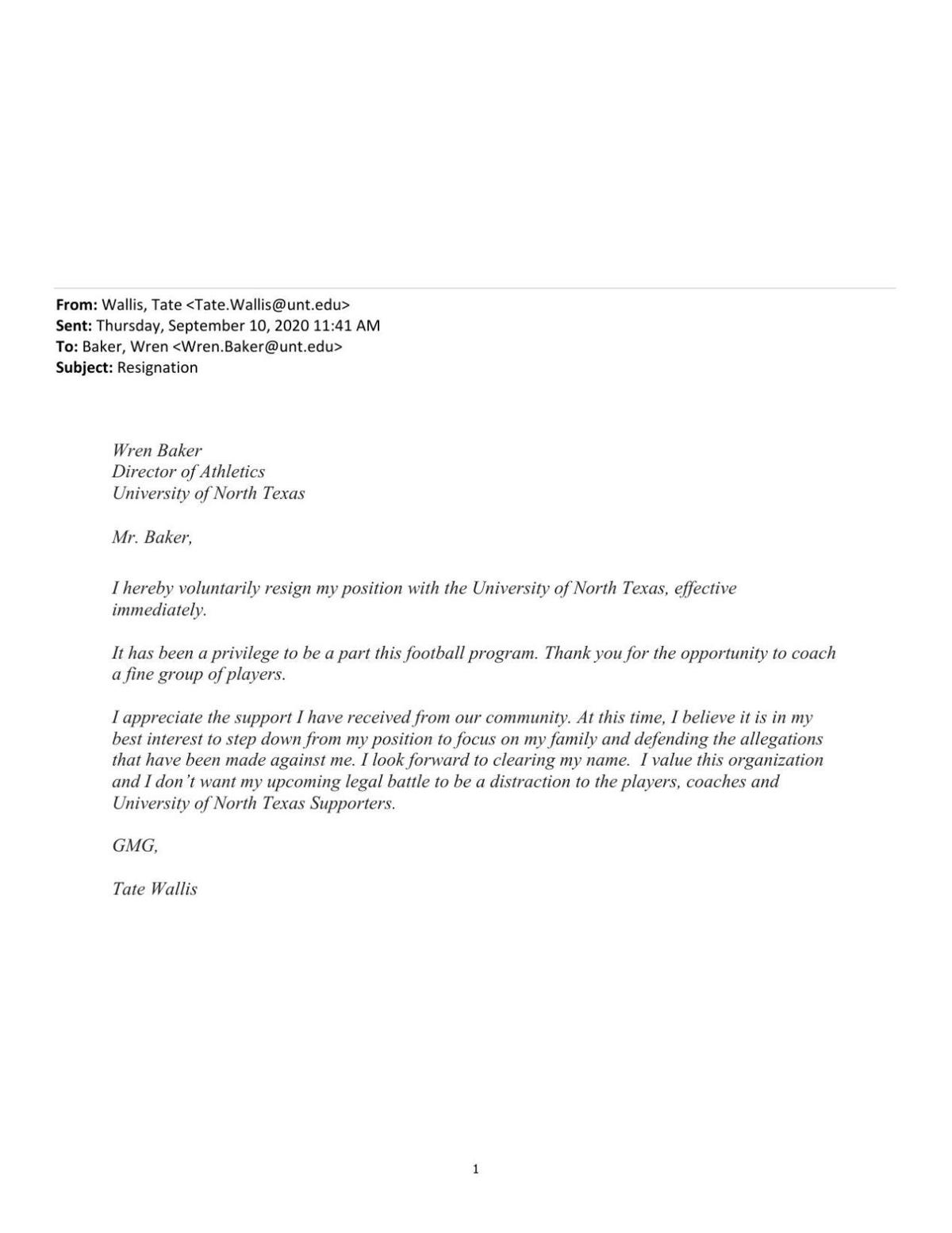 Argyle coach Todd Rodgers has not responded to multiple requests for comment.

UNT coach Seth Littrell declined to comment on Wallis following the Mean Green’s win over Houston Baptist University on Saturday. He referred to UNT’s initial statement on Wallis that said the university had placed him on leave.

UNT said it was reviewing information regarding the case.

“We will take appropriate action following completion of the review,” the school’s statement said.

Wallis did not receive a settlement or buyout from UNT, a source confirmed to Record-Chronicle. His yearly salary was $100,000.

Earl Dobson, a Denton criminal defense attorney, is representing Wallis and issued a statement to the Record-Chronicle on Thursday afternoon.

“Coach Wallis voluntarily resigned his position with the University of North Texas Football Program, effective immediately,” the statement says. “He maintains his innocence and is preparing to defend himself against the pending criminal charges in the court system. Coach Wallis wants the best for his players and believes the ongoing legal battle would be a distraction to the players, coaches and University of North Texas supporters.”

Wallis last worked on the college level at Baylor University from 2009-15 under Art Briles, who was fired 2016 in the wake of a sexual assault scandal. Wallis served as graduate assistant coach and analyst before being promoted to wide receivers coach in 2015.

UNT officials spoke with more than a dozen people, including representatives of Wallis’ last four employers, before hiring him.

That vetting process made UNT officials comfortable with hiring Wallis, despite multiple incidents in his past that raised questions about his fitness to coach on the college level again.

The NCAA cited Briles and Wallis for impermissible contact with recruits during the spring.

Wallis also confronted Brenda Tracy, a noted advocate in the fight against sexual violence in college athletics, when she spoke at the school in the summer of 2016.

Tracy recalled the players being responsive to her message.

Wallis stopped Tracy on her way out of the room and asked to speak to her.

“Tate was very angry,” Tracy recalled in a phone interview Saturday. “He said, ‘Why are you here? Who brought you? We don’t have a problem here. Nothing happened. This is a conspiracy against football.’ He was very angry and defensive about my visit and why I was there.”

Tracy said she has been to about 90 campuses and spoken to thousands of athletes and coaches without being confronted like she was by Wallis.

UNT officials were aware of the incident before hiring Wallis, whose time at the school ended Thursday after less than eight months on Littrell’s staff.