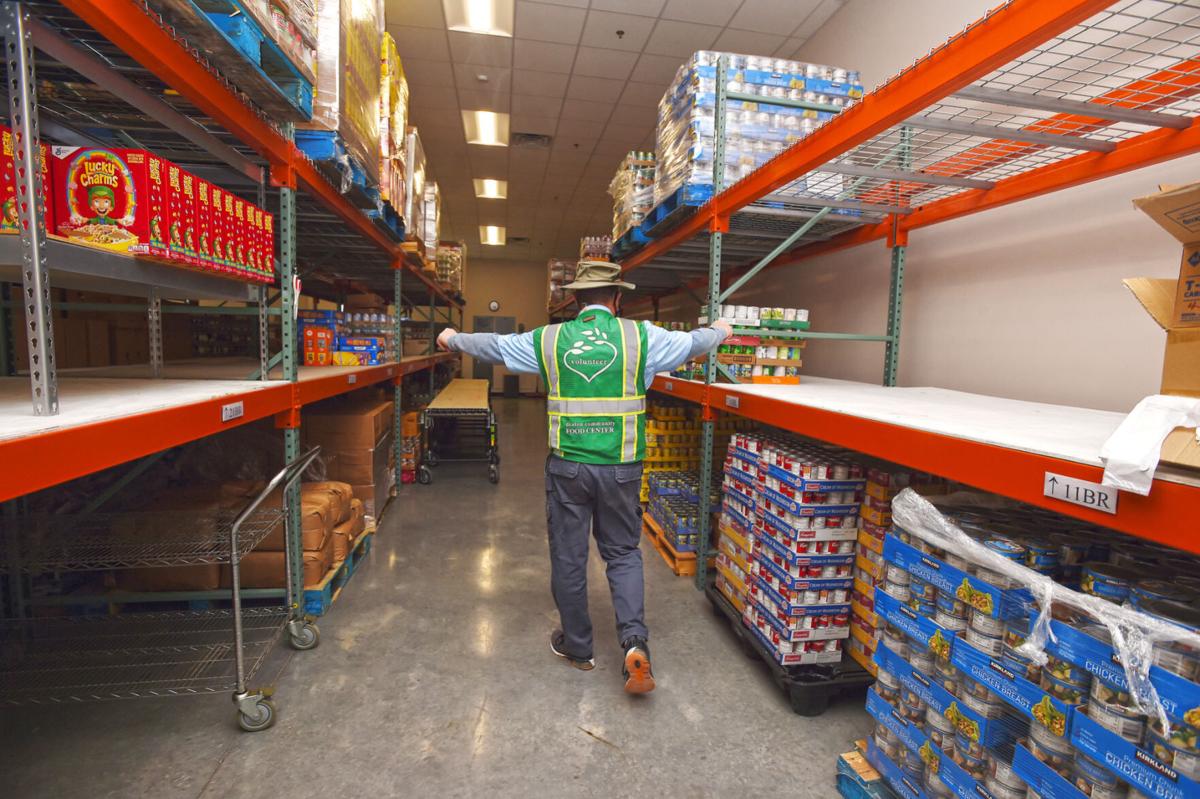 Tom Newell, board chair of the Denton Community Food Center, points to the empty shelves showing all the groceries they gave away during Monday's food distribution day. The center's next distribution day is 1-3 p.m. Wednesday. 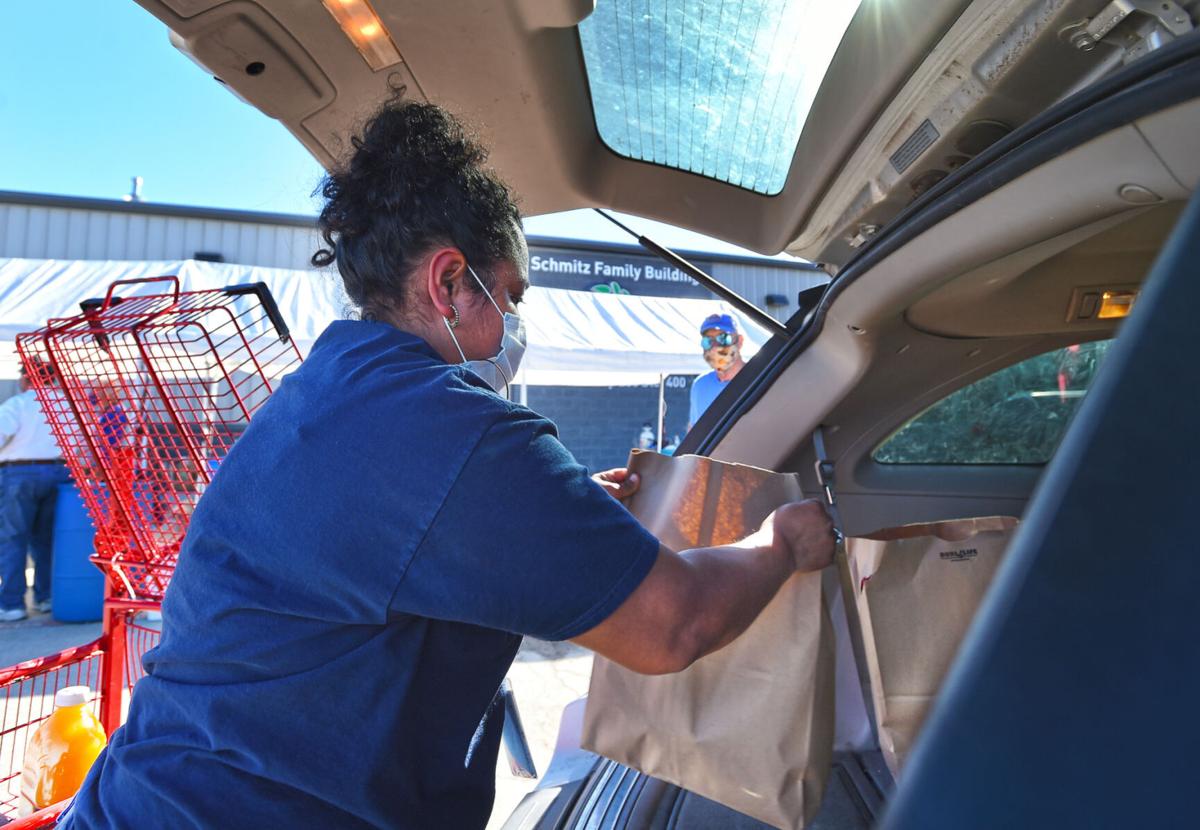 Perla Naciso loads up groceries that she received from the Denton Community Food Center on Monday.

Tom Newell, board chair of the Denton Community Food Center, points to the empty shelves showing all the groceries they gave away during Monday's food distribution day. The center's next distribution day is 1-3 p.m. Wednesday.

Perla Naciso loads up groceries that she received from the Denton Community Food Center on Monday.

The snow and ice are gone, but the damage is still here and the time for healing and relief is now.

Local nonprofits and grassroots groups came together last week to get supplies, food and water to residents left without power, and some without power and water. When the city alerted residents to boil water as a result of pressure dropping in parts of the city’s water distribution system, demand for bottled water spiked.

During last week’s freeze, grassroots organizers met established nonprofits, businesses and city officials to get locals what they needed.

Randi Skinner, owner of RS Consulting, said she and former Denton resident Katy McBride were texting back and forth about the dropping dominoes of disaster. First rolling power outages, then empty grocery store shelves, then water scarcity.

Skinner said they couldn’t find water in bulk, and they weren’t going to purchase water needed by grocery stores.

Last Wednesday, Skinner and McBride (who helped from out of town) formed a Facebook group: Denton Grassroots Water Crew. In the meantime, they tapped their network, and downtown business owners Suzanne Johnson of The Chestnut Tree, Ben Esely of The Bearded Monk and Seth Morgan of Denton County Brewing Co. invited them to use their businesses as drop-off sites. Johnson found a water supplier at Fisher59, and donors started giving money to cover costs. Austin Ford, a brewer at Denton County Brewing Co., offered the brewers’ water supply — reserved to make beer — for people to fill with gallon containers.

“[The] entire group of volunteers started with water and monetary donations,” said Mindy Arendt, co-founder and president of Friends With Benefits, a Denton nonprofit that raises money, awareness and material goods for other local nonprofits. “When the city took over the water distribution, we moved on to the next need — things for communities with no water — like paper plates, paper towels, utensils, canned ready-made food, etc. Can’t wash dishes with no water.”

Arendt said Friends With Benefits jumped in when Skinner put out the notice for action. More than 100 people donated to the cause through the nonprofit’s website, and downtown business jumped in to lend a hand — and trucks, and muscle for moving pallets-worth of goods along for assembly — including Denton County Brewing, Bearded Monk, Little Guys Movers, East Side Denton and Whiskey Hollow Distillery, to name just a few.

The water crew assembled volunteers to ferry water to apartment complexes and mobile home communities that had lost water to burst pipes and low supply. Skinner said they fielded calls and notices on the Facebook group, and each notification was spot on. They delivered water to nursing homes, and took water to elderly residents whose anxious children couldn’t get to them. On Thursday and Friday, as the need surged, Armadillo Ale Works and The Chestnut Tree donated jugs that the brewing company kept filling. Another volunteer got a discount on jugs from Uline, a shipping supplies business in Coppell.

“The guys at DCBC, they were willing to give their water as long as needs came up. If they had to give it all, they were ready to,” Skinner said.

As the week went on, Denton City Council member Paul Meltzer, who had been answering constituent queries since rotating power outages hit, helped transition water distribution to the Denton Civic Center. The city eventually open the Natatorium so residents could take showers. Then water crew pivoted to paper goods for those without water.

“It turned into this whole thing with all these people coming together saying, ‘Hey, I can help,’” Skinner said. “In addition to water we purchased, and the water coming from DCBC, Armadillo was ready to bottle water, but they wanted to make sure they weren’t going to be pulling from what was needed for people and cause problems [with the city’s supply]. Everyone gave something up. It was so awesome.”

Traditional nonprofits in Denton have also been organizing to provide relief this week after the weekend’s community-led effort to provide water.

The Denton Community Food Center, which distributes food at 306 N. Loop 288, has been a staple in the community to get nutritious food on people’s tables. Tom Newell, board chair for the nonprofit, said Monday after the day’s operation that the number of clients they served increased.

The food center works with clients on a rotating schedule, asking people to return every other week. Because they were closed last week due to the weather, the families who would have gone last week made their trip Monday instead. Newcomers stopped by as well, but Newell didn’t have solid numbers for them after the food drive ended.

“There’s a greater need for sure. It’s overwhelming [right now],” Newell said Monday while the food drive was still passing food out. “The peak of the crowd has kind of died down now but we had them all the way out in the street for the first 30 minutes. We expected a high demand.”

On Monday, they provided about 18,000 pounds of food to about 275 families, up from the food center’s previous standard of 170. He said they expected a rise in demand, knowing that some hourly employees couldn’t work last week due to the inclement weather.

“In January and February up to the storm, it was a little lighter than in November and December,” Newell said of the number of people seeking help. “We kept expecting it to go up, and we’ve been inching a little.”

Time will tell as the next food drive is on Wednesday, a weekday when Newell said they typically see the highest number of clients.

Although the organization wasn’t hit by power outages throughout the week, the Tarrant Area Food Bank was. The food bank provides the Denton Community Food Center with some of its food. The Denton center also purchases its own food to supplement what’s provided by the food bank.

“The Tarrant Area Food Bank had a 48-hour outage that caused them to have to toss some food that spoiled as a result [last week],” Newell said. “I don’t think it impacted anything we got today. They actually had so much on our truck today for our area and Cooke County, they couldn’t get it all on [the delivery truck] and we had to make a trip to pick up two pallets of our order.”

HelloFresh, a meal-kit subscription service, announced on social media Wednesday that the company would increase donation efforts to Texas and supply about $200,000 in immediate food relief through the Tarrant Area Food Bank.

One truckload of relief to North Texas came via a reality TV personality.

Melissa Poliseno, the director of marketing for the Cross Timbers Hope Center, said her church got word last Thursday that an organization founded by a Real Housewives of New York City cast member was sending a truck of supplies to Texas from Florida.

“The organization is called BStrong by Bethenny Frankel,” Poliseno said. “Another church, Manna Church, contacted us and said, ‘Hey, there is this truck coming. We need to let people know we’ve got a truck coming.’ At that point, we didn’t know what was in the truck.”

The truck arrived at 2 p.m. Sunday, bearing hygiene products, rice and dry beans, baby food, masks, gloves, bottled water and blankets. Poliseno said about 100 volunteers registered to help when Cross Timbers announced the distribution on Friday. Even more volunteers arrived, she said, including a 13-year-old girl who brought her birthday party guests. The volunteers put boxes together, and by 3 p.m., cars were lining up at the church in Denton.

“We had over 400 cars come through,” Poliseno said. “Some of the cars had multiple families and kids. It’s hard to get an accurate count, but I’d say we had close to 1,100 families.”

The Hope Center is a ministry of Cross Timbers Church, based in Argyle. When the pandemic shuttered many churches, Cross Timbers’ Denton Campus pivoted to become Hope Center. The ministry has been hosting its Feed the City food distribution every Friday at 5 p.m., giving groceries and hot meals from local restaurants that have partnered with the church. The Hope Center gave a $1,000 donation to the Denton Grassroots Water Crew to purchase water, too.

United Way of Denton County has established its Texas Winter Storm fundraiser to help impacted families over the coming weeks and months as they recover from the storm. The money raised will go to nonprofits in the area and directly to clients to help with lack of food, water and safe living conditions.

“We’ll cast a wide net across the county in terms of where the pressing needs are at,” said Gary Henderson, CEO and president of the local United Way. “[We’re hoping] we can get state and federal relief [soon], but we know it takes a while to get that to our neighbors.”

He said they’re looking primarily to help families in its ALICE category — asset-limited, income-constrained, employed. These are families who have income, but don’t have money saved up for emergencies.

While it will depend heavily on donations, Henderson said United Way can distribute the funds to its nonprofit partners quickly so they can provide relief in the coming weeks.

“Our nonprofits in county have many financial reserves stripped away at this point [due to COVID-19] and they can’t provide funding upfront before they can help,” Henderson said. “We want to have the flexibility to be as responsive as quickly as possible.”

The Grassroots Water Crew is continuing its efforts this week. A volunteer, teacher Nachel Konemann, connected with a friend in Chicago who is sending 1,000 cases of water to Denton. Operation Airdrop, a nonprofit relief organization founded in the wake of Hurricane Harvey, is sending a large shipment of supplies to Denton, too.

“I need a lot of volunteers for that shipment. A lot,” Skinner said

To volunteer for the Operation Airdrop distribution, join the Denton Grassroots Water Crew’s Facebook group for announcements and instructions.

Denton Grassroots Water Crew spent the last week assembling water and other supplies for residents without water during the freeze.