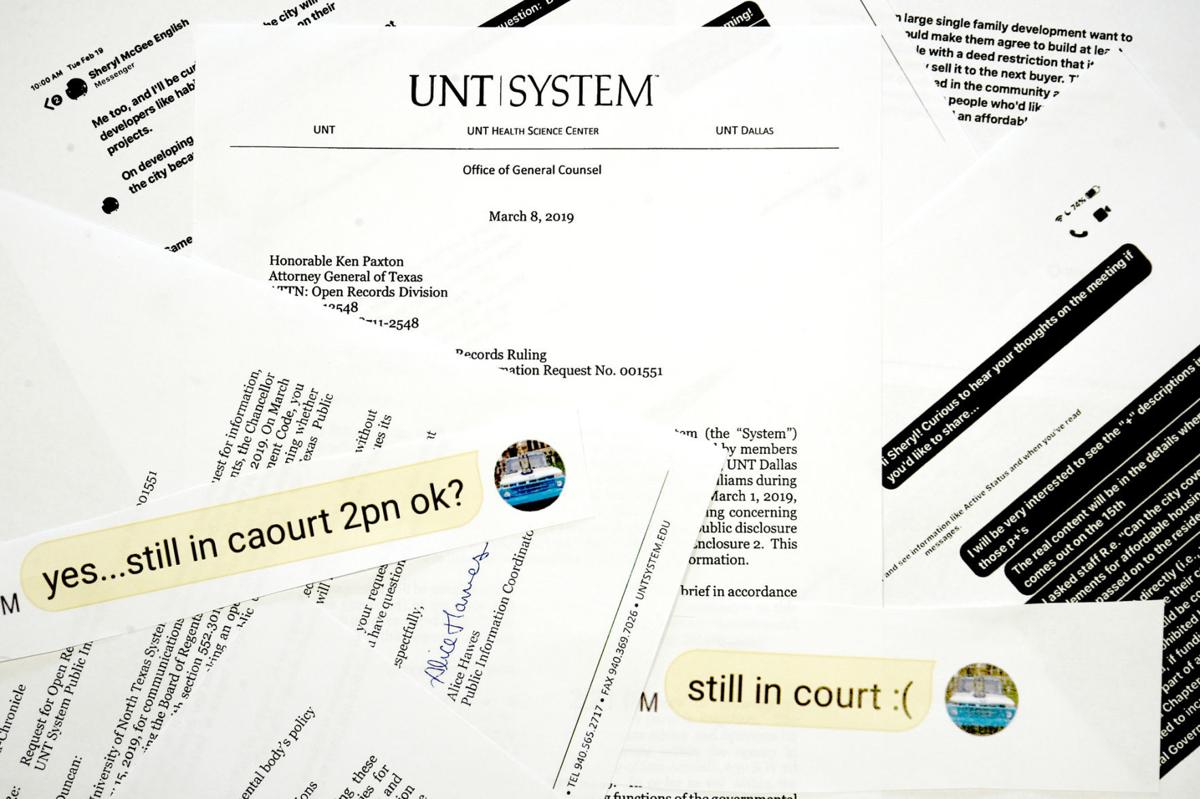 State, county, school and city officials had varying responses to a recent open records request by the Denton Record-Chronicle for copies of texts and instant messages. 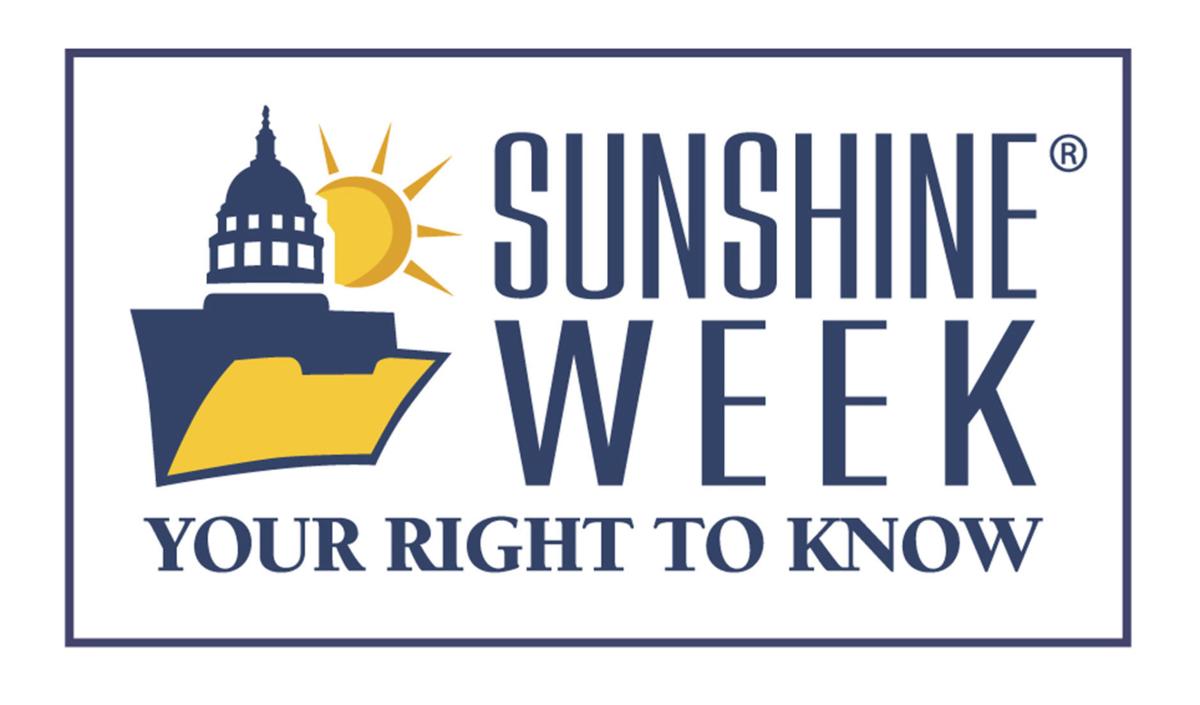 State, county, school and city officials had varying responses to a recent open records request by the Denton Record-Chronicle for copies of texts and instant messages.

Some elected officials text or use other instant messaging services, such as Facebook Messenger — even during public and closed meetings. It can be a quiet, reliable way to get a short message to a family member or co-worker, or to communicate in real time with a constituent.

But just like any other letter, or email, or fax, when the official’s correspondence is related to government business, those texts are typically part of the public record.

As part of Sunshine Week, the Denton Record-Chronicle requested text messages from more than 30 local elected officials and executives. Sunshine Week is a nationwide initiative that calls attention to the importance of open government and public records laws. It is sponsored by the American Society of Newspaper Editors and the Reporters Committee for the Freedom of the Press.

What we asked for

We limited our requests to public meetings we covered the week of Feb. 11-15. We requested all messages sent or received during the window of time when the public body was in executive session. In other words, we asked for messages that occurred when officials were behind closed doors.

For the Denton City Council, that was a 90-minute window Tuesday afternoon, Feb. 12, when the council and city manager were briefed on an employment discrimination complaint brought by a former planning department employee.

We asked for texts and other instant messages, including email, from all seven council members, City Manager Todd Hileman and City Attorney Aaron Leal.

The University of North Texas System Board of Regents and UNT President Neal Smatresk went behind closed doors for a little more than an hour and a half on Thursday, Feb. 14. They were briefed on plans to purchase, or acquire by eminent domain, four business properties on Avenue C and nearby Kendolph Street. They also took up three other items: personnel matters, litigation and security devices.

We asked for texts and other instant messages from the eight regents who were present, the system’s three university presidents and System Chancellor Lesa Roe.

The time window for the Denton County commissioners and the Denton school board was a little longer.

In a three-hour executive session split by a one-hour lunch break on Feb. 12, Denton County commissioners mulled over an incentive offer for a business potentially moving into Precinct 4 and whether to purchase a piece of land, according to the court’s agenda. They also evaluated two county employees, including Elections Administrator Frank Phillips.

We asked for text messages from all four commissioners and County Judge Andy Eads.

For the Denton school board, the window lasted nearly two hours on Feb. 12.

According to the meeting agenda, board members consulted with their attorney, Randolph Stout, about real estate property arrangements and deliberated over the appointment, employment, evaluation, reassignment, duties, discipline or dismissal of a public servant or employee. Denton school board members didn’t vote on or discuss anything from their closed session after returning to the open meeting.

We asked for text messages from all seven school board members and Superintendent Jamie Wilson.

What we got: city edition

City officials released both the metadata and the emails that were both sent and received on city accounts. In addition, council members were asked to turn over their individual texts or other instant messages.

In other words, city officials are on the honor system for texts or other instant messages that aren’t created on city accounts.

In all, the city released about 90 pages of communications and withheld two, claiming privileged documents were sent to council member Deb Armintor and Deputy City Manager Bryan Langley.

Many emails happened to be sent to city leaders during that time frame, and most were left waiting for a response. In addition, Hileman and Leal used their email accounts to summon staff members to the meeting or decide when to order dinner.

Armintor was the only council member to release texts. She was finishing a conversation with a constituent on Facebook Messenger as the closed-door session began. She captured the entire conversation and emailed the images to her city email at the time to create a record.

Armintor had seen Sheryl English, a local real estate agent and a member of the Denton Housing Authority board, attend part of the council work session earlier in the afternoon. Armintor reached out to English for feedback, since the council didn’t take public comments during the work session.

“I always like to know,” Armintor said. “I’ll accept public comments during the meeting, too.”

Sometimes people advise her not to put so much in writing, but Armintor said she wants the record so that she can remember what happened.

“I don’t write my innermost thoughts — that would be stupid. I know that anything can be FOIA’d,” Armintor said, referring to records requests. “But I like texting in real time.”

She said she developed her habit of sending emails to herself as an English professor at the University of North Texas.

Armintor may be the exception there. State open records laws require preservation of government records. If elected officials don’t archive texts or other instant messages, that record could disappear.

What we got: UNT edition

The long and short of it is: Not much.

Minutes after the request was submitted to Paul Corliss, the chief communications officer for the UNT System, he replied and copied UNT attorney Renaldo Stowers and paralegal Alice Hawes.

The state allows government entities 10 business days to respond to requests, but by the end of business on the 10th day, Friday, March 1, UNT had not sent any documents to the newspaper.

We followed up Wednesday morning, March 6, asking for the status, a full 13 business days after the initial request. At 5:44 p.m., Hawes apologized for not sending a copy of a notice UNT sent to the Texas Attorney General’s Office to challenge the release of the communications.

The notice included boilerplate language: “The System submits that certain information responsive to this request is excepted from public disclosure under Texas Government Code section 552.11.”

On March 8, UNT argued to the Attorney General’s Office that the exemption applies to protect advice and opinions on policy matters, and the communications had “frank opinions and recommendations about topics that are central to the university’s education mission and value.”

UNT redacted the line of sample communications in its copy to the newspaper.

What we got: County edition

A key reason for conducting this simple test was to gauge how officials react when they are asked to turn over public information — and the Denton County Commissioners Court put on its dancing boots.

With two exceptions, officials turned over only communications they received. All of the commissioners except for Coleman said they did not send any messages during the time period requested.

In a Feb. 24 email, Commissioner Dianne Edmondson wrote to John Feldt with the District Attorney’s Office: “Andy [Eads] said I should forward you my incoming emails which fall within the Feb. 12 time frame listed. There are four and I will forward each to you.”

The newspaper is drafting a complaint to the Texas Attorney General’s Office about the possible omission of records of communications that were sent, something citizens also can do when they believe their requests for public information have not been met.

The original request to Denton County commissioners was sent to Dawn Cobb, the county’s official public information officer. Information officers routinely receive requests and relay them to the departments and officials who are subject to the request.

Cobb responded Monday morning, saying she was not the custodian of the records and that the requests would need to be sent individually to each commissioner.

Yet Commissioner Coleman called the newspaper within hours of the initial request to ask about it. Coleman began turning over the records even before Cobb’s response.

We mentioned this in a follow-up email to Cobb but received only an out-of-office auto-reply.

Coleman turned over communications that were related to county business but withheld messages related to his law firm because they involved potential clients.

He challenged the newspaper’s request with the Attorney General’s Office, arguing the public is not entitled to have that information because it involves potential clients — even though he was ostensibly texting potential clients during a closed-door session with fellow county officials.

Coleman said on Friday that he separates his personal business from county affairs by keeping his own laptops in his county offices. He said he uses a county cellphone and his personal cellphone.

County Judge Eads and Commissioner Edmondson did not send or receive a single text message during the three-hour period, according to the response to the records request.

Commissioners Bobbie Mitchell and Ron Marchant also didn’t have much to say digitally. Neither official had either inbound or outbound text messages or emails to report, according to the response from the county officials.

What we got: school district edition

On Feb. 26, 11 days after the request was made of the superintendent and school board officials, Kim Stevenson responded with a collection of emails received by Superintendent Jamie Wilson. Stevenson is executive assistant to Wilson and Denton ISD’s custodian of records.

She said the district’s technology department didn’t find any emails sent by Wilson or the board members.

Emails to Wilson covered three topics: expanded course offerings through a partnership with UNT, an upcoming survey on culture and climate, and the impact of fast-growth school districts, including Denton ISD, on students.

She did not, and has not, provided any texts or other instant communications.

She explained in her Feb. 26 email: “The District does not have the ability to track Trustee or Staff cell phone communication such as text messages since these are their own personal devices.”

Stevenson responded Friday evening with a spreadsheet showing the name of each board member alongside the word “none,” indicating that no text messages were sent or received by any of them during the closed session. The table did not include Wilson, though he was mentioned by name in the formal request for information dated Feb. 15.

Attorney and Texas open records expert William Aleshire said tweets, texts, emails and any other form of communication about official business are “absolutely covered” by the Texas Public Information Act, which makes it a crime to alienate or destroy those records.

In other words, whether the communication was created on a public official’s private device doesn’t matter. If the communication is about public business, it’s a public record. The problem for Texas is that the enforcement provisions in the act have been weakened in recent years, and the local government code has no enforcement provisions whatsoever.

A member of the public can sue for records under the act, but a governmental body has discretion whether to sue an individual member to turn over records in their possession.

“Transparency is on its deathbed in Texas unless the Texas Legislature intervenes,” Aleshire said.

“As a custodian of a public record, you are supposed to protect it from being deleted, alienated or destroyed,” Aleshire said. “Records can be deleted by the normal operations of an app, or deliberately, and no one enforces it.

“Officials know they can get away with writing texts and emails in secret,” he added. “It’s a mess.”