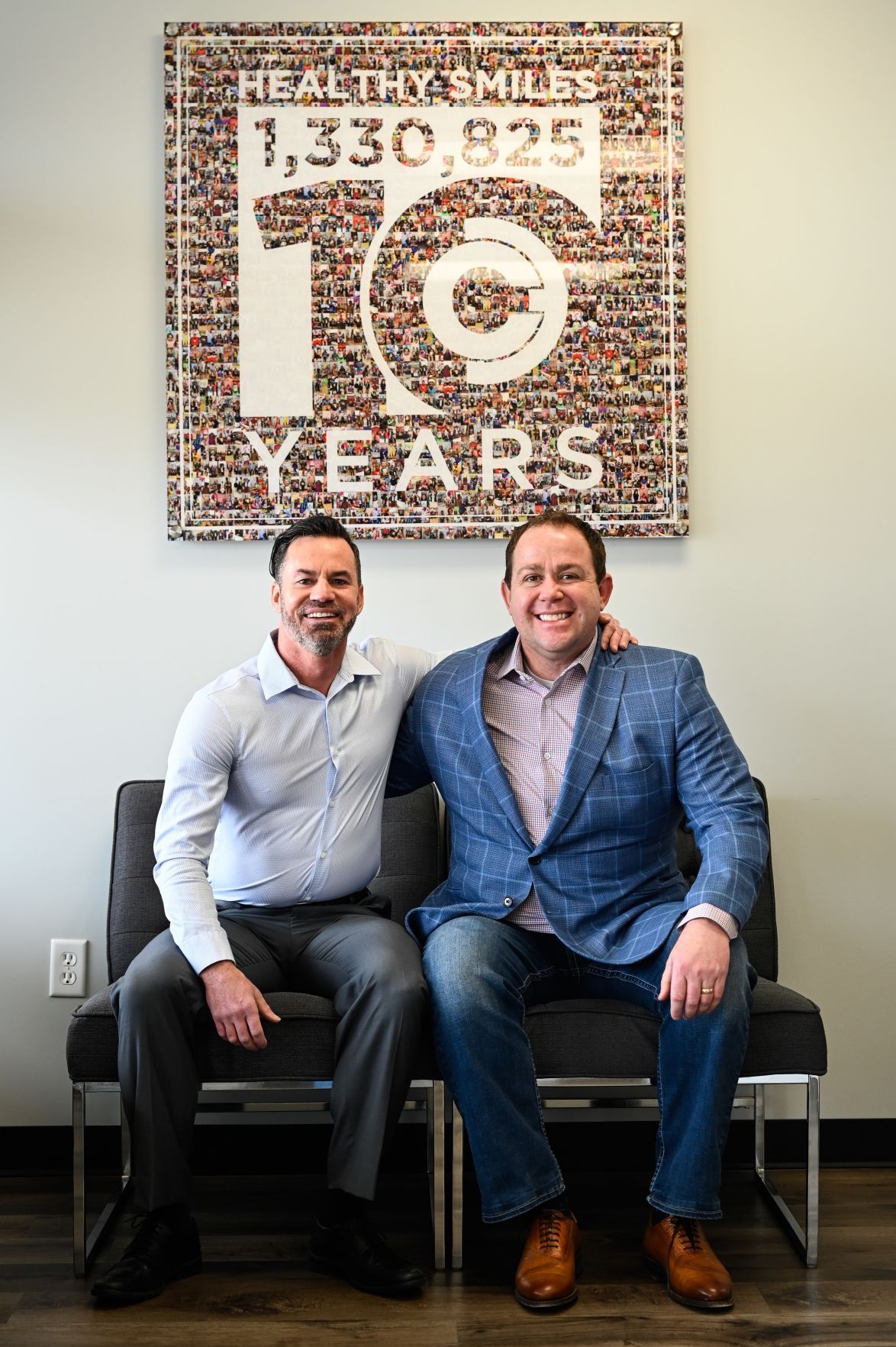 Chad Evans, left, and Emmet Scott are the founders of Community Dental Partners, which aims to help dentists focus on dentistry rather than human resources, accounting and other bookkeeping necessities, 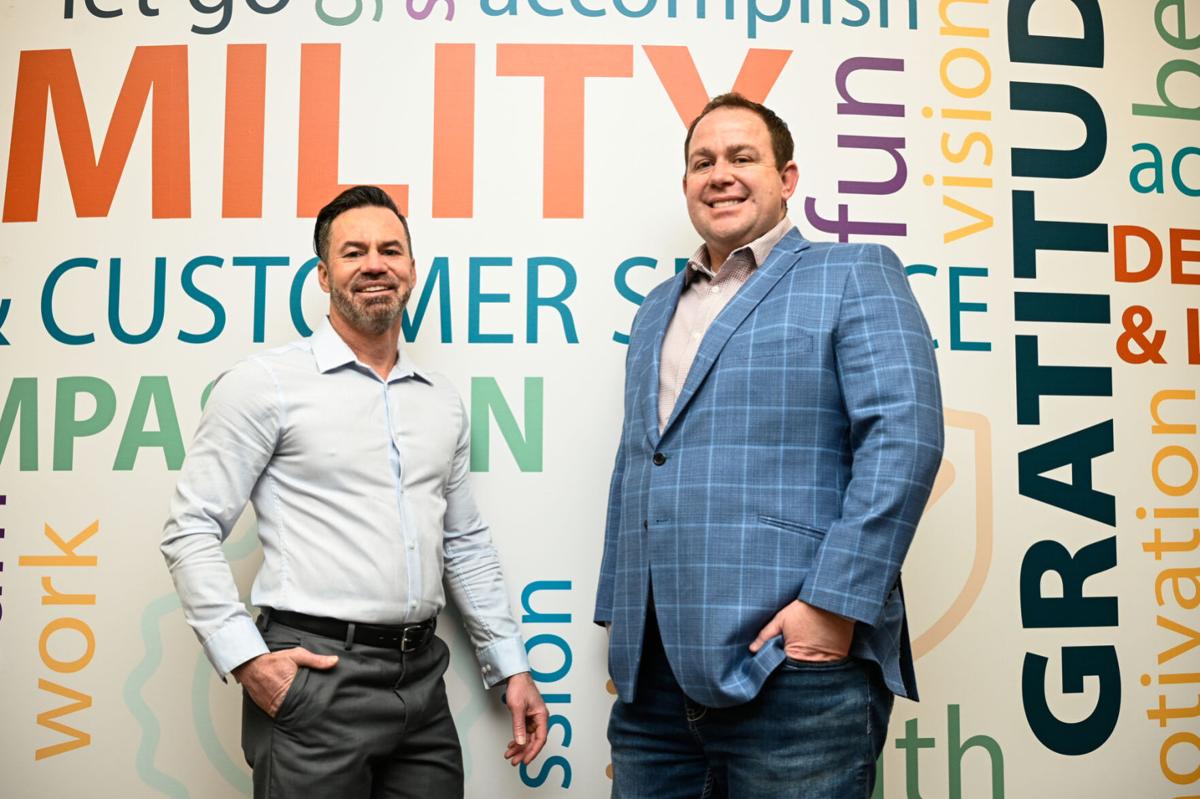 Chad Evans, left, and Emmet Scott are the founders of Community Dental Partners in Denton. The childhood friends have grown their practice into a statewide enterprise.

Chad Evans, left, and Emmet Scott are the founders of Community Dental Partners, which aims to help dentists focus on dentistry rather than human resources, accounting and other bookkeeping necessities,

Chad Evans, left, and Emmet Scott are the founders of Community Dental Partners in Denton. The childhood friends have grown their practice into a statewide enterprise.

Chad Evans and Emmet Scott have known each other since they were 2 years old. After 30 years of separation, the childhood friends reconnected and opened a dental practice in Denton — which has grown into a statewide enterprise.

When Evans and Scott opened Smile Magic in 2010, they had one location and 19 employees. A decade later, the duo now employ 700 across the state and plan to see over 250,000 patients at their 60 supported locations this year.

Evans’ dad and Scott’s mom went to high school together and bought houses next to one another as newlyweds. Though Scott’s family moved away when he was 9 years old and the two lost touch, eventually going to separate colleges — Evans to dental school and Scott to study accounting and business — Scott said he was always confident they would reconnect.

“I told him someday we would see each other again, and it happened to be 30 years later,” Scott said.

Evans, who always planned to be a dentist — he had been working in his dad’s dental lab making crowns and bridges when he was 11 years old — was looking to open his own practice in Denton. But he wanted to focus on patient care and dentistry, not the business side of opening a clinic — so he called his old friend, Scott.

“What I recognized and realized for myself personally, and I think generally within the dental space, is most dentists don’t do a very good job of getting the business support in place that they need to run a successful business,” Evans said. “They might be fantastic clinicians and be fantastic dentists — they might do beautiful crowns and beautiful veneers — but usually their business practices are pretty bad.”

Evans has done mission work in Chile, and together, Evans and Scott have 13 children — Evans seven and Scott six — so the two set out to create a practice focused on children and underserved populations, Scott said. Inspired by what they thought their own children would enjoy about visiting the dentist, they created a practice that included a movie theater and play gym, where children are called princes and princesses, receive gold coins and stickers, and get crowned for bravery at the end of their appointments. Each operatory is also a different page from a storybook about “the brave adventures of Charlie the Chipmunk,” Scott said.

"I wanted moms to have to drag their crying child out of the dental office because they didn’t want to leave. I can say we’ve achieved that."

The practice saw around 1,000 new patients in the first three weeks of opening, which Scott said is indicative of the demand for a dental clinic like Smile Magic.

“The patients that we choose to take care of are generally the ones that most health care providers, most dentists are not interested in,” Evans said.

That demand also extended to other dentists like Evans who wanted to focus on dentistry rather than human resources, accounting and other bookkeeping necessities, Scott said. So the duo founded Community Dental Partners, which helps both new and established practices curate patient experiences and handle the business of operating a clinic. Staff at CDP, which is also located in Denton, help support dental practices across the state, with locations in El Paso, Laredo, San Antonio and beyond.

While CDP primarily supports Smile Magic and Family Smiles brands, with about 15 or 20 locations each, many others are private practices. Not every location has a Charlie the Chipmunk, Scott said — CDP helps clinics create a patient experience based on their needs.

While the pair say they didn’t originally anticipate helping coordinate care outside their own practices, requests from like-minded dentists blossomed into CDP, which they feel is evidence of the need for greater clinician — and patient — support.

The focus on mission has also created a unique climate, with all practices in the CDP network being built around nine pillars that enhance the sense of purpose for clinicians, Scott said. A group of clinicians recently took their first trip to Honduras since the pandemic to service those who have had barriers to gaining access to care.

That focus has allowed CPD to thrive even during the pandemic. As clinics have faced more logistical hurdles with increased safety protocols, many are looking to bring in help to manage things, Scott said. CPD plans to double its revenue to over $100 million in 2021, and Denton’s Smile Magic, located in a commercial strip on East McKinney Street, will get a facelift in the form of a standalone building adjacent to its current location. The goal is to have the clinic in the new space by the end of the year, Scott said.

Whatever comes next, Evans and Scott say they will continue to focus on patient-centered practices that are just as rewarding to visit — for patients of all ages — as their first.

“Our initial focus was kids, and since then it’s really kind of the whole family, but one of the things I always used to say early on is, most moms have to drag their crying child to the dental office, and I always kind of wanted the opposite,” Evans said. “I wanted moms to have to drag their crying child out of the dental office because they didn’t want to leave. I can say we’ve achieved that, and that’s really rewarding — it’s been really fun to see.”