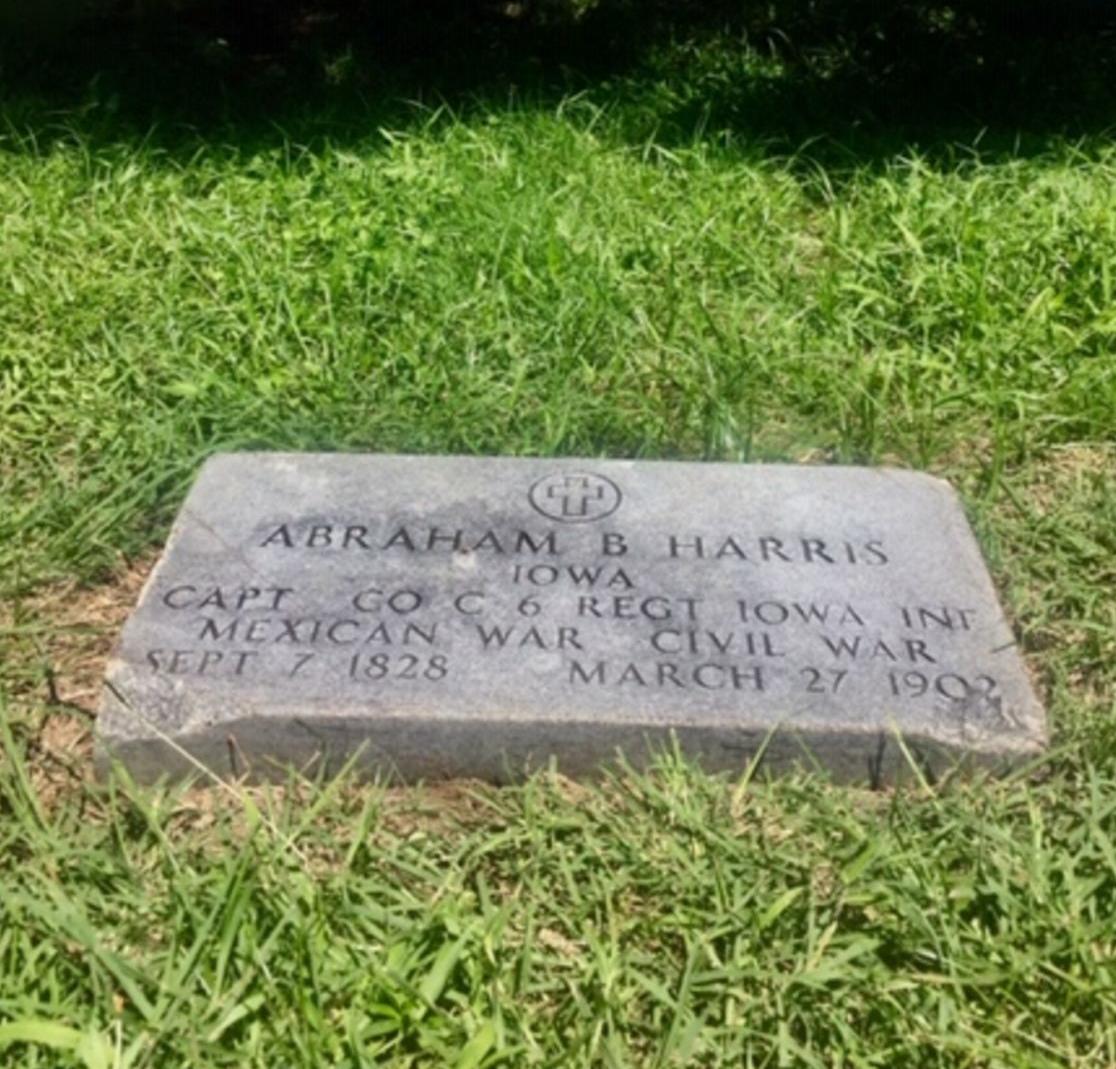 Abraham Harris, a Mexican-American War and Civil War veteran, is buried at IOOF Cemetery in Denton.

About 600 veterans are buried in Denton’s IOOF and Oakwood cemeteries; Abraham Byron Harris is one of them.

His grandfather, James Harris, was an American Revolutionary War minuteman, a colonist ready to fight at a minute’s notice in 1776. Military heritage made it logical for 19-year-old Abraham to volunteer for the Mexican-American War in 1846.

Abraham witnessed history firsthand, enlisting in the 3rd Ohio Volunteer regiment in January 1846 for one year’s service under Gen. Zachary Taylor. Abraham’s unit traveled by boat down the Mississippi River to New Orleans, crossing the Gulf of Mexico to Brownsville to occupy northern Mexico.

The Ohio volunteers stationed in Matamoros, Mexico, in the summer of 1846 faced volatile tensions on both sides of the border. Abraham and fellow volunteer soldiers did their job better than most of Taylor’s men, earning praise from the mayor for peacekeeping efforts.

Mexican Gen. and President Santa Anna, whose popularity rose and fell with Mexican citizens, was a better president than general. His leg was amputated after injuries sustained in the Pastry War; vanity was his downfall.

Abraham’s regiment moved with 6,640 men under Taylor’s command to Camargo to protect military supplies in Monterrey and Saltillo, Mexico, in February 1847. The Ohio regiment was unaware of fighting in Monterrey. Their commitment ended, and they were dismissed.

In 1848, the Illinois infantry surprised Santa Anna, seizing his cork and wooden prosthesis as a trophy. Other troops fought in Mexico City. Legend says a U.S. Marine in Mexico penned the “Marine Hymn” referring to “the halls of Montezuma.”

Abraham became an Ohio farmer. He married Eliza Jaques in 1849. They had nine children; five survived to adulthood.

When the Civil War started, 33-year-old Abraham joined the Union Army infantry as a first lieutenant. He was promoted to captain after facing heavy fire in the 1861 Battle of Shiloh. In 1862, he fought battles in Arkansas and Jackson, Mississippi, and was wounded and discharged in 1863. His regiment went on to fight at Vicksburg, Mississippi, and the Lookout Mountain battle at Chattanooga, Tennessee.

By 1880, Harris and his family were farming in Denton with four of their surviving children.

Their oldest daughter, Mary Alice, married Thomas Alred in Denton in 1885. She died in 1891 and was buried in the Alred family plot at Denton’s Oakwood Cemetery.

Eliza died at age 73 in 1898. Abraham Harris was elected to the International Order of Odd Fellows and became vice president of the Mexican War Veterans Association. He died on March 27, 1902, and is buried at IOOF Cemetery in Denton.