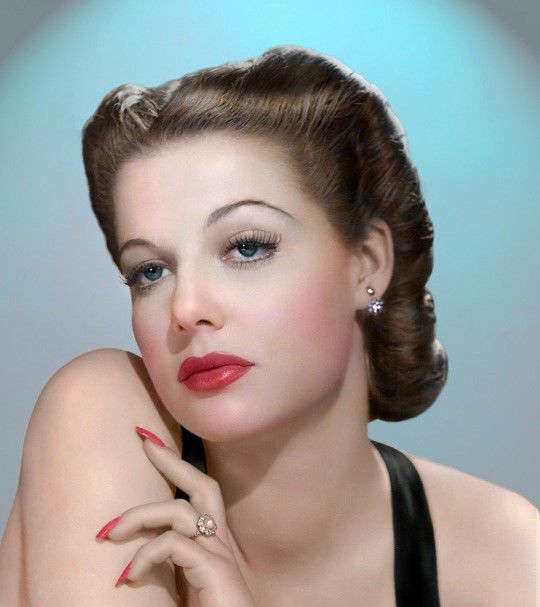 In 1934, Clara Lou Sheridan flew into a rage and drove from Denton to Dallas to confront Dallas Morning News Editor John Rosenfield for printing her picture as a finalist in the Paramount Pictures Search for Beauty contest. Her sister submitted her picture without her knowledge.

But Sheridan won, and she and her family left for Hollywood to claim her prize — a bit part in Search for Beauty.

Beauty got Ann Sheridan to Hollywood, but hard work and talent kept her there.

Red hair and hazel green eyes got Sheridan noticed, but personality made her a Hollywood favorite. Director Mitchell Leisen got her scenes in Behold My Wife! Her character committed suicide in the movie and joked it was because she was under contract to Paramount. Actresses had to follow elaborate rules, including dates arranged by the studio and being seen regularly at nightclubs. Studio bosses shortened Clara Lou’s name to Ann Sheridan to fit a movie marquee. Sheridan’s only vice was heavy smoking, which was considered cool in the 1930s.

Paramount Studios’ 1937 contract paid Sheridan $4,200 per year. That year, Fred Astaire made $211,166, and Ginger Rogers made $124,776. Sheridan made 40 B-movies. “I used to go to Grauman’s Chinese and sit there waiting to see my faceless body on the screen,” she said. “Texas began to look awfully near and awfully good, and Clara Lou had a sweet sound to my ears.”

“I did some things on loan-out to Universal that were a bit better and where I said something besides he-went-that-a-way,” Sheridan said.

Cagney and Bogart became close friends, coaching Sheridan on how to handle the studio, so she was often under suspension for refusing roles. “I had to fight for everything,” she said. “You didn’t always win, but you let them know you were alive.”

In 1939, Sheridan was named Max Factor Girl of the Year, the same year a locksmith rushed to a movie premiere after a UCLA fraternity member handcuffed himself to her. After journalist Walter Winchel said Sheridan had plenty of umph, 25 movie executives voted her the Oomph Girl. She soon got 250 marriage proposals, but she loathed the title that objectified her.

NTSTC students hanged the Harvard Lampoon in effigy after the publication named Sheridan the actress most unlikely to succeed. Students refused to come down from a tree strike until economics professor and Harvard alumnus Dr. Conrad apologized on Harvard’s behalf.

Her first starring role was in It All Comes True, a 1940 musical comedy where Humphrey Bogart watched Sheridan sing “Angels in Disguise” backed by a barbershop quartet and a chorus of waiters. Commenting on her own versatility, Sheridan once said, “I can whistle through my fingers, bulldog a steer, light a fire with two sticks, shoot a pistol with fair accuracy, set type and teach school.”

The 1940s was Sheridan’s best decade. Dodge City, in early Technicolor alongside Errol Flynn and Olivia de Havilland, was one of the highest-grossing films of 1940. King’s Row, with Ronald Reagan, was her most acclaimed and her personal favorite that garnered Sheridan the 1942 National Board of Review Best Actress award.

A messenger delivering script changes to Ann’s movie lot bungalow found her reading the paper with her feet up, sipping a beer. Noticing his shock at seeing her generous foam bra padding in the trash can, she raised an eyebrow and said, “I’ve got to put it somewhere, and it wouldn’t fit in the toilet.”

Don Staples, UNT professor emeritus and expert in film history and film criticism, said Sheridan was a great actress who never got her just deserts. Along with Kings Row and Dodge City, he cites I Was a Male War Bride, a comedy with Cary Grant, as examples of her work.

Sheridan didn’t tell anyone, including her husband or the sister she cherished, about her advanced esophageal cancer. Although she was as beautiful as ever, she looked pale and gaunt. The Pistols ‘n’ Petticoats television show cast and crew didn’t know she went home each night to recover. She died in January 1967 at age 51 at her home in California. Her last words to her husband, Scott McKay, were “I’m going to be all right.” The next to last episode of Pistols ‘n’ Petticoats aired as scheduled the day she died.

Several years before her death, Sheridan was asked to evaluate her place in film history. “There’s no position really,” she said. “It’ll just be one of those things that’s written off, for heaven’s sake. It won’t mean anything.”

During her 33-year career, Ann Sheridan appeared in 76 films, 21 televisions shows, a soap opera and anchored a television show. Her star is on Hollywood Boulevard’s walk of fame.