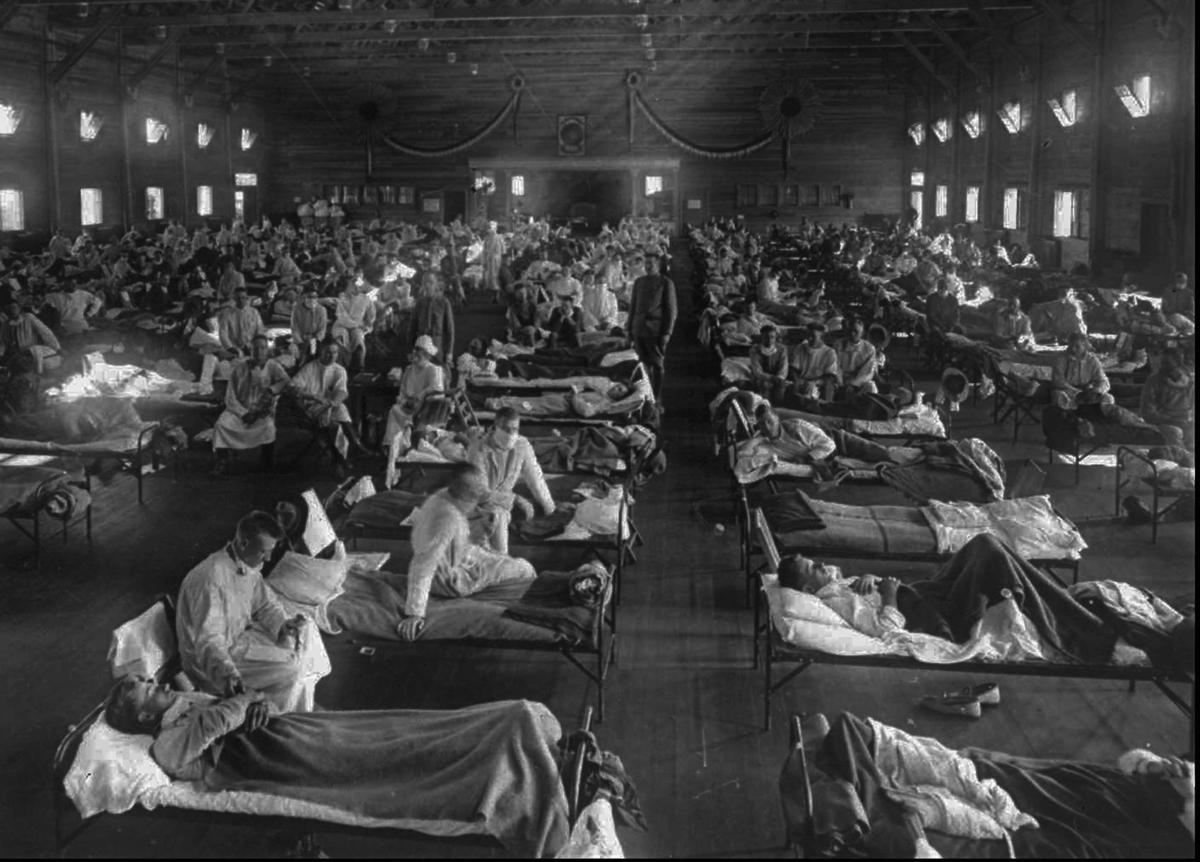 Influenza victims crowd into an emergency hospital near Fort Riley in Kansas in this 1918 file photo. The 1918 Spanish flu pandemic killed at least 20 million people worldwide.

EDITOR'S NOTE: An earlier version of this story included an incorrect year for when the second wave of Spanish flu hit Denver.

“The man or woman or child who will not wear a mask is now a dangerous slacker,” proclaimed the American Red Cross in response to the 1918 pandemic.

Spanish flu, caused by an H1N1 virus, began in Kansas, where farmers burned pig and chicken manure. It spread from U.S. military camps to World War I trenches throughout Europe and back to the U.S. with returning soldiers. Volunteers made and distributed cloth face masks, and newspapers explained how to make them.

Americans wore masks as a symbol of wartime patriotism.

Tuscon, Arizona’s “influenza court” levied $10 fines, a week’s wages, for not wearing masks. The judge refused to allow people to cut holes in them for smoking or to make excuses like “the mask was in the wash.”

San Francisco Mayor “Sunny” Jim Rolph enacted the first face mask ordinance. Spanish flu cases rose from 169 to 2,179 in one October week. That month, 110 people not wearing masks were jailed for disturbing the peace and fined $5. Public health officer Henry Miller shot and wounded James Wisser and two bystanders on Oct. 27, 1918, when Wisser became combative after being asked to put on a mask. Health officer William Hassler and Mayor Rolph both paid fines after being photographed without masks at a boxing match.

Whistles and sirens blew at noon on Nov. 21, 1918, as San Franciscans threw off masks to celebrate the end of a “tortuous month,” but officials reinstated the ordinance after a Dec. 7 flu spike. Influential quarantine-weary San Franciscans started the anti-mask movement. Organizers reported 4,000 people attended their one January meeting, although historians estimate the attendance was 2,000.

Rolph rescinded the mask order in late February. San Francisco had the flu under control, but according to the Center for the History of Medicine, 45,000 cases and 3,000 deaths made it America’s hardest-hit big city.

When the second wave of Spanish flu hit Denver in autumn of 1918, officials implemented a second round of closures. Within hours, business owners formed the Amusement Council to get closures rescinded, although the mask order remained in place.

Public health officials in Omaha, Nebraska, enacted restrictions in mid-October. Although 442 people had died, business owners hated the loss of livelihood. Bank president Ezra Millard complained face masks “would be an inconvenience to our employees and … have a depressing effect on the public.”

Restrictions lifted for the Nov. 11 Armistice Day celebration. A week later, 30 cases and 11 deaths occurred in one day. Many more people died of the Spanish flu, although officials began listing the cause of death as fever or severe cold.

Spanish flu hit the country unevenly in three waves. The first wave began in Kansas and went to Europe with U.S. soldiers. The second wave beginning in late summer 1918 was the most virulent, when most of the 50 million worldwide deaths occurred. The third wave began in 1919, resulting in fewer fatalities because the virus likely mutated and became less lethal. A 2007 Journal of the American Medical Association article concluded school closures, banning public gatherings, limited business closures and face-mask ordinances were critical to mitigating Spanish flu deaths.

The pandemic spiked around Thanksgiving 1918 and after the new year, but officials lost determination to enact ordinances. Most politicians who put restrictions in place wanted to avoid fallout and crumbled after a month.

Public health restrictions, once lifted, are difficult to put back. Despite public health officials’ warnings, politicians believed death was the price of a pandemic. In 1918 and 1919, an estimated 45,000 American soldiers and 600,000 U.S. civilians died of the disease that decreased the average American lifespan by 10 years.