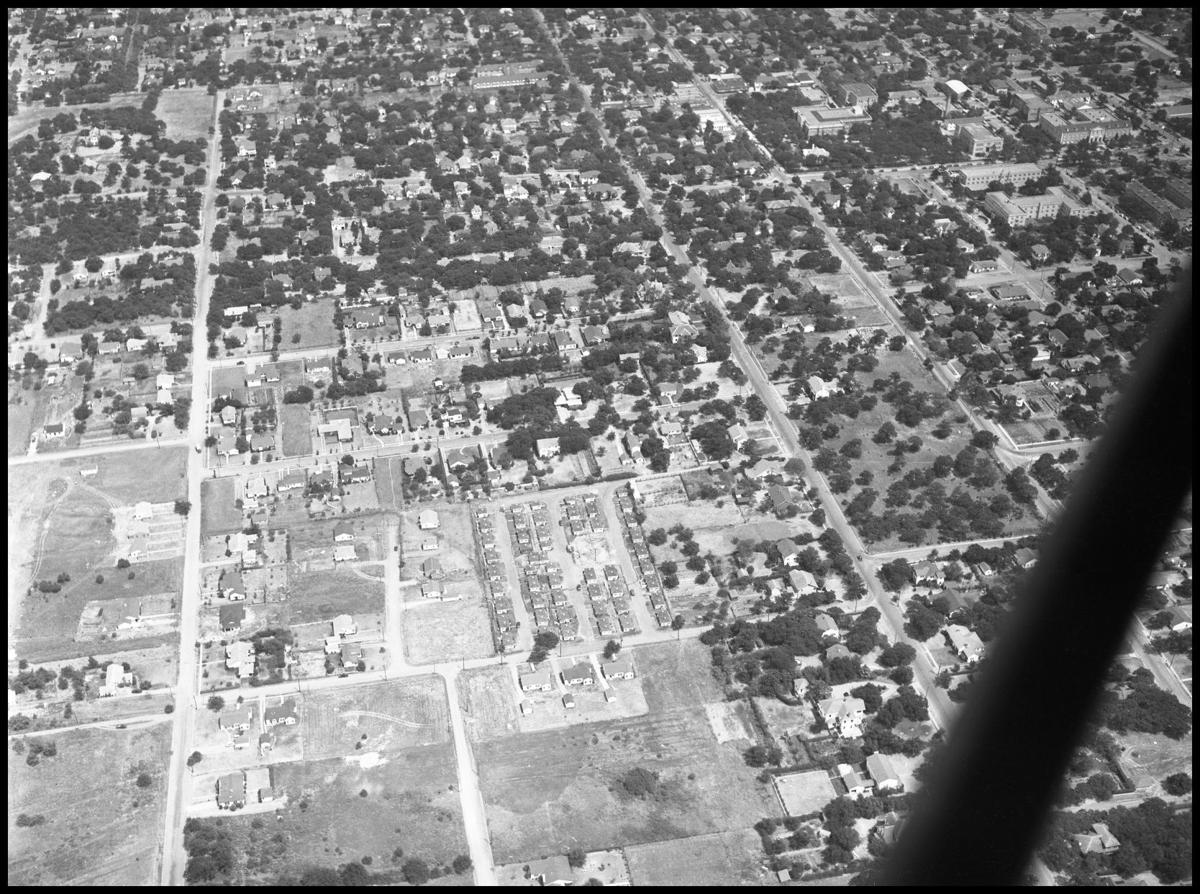 Vets Village is located in the bottom center of the photo, between West Oak and Scripture streets. The Village can be located by looking for the rows of uniform structures.

When Texan Frank Gioviale lost a uniform button during World War II, he found his wife.

After Gioviale’s tour of duty as a medic in France, he moved to Denton to prepare for Tillie and their infant daughter Ruth’s arrival. Frank had majored in music prior to the war at North Texas State Teachers College, now the University of North Texas, even accompanying professor Floyd Graham to Austin to record the state song.

The Giovales were the first wave in a flood of World War II veteran families eager to obtain higher education. To address the resulting housing shortage, NTSTC purchased a three-acre lot at 308 Bradley St. in 1946. The federal government contributed 50 prefabricated Army-surplus “hutments,” stand-alone plywood structures that were a cross between a hut and an apartment with bathrooms, kitchenettes and movable plywood walls.

Thirty families and 20 single veterans moved into hutments, and NTSTC soon had a waiting list. The veterans and 10 wives enrolled at NTSTC college.

Vets Village residents called themselves “villagers.” They developed a close-knit community with special events such as an elaborate Valentine’s Day party in 1947.

NTSTC embraced the villagers. The 1948 Yucca yearbook commented, “He is a veteran of World War II, and now a student, who is more serious, aware of world problems and family matters. He is older, maybe wiser, and his presence affects the campus. In a few years he will be gone into better houses and away from school. He is really an American.”

Villagers elected a mayor and town council in 1949. Denton native William Kamenista was Vets Village’s first mayor. After being shot down during his last mission as a bomber pilot, Kamenista spent a year as a POW before Patton’s Army rescued him.

Few villagers had cars, so bicycles were their main transportation. Because the neighborhood was in a food desert, 29 veterans organized the Vets Village Grocery at 313 Sheridan, giving villagers, faculty and the general public access to canned goods, baby food and dog food.

Vets Village closed after applications declined in 1960. The college razed the hutments and built the Bradley Street Apartments for married students in 1961.

The apartments were demolished by 2006, and the lot is currently vacant. A collaboration between the Texas Veterans Hall of Fame, Denton Parks and Recreation and UNT is discussing turning the land into a park to honor veterans and the park’s role housing veterans.

In a July 1961 Campus Chat student newspaper interview, President James C. Matthews praised the community that was Vets Village, estimating approximately 500 families lived there between 1946 and 1960.