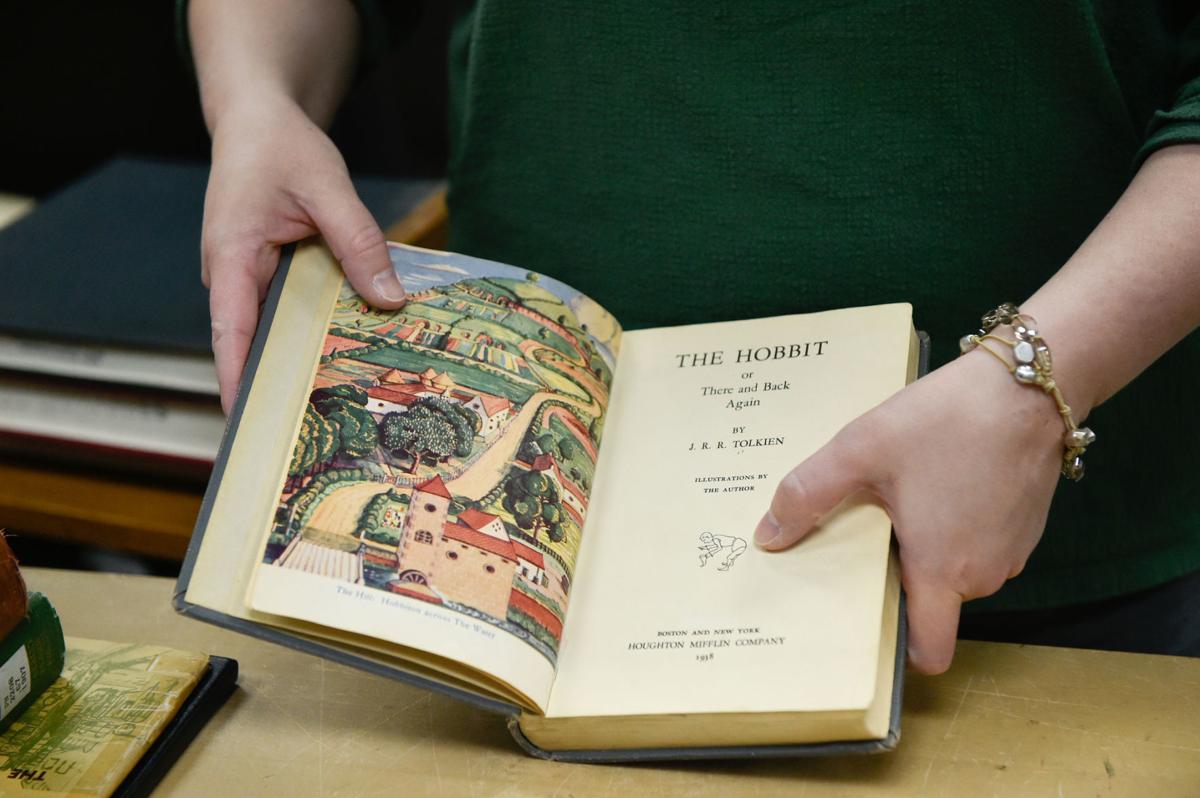 Morgan Gieringer, head of special collections at the University of North Texas’ Willis Library, shows a 1938 first American edition of J.R.R. Tolkien’s The Hobbit on Thursday at the UNT Library Annex. After 45 years, the book was returned to the UNT Libraries anonymously. In the letter with the book, the sender admits to taking the copy in 1974 because they “couldn’t resist it” and with an apology. 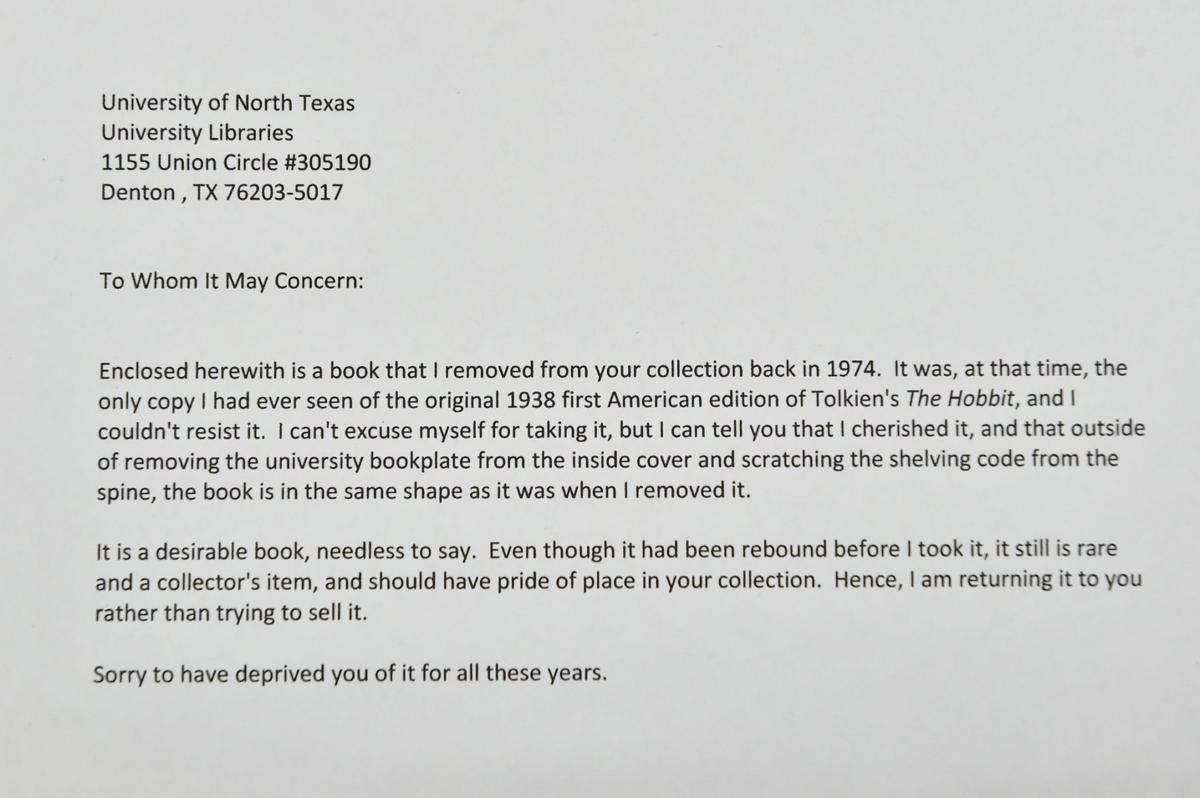 An anonymous letter was sent last month along with a 1938 first American edition of J.R.R. Tolkien’s “The Hobbit,” at the University of North Texas Library Annex. The book was returned after 45 years to the UNT Libraries. 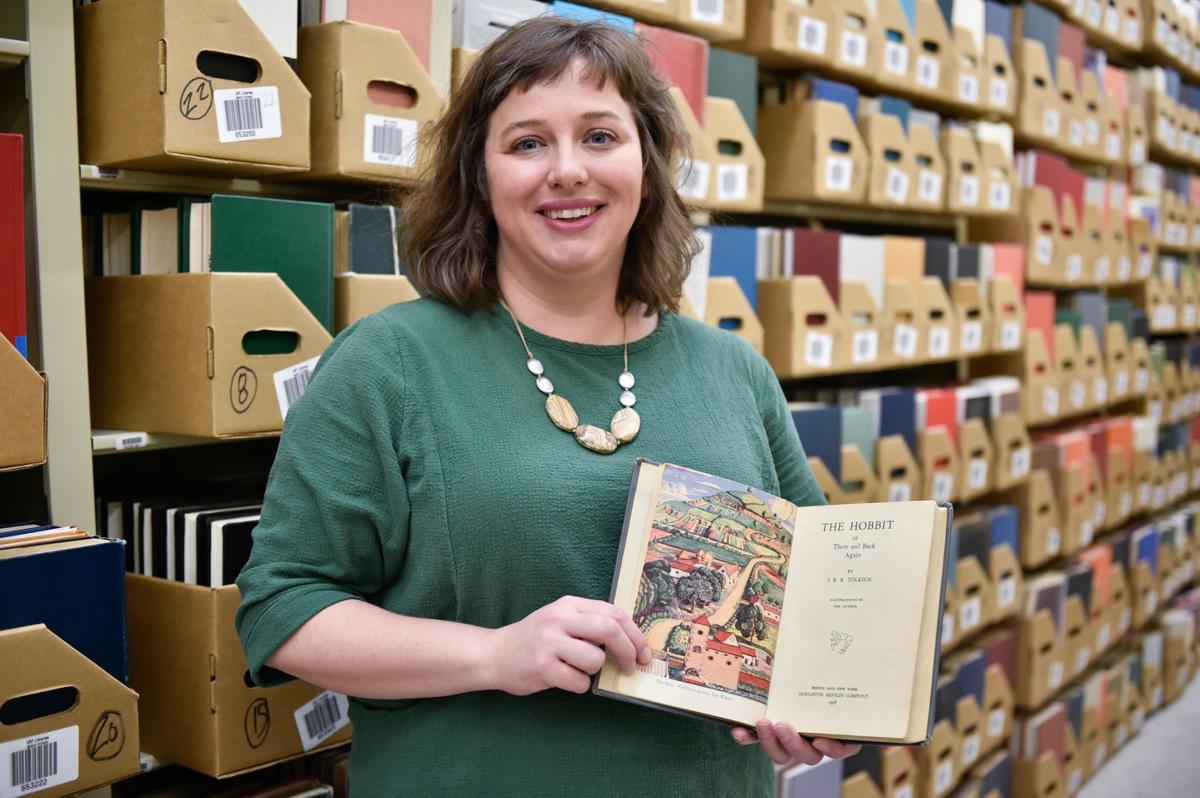 Morgan Gieringer, head of special collections at the University of Texas Willis Library, holds a 1938 first American edition of J.R.R. Tolkien’s “The Hobbit” on Thursday at the UNT Library Annex.

A first printing of the first edition of J.R.R. Tolkien’s classic The Hobbit made its way back to the University of North Texas 45 years after it was removed from the library stacks.

The book was returned from a nondescript address in Oklahoma City with a note enclosed in the package, with an unidentified person confessing to taking the book.

“I can’t excuse myself for taking it, but I can tell you that I cherished it, and outside of removing the university bookplate from the inside cover and scratching the shelving code from the spine, the book is in the same shape as it was when I removed it,” the note read.

An assistant at Willis Library opened the package at the end of March, then escalated it to Laurel Crawford, head of collection development. A lot of times, people return unremarkable books — ones that have weird damage — but in her 14 years working for libraries, Crawford said this package was the most strange.

“It was really unusual, and the story described in the letter really grabbed my attention, and I’m a huge fan of Tolkien, so I was so excited,” she said. “It was exciting and interesting, and I had to bring it to the attention of our experts.”

In April, she passed it off to the rare book experts and heads of collections at the universities and posted about the return on social media.

The book was listed in the library catalog as missing, meaning that librarians noticed it was gone — either by theft or misplacement — and was not checked out, said Morgan Gieringer, head of special collections. Inside the cover of the book, there’s a faded imprint from a stamp that still reads “Denton Teacher’s College, Denton, Texas,” though other identifiers of the books origin were removed.

It’s also in a new binding, which the university must have rebound after they got the book. Originally, it should have had a cloth binding with a dust jacket, Gieringer said. If it still had that, this copy of The Hobbit would be worth $10,000 to $15,000. Without the jacket, the maps in the front and some wear and tear, it’s worth about $800 to $1,000, Gieringer said.

Since it was never checked out, no fines were incurred, and Gieringer said she wouldn’t even know what to estimate the fine. With books that have been gone this long, and are this special, they wouldn’t want to charge fines anyway.

Once the UNT Special Collections Facebook page posted about the book return at the beginning of the week, the library got a call from Julie Rankin, director of library services at Oklahoma Baptist University in Shawnee. In late March, the school also received a package from Oklahoma City with a similar note and three books: U.S. first edition copies of each of the books in the Lord of The Rings trilogy.

“I saw [UNT’s] post on social media, and that’s when I reached out to them to tell them I think we had the same book thief,” Rankin said. “This is one of those things you hear about, but doesn’t really happen to you.”

The OBU library also got something extra: The book thief noted in his letter to the library that he recently went to the OBU library and left a second edition copy of The Return of the King, the third book in the trilogy, as a sign of good will.

The books at OBU and The Hobbit are all under review by library staff now for cataloging.

At UNT, the book will be back in Willis Library on Monday, and will be part of the special collections reading room so anyone can go in and ask to see the book, Gieringer said.

“I don’t think this has ever happened here. I’ve heard stories of books coming back to other libraries after many years, but never anything valuable,” she said. “And I’ve never heard of a book coming back with such a heartfelt letter.”