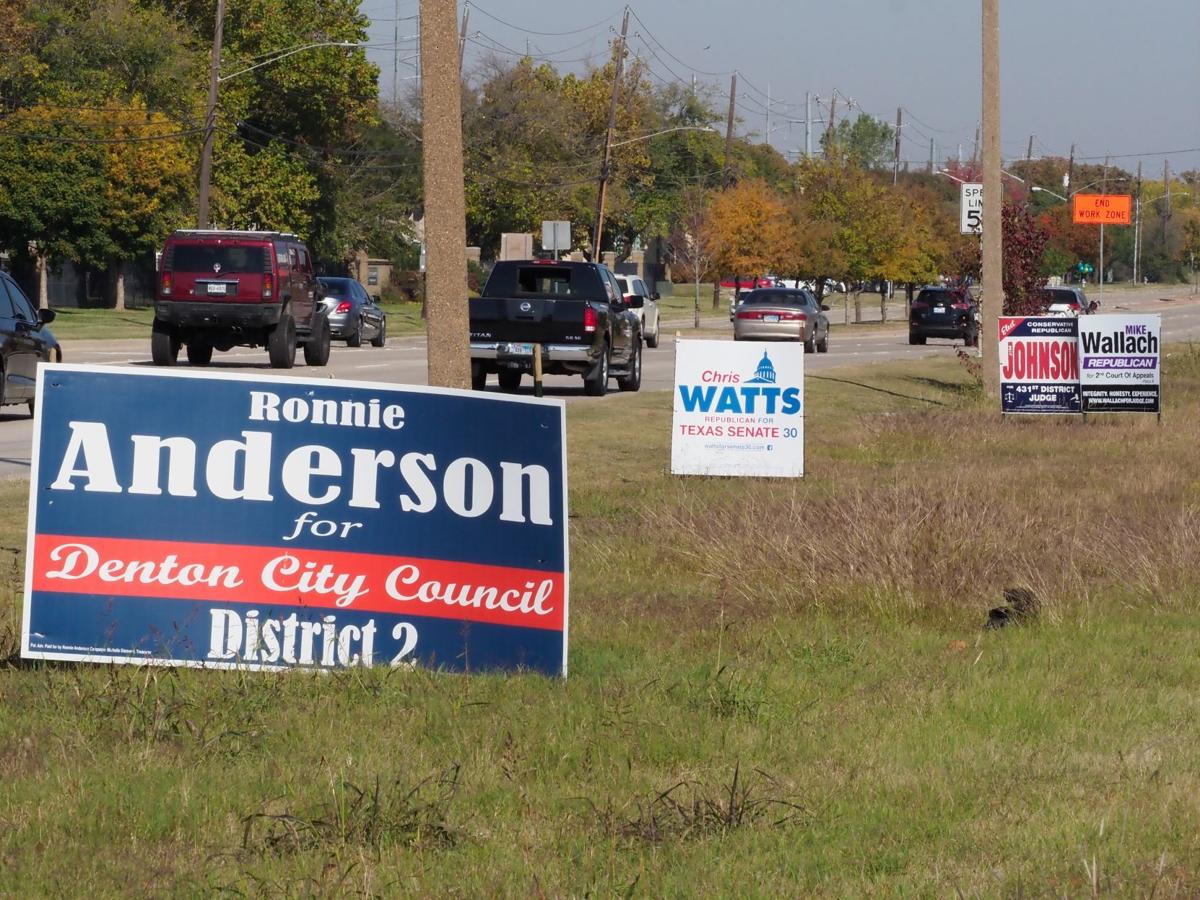 Election signs have yet to be removed as of Saturday near the intersection of Loop 288 and McKinney Street. 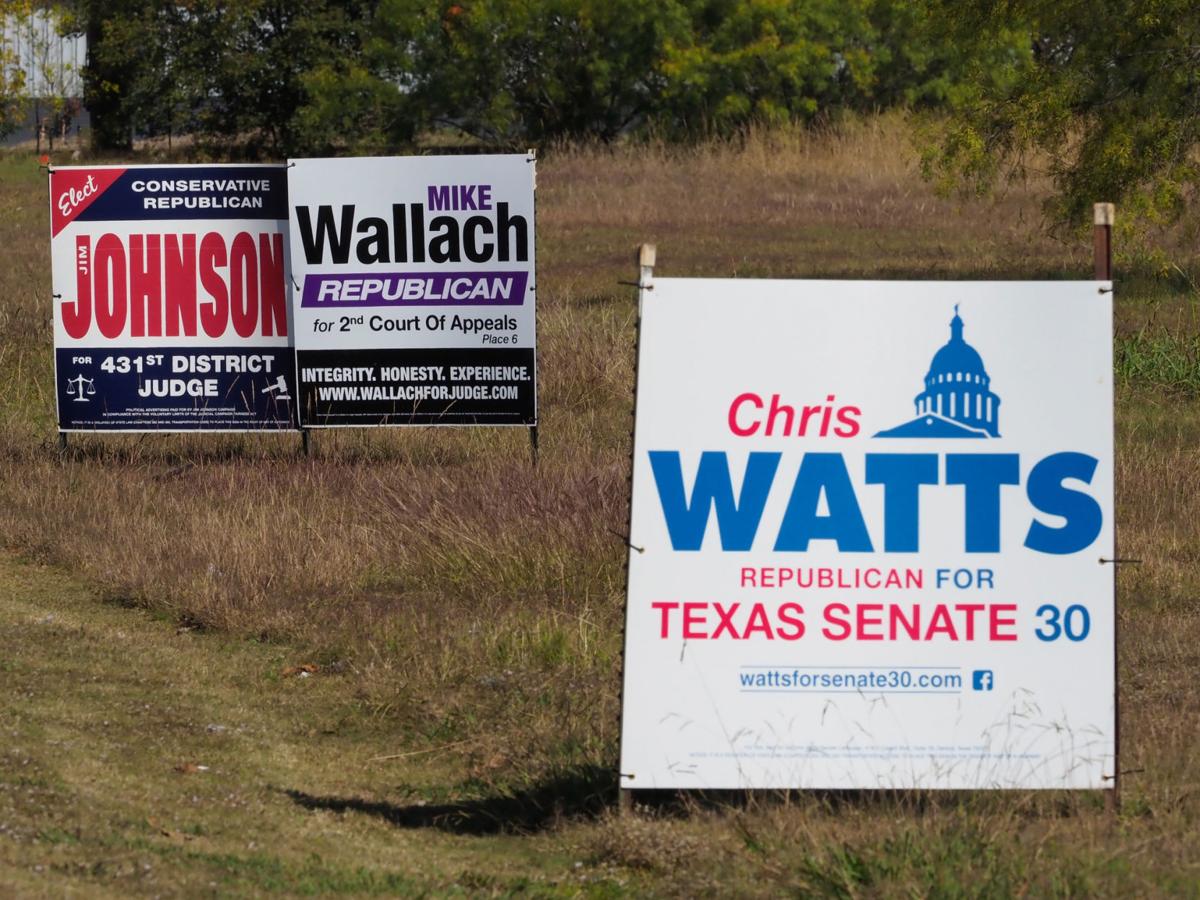 Election signs, seen Saturday, have yet to be removed near the intersection of Loop 288 and McKinney Street.

Election signs have yet to be removed as of Saturday near the intersection of Loop 288 and McKinney Street.

Election signs, seen Saturday, have yet to be removed near the intersection of Loop 288 and McKinney Street.

Though Election Day has come and gone, multiple Denton races heading to runoffs will have the staple campaign signs sticking around for a while longer.

In what has already been a longer-than-normal election season after the city moved its municipal elections from May to November due to the COVID-19 pandemic, residents will continue to see campaign signs as runoff candidates remain in the hunt for votes.

Runoff voting day is set for Dec. 8, with early voting beginning Nov. 23 — in about two weeks. Keely Briggs and Gerard Hudspeth will face each other in the mayoral runoff, with Paul Meltzer and Jim Mann still in the race for at-large Place 6, and Connie Baker and Ronnie Anderson for District 2.

The city informed candidates that campaign signs at Election Day locations were to be removed by the end of Wednesday, the day after the election. Deb Armintor, who won reelection for at-large Place 5 on the Denton City Council without a runoff, said she asked volunteers to pick up her signs at those locations right away, and that she will soon send out a message to any supporters with signs asking to take them down as well, either dropping them off to her or keeping them in the event she runs again.

“Especially with the runoffs going on, we should be seeing those signs for whoever is in them,” Armintor said. “The landscape is pretty cluttered with these multiple races and I don’t want to be adding to the clutter.”

Armintor made use of over 150 signs for this year’s campaign. Although signs are a tradition of election season, she said she doesn’t know how much of a difference they make — but she believes she benefited from anonymous ones calling her “dangerous,” listing her cellphone number and using edited photos of her.

“The honest answer is that I don’t know if they make a difference,” Armintor said. “I suppose it’s good for name recognition.”

The situation is different for Hudspeth, whose mayoral campaign will continue through next month’s runoff. While runoff candidates also needed to remove their signs from Election Day locations like the Civic Center, he said they can go back up Nov. 22, the day before early voting starts. As far as signs in private places, such as from his supporters, he said they will be leaving them up.

Hudspeth has worked with just over 1,000 campaign signs for this election, which makes for logistical challenges between ordering and keeping track of them. In fact, Hudspeth said he has lost around 1% of that number, something he believes most candidates go through. Still, he is optimistic about their impact, especially this year, due to the general election overlapping with the city’s to increase turnout.

“As much as you want to modernize, there’s something to be said for the fact that the 99-year-old Denton resident isn’t on Facebook,” Hudspeth said. “There’s just a component of people that the digital and social media approach doesn’t reach in the same way.”

Hudspeth said using signs effectively can come down to finding the right number — no small task.

“If you see them too often maybe you become blind to them, and if you don’t see them often enough you don’t know they’re there,” Hudspeth said. “It’s a really tricky balance.”

Meltzer, another runoff participant, said via email that signs are still garnering interest from his supporters in the wake of election day.

“We are getting lots and lots of requests for yard signs,” Meltzer said. “People are very energized to make sure we see this reelection effort all the way through to a successful conclusion.”

“We are getting lots and lots of requests for yard signs. People are very energized to make sure we see this reelection effort all the way through to a successful conclusion.”