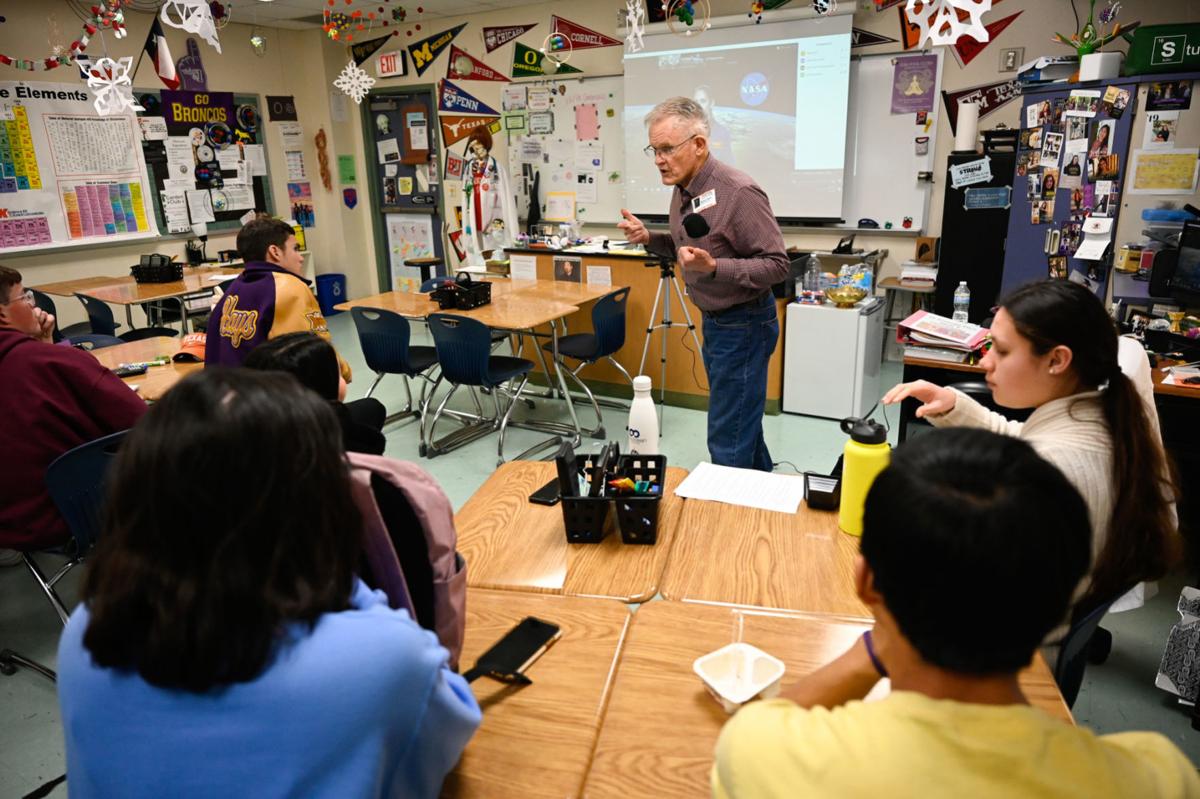 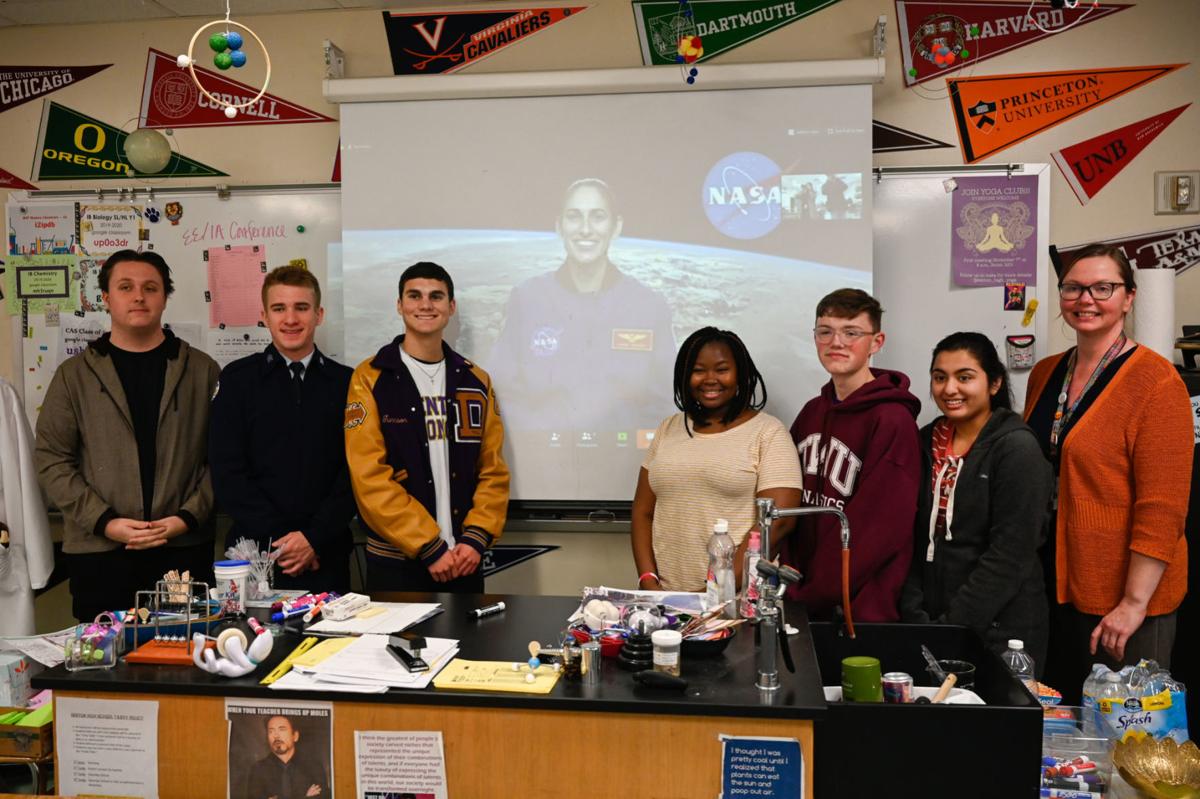 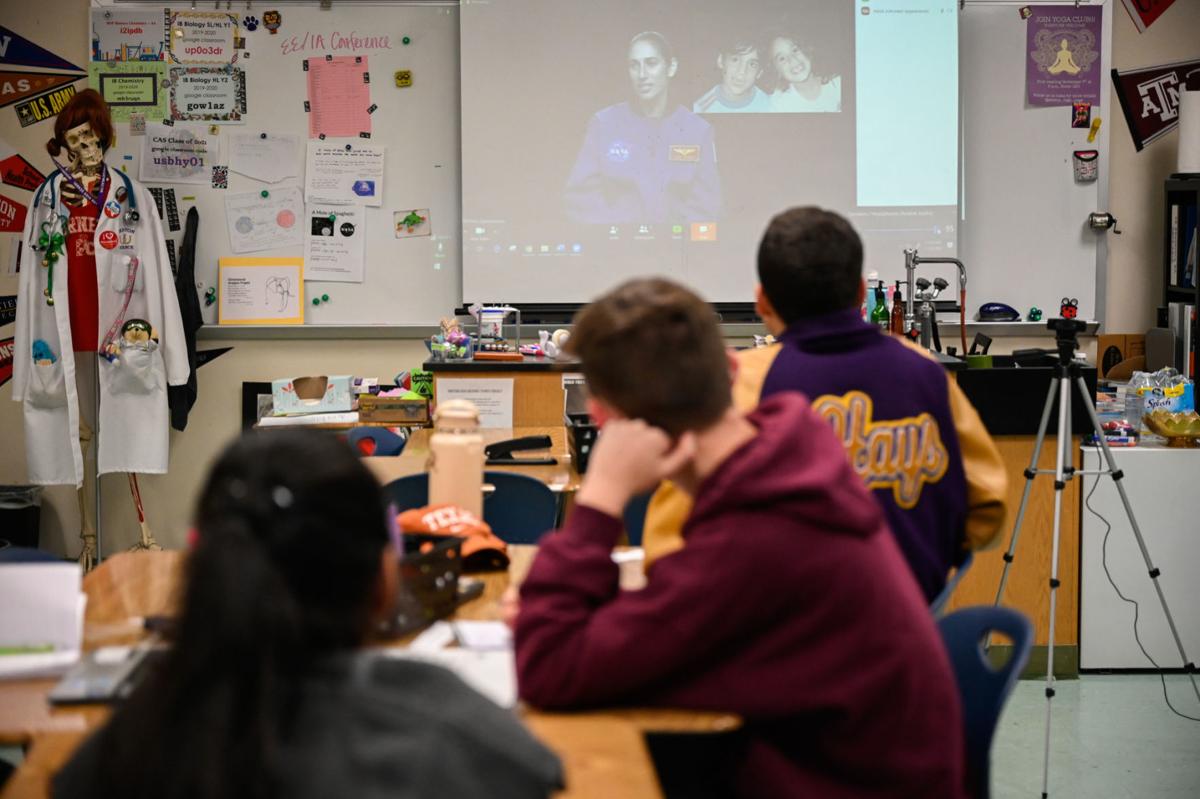 A group of enthusiastic students gathered inside a second floor classroom during lunch Thursday afternoon at Denton High school, where students were introduced to 36-year-old NASA astronaut Jasmin Moghbeli.

Moghbeli was invited as a participant of the Distinguished Speaker Series at DHS, which aims to provide students with critical insight into the experiences of different careers and backgrounds, according to program sponsor Heather Lentz, 48, who teaches advanced chemistry and biology at DHS. The series is in its second year at DHS.

The series has included guest speakers such as Chuck Rosenberg, who served as chief counsel to former FBI Director James Comey and Robert Mueller; Dr. Robert Pitman, a NOAA scientist specializing in killer whales; and Dr. Jessie Christiansen, an astrophysicist and exoplanet researcher for NASA.

During the roughly 45-minute presentation, DHS students listened about the rigors Moghbeli experienced during her time as a student at the Massachusetts Institute of Technology, and in her career as a Marine Corps test pilot and astronaut. For Moghbeli, who graduated recently from the NASA Astronaut Candidate Training Program last month, the successes and accomplishments of her career are more so a reflection of those that believed she could.

“I’ve been very lucky,” Moghbeli said remotely from Houston via Zoom Meetings, a video communications service. “I had a lot of very good teachers throughout the years and several good mentors that were both women and men … My parents were huge, because having them believe I that I could do something was everything.”

As students sat intently at their desks, some were quietly fixated on the projector screen as Moghbeli spoke, while others began to raise their hands with questions ranging from her background as an AH-1 Super Cobra pilot to which obstacle was the most difficult to overcome.

Moghbeli, recalling a moment when she failed her first math exam at MIT, admitted that it was not the first time in life that she failed. But, despite setbacks and occasional failure, she encouraged students to pursue their passion.

“Whatever you do, do it because you were passionate about it and loved doing it,” she said. “There are many different paths to get to where I am, but you have to think it through about what things set you up for success.”

Denton resident Bill Reed, 74, who oversees scheduling of series speakers, initially started the program nearly six-years-ago when it was implemented at the middle school grade level. While the series has continued, it recently transitioned to the high school level, he said, where a better reception has been received among students.

“[The Distinguished Speaker Series] went on for several years from seventh and eighth grade,” Reed said. “But, they were too young to really understand school and their future. High school students are looking at colleges and are looking down the road. So, they are much more open to it and are much more mature about the series itself.”

Denton ISD school board President Barbara Burns, who was in attendance during the presentation Thursday afternoon, said she was thrilled about prospects of the speaker series and the opportunity it presented for students.

She said that she appreciated the insights that speakers provide such as not giving up, believing in oneself and ethics.

“This program is a wonderful way for students to have opportunities to speak with scientists, astronauts, ambassadors, embassy personnel, and others,” Burns wrote in an email Friday evening. “Through this, students can see some of the possibilities for their own careers.”

Currently, an expansion of the Distinguished Speaker Series is being considered, she said, which would apply to Ryan, Guyer and Braswell high schools. But, expansion is limited in part due to Reed’s status as a volunteer and the logistics of him being at the different schools. Burns said, however, that possible next steps are being discussed.

For the remainder of the semester, Lentz said that advance notice of speakers will be shared with science departments at Ryan, Guyer and Braswell high schools, which would be forwarded to interested teachers with a link to the video conference so that students may remotely watch from their respective schools.

Additionally, Burns said the speaker series, currently available only to high school seniors, is considering whether to open its attendance to juniors. Burns said, however, a significant drawback to the program is that students attending the series do so during their lunch breaks, which limits participation.

As questions wrapped up and the bell signaling the end of the lunch period rang, students that were still in attendance were photographed with Moghbeli before she signed-off and students exited the classroom.

For 18-year-old Ritu Banerjee, a senior at DHS, listening to Moghbeli speak Thursday afternoon was one of the more impactful moments she’s had since starting to attend the series last year. Banerjee, who plans to pursue an engineering degree, said the series provided her an opportunity to learn more about her interests.

“It was definitely a unique opportunity to talk to someone of her stature,” Banerjee said. “NASA and space are always very fascinating [to me]. It was nice to talk to somebody that experiences this and is preparing to go out to space.”