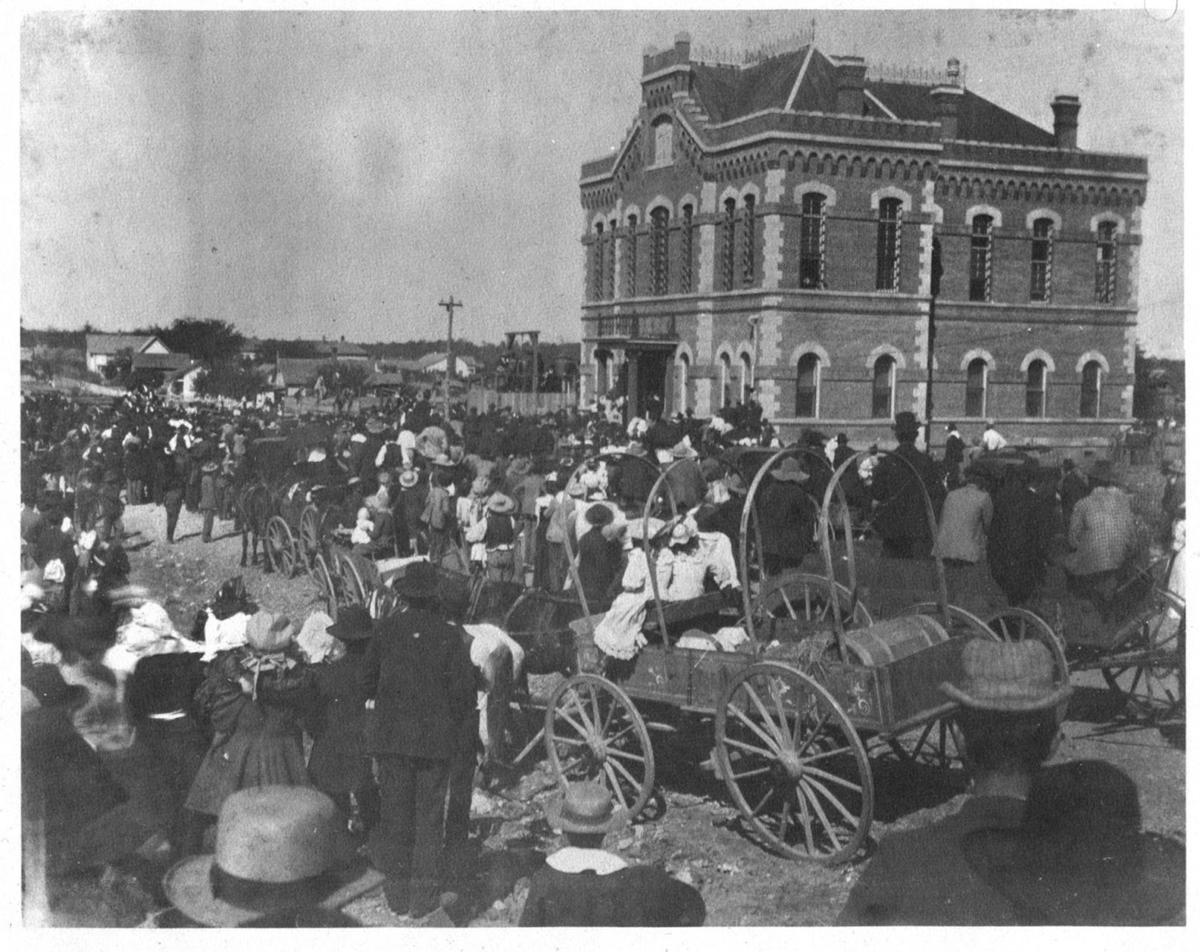 The old Denton County Jail was the setting for the last public hanging in Denton on Oct. 14, 1895. The jail building was demolished in the mid-1960s.

Denton’s Courthouse on the Square is an impromptu living room for picnics, yoga, rallies and concerts. People enjoying the courthouse lawn might be surprised to learn about a 1965 movement to demolish the historic building. Even the Denton Record-Chronicle thought it should go. A 70-year-old building is old enough to be obsolete, but not old enough to be cherished.

Fortunately, the courthouse survived, but a sibling, Denton’s fourth county jail near North Elm and West Parkway streets, was demolished.

Denton’s population in 1890 was 2,558. The jail was built in 1891 for $25,000, and the larger Courthouse on the Square was completed in 1896 at a cost of $147,000. Both buildings used similar materials when brick and mortar was rare. Jails indicated a commitment to law and order; the quest to provide secure prisoner housing proclaimed Denton as civilized.

Denton’s first jail, built in 1861, was a two-story, hewn-log dungeon structure at the corner of North Locust and McKinney streets, where the first-story jail was accessible only through a second-floor trap door. When it burned in 1867, neighboring counties housed prisoners until 1868, when a sheriff was held up during transport and was forced to release his prisoner. The second jail, a sandstone structure on the east side of the Square, invited prisoner escape. In 1878, a one-story third jail opened at 402 N. Elm St.

The fourth jail opened with great fanfare in 1891. It was a state-of-the-art facility with elaborate brickwork, ionic columns, arched, stone-capped windows and escape-proof cells built over steel plates. The jailer’s family lived on the first floor. His wife prepared the prisoners’ meals.

The jail was also the site of the last public hanging in Denton County on Oct. 14, 1895. It’s visible in the background of a photograph taken of the hanging.

The jail fell out of favor after the Foxworth Galbraith lumber yard adjacent to it burned in 1964. The building was considered an eyesore because of antiquated plumbing and wiring, rickety wooden stairs and a crooked lightning rod, issues that could have been fixed in an otherwise solid structure.

In December 1964, the Denton County Commissioners Court voted to allow Sheriff Wylie Barnes to auction the jail on the east steps of the courthouse. It sold for $35,500 to Denton Federal Savings and Loan, which demolished the jail to build a parking lot for a new building on the old lumber yard site. The county gave the proceeds to the city in exchange for land the city gave the county for a new jail.

Historic buildings were destroyed across America to build parking lots in the 1960s. The effect of automobiles on historic places gained attention when Lady Bird Johnson coordinated “With Heritage So Rich,” a collection of essays on the effect of urban renewal that helped lead to passage of the National Historic Preservation Act, creating the National Register of Historic Places and State Historic Preservation Offices. President Lyndon Johnson signed the law in 1966.

Historic preservation wasn’t a topic prior to 1966, but attitudes slowly changed. Historic buildings connect one generation to the next by creating a sense of place. Once they’re gone, they can’t be replaced.