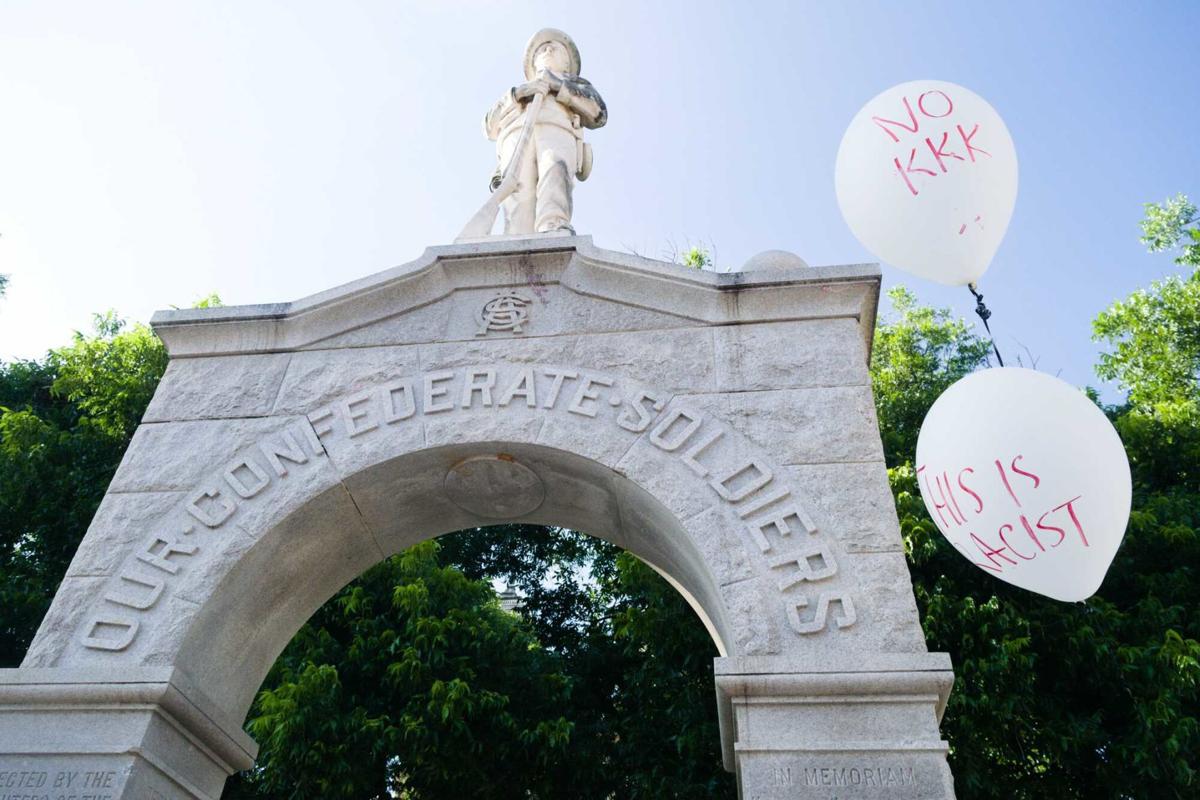 Protesters’ messages float on balloons left by the Denton County Confederate Soldier Memorial on the Square on Monday. Commissioners voted unanimously on Tuesday to relocate the monument, which was built in 1918. 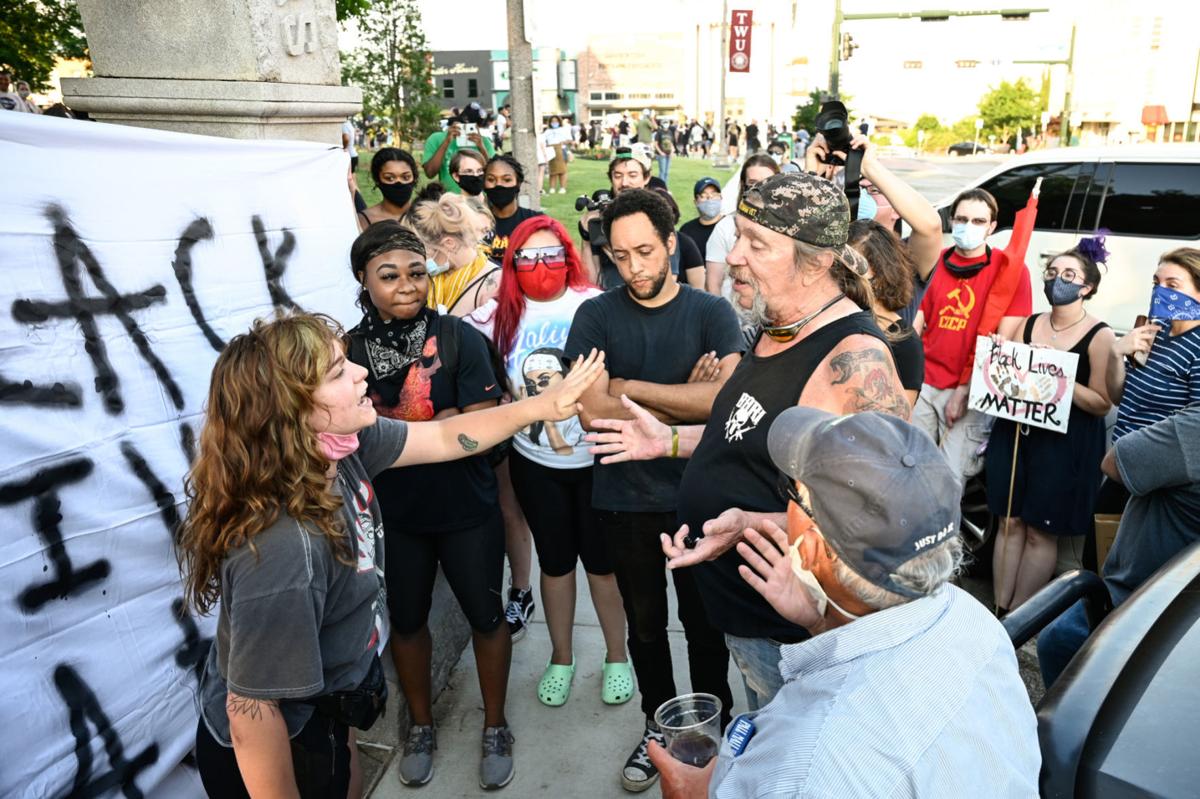 Protesters and counterprotesters argue in front of the Confederate soldier memorial at the Courthouse on the Square on Tuesday. 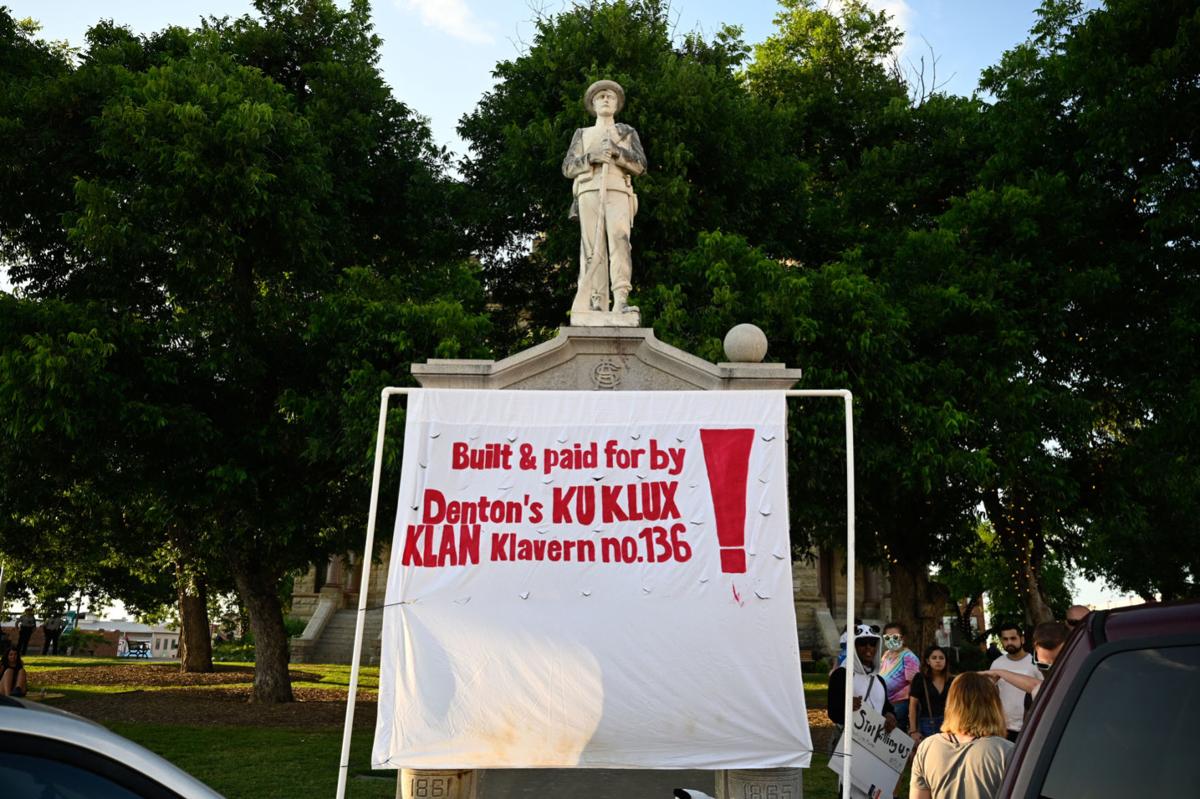 Protesters on Saturday put up a banner with a pointed message in front of the Confederate soldier monument on Denton’s downtown Square.

Protesters’ messages float on balloons left by the Denton County Confederate Soldier Memorial on the Square on Monday. Commissioners voted unanimously on Tuesday to relocate the monument, which was built in 1918.

Protesters and counterprotesters argue in front of the Confederate soldier memorial at the Courthouse on the Square on Tuesday.

Protesters on Saturday put up a banner with a pointed message in front of the Confederate soldier monument on Denton’s downtown Square.

During the meeting, Denton County Judge Andy Eads described the statue not as a monument but rather as a memorial honoring the dead. To some, he said, the statue serves as linkage to past heritage, but for others it is a symbol of oppression.

Eads said the commissioners’ decision, which came after an emergency agenda item was added late Monday, was reached after speaking with local businesses that have suffered losses from COVID-19. In addition, he said reports of other “artifacts” being removed or destroyed elsewhere, as well as the safety of the public, factored into the decision, adding that “now was the time for action.”

“There is an overwhelming sense that the deep consciousness of America has been touched by events in recent weeks,” Eads said of protests against police brutality and systemic racism. “[The Denton County Courthouse on the Square Art Committee] and the Denton County Commissioners Court have made a decision to remove and relocate the Confederate memorial from its current location.”

Eads said both he and Commissioner Bobbie Mitchell met with the committee and, because a quorum was not present, that a public hearing notice was not required.

Protests around the country and abroad have continued since the death of George Floyd in police custody in Minneapolis, after a white officer kneeled on the black man’s neck.

For more than two decades, Denton resident Willie Hudspeth has continually protested the Confederate memorial, referring to the statue as a “dividing factor” for the community. After 21 years of fighting for the statue’s removal from the Courthouse on the Square lawn, Hudspeth said Tuesday his emotions have been a twofold front of living in the moment and asking, “What next?”

Hudspeth, who grew up during the height of the civil rights movement in the 1960s, said the statue should not be publicly displayed.

“[Eads] said, again, this time that we are trying to do this for the safety of the community, but it has nothing to do with safety,” Hudspeth said. “It does not need to be in any public place of honor of any kind, because it reminds us of what happened, and I don’t want to be reminded of that.”

As the public comment portion dominated the meeting on Tuesday, most participants voiced their frustrations and pushed commissioners for a swift removal of the statue, while few called for the monument to stay. While most comments denounced commissioners’ reasoning for removing the monument, some expressed relief that change had finally come.

Linnie McAdams, a civil rights-era activist who contributed to the desegregation of Denton schools and businesses, said she was deeply appreciative of the commissioners’ decision and the ability to walk freely around the downtown Square.

“Now, when I come to the [Square], to go to Beth Marie’s Ice Cream or The Chestnut Tree for goodies, I won’t have to see that statue and be reminded,” she said. “I want to thank [Eads] and other people, as just people, not supporters of the Civil War, which is so far behind this, and I am delighted to see that we are moving on.”

No timetable has been announced for when the statue could be removed “for purpose of interpretation” by the Denton County Office of History and Culture.

As the meeting progressed and led into other agenda items, such as public health, another update on the county’s health response to the pandemic was provided to commissioners. Speaking remotely Tuesday morning, Denton County Public Health Director Matt Richardson said improvements continue to be seen regarding two-week case trends and symptom onset.

“Those two metrics that we track every week offer hope that we are not seeing a surge and that our health care system is stable,” Richardson said. “About 16% of ventilators are in use, ICU bed capacity is below 50%, and total hospital bed occupied is roughly 56% — all are good signs.”

The weekly positivity rate is unavailable for the most recent week, pending additional data from the Texas Department of State Health and Human Services, said Jennifer Rainey, spokesperson for Denton County Public Health. In addition, she said state health has not updated the cumulative countywide testing totals since June 3.

Richardson said the next drive-thru testing event will be on Friday, from 8 a.m. to noon in Carrollton. The county will have 400 tests available for the event at Creekview High School, 3201 Old Denton Road.

Individuals must register in advance by calling Denton County Public Health at 940-349-2585 between 8 a.m. and 5 p.m. Monday through Friday. Symptomatic persons and critical infrastructure workers are eligible for the free tests.

When asked when and whether in-person media and the public would be allowed to attend future commission meetings, Eads said that a specific timeframe was not known but that commissioners would consult health directors.