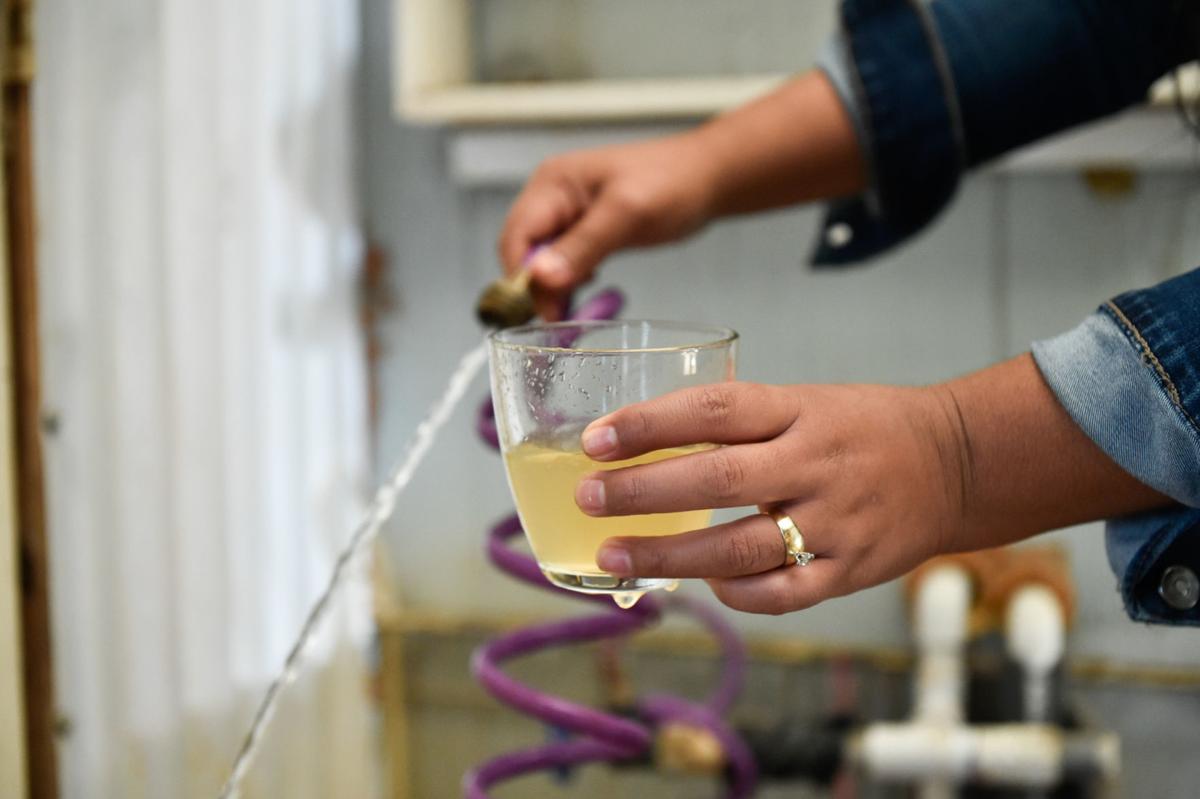 Ednna Guajardo shows a cup of water that came out of a tap in her family’s home at Green Tree Estates in the 4000 block of Hilltop Lane. 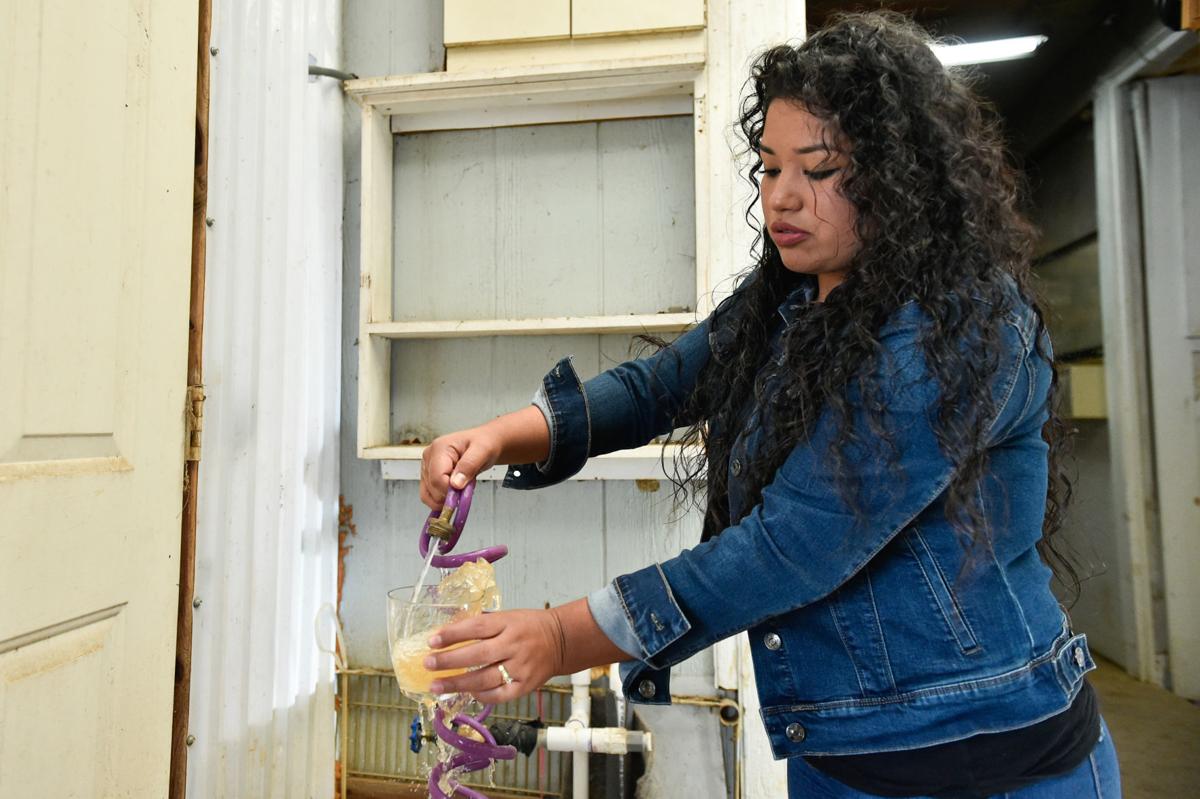 From a pipe at her family’s home, Ednna Guajardo fills a glass with tap water on Saturday. The family uses several water filters — but even so, this isn’t water they drink. 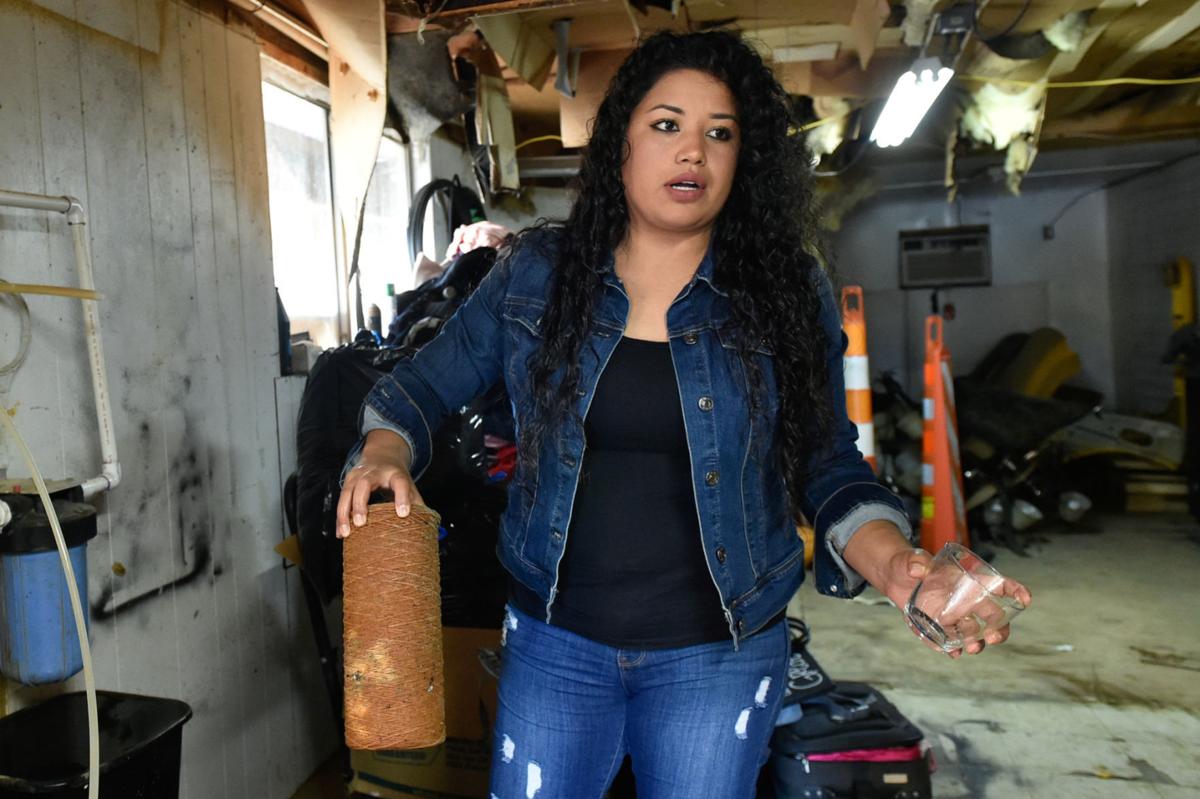 Ednna Guajardo shows what a water filter looks like after it’s been used to clean her family’s water for a month at their home at Green Tree Estates in southeastern Denton.

Residents of the Green Tree Estates neighborhood left a meeting Oct. 29 discussing the future of their water supply with more questions than answers since there was no translator. Now, with LULAC, they’re walking into Monday’s meeting more prepared.

For several decades, Green Tree Estates has been among at least 50 small public water suppliers operated by private businesses in Denton County. State records showed Green Tree and its former owner, W.J. Roddy, faced enforcement actions in the past.

The current owner and operator of the water well, Don Roddy, told the city of Denton and the Green Tree residents he would stop operating the water well on Friday, Nov. 15.

Residents are preparing for the worst but are hoping to leave a meeting with the city Monday discussing the area’s future with more answers and a viable solution.

An agreed order in 2002 detailed the steps Roddy agreed to take to bring his system into compliance. In 2014, another agreed order fined Roddy $2,042 for many of the same problems: failing to test the water for contaminants or disinfectant and failing to have a licensed operator running the system.

This year, state records listed the system as “inactive” and city officials filed a complaint stating that the system continues to meet the definition of a public water supply, particularly since more than 25 people are served by it.

While many of them use the turbid water for bathing and washing dishes, some with water filters, they aren’t drinking it.

Ednna Guardado is one of the residents living in the small enclave of mobile homes near Pecan Creek Elementary School. She is one of the few renters in the area and lives with her husband and their three daughters.

“Ever since I’ve lived here, the water has always been [dirty],” Guajardo said in Spanish. “In this house, I have a filter [for the water], but we don’t want to move from here because we’re comfortable in this neighborhood. My kids’ school is here.”

Green Tree Estates is in an area that was annexed into city limits in 2013. The initial ordinance for the annexation was adopted in 2011 and outlined specific requirements for extending water service to the area so it can conform with Denton’s requirements.

The Oct. 29 meeting showed Roddy has declined to connect to the city of Denton system since 2013. The city can’t directly connect to customers because all the roads and the well water are privately owned.

Guajardo said she has several filters to try to have clean water in the home. Even so, this isn’t water that they drink. Toward the back of the house, she showed the Denton Record-Chronicle one pipe where the water comes from.

She poured some in a glass and it came out a dirty yellow color — the same color of water that she brought to last month’s meeting in a clear bottle.

When she turned the faucet off and then on again, the water came out clearer. She said sometimes the water does come out looking cleaner, but most of the time it’s dirty. She said her daughters have gotten blisters a couple of times as a reaction to the water on their skin.

The residents want to go into Monday’s meeting prepared to speak and hopefully leave with answers. They met Saturday at Guajardo’s house with other neighbors to compile questions they would voice at the meeting.

Guajardo and Lilyan Prado-Carrillo, president of the Denton League of United Latin American Citizens council, have been organizing to prepare for a meeting with the city on Monday. The president of Movimiento Cosecha Denton was at Saturday’s meeting to help, too.

Prado-Carrillo said LULAC is helping to make sure this community, many of them Spanish-speaking, has its needs met as a part of the organization’s mission to protect Latinos in America.

One of the main roles is to translate and disseminate information to the residents. Guajardo said they left the Oct. 29 meeting about their water services with more questions than answers because there was no one to translate for them.

The city will be providing a translator for Monday’s meeting so residents can understand what’s said.

At Saturday’s meeting, Prado-Carrillo and the residents discussed one of the solutions being offered — a central community bathroom in a trailer for the residents.

“I understand the city is trying to do what they can,” Prado-Carrillo said. “The city thinks this is a choice of dignity, but the community says no. They shouldn’t have to bathe their children [in a community bath].”

Homero Saldana, a homeowner in the neighborhood, said the community bathroom is solution for someone who lives alone, but not for someone with a family.

While the adults voiced their frustrations and discussed some of the city’s talking points, their children sat around like any kid at a meeting would. Guajardo said their kids understand what’s going on. She said her daughters — ages 10, 12 and 13 —told one of their teachers their water would be shut off.

The notification residents received falls short of the 120-day notification bracket set by the Texas Public Utilities Commission. But because Roddy told the Texas Commission on Environmental Quality that some of the 11 connections are illegal, the TCEQ’s position is that illegal connections can be disconnected without notice.

The TCEQ also said if there’s no service agreement or contract with the people receiving water, the owner can turn off the well if they wish to do so. As of mid-August, there are nine connections.

Guardado and Prado-Carrillo went through the neighborhood recently and found that more than 42 people live there, with a few more who come and go. Although they don’t have a contract with Roddy for him to provide water to the residents, at least two residents have proof of paying for water services.

While it’s easier for renters in the area to pack up and move, a majority of the residents there own their homes and their property.

The residents are hoping the city has a viable solution for them at Monday’s meeting. However if there’s nothing, there was talk of starting a fundraiser to get residents 300- to 600-gallon water storage tanks.

“The city said they would provide the water, but [the residents] would still have to lug the storage up the street to where they can get the water,” Prado-Carrillo said.

Monday’s meeting with city representatives will be at 6 p.m. at Pecan Creek Elementary. The Denton City Council is expected to discuss the Green Tree Estates’ water services Tuesday.