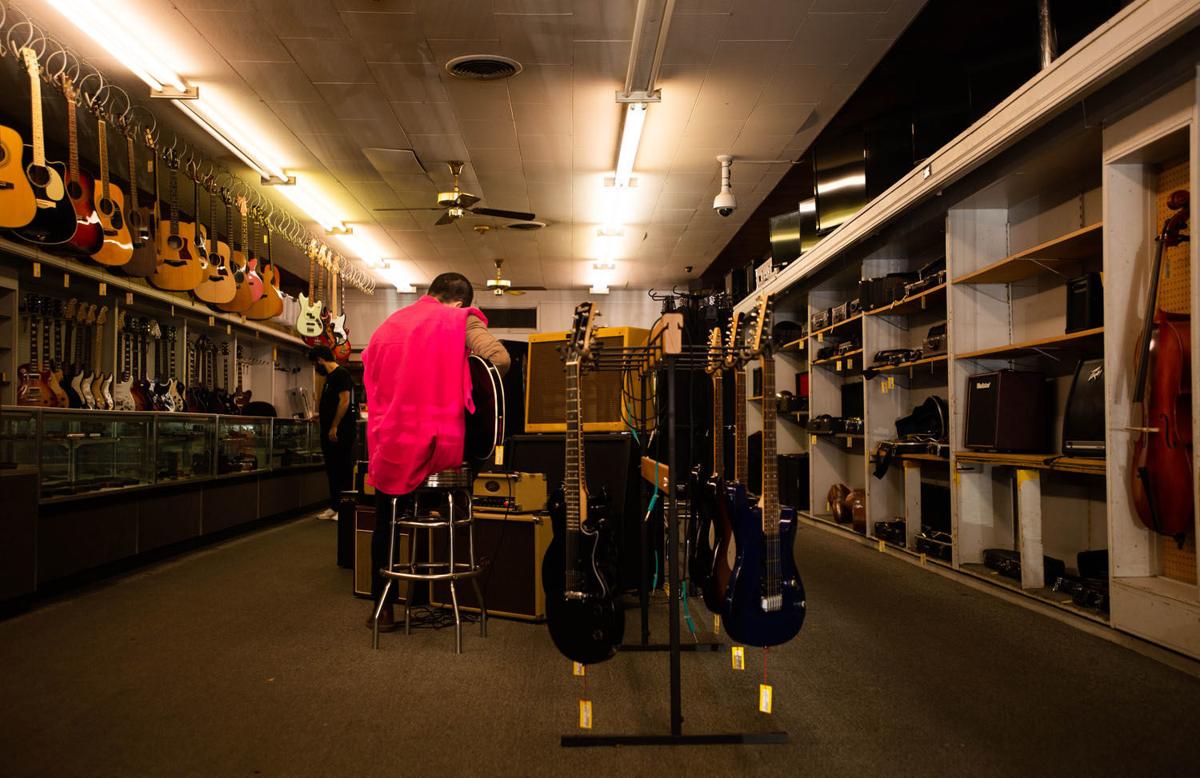 A musician tries out a guitar recently at McBride Music & Pawn, located on the Oak Street side of the Square. 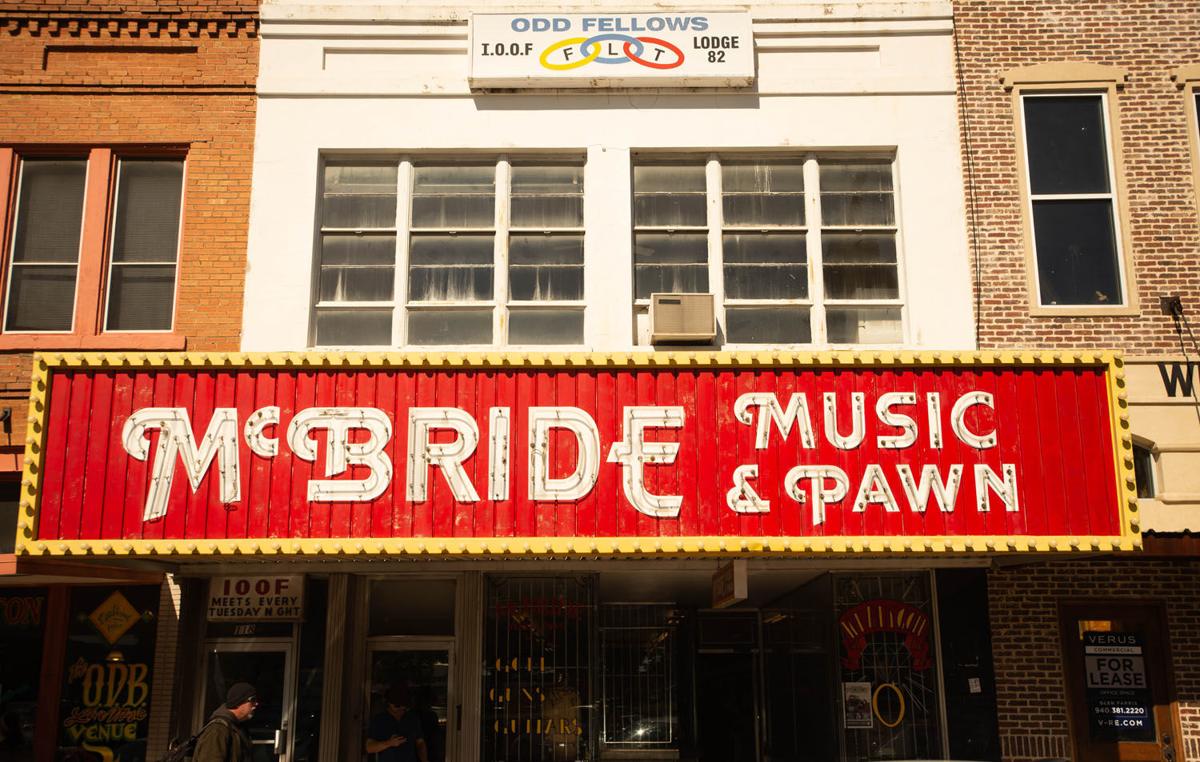 McBride Music & Pawn has been there for Denton musicians for the past 50 years, located on Oak Street on the Square.

A musician tries out a guitar recently at McBride Music & Pawn, located on the Oak Street side of the Square.

McBride Music & Pawn has been there for Denton musicians for the past 50 years, located on Oak Street on the Square.

Denton is a town known for its music. But for those musicians who haven’t made it, who haven’t grabbed enough money or fame, there’s a place to turn to when they need to pay rent or have to put their careers on hold or outright quit. McBride Music & Pawn is that place — and it has been there for Denton musicians for the past 50 years.

The quaint shop rests on Oak Street on the north side of the Square. Its vibrant red sign extends over the sidewalk, barred windows protecting the collection of musical instruments acquired from those forced to pawn their dreams in person as well as those negotiating their future by purchasing their instruments online.

Now, with COVID-19 wreaking havoc on small businesses across the country, McBride’s online client base is more important than ever. The shop, like countless other stores, had to temporarily close to regular walk-in customers as a response to COVID-19. But pre-pandemic scenes like this one in November were part of McBride’s regular course of business:

A musician enters the narrow shop as its ill-fitting door clangs open. It’s Alex Luette, 25, and he is carrying his precious Gibson Les Paul electric guitar. He is greeted by the organized chaos of drum kits, amplifiers, a row of aged acoustic guitars dangling from the ceiling and a man sporting black-framed glasses sitting behind the counter.

“I’d like $800 for the guitar,” says Luette, getting right to the point of his visit.

The man logs on to his computer and runs a quick internet search. He is Cody Garcia, the co-owner of McBride’s and a onetime musician himself. “I can give you $600 for it,” he says. “It’s going to sit here a while, and I have to make a profit.”

Garcia, 43, sits back with a friendly expression awaiting an answer. He has negotiated plenty of these deals throughout the years.

Luette anxiously combs through his shaggy blond hair as he considers the offer. “I’m going to have to think about it.” He leaves the shop, guitar in hand. Facing mounting student loans after graduating college, he believes his musical aspirations are a thing of the past — it felt time to give up the guitar.

“I don’t play it anymore — there was a time I wanted to make a career of it,” he later says. “That wasn’t an attainable goal after a while. You grow up, move on, need money.”

As a musician in Denton, Luette knew all about McBride Music & Pawn. He frequented the shop several times, purchasing guitar picks, capos and amplifiers to aid in his pursuit to make his music sound more professional. But if things went badly, he always knew he could come to McBride and trade in his guitar for cash.

“I’ve got a couple other guitars,” Luette says. “It’s still a hobby, but I came here hoping to get some money. I’m going to shop it around further.”

Employees at McBride have heard this song before. Larry McBride dug his roots deep into Denton in 1968 when he opened his pawn shop on the Square. For years, he ran it with the help of his nephew, Glen McBride, who left to open his own pawn shop in Denton. That shop closed in 2018 after 41 years in business before reopening under new ownership.

University of North Texas graduate Alexis Lopez, a former Denton resident, remembers McBride’s as a staple of the Square.

“That shop is just part of the culture,” Lopez says. “That, along with the Recycled bookstore and the Mini Mall, before it burned down — those were places that were cool to wander into. It has an authentic vibe that carries a lot of history.”

Garcia became part of the shop’s history when he began to frequent McBride while a music student at UNT. He spent time in the shop hanging out, pawning old instruments, buying new equipment. In fact, he spent so much time there, he began picking up shifts in between stints on the road playing shows. It represented the outlet that allowed him to pursue a musical career for as long as he could. Larry McBride would expect him to work there when Garcia wasn’t on the road.

“I never really felt compelled to use my degree,” Garcia says. “I was playing guitar and touring with different bands, trying to make it. We agreed that I would work here when I wasn’t touring.”

Their work relationship gradually turned into something more personal. For Garcia, the shop and McBride himself represented an extension of his family.

“He talked me to me about a number of different things,” Garcia says. “He quickly became a mentor for me.”

Following McBride’s death in 2011, Garcia and a few partners decided to buy the shop. It was the logical choice for the man who had been working there the longest.

Although the shop still produces traditional pawn shop scenes that could be straight out of an episode of Pawn Stars, the very nature of a traditional pawn shop is undergoing its own form of reinvention. With the growth of the internet, sites such as eBay and Craigslist are where you will find regular customers of McBride’s doing most of their bidding.

On your average day, you can find Garcia locked into his computer screen looking for good deals on musical instruments, accessories and anything else that may sell in the store. When he finds a good deal, he buys it, refurbishes it if necessary, posts it online or displays it for the walk-in crowd.

“We love this community — it’s really supportive of music,” Garcia says. “But I do think there’s a big misnomer that because it’s a music town, we do great here. There’s just no way we could just limit ourselves to walk-in customers. The internet makes it so that even small businesses like us can sell our stuff everywhere.”

Even for a business that has survived in Denton for five decades in the same enviable location, reliance on the digital marketplace is fundamental to its growth.

“Tradition is great; we welcome that here,” Garcia says. “I like to believe the future is bright — we just have to continue to adapt to survive.”

This adaptation has been vital to the shop’s ability to remain open, at least virtually, during the COVID-19 crisis. Their emphasis on growing their online client base before the virus put much of the world on pause enabled Garcia and the team at McBride to move forward as normally as they could. Without its online component, the store would likely face even more stressful financial times.

However, now that Gov. Greg Abbott allowed businesses to start reopening, McBride will welcome back its loyal walk-in clientele — while ensuring proper social-distancing measures, of course. Although the tides of the digital landscape are rising for the pawn shop, nothing can replace the authentic feel of a musician who, after walking into the shop, picks a new Fender guitar and plucks at its strings, the music wafting through the small store, just as it has for the past half-century.