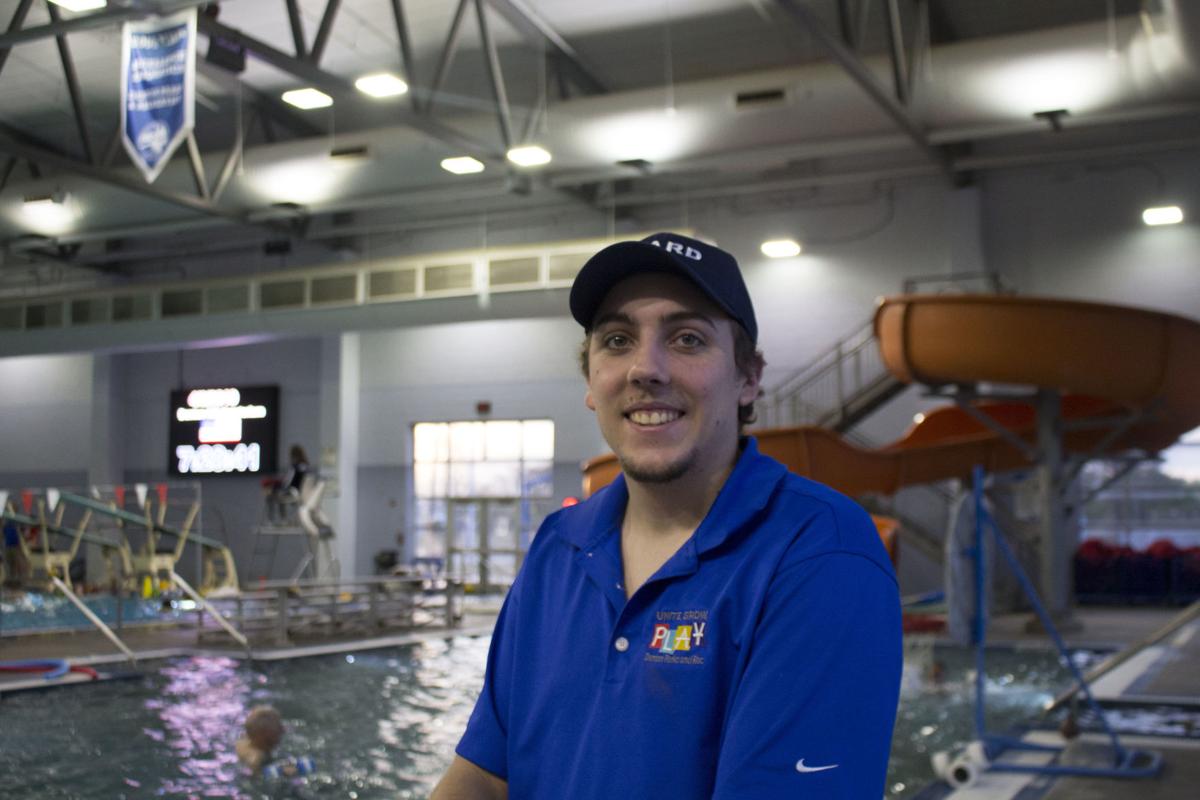 Cody Roche, an assistant pool manager for the City of Denton aquatics, works to make sure others are safe in water. The 20-year-old attends the University of North Texas and hopes to become a physical therapist. 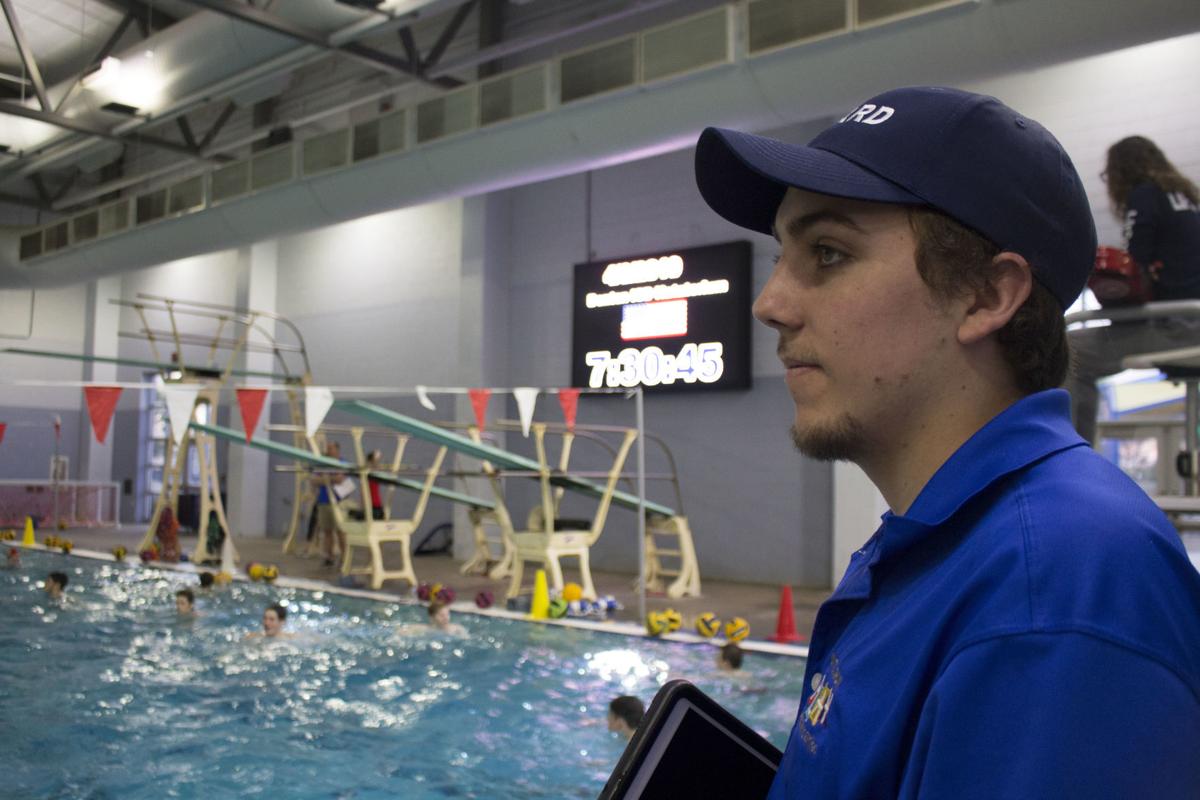 Cody Roche makes sure guards and swimmers are OK at the Denton Natatorium. 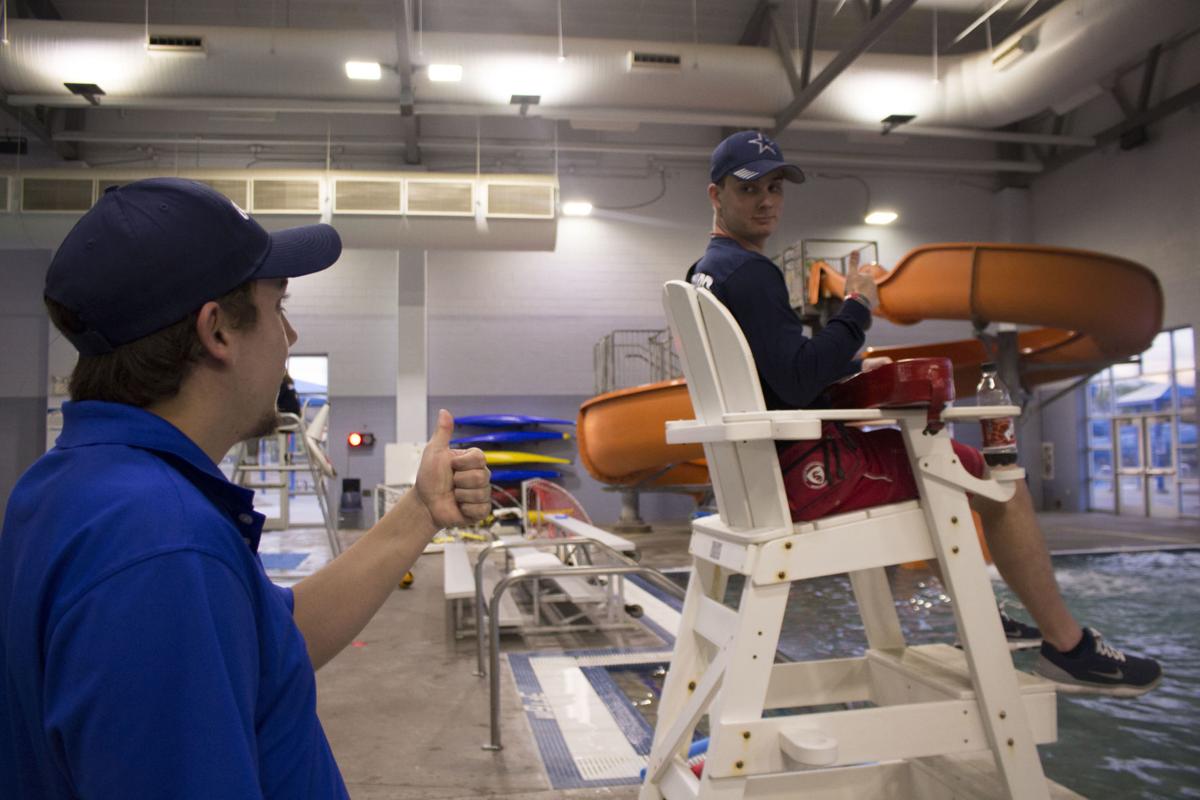 Cody Roche checks on lifeguard Austin Travis as he watches over the early rising senior citizens swimming at the Denton Natatorium. 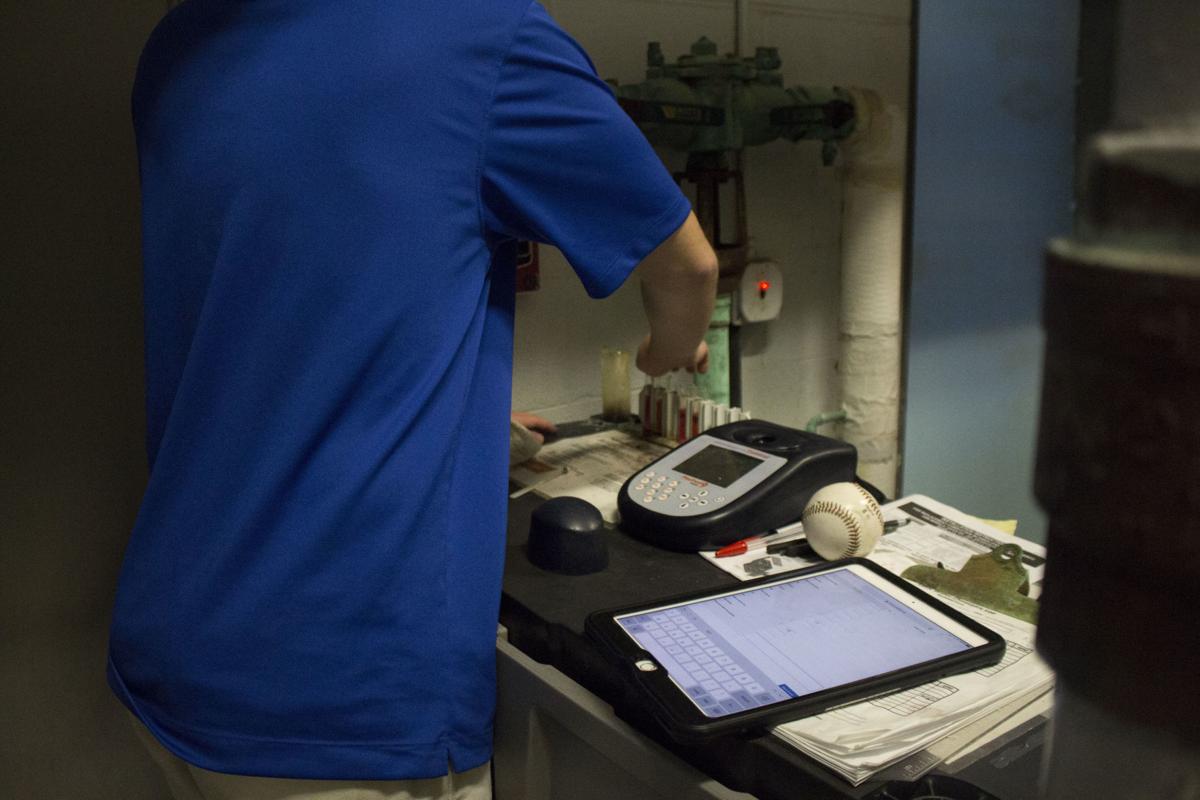 Cody Roche, an assistant pool manager for the City of Denton aquatics, works to make sure others are safe in water. The 20-year-old attends the University of North Texas and hopes to become a physical therapist.

Cody Roche makes sure guards and swimmers are OK at the Denton Natatorium.

Cody Roche checks on lifeguard Austin Travis as he watches over the early rising senior citizens swimming at the Denton Natatorium.

Cody Roche remembers a July evening, scanning the water as kids and adults are shoulder to shoulder swimming in the Water Works Park wave pool. Unable to see clearly with the massive crowds swimming by, he is on the edge of what might occur and holds his whistle — ready for anything.

“Help! Help!” someone yells in the distance. Hearing the voice, Roche looks and sees a boy with no pool tube. He is about 8 years old and wide-eyed.

“It’s go time,” Roche says, while his heart is pounding. He blows his orange lifeguard whistle and activates the rehearsed emergency action plan to let other lifeguards know. A lifeguard on break runs to the scene and takes coverage for backup assistance. The waves in the pool are shut off, and the pool manager brings a first aid kit.

Roche jumps in the water and comforts the boy. “Where are your parents?” he asks and takes the boy out of the water. In the chaos, he can’t remember what the boy was wearing but continues to be on the lookout for more who may need help.

“We have to know the stress of the situation,” Roche says. “If we don’t act fast enough, something bad could happen.”

Now about two years after his first save as a lifeguard, Roche, 20, is a part-time assistant pool manager for the city of Denton aquatics, including the Denton Natatorium, Water Works Park and the Civic Center Pool. He relishes the role of preventing accidents. Roche works behind the scenes in making sure pools have a proper pH balance and lifeguards are on their game.

Roche came to lifeguarding during his senior year of high school. He grew closer to the idea after his older brother said he really enjoyed it.

“You learn interesting stuff and meet some interesting people, and it’s a great job to have in the summer because you’re outside,” Roche says.

Most employees are students, either in high school or college, Roche says. In the winter, there are about 30-40 guards, whereas in the summer the number of required guards needed is 115-140. The city of Denton increased the pay of lifeguards to $11 per hour in March; previously, they were paid $9.18.

Roche says it’s not always fun in the sun. Lifeguards must be prepared for any situation to occur in the water and even outside the water as people may throw up or trip and fall.

For Roche, he likes the contrast lifeguarding offers him. As a kinesiology junior at the University of North Texas, he applies the skills he learns at work to his course material. He hopes to go into physical therapy.

“As a physical therapist, I’m trying to get that person back to normal, more comfortable,” Roche says. “Lifeguarding is the almost exact opposite. We want to try and prevent them from getting to the worst possible moment in their life, either drowning, breaking something, but making sure they get the proper care.”

Working the early shifts at the Natatorium from 5:30 to 10 a.m. on Mondays and Wednesdays before class, life gets busy for him. He sometimes takes naps after work in his apartment, or drives to UNT and naps in his car before class.

As early as 5:30 a.m., when the Natatorium opens, people are waiting in line to dive deep in the clear, chlorinated water. Opening the doors for them, Roche is dressed in a blue Nike Denton Parks and Rec shirt, beige cargo shorts and camouflage Crocs. On his head is a navy blue hat that says “GUARD” in bold white letters.

“When it comes to saving, you’re not thinking anymore,” Roche says. “It becomes ‘boom, boom, boom’ and you don’t have to overthink it.”

The Denton Mermaid Club, founded by Rayne Riverstone, mainly visits the Denton Natatorium at least once a month. Club members swim with monofins in the water. While at the Natatorium, Riverstone says she notices the lifeguards training and appreciates their hard work.

“At our mermaid meets, there are a lot of mermaids around, and sometimes one of us mermaids can get lost in the crowd and could be having some trouble,” Riverstone say. “A lot of the times we won’t notice or see, and the lifeguards being up on the stand are there and able to help out if something should happen.”

Austin Travis, a 16-year-old who has been working as a guard for about two months, takes the early morning shifts.

“At in-service training, I have had to save people when we practice,” Travis says. “Fortunately, I haven’t had to make any real saves yet.”

Lifeguards must have an hour of in-service training per week, as required by the state. During the training, guards go over scenarios and risk factors.

Denton Aquatics Manager Monica Martin says the city’s lifeguards have more certification training than what’s required for a regular guard, in addition to their required certification and prerequisites.

“They have water park addendum, and within our facility, in Denton, we operate oxygen administration, so we offer O2 training, epinephrine injector training — and so our services go above and beyond than what is normally offered in other cities,” Martin says.

Roche, an active sportsman, grew up hiking, camping and playing football and track at Denton High School. He learned to swim at age 5 when his parents began teaching him at a private neighborhood pool. Training is nothing new for him, he says.

Helping others is one of Roche’s main goals, he says. Getting ready for college his senior of high school, he asked his grandmother about her knee surgery and his friend’s ACL recovery and about their physical therapists. When he looked more into it, he knew becoming a physical therapist was for him because it’s not a regular doctor visit, he says — it’s more friendly.

“Someone can have the exact same knee injury or ACL torn,” Roche says. “The same exact incident and same body type, but each person takes treatment differently, and so it’s never repetitive.”

While at work, he takes care of those who might be in danger in the water. When he remembers the first save he made, the young boy on a July evening, he says lifeguards are needed.

“Lifeguards are essential for everyone else who is going to be swimming in or is around any type of water,” Roche says. “If there were not lifeguards at pools or popular beaches, the number of drowning deaths would skyrocket.”

This is part of a multi-day series on "First Responders." The series was produced by students in the "Covering Crisis, Trauma and Recovery" class at the University of North Texas' Frank W. and Sue Mayborn School of Journalism during the spring semester.