Updated at 9:50 a.m. to correctly describe council member Deb Armintor's Denton residency, and that the Civil Rights Act was enacted in 1964.

A Denton man calling himself a “proud but increasingly concerned native” warned the City Council Tuesday night that he would initiate a recall petition against council member Deb Armintor for her social activism.

William Freeman also left behind a cease-and-desist letter threatening to sue Armintor for blocking him from her campaign’s Facebook page.

“This isn’t a crusade, but these are the options she left me with,” Freeman, 31, said in an interview Wednesday. “She has slandered this city, calling it a hateful, racist place with hateful bigots. She doesn’t support our local culture.”

During the open mic session that the City Council holds at the beginning of each regular meeting, Freeman said Armintor is an agent of the Southern Poverty Law Center. He said her work “reviled the ancestry of the citizens of this peaceful community for far too long.”

Armintor, who has lived in Denton since 2002, denied having any such affiliation with the center, but she said she understands why her work is a lightning rod. She campaigned for office to get reforms in the executive suite at City Hall and at Denton Municipal Electric, not for social issues. Regardless, she presses for change, she said. 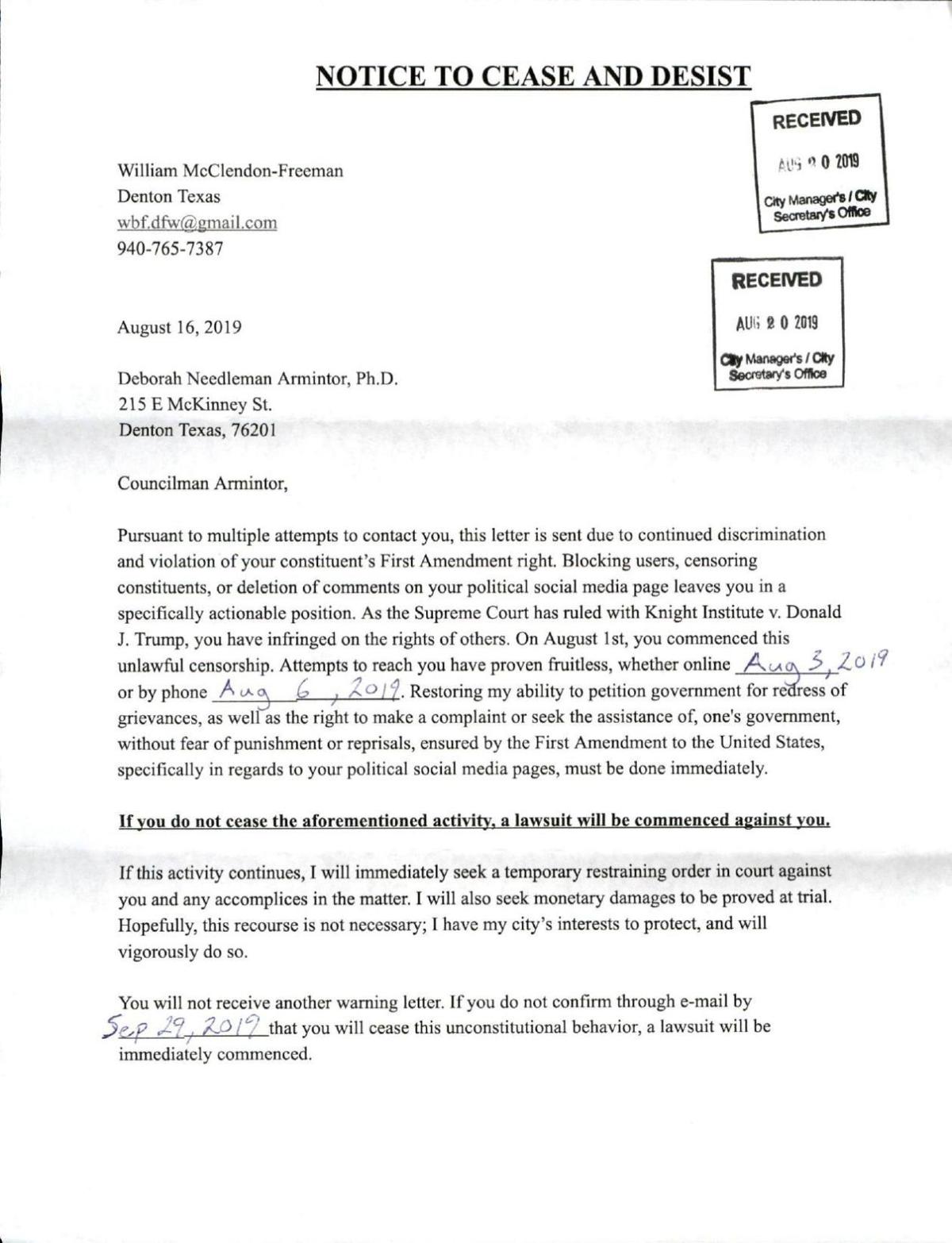 “I’m aware that just by being Jewish, I have white skin and privilege, and that comes with responsibility,” Armintor said Wednesday. “I don’t think left wing or right wing, but you have to use your position to speak up for people who can’t.”

On Tuesday night, Freeman called the Southern Poverty Law Center a hate group and said Armintor holds a deep affection for them.

“I have trouble accepting that she’s done that little research on them,” he added Wednesday.

The Southern Poverty Law Center, based in Montgomery, Alabama, began in 1971 after prominent businessman and lawyer Morris Dees noticed that few other lawyers would take on civil rights cases. The Civil Rights Act of 1964 was the law of the land, but the resistance to it, particularly in the South, was strong. Dees sold his business to start the nonprofit legal center and persuaded another lawyer to join him.

Their successful cases changed the legal landscape in Alabama. They also won multimillion-dollar judgments for their clients against white supremacist groups, essentially shutting them down.

Dees, 82, was fired by the nonprofit’s board in March, a move linked to workplace conduct, according to national media reports. Those same reports said the nonprofit’s endowment approached a half-billion dollars.

Although not its primary mission, the center still tracks hate groups of all stripes and lists 14 groups with statewide activities that include North Texas.

SPLC officials denied that the center itself is a hate group, in a prepared statement to the Denton Record-Chronicle:

“Our goal with tracking hate and extremism is to educate the public on groups and organizations that fall into our definition of a hate group. Our intention is not to silence or infringe upon anyone’s rights to free speech and opposing viewpoints.”

On Tuesday night, Freeman did not say anything publicly about the claims in his cease-and-desist letter. In the letter, he said Armintor violated his First Amendment rights by blocking him from her campaign’s Facebook page.

Armintor confirmed she had blocked his account but only after several questionable interactions online, she said. She tried to find out whether he was a resident who needed help with a specific city issue. The public-facing elements of his Facebook page gave few clues to who Freeman was and had more in common with fake accounts than one that was authentic, she said.

During Wednesday’s interview, Freeman said the social media issue wasn’t about trolling but about his First Amendment rights to express his views.

“Council member Armintor has over and over blurred the lines of who she represents,” Freeman said.

He said he was talking to an attorney about pursuing legal action against Armintor, considering last month’s decision from the U.S. Court of Appeals for the 2nd Circuit, in New York, which found that because President Donald Trump uses his personal Twitter account for government purposes, he violated the Constitution by blocking some users from seeing his posts.

But Freeman said he hoped it wouldn’t come to that.

“I have the right to petition the redress of my government,” Freeman said.

Freeman was raised in Denton and has traveled the nation and the globe, he said. He worked for several years as a contract canvasser for various initiatives, particularly in California. While he hasn’t identified anyone yet to help with the canvas, he said he is confident he can get the required signatures for a recall, if necessary.

The Denton City Charter empowers voters to force a special recall election under certain conditions. In 2014, voters rejected a charter amendment that would have made it more difficult to recall council members, letting long-standing provisions remain.

To recall Armintor, Freeman and four other canvassers, called electors, would have to write a clear and concise statement for the grounds of removal on the petition. Then they would have to collect enough verifiable signatures (with printed full name, address and date) to total 25% of all ballots cast in Armintor’s last election.

A total of 6,506 ballots were cast in the Denton City Council Place 5 runoff election in June 2018, which means Freeman would have to collect 1,627 signatures in a 45-day window to qualify.

Below is a transcript of William Freeman's presentation to the Denton City Council during open mic Tuesday night.

William Freeman: The SPLC [Southern Poverty Law Center] is a hate group and councilman Deb Armintor is its agent. Therefore I am asking that councilman Armintor step down immediately. Should councilman persist, a recall will be subsequently initiated. I have complete confidence that this measure will qualify for the ballot. Armintor’s relationship with the hate group known as the Southern Poverty Law Center is one of close and deep affection, despite numerous warnings of their disgusting history from her constituency. This councilwoman has not only supported a racially discriminative but also a sexually predatory cabal. Armintor has taken extraordinary measures to make sure that her allegiance to the SPLC remains obfuscated and shrouded. At Armintor’s election June 16, 2018, she pleaded with her constituents to “hold me accountable. Let me know what to do ...”

Mayor Chris Watts (interrupting): Mr. Freeman, according to the rules, if you could address your comments to the entire council instead of one specific member, I would appreciate that.

Freeman: Yes, I’d like to address all of you with specific regards to one of you. Thank you.

Watts: If you could just refrain from using personal names as far as individual council members.

Armintor: I don’t mind if he uses my name.

Freeman: At Armintor’s election June 16, 2018, she pleaded with her constituents to “hold me accountable. Let me know what to do because I look to the people for instructions.” She said this despite illegally censoring her voters from participating on social media, silencing the very voices she said she would acknowledge that she would represent and hold dear. She said this despite continuing [to] insult the native heritage of our noble city. She has reviled the ancestry of the citizens of this peaceful community for far too long. When she defended a revenge porn aficionado in December of 2018, she did so in the most opportunistic fashion to assail the aforementioned SPLC on campus. When she defended violent, out-of-town antifa communists July 30, 2019, she did so to assail the aforementioned SPLC into our city. This trend would suggest that she is not serving the community, but instead using her position as launchpad or CV for her ventures back at the revolving door of the ivory tower. In summation, Deborah Armintor and the truth are strangers. I look forward to speaking with you all soon so that we may preserve Denton to our greater ability. I would like to thank you for your time from this proud but increasingly concerned native.