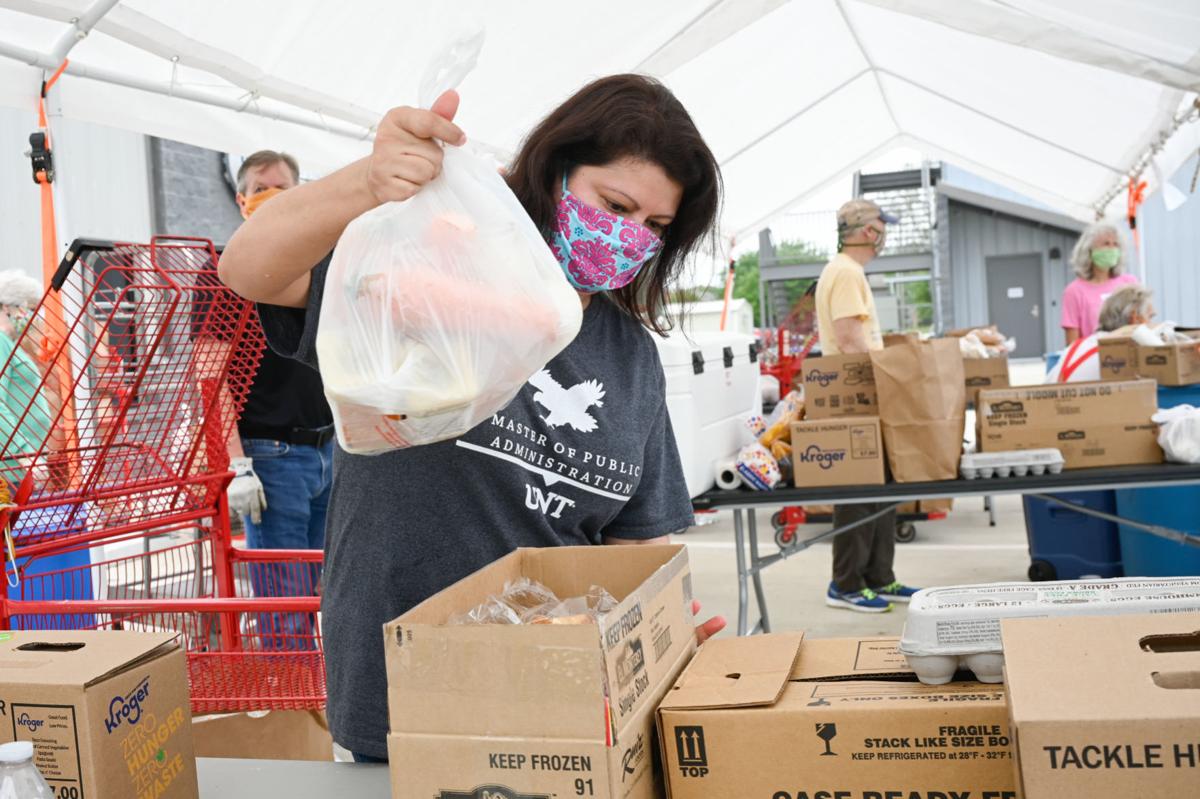 Volunteer Monica Benavides packages food items for clients at the Denton Community Food Center on Wednesday. These days, around 62% of clients are visiting the food pantry for the first time. The center helped around 110 to 120 families by the end of the day. 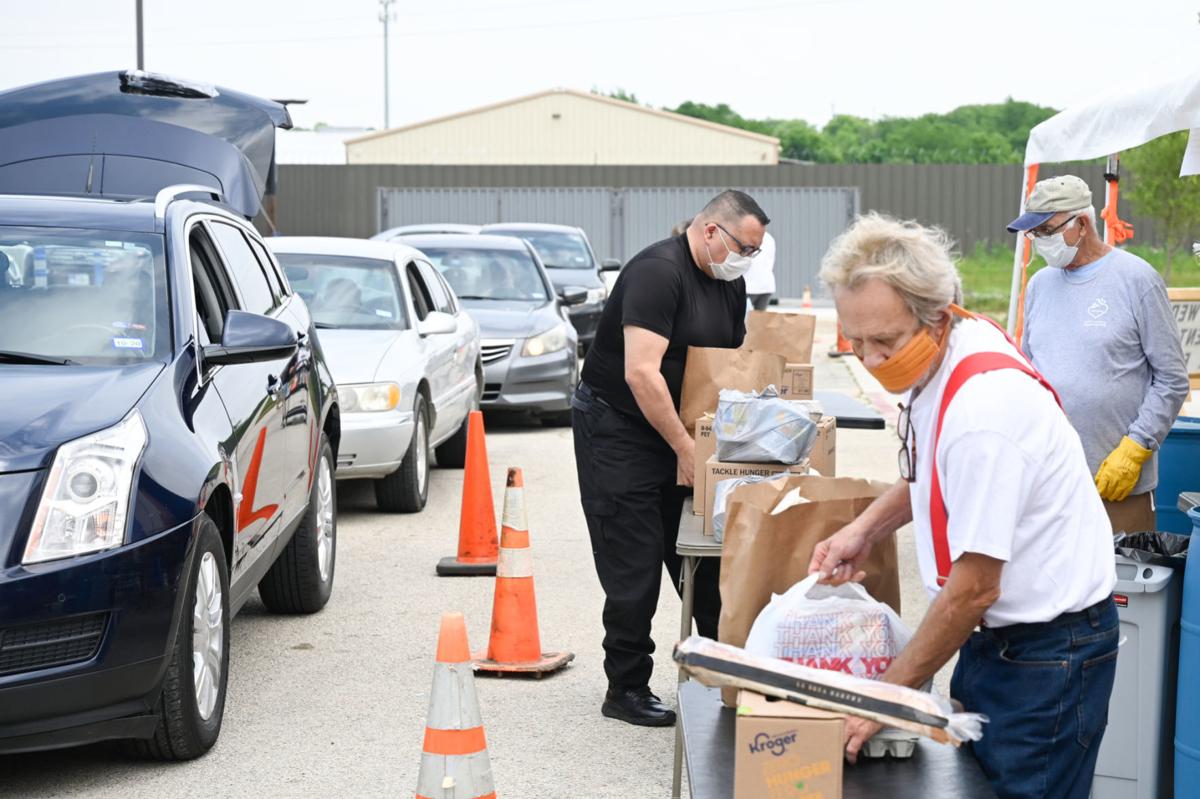 Volunteers assist clients as they pull up in their vehicles to pick up food Wednesday in the drive-thru line at the Denton Community Food Center.

Volunteer Monica Benavides packages food items for clients at the Denton Community Food Center on Wednesday. These days, around 62% of clients are visiting the food pantry for the first time. The center helped around 110 to 120 families by the end of the day.

Volunteers assist clients as they pull up in their vehicles to pick up food Wednesday in the drive-thru line at the Denton Community Food Center.

The Denton Community Food Center is hanging in there, but board chairman Tom Newell expects they’ll really struggle if the COVID-19 pandemic causes more layoffs in the next few weeks.

The center changed its operating hours from five days a week to twice a week in late March, around the same time Newell said they saw a big jump in clientele. But they can’t keep up with the demand as about 110 families visit on pantry days now and supplies dwindle faster than they come in.

“We’re in a position where we just can’t get enough food to keep up,” Newell said. “We’re dwindling in some of our reserves. In another couple of weeks, the reserves will be pretty thin.”

In early April, Newell said about 20%-30% of their clients on April 4 were first-timers. By mid-April, that figure had jumped to about 62% and has stayed constant. In the last 11 pantry days, he said they’ve served about 935 families.

The food center’s supply is going down quicker than it’s being replenished for a few reasons.

The numbers of families the center serves has gone up significantly because people have been laid off. The center’s own retail purchases to supplement goods from the Tarrant County Food Bank are almost zero because grocery stores don’t have enough and they don’t want to take away from people who are able to buy their own food. Food that’s been donated has to be quarantined before it’s passed out, and they’re only just starting to serve the first batch of donated goods.

The food the center passes out changes based on supply. Their bags include canned goods, produce and meat for families to take home. Although they’re still discouraging donations from the general public, because those items have to be quarantined, they’ll still accept items with a long shelf life.

“The thing we’re seeking right now is soup and prepared meals like SpaghettiOs and canned products like chili,” Newell said. “Those are the things we’re really looking for to help us.”

The center distributes about 70 pounds of food to each client, using a drive-thru method in Serve Denton’s parking lot at 306 N. Loop 288 to help keep everyone safe. They’ve also stopped loading groceries into people’s vehicles to limit contact.

People drive up to the parking lot in a row, but when the line starts extending to the road, they’ll have people park and serve them in the order they arrived. One of three interviewers goes to each car and asks for the client’s name, address, family size and income.

To limit contact even further, they ask that drivers keep their windows rolled up and instead show them a phone number to call to conduct the interview.

When they don’t have cars starting to back into the street, the process from arrival to the end, when people pick up their food, takes about 18 minutes, Newell said. When the parking lot starts filling up with cars, it can take about 40 minutes.

Gov. Greg Abbott announced the Texas economy will start reopening Friday, with previously closed businesses able to open up for curbside pickup only — meaning some retail employees will start returning to work. However, Newell said he doesn’t think this will help curb the number of families seeking help from the food center because it’s possible those retail employees were still on payrolls.

“If people continue to be laid off — and the fact two weeks ago 61% [of our clients were] newcomers and we’re still seeing that [figure] — it’s an indication of additional people being laid off as this worsens and small businesses are finally throwing in the towel,” Newell said.

Unless people who were laid off are able to return to work or find new jobs, he doesn’t think the gradual reopening of the economy will help them.

“Once social distancing goes away [and] until people return to employment, we’re going to continue to have these numbers,” he said.

Details: The center is distributing food using a drive-thru model. Clients may receive food once per month. Bring a photo ID or food center card. To donate online or for more information, visit www.dentoncfc.org.