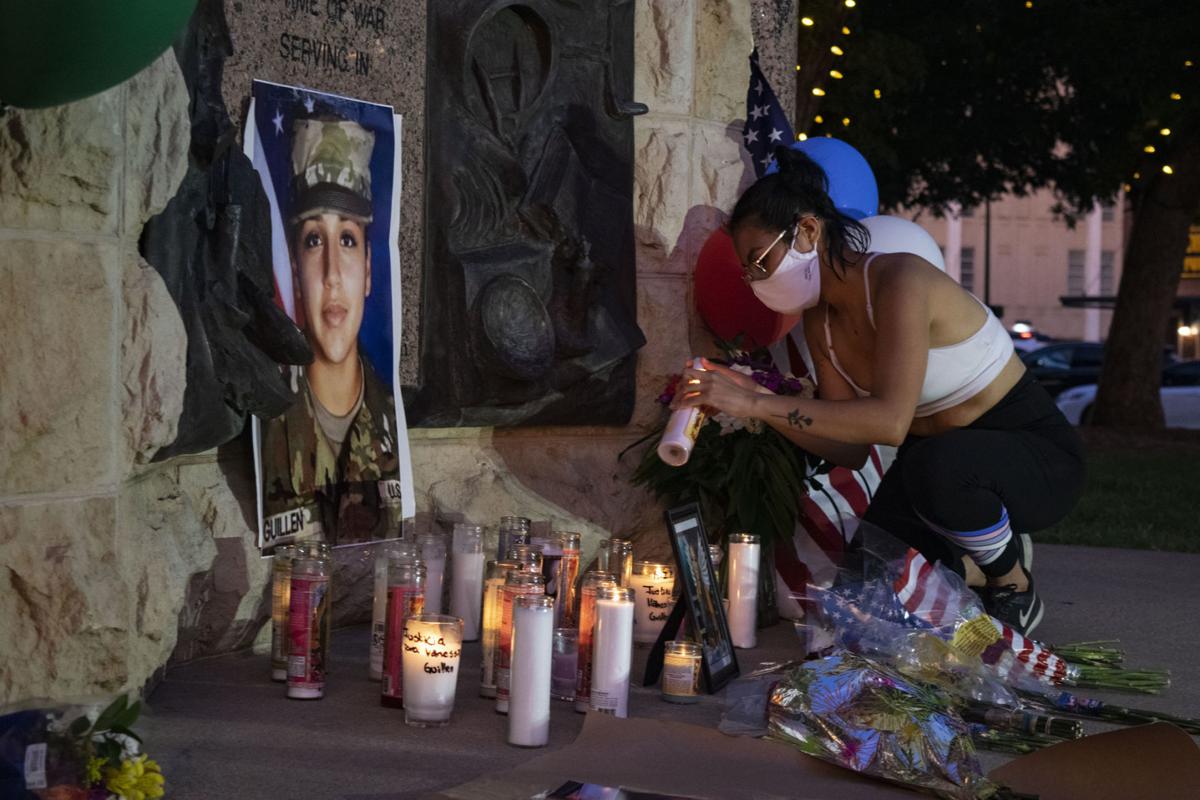 A demonstrator kneels to light candles at a memorial for slain Spc. Vanessa Guillen on Friday evening, in front of the Denton County All-War Memorial. 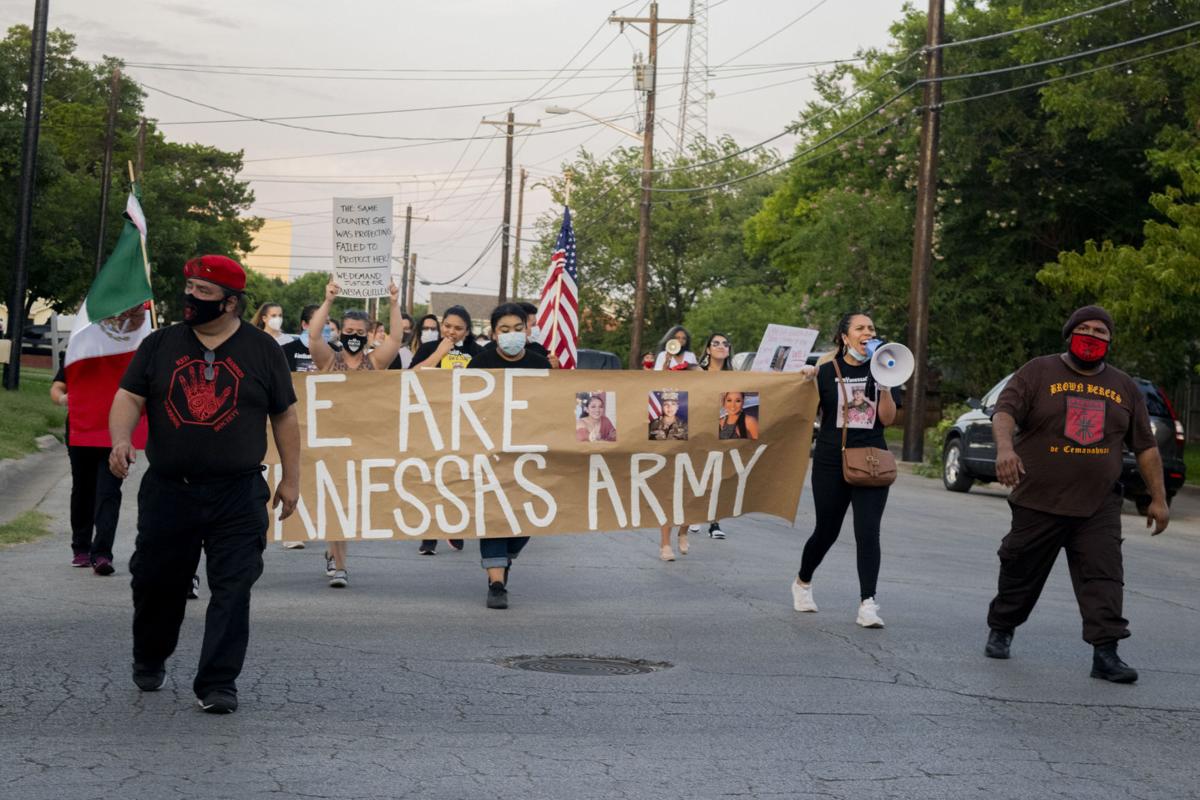 Supporters of slain Army soldier Spc. Vanessa Guillen march from the Courthouse on the Square to Denton City Jail on Friday. Their banner says “We are Vanessa’s army.” 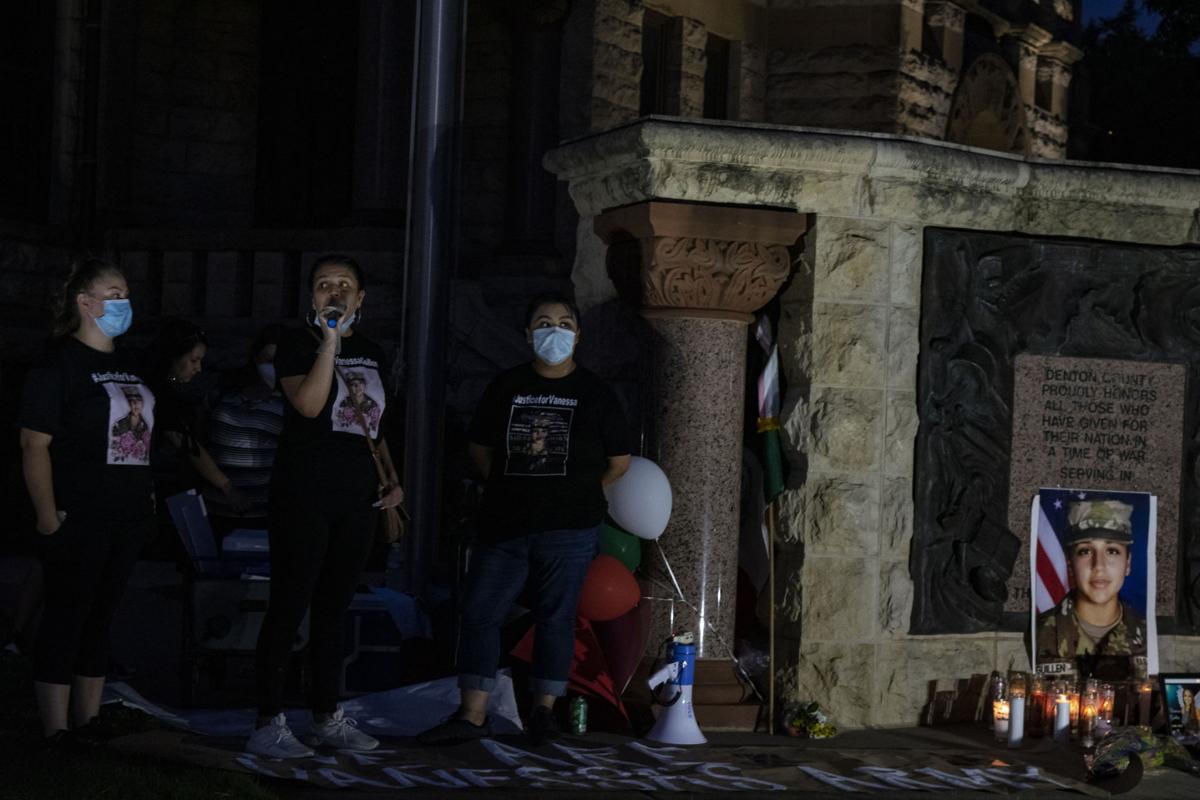 A demonstrator kneels to light candles at a memorial for slain Spc. Vanessa Guillen on Friday evening, in front of the Denton County All-War Memorial.

Supporters of slain Army soldier Spc. Vanessa Guillen march from the Courthouse on the Square to Denton City Jail on Friday. Their banner says “We are Vanessa’s army.”

Demonstrators gathered on the downtown Square on Friday evening to march in honor of Army Spc. Vanessa Guillen, the 20-year-old soldier who was found dead after disappearing from Fort Hood. Investigators say she was bludgeoned to death by a fellow soldier.

Bella Nery, one of the organizers of the local march, began honoring Guillen last weekend with a memorial on the Square. She said the issue is not just one of a Hispanic woman in the Army, but of all soldiers who face harassment.

“This is normal and it shouldn’t be normal,” Nery said. “They shouldn’t be fighting a battle within their own military base.”

The suspect in Guillen’s death, Spc. Aaron Robinson, died by suicide during the investigation. His girlfriend has since been charged with one count of conspiracy to tamper with evidence.

Guillen’s family said she endured sexual harassment while at Fort Hood, near Killeen, but didn’t report it because she didn’t think it would be taken seriously. The Army has launched an investigation into the claims and the base itself as people around the country have called for procedural change.

Nery said she hopes the demonstration in downtown Denton brings light to the situation and the injustice faced by Guillen and her family, who endured months of uncertainty after her disappearance.

“A lot of people, within the week we were out there, did not know what happened to her,” Nery said. “We need to ask for change.”

Andrea Jimenez, another of the event’s organizers, said the demonstrators want congressional action in the form of a bill protecting service members from harassment. She said she wants soldiers to be able to report any harassment to a third party rather than to the base itself.

“Unfortunately, it took Vanessa’s death for us to be open about the situation,” Jimenez said. “We want Congress to see it’s an issue.

Jimenez said that, especially with Fort Hood’s location in Texas, the Denton demonstrators feel it’s their duty to speak up for Guillen and service members like her.

“We’re protesting because a human’s life was taken away,” Jimenez said. “It’s our job to be her voice, and not just hers, but every other soldier who’s going through the same situation.”

The investigations into Guillen’s death and the culture at Fort Hood continue.