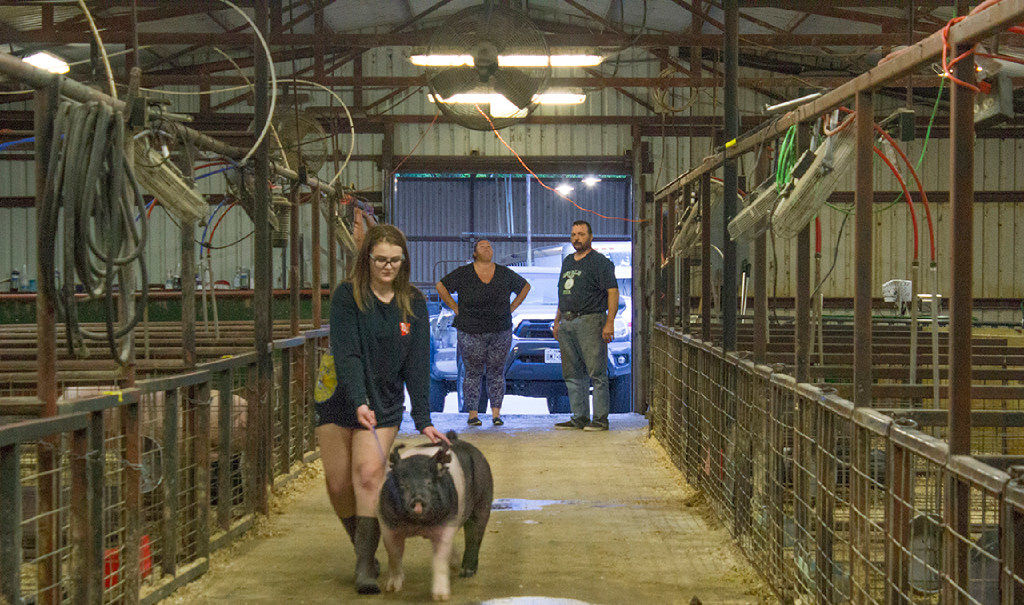 Jason Hardin and Elanie Hilliard watch her daughter Keeley Hilliard walk her pig for exercise before the upcoming livestock show. For the DRC/Elizabeth Watson 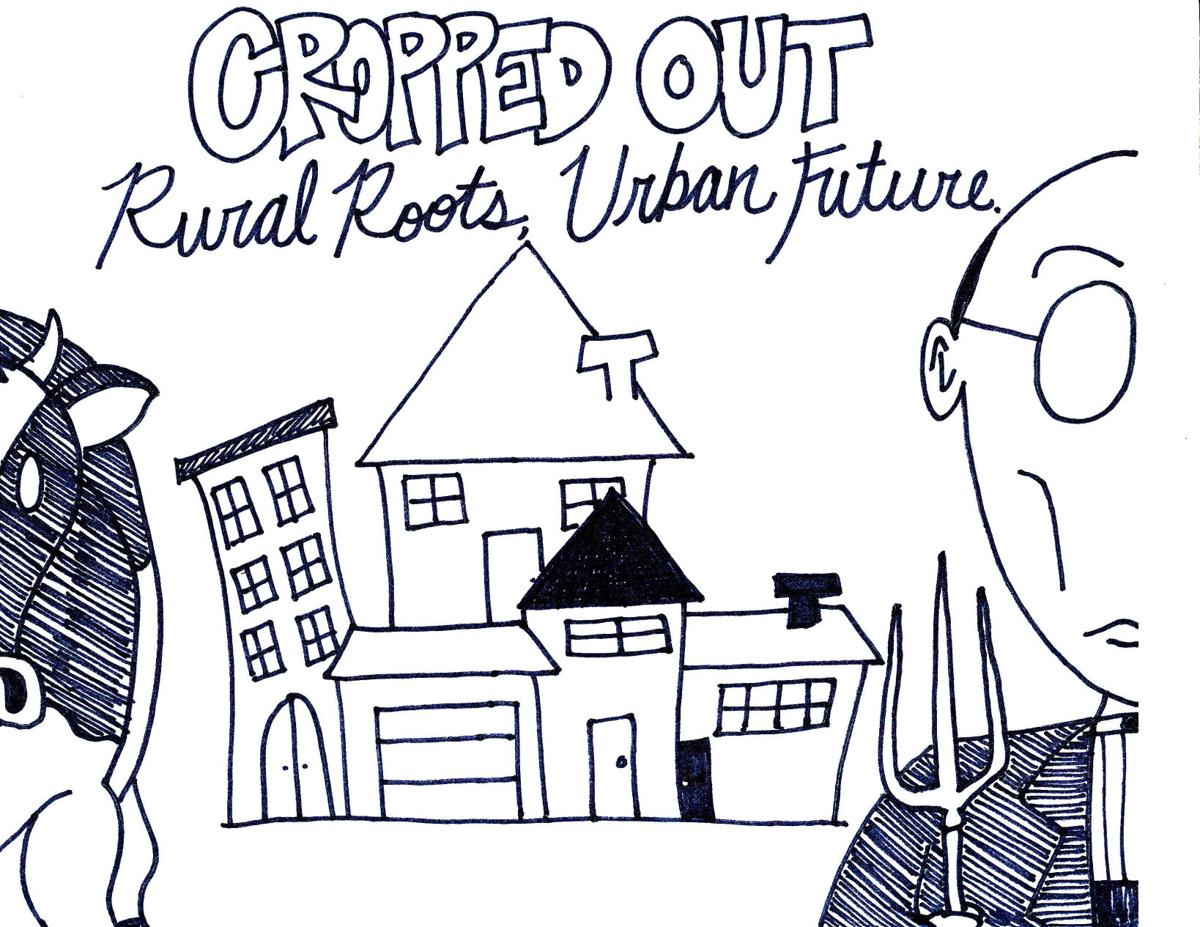 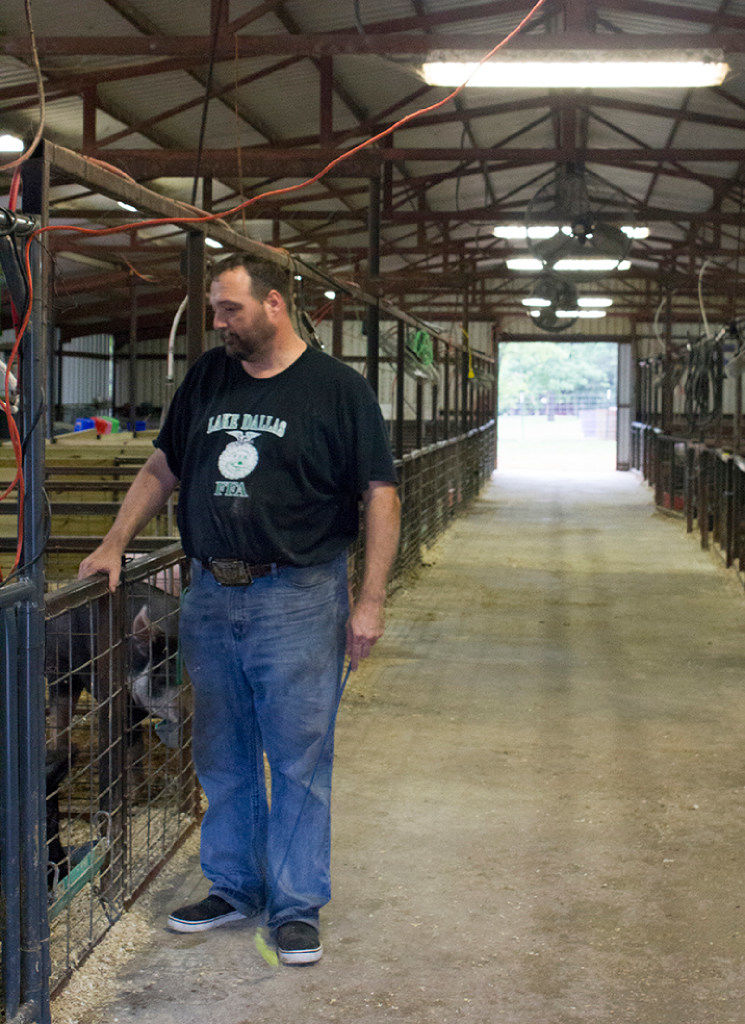 Jason Hardin looks over his son Rylie's pig to make sure he is groomed for the Denton County Livestock show. 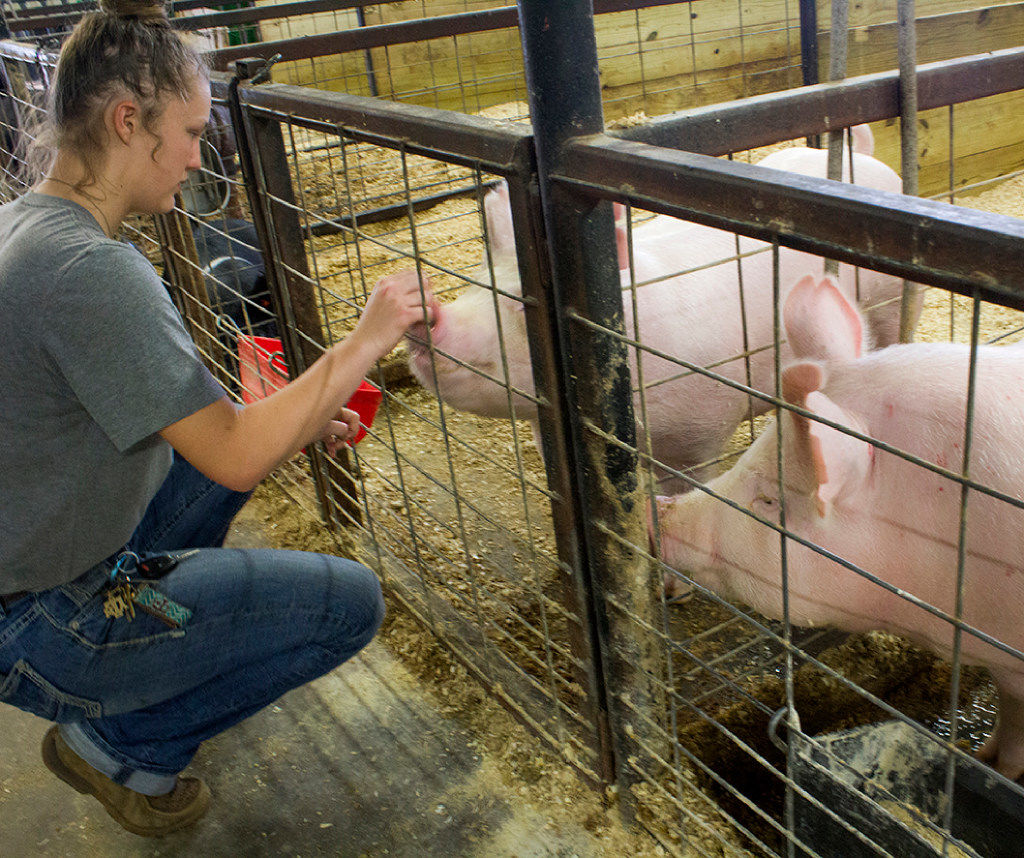 Maurie Varin pets her pigs, Petunia and Piglet, through the stall gates in the FFA barn. The pigs were retired after the Denton County Livestock show in early April. 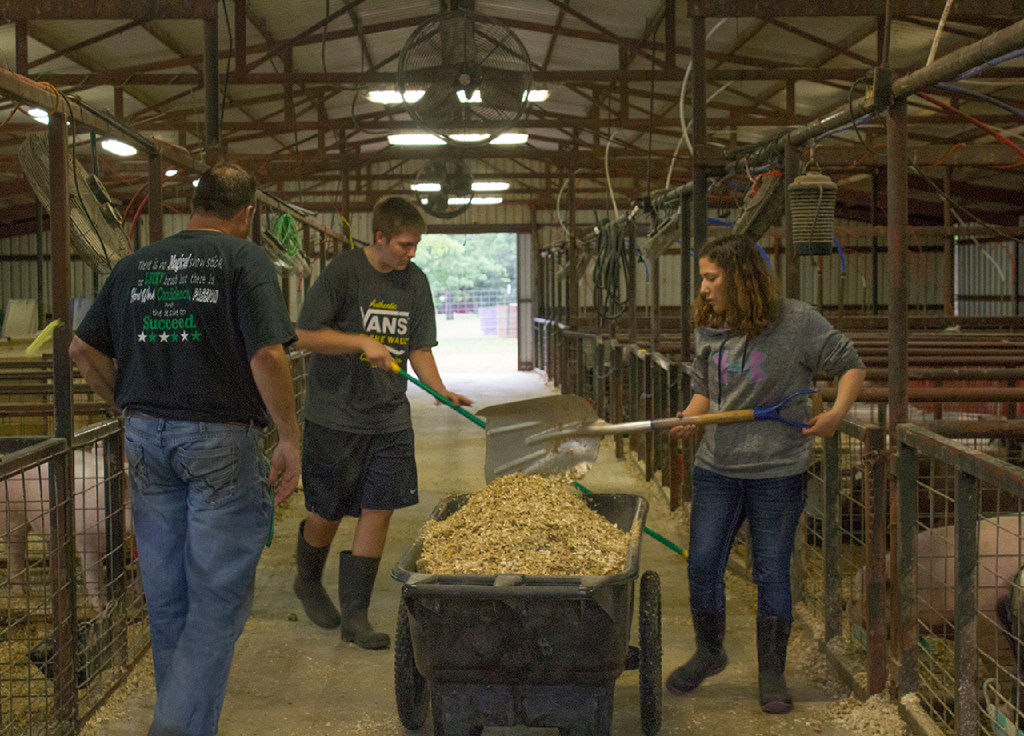 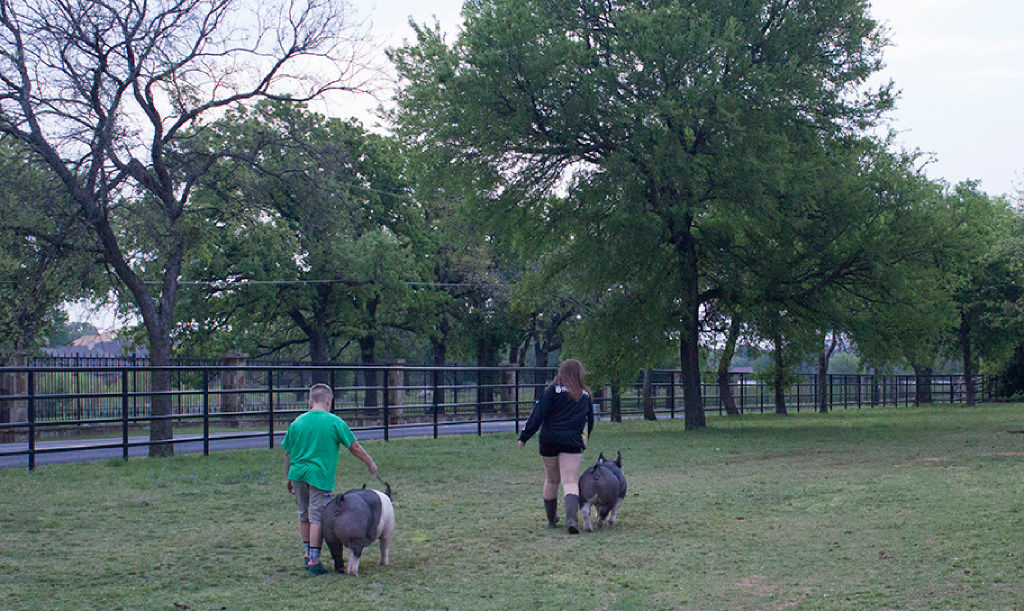 Robert and Keeley Hilliard, two FFA students, walk two pigs for exercise outside the FFA barn, half a mile away from Lake Dallas High School.

Jason Hardin and Elanie Hilliard watch her daughter Keeley Hilliard walk her pig for exercise before the upcoming livestock show. For the DRC/Elizabeth Watson

Jason Hardin looks over his son Rylie's pig to make sure he is groomed for the Denton County Livestock show.

Maurie Varin pets her pigs, Petunia and Piglet, through the stall gates in the FFA barn. The pigs were retired after the Denton County Livestock show in early April.

Robert and Keeley Hilliard, two FFA students, walk two pigs for exercise outside the FFA barn, half a mile away from Lake Dallas High School.

Editor's Note: This is Part 3 of a series we call "Cropped Out." Steady population growth and conversion of rural farm and ranchland into residential, retail and commercial developments have created a clash of cultures on the road to urbanization in Denton County. Students from the University of North Texas Mayborn School of Journalism reported and wrote the stories. UNT professor George Getschow, a former Wall Street Journal reporter and editor, edited the stories for exclusive publication in the Denton Record-Chronicle.

LAKE DALLAS — A squealing 230-pound pig careens around the corrugated steel barn, tugging against a snare looped around its snout. Maurie Varin, a lanky 16-year-old, struggles to keep the agitated animal at bay. Jason Hardin, a tall, barrel-chested man, struts across the barn and pokes a syringe into the pig's neck.

"What was all that?" asks the mother of the pig wrangler.

If Hardin, 44, isn't watching football or hunting coyotes on a friend's farm, he is teaching agriculture classes at Lake Dallas High School and advising the local FFA chapter, known as "Team Hardin."

When it comes to teaching agriculture, Hardin is in a league of his own. During the past year and a half, he's been in charge of the school's chapter of FFA, formerly known as Future Farmers of America.

Team Hardin has won numerous show competitions, pulling in $100,000 in award money and scholarships for his students. Hardin has reinvigorated the high school's sense of pride in agriculture education, and inspired a new generation of young men and women born and raised in the city to value and appreciate a way of life as far removed from their orbit of experience as Mars.

The amount of Denton County land devoted to crops and ranching shrinks each year. But the relentless spread of urban culture does not deter Hardin from championing the county's agricultural heritage. He is a tireless crusader in teaching self-reliance, resourcefulness and other important values that spring from Denton County's rural roots while adapting to the ever-changing North Texas landscape.

According to students at the school, enrollment in classes was falling. Faculty members were no longer training students in the arcane art of animal husbandry — the breeding and care of farm animals. The FFA barn became dilapidated and cages stood empty. Half the floor was nothing but dirt. And parts of the arena didn't have walls to keep animals in and keep out dust, high winds and bad weather.

Instead of competing against other high school students enrolled in FFA programs, Lake Dallas High students mostly competed against each others.

All that changed when Hardin took command of the agriculture program in August 2015.

Hardin's commanding presence and tough top-down managing style freaked out some of the parents accustomed to laissez-faire attitudes toward FFA competitions. Hardin insisted on supervising all tasks — from exercise routines to feeding schedules. He took students to task whenever they let Team Hardin down.

"Hardin and I butted heads on what needed to be done when he got here," said Monty Hilliard, a parent of an FFA student who was slow to embrace Hardin's gung-ho style.

But in time, parents began to realize Hardin's 40 years of experience in ranching, rodeos and teaching made him an ideal teacher and mentor to students who had never laid a hand on a pig in their lifetime. What Hardin discovered — much to his surprise — is that the kids who grew up in cities adapted to his agricultural science programs better than the kids who grew up on farms and ranches.

"Urban kids pick up things easier," Hardin says. "They don't come at me with, 'Well, my mama does it this way.' They just listen and learn, and do just as well."

But there are struggles. Many of the urban kids have trouble coming up with money to purchase, raise and feed the animals. The price of the pigs, feed and bedding material, for example, can cost up to $2,000 a year. The school spent $16,450 during the 2016 school year to transport more than 40 pigs and 20 students to FFA show competitions across the state. The high school also provides trailers to haul the students' pigs to competitions around the state.

Maurie's mother, Shelly Varin, says she puts aside hundreds of dollars all year for the care and upkeep of her daughter's pigs, Petunia and Piglet. She and her daughter, who live in a suburban enclave in Corinth, had never owned or cared for pigs before Maurie decided to join FFA.

Maurie quickly discovered that raising pigs and entering them in shows captivated her like no sporting event ever could. Now, she dreams of having her own farm someday occupied with a large drove of pigs treated with the sort of high-level care and upkeep demanded by her teacher.

Hardin works hard to make sure the price of a pig doesn't prevent his low-income students from participating in FFA programs. He purchases various breeds of pigs from hog farmers and breeders from all over the region, ranging from $300 to $1,000, so families can select a pig that suits their budget. If their pig performs well in livestock competitions, the parents usually can sell their son's or daughter's pig at a handsome profit.

Jason Hardin's mother, Jimmie Hardin, raised him on a horse ranch in Aubrey. His father died when he was 5. Jimmie pushed her son to go to college. He graduated from Tarleton State University in 1995 with an agricultural education degree. His dream was to inspire students to care about ranching and farming as much as he did.

"I had a really bad ag teacher growing up," Hardin says. "I want my kids to have the best they can for what they put into this. They deserve to learn the right way to raise animals."

The FFA barn, located about a mile south of the high school, is on a two-way street with ranch homes on one side and large suburban homes on the other. Since most of the students in the school's agriculture programs live in small homes within the city, they don't have room in their backyards to raise livestock. So the pigs are kept in the FFA barn, and the students go to the barn every day to feed their pigs.

Hardin shows up at the barn at about 6 p.m. every day in a T-shirt and jeans to work with his students and their animals. He notices a bunch of his young wranglers milling around the barn getting food and fresh bedding for their pigs.

One student corrals his pig into an empty stall to hose off the dirt and wood chips on her backside. A piercing squeal signals that one of the pig owners has arrived, and it's feeding time. When Maurie pours corn and protein pellets into Petunia's trough, she turns as quiet as a church mouse.

For hours pigs are taken out and walked outside for exercise. Pigs get whacked in the neck with a small whip to train them to move in lockstep with their owners. But the training doesn't always go as planned. Rylie, Hardin's son, jumps out of the way of a runaway pig.

"Don't be afraid to whack 'em!" Hardin shouts at his son as he chases after it.

Rylie and his sister, Mackenzie, began showing livestock before they were 8 years old. Both have won many stock show awards working with their dad. But when Mackenzie started high school in 2014, she lost interest in showing pigs and joined her high school's drill team as a dancer.

Mackenzie's mother, Carrie, didn't value Hardin's farming ethos as much as he did. His long hours and long road trips away from home created friction between them. In 2011, they divorced.

Hardin acknowledges his devotion to animals and the kids who raise them makes him less than an ideal husband to someone who likes city life. He says he also lost two girlfriends who couldn't understand his devotion to the agrarian way of life. While Mackenzie lives with her mom, Rylie is still enamored with the farm life as he moves into high school.

Hardin's attempts to instill farm values and rural customs in his students can sound like sermons. He's like a modern-day Moses, handing down the Ten Commandments in the agrarian way of life to his young disciples.

One day, he spoke eloquently about a legendary figure in agriculture — Temple Grandin, an educator who has autism and who is deeply committed to treating livestock humanely. Her philosophy, Hardin pointed out, generated higher-quality meat and healthier offspring. It also inspired a new generation of farmers to emulate her humane farming practices.

On another day, Hardin enthralled his students with a lecture on the etiquette of arena showmanship and how to capture the judges' attention.

"You have three minutes to impress a judge and then it's over," he said.

A few years ago, Hardin overheard an FFA judge recalling a pig that pranced and did a victory lap in the arena. Hardin never forgot the prancing pig. As soon as he got back to Lake Dallas, he began teaching a student how to get her pig to practically dance every time it was released from its pen.

No wonder Hardin was rather pleased a year later when his student won an award from the same judge.