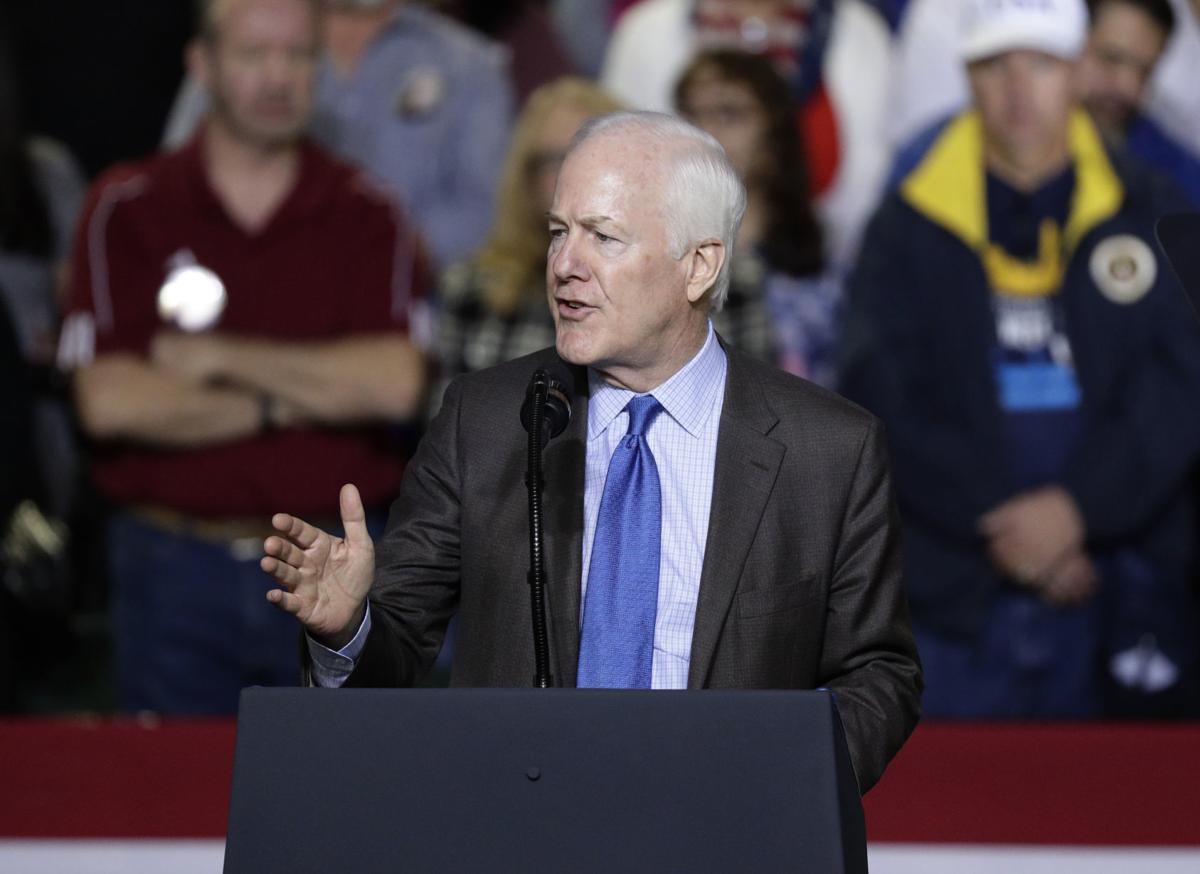 WASHINGTON — Some jurors slouch. Some take notes. Those lucky enough to have desks in the back row are apt to stand and stretch as the hours pile up in the impeachment trial of President Donald Trump.

TV viewers can’t see it, but U.S. Sen. John Cornyn, R-Texas, is most apt to listen with hands folded and brow furrowed, suggesting the sort of intense concentration that befits an appellate court justice, which he used to be.

Off the Senate floor, too, he projects even-handedness and a reasonable air: He’s open to hearing from witnesses, he says, and he’ll weigh the evidence before making up his mind.

In fact, like nearly every senator on both sides, he has made up his mind and will not be moved.

But if you want the more caustic version, you’d need to catch Cornyn on conservative talk radio. Or check your inbox for a campaign email blast like this one he sent as House impeachment managers delivered their case:

“I’ll listen to the Dems’ insane argument for President Trump’s removal ... . But I’ll be a force for truth. For facts,” Cornyn wrote supporters. “I will FIGHT to make sure that their radical argument for removal goes NOWHERE. I will fight [for] our president’s exoneration.”

He’s hardly the only Republican using impeachment to drum up donations. Democrats jockeying for a shot at Texas’ senior senator as he seeks a fourth six-year term have likewise kept up a stream of impeachment-themed attacks.

The stakes for Trump and the republic can’t be overstated. The politics of the fight are fairly predictable.

Targeted Republicans like Cornyn won’t dare show any daylight between themselves and the embattled president, and Democrats will try to exact a price for that loyalty.

“Pretty sure an impartial juror doesn’t say things like ‘I will fight to make sure their radical argument goes nowhere,’” one of those challengers, M.J. Hegar, noted in an appeal to Democrats.

By keeping a relatively low profile, Cornyn avoids needlessly antagonizing the millions of newcomers to Texas who weren’t constituents the last time he was on the ballot.

“He understands what he needs to do. Obviously he’s not going to vote to convict Trump,” said Matthew Eshbaugh-Soha, chairman of the University of North Texas political science department. At the same time, he added, Cornyn and other Republicans “don’t want to give the appearance that they are not taking this seriously because most Americans support a fair process and ... appearances still matter.”

Cornyn avoids defending the pressure tactics the president used against Ukraine in the bid to secure a corruption probe against former Vice President Joe Biden. He’s not shy about taking up the cause in other ways. He’s especially comfortable attacking the fairness of the process and accusing Democrats of bloodlust to depose Trump.

Still, he’s less outspoken and acerbic than some of his colleagues. He gave up his post as GOP whip just over a year ago, forced out of the No. 2 leadership post by party-imposed term limits.

U.S. Sen. Ted Cruz, for instance, has made a beeline to the TV cameras during breaks in the trial. Cruz, R-Texas, aides blast out real-time rebuttals and nightly recaps, under the logo “Cruz impeachment war room.” He launched an impeachment-focused podcast.

“What we have seen from Republican senators across the board is a fealty to Trump, and that they are afraid to cross him in any way, because the most important thing to them right now is their base,” said Jessica Taylor, the Senate editor at the nonpartisan Cook Political Report. “Trying to get your base out is the most important thing.”

She noted that Cornyn can’t project even-handedness indefinitely. “Ultimately he’s going to have to take a vote. It’s going to be on the record,” she said.

Chris Wilson, Cruz’s pollster in 2018, sees little impact from the impeachment trial on Cornyn’s prospects, absent a bombshell that hasn’t yet surfaced.

“What we’ve seen so far in national data suggests that nothing much has changed as a result of the trial. Republicans are still strongly with the president and Democrats are strongly against,” Wilson said. “That would suggest that Cornyn is in about the same situation he was before the trial started, a favorite for reelection.”

The Cook Political Report rates the race as solid Republican, though analysts are keeping an eye on Hegar and others to see if they can break through, as former U.S. Rep. Beto O’Rourke, D-El Paso, did later in 2018 against Cruz.

O’Rourke held Cruz below 51%, putting a scare into Texas Republicans, who haven’t lost a statewide election since 1994.

“There’s obviously no reason for a senator from Texas, running statewide, to take any chances crossing Donald Trump. ... It’s Donald Trump’s party right now,” said Jim Henson, director of the Texas Politics Project at the University of Texas at Austin.

At the same time, he doesn’t see the issue doing Democrats much good.

“Nobody needs to go out and beat the bushes among Democrats to say that Donald Trump’s a bad president. … It’d be hard for Democratic attitudes to get any more intensely negative about Trump,” he said.

During one break in the House managers’ three-day argument, Cornyn downplayed the presentation.

“We haven’t heard anything new,” he told reporters. “What we ought to be presented is evidence by witnesses that have personal knowledge.”

And U.S. Rep. Joaquin Castro, D-San Antonio, chided him on Twitter: “You voted nine times against getting more information.”

Cornyn has insisted that he’s open to talking about calling new witnesses after opening arguments. But he also maintains that if House Democrats weren’t so impatient about impeaching Trump last month, they could have taken more time and allowed subpoena fights to play out in court.

Senate Republicans unanimously shot down Democrats’ efforts at the outset of the trial to compel testimony from key witnesses: former national security adviser John Bolton and acting White House chief of staff Mick Mulvaney and others Trump barred from cooperating.

Democrats taunted that Cornyn, among others, wants it both ways — denigrating the case against Trump as old news while refusing to allow further investigation.

An ABC News/Washington Post poll published Friday found that 66% of respondents nationwide want the Senate to call new witnesses, while 27% would be content to see a verdict without more testimony.

“If exercising their constitutional duty as U.S. senators is so boring to these Republicans, why pass up the chance to learn new information from documents or witnesses with first-hand knowledge of Trump’s conduct?” asked the Democrats’ Senate campaign arm, citing Cornyn’s comments.

“You’ll see Chuck Schumer and others saying that there’s a cover-up because additional witnesses weren’t called, which is pure baloney,” he said Friday on the Mark Davis radio show. “The American people, because they’ve been able to see this on television in an entirely transparent sort of way, will have the confidence that everything that could’ve been presented was presented.”