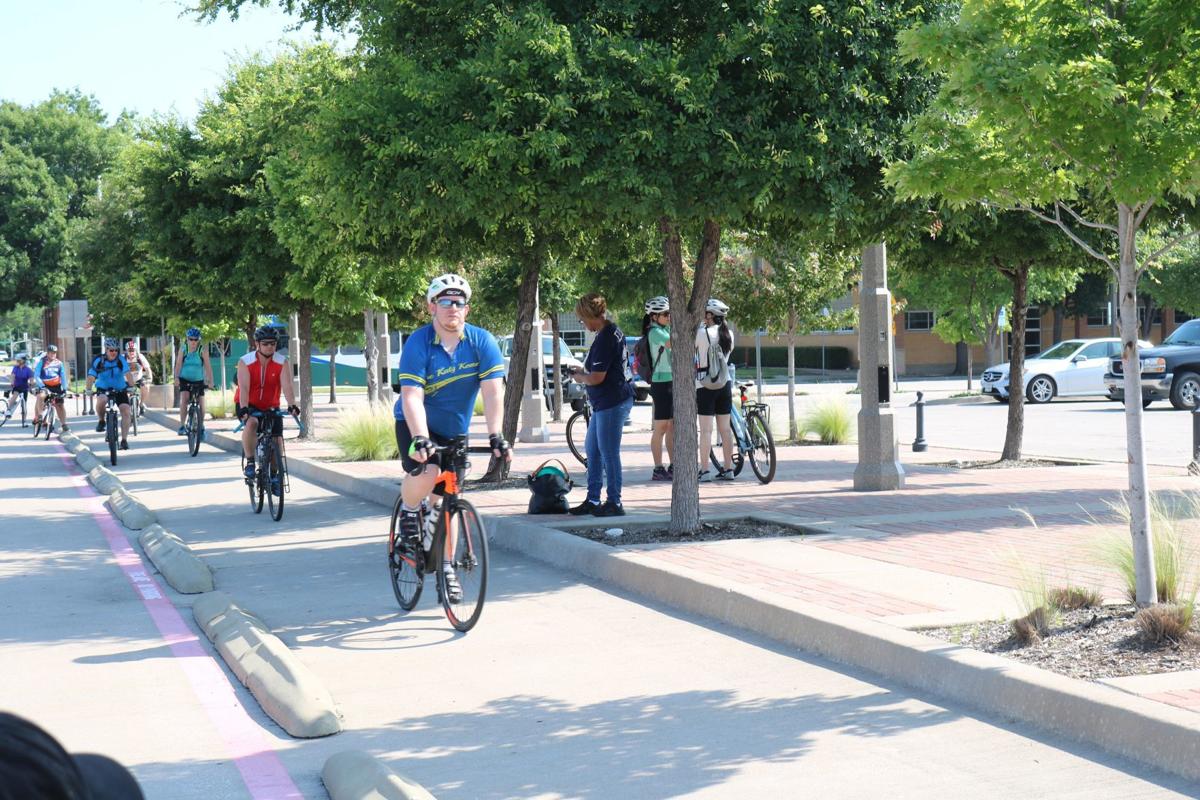 The 19-mile A-train Rail Trail is made to be accessed by everyone — bike riders, runners and train passengers, both tourists and residents. 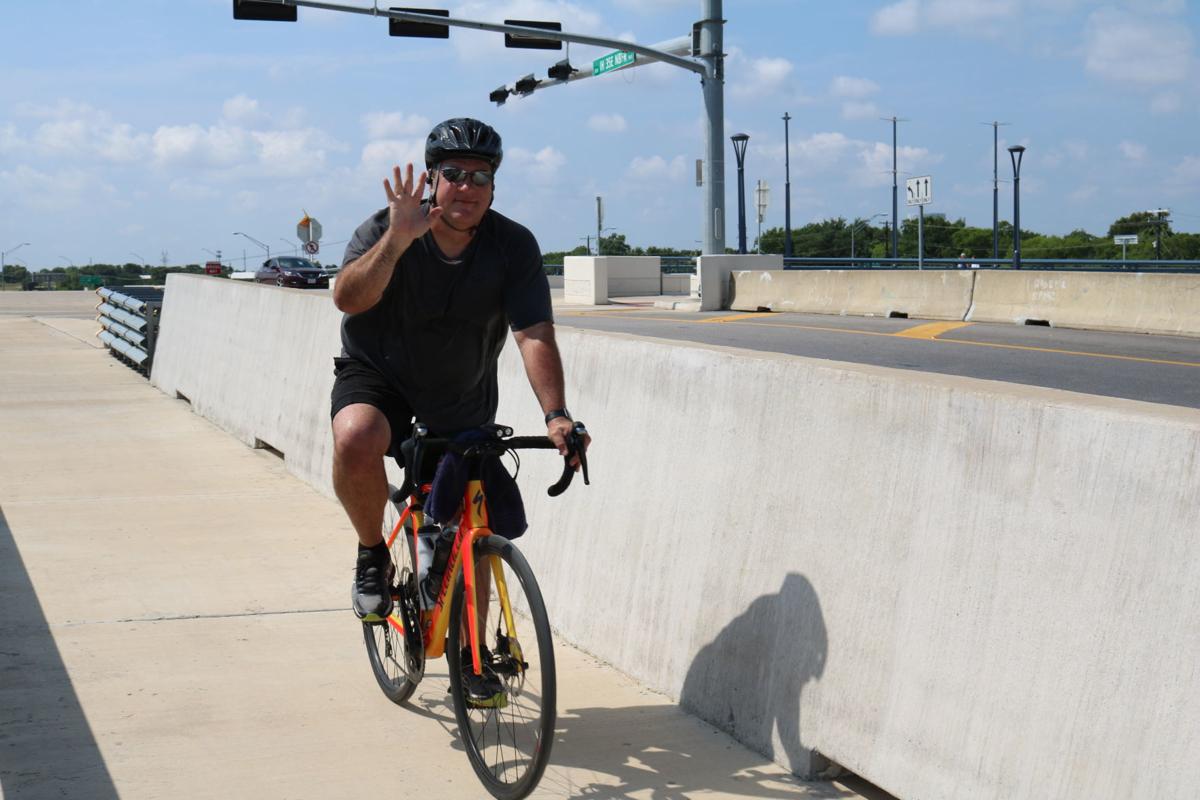 The 19-mile A-train Rail Trail is meant for tourists and residents alike, made to be accessed by everyone including bike riders, runners and train passengers alike.

The 19-mile A-train Rail Trail is made to be accessed by everyone — bike riders, runners and train passengers, both tourists and residents.

The 19-mile A-train Rail Trail is meant for tourists and residents alike, made to be accessed by everyone including bike riders, runners and train passengers alike.

The A-train Rail Trail, connecting five A-train stations from the Downtown Denton Transit Center to Hebron Station in Lewisville, recently finished the final construction phase, making the trail available to all who are interested.

Currently, the Denton County Transportation Authority is hoping Lewisville will start construction this summer and complete a section of the trail on the new Valley Ridge Boulevard extension between College and Mill streets, said Adrienne Hamilton, senior manager of marketing and communications for DCTA.

In addition, the preliminary planning to extend the trail south from Hebron Station in Lewisville to Carrollton is underway with the North Central Texas Council of Governments working with stakeholder agencies across North Texas to put this plan in motion, Hamilton said.

“This is a significant milestone for us at DCTA,” Hamilton said of the completion of the Rail Trail on Dec. 30. “This is a viable mobility option that provides a multitude of benefits for the mini-community we serve, such as economic and transit-oriented development opportunities for cities along the trail, recreational option for affordable exercise and just an enhanced quality of life that it provides.”

The 19-mile trail is meant for tourists and residents alike, made to be accessed by everyone including bike riders, runners and train passengers, Hamilton said. The A-train Rail Trail incorporated the Denton Branch Trail and the Lewisville and Highland Village trails into its system.

With multiple tourist attractions near the trail, Hamilton said she has seen a lot of positive feedback from those who have taken advantage of the trail since DCTA started construction and finished the first phase of construction in 2011 of the Denton Branch Rail Trail.

“I was in Denton two years ago to attend trainings at the University of North Texas and went running on the trail,” licensed professional counselor Mary DeRaedt, 46, said. “I am a psychotherapist, and the counseling department at UNT, Denton, offers advanced trainings in topics like play therapy. My trips to the area were for those trainings.

“Both times I traveled there, I ran on the trail and enjoyed it immensely. … It was a lovely but not shady enough run.”

DCTA spent a total of about $14 million with grants and donations broken up between construction phases, according to DCTA’s website.

Phase one was funded by local money, and phase two was funded by Federal Highway Administration grants administered by the Texas Department of Transportation, Denton County, the NCTCOG and DCTA, while phase three was funded by Interstate 35E project funds, according to DCTA’s website.

“[The trail] really is an alternative option for you to get to your desired destination,” Hamilton said. “That can help with saving money, … we can help people with providing affordable options, so you can spend money on other things that you would like too.”

However, DCTA has experienced hardships with incidents where people chose to ignore some of the safety tips and warnings alongside the trail, Hamilton said.

“We have trail signage as well as the crossing arms that we have,” Hamilton said. “Our Rail Trail runs alongside our commuter rail line. There are some sections where it’s right by our rail line, so we have the crossing guards that come down to basically encourage and force folks to stop before crossing. So if those are not abided by, then a chance for incident increases.”

The trail was listed in the top five scenic trails for the Dallas-Fort Worth region by Only in Your State, a website and newsletter for travelers.

Comments received by DCTA on the A-train Rail Trail include: “This has become one of my favorite trails in North Texas, and it’s where I ride nearly 100% of the time now that Highland Village trails connect through Double Tree Park. Thanks for this wonderful cycling venue!” and “A big thank you to those that had the vision for this trail and started the planning/process. This is great news, and the trail is a fantastic amenity for our region,” according to comments provided by Kayla Laird, communications coordinator for DCTA.

“I loved the trail,” DeRaedt said. “It was scenic and wide enough for both bikes and runners to share. It was pretty flat, if I remember correctly, which made the running more steady and I could run faster. Denton is such a cute town, also, so the place I joined the train was right by a lovely train station in town, and that was convenient as I was staying close to downtown.

“The only negative is that the heat there was more intense than in [Washington] D.C. As a result, I got a mild heatstroke for the first time in my life,” she said. “I was fine, but the next time I ran, I made sure I was properly hydrated. Texas heat is no joke.”

DCTA hopes to receive more funding in the future to add more safety features to the trail, Hamilton said, and to make the trail as accessible as possible by making improvements over time with the feedback received.

“We always want to have a trail that connected all of our members’ cities and also cities alongside our A-train rail line that could also take part in that,” Hamilton said. “There are other different cities alongside that that do have access to the trail that we thought was really important at DCTA. We really want to improve mobility, economic development, air quality and livability.”