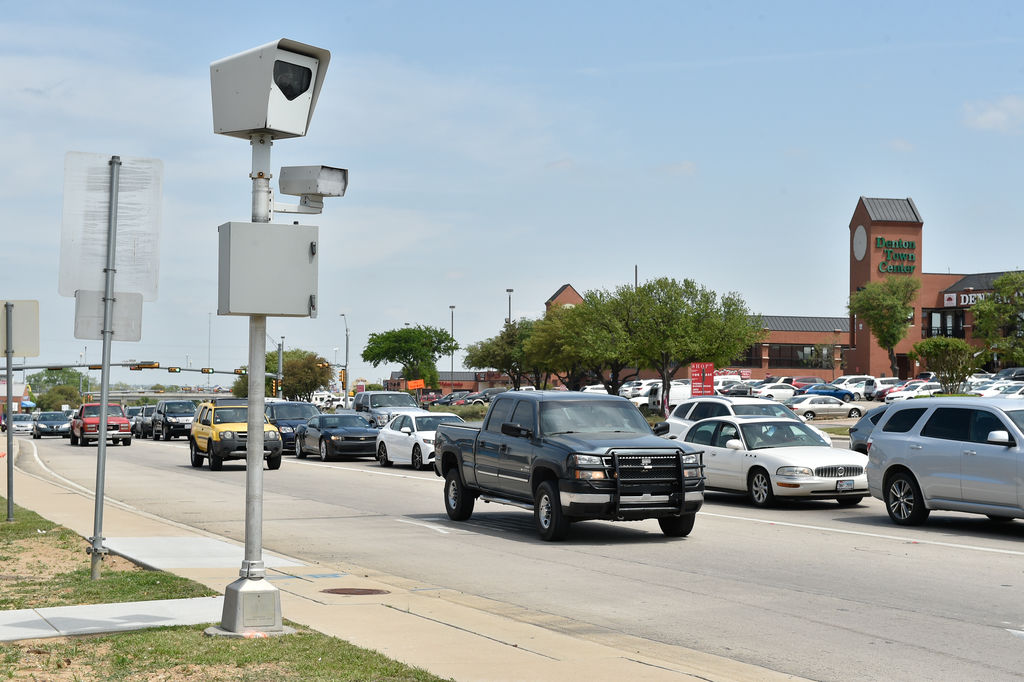 Motorists drive past a red light camera at the intersection of Loop 288 and Interstate 35 E. 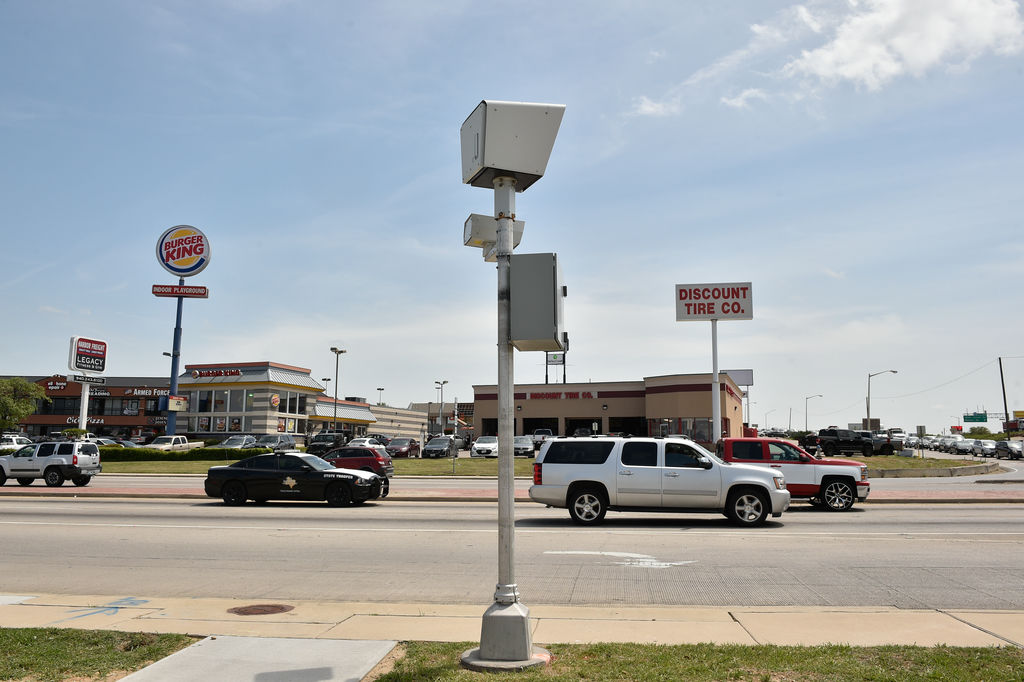 Red-light cameras are designed to make streets safer, but they also have led to much larger paychecks for a few Denton police officers.

Denton Assistant Police Chief Scott Fletcher accrued $122,839 in overtime pay from 2014 to 2016 from the city's red-light camera program, which he oversaw at the police department since the program's inception in 2005, according to city officials and payroll documents obtained through an open records request.

Two other supervising officers - Lt. David Hildebrand and Sgt. Daryn Briggs - also earned between $10,000 and $23,000 in overtime pay per year from the program in that time frame, records show.

Red-light cameras were installed in Denton in 2006, the year after the city entered into a contract with Redflex Traffic Systems.

The cameras, which now are installed at 11 intersections in Denton, run 24 hours per day and take photographs and a short video of vehicles that run red lights.

After Redflex investigators and a Denton police officer confirm a violation, the registered owner of the vehicle receives a citation by mail with a $75 charge.

Since 2007, state law has required cities to keep red-light ticket fees in a specific fund that pays for capital improvement projects, including new street lights and pedestrian crosswalks. In Denton, that "traffic safety fund" netted about $2.5 million in revenue during the 2016-17 fiscal year, according to city budget documents.

In an emailed statement, Denton Police Chief Lee Howell said "the city acknowledges that Assistant Chief Fletcher has received a disproportionate share of overtime" from the traffic safety fund.

"There is no evidence of misconduct by any city employee related to the red light camera program; however, the amount of overtime was concerning and created an appearance of a conflict of interest," Howell said. "To mitigate any potential conflict and reduce the overall amount of overtime related to this program, the police department has already implemented changes to program administration and provided training for additional officers to review citations."

According to the city's overtime policy, overtime on any job should be allocated "as evenly as possible among all employees qualified to do the job."

Briggs started charging time to the fund in 2012, and Hildebrand in 2014, records show.

The Denton Record-Chronicle made numerous attempts to interview Fletcher about the overtime, but Howell facilitated all questions. He said the department limits the number of officers reviewing violations to "ensure the consistent and fair treatment of alleged violations."

Red-light cameras have been the source of controversy around the country and, more recently, in the Texas Legislature. Supporters say the cameras make streets safer and generate money for much-needed street improvement projects. Critics say they violate due process of law because a police officer doesn't observe the violation in person. Opponents also say the cameras increase rear-end crashes at intersections because of drivers slamming on their brakes to avoid running a red light.

Several Texas Senate and House bills have been introduced over the past two legislative sessions calling for a ban of red-light camera programs or fewer penalties for those who don't pay the tickets. One of the red-light cameras' more outspoken opponents, Sen. Don Huffines, R-Dallas, last year co-authored Senate Bill 88, which would effectively repeal red-light camera enforcement programs across the state. The bill passed the Senate but failed to reach the House.

In a 2017 news release, Huffines said he plans to pursue similar legislation in the next session.

Red-light camera violations are considered civil penalties and don't count against a person's criminal record. If someone fails to pay a ticket, an arrest warrant will not be issued, and it will not count against the person's driving record. Also, Section 707.003(h) of the Texas Transportation Code states that information related to an unpaid red-light ticket cannot be reported to a credit bureau.

As part of the contract, Denton is required to pay Redflex $4,870 for each camera each month. State law started regulating red-light camera programs the following year, requiring the city to pay half of its revenue to the state to benefit trauma centers.

In 2009, Denton amended the contract with Redflex, extending the term of the agreement to expire in July 2014. In 2011, cameras were added at the intersections of Fort Worth Drive at Interstate 35E, as well as East University Drive at Mayhill Road. Then, after the city extended the contract for another five years starting in 2014, more cameras were added at five busy intersections in town, including South Loop 288 and Interstate 35E.

The current contract expires in July 2019.

In the 2015-16 fiscal year, the program generated $2,531,971 and cleared about $646,797, which went into a reserve fund for the following year, according to city budget documents. Puente said the reserve fund contains about $1 million at all times to pay for the cost should the city ever back out of the contract with Redflex. It also includes any leftover money that wasn't used the previous year, he said.

As of September 2017, the reserve fund contained about $2.4 million, Puente said.

In the 2016-17 fiscal year, the fund generated $2,525,900, but the city injected an additional $308,595 from the reserve fund that year to pay for $826,000 worth of pedestrian and traffic safety programs. The city didn't have any leftover money that year, budget documents show.

Fletcher started at the Denton Police Department in 1992. He has enjoyed a healthy chain of pay raises and promotions since then, from sergeant to lieutenant to captain to deputy chief, according to employment records. As assistant chief, he makes $133,434 annually.

Briggs started at the police department in 1993 and earns a base salary of $98,445, records show. He is not related to Denton City Council member Keely Briggs.

Redflex spokesman Michael Cavaiola said the company receives the initial photos and videos of an alleged violation from its cameras. Three investigators with the company review the evidence and make sure it's a violation according to the city's laws, he said. Then, the company submits the photos and short video clips into a shared database, where approved police officers log on and confirm the violation, he said.

"That's one of the biggest misconceptions about the cameras - that the process is automated," Cavaiola said. "The only thing about it that's automated is when radar senses you ran the light."

Gary Craig, who retired in 2015 after 32 years at the Denton Police Department, serves as the department's customer service representative for the red-light camera program. Howell said Craig isn't authorized to review footage as a civilian. He fields calls from citizens who have questions about violations or the program in general, Howell said.

Craig occasionally attends hearings for the people who dispute the violation, said Municipal Court Judge Robin Ramsay. Craig primarily testifies on behalf of the videos' authenticity rather than the content of the video, Ramsay said.

Craig's position is funded entirely from the red-light camera fund, Howell said. Between March 2015 and September 2017, Craig charged a total of 2,508 hours to the fund, according to city financial records.

Craig did not return numerous calls and messages to his office requesting comment.

Howell said Fletcher did not approach the city to start the program. He was assigned by the police chief at the time to research the feasibility of such a program in Denton, he said.

Fletcher has served as the liaison for the program at the police department since 2005, said city finance director Tony Puente, who was a financial analyst at the city that year. Fletcher has gone before the City Council numerous times to talk about the program's benefits and share his extensive knowledge on the subject. Howell called him "the in-house expert administering the complex program" in his email.

During Fletcher's most recent interaction with the council on March 27, he said the program is designed to change people's overall driving behavior rather than prevent all accidents.

"We're not going to eliminate all accidents because driving behavior is independent every day and based on the choices you make at that point in time," he said. "So someone is always going to make the wrong choice and hit somebody. We're always going to have violations, but we're trying to add an enforcement piece onto that."

A 2016 study by the Insurance Institute for Highway Safety found that rates of all fatal crashes at intersections with traffic signals in cities with camera programs were 14 percent lower after cameras were turned on than what would have been expected without cameras.

During a City Council meeting in March, Fletcher presented additional statistics about right-angle crashes that suggest the cameras may improve safety.

A right-angle crash, also known as a side-impact or T-bone collision, usually results from one vehicle driver failing to yield right of way to another.

At Denton's seven other intersections with cameras, which were installed in 2011 and 2014, police recorded a total of 18 right-angle collisions in the year before cameras were installed.

From 2014 to 2017, 12 right-angle crashes occurred in those seven intersections, the data shows.

Fletcher added that since 2014, there have been no rear-end crashes at any of the 11 Denton intersections with cameras.

"When we first started this, that was one of the big rallying cries - that rear-end crashes go up with cameras," Fletcher told City Council members. "But dating back certainly through 2014, we've had zero rear-end crashes at any of the red-light cameras, which is at least indicative to me that people are adjusting their behavior of what to do when they come to a yellow light."