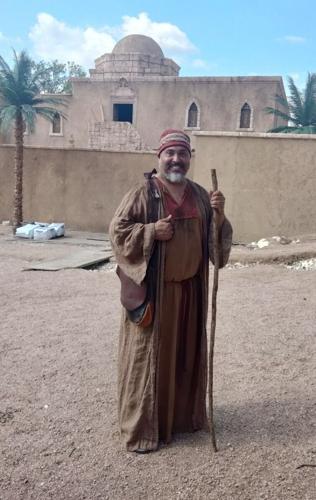 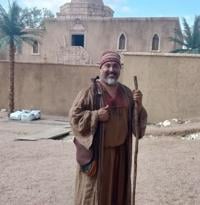 Paul Juarez appears in costume for the filming of “The Chosen,” a multiseason streaming drama looking at the life of Jesus Christ. Loves & Fishes Productions films the series in Midlothian. 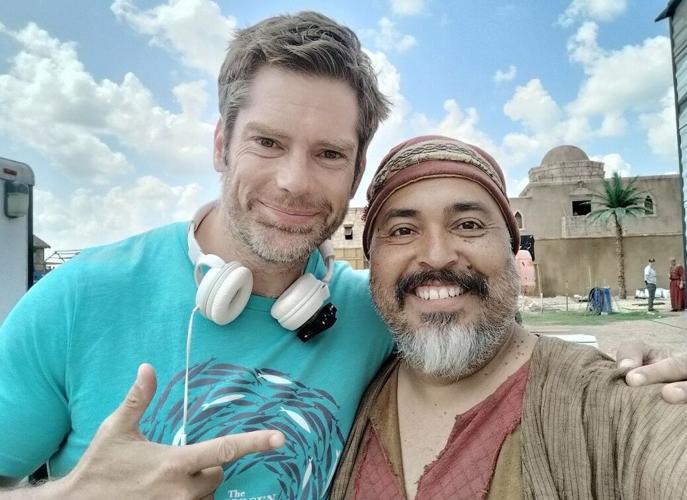 Paul Juarez, right, is shown with Dallas Jenkins, the creator and director of “The Chosen,” a multiseason TV drama looking at the life of Jesus Christ. 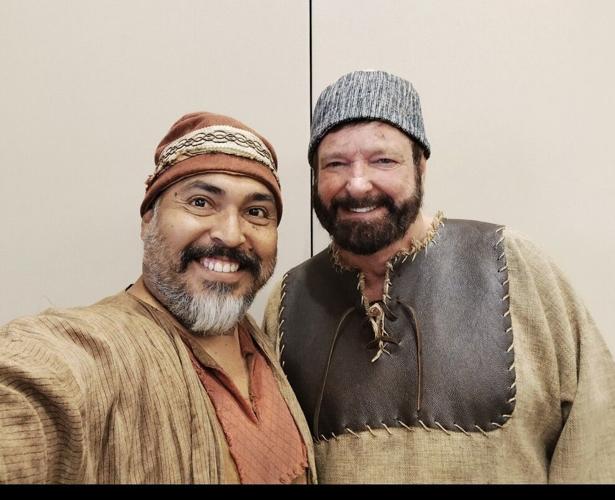 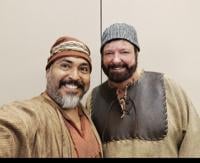 Paul Juarez, left, appears in costume for "The Chosen," a multiseason drama looking at the life of Jesus Christ. 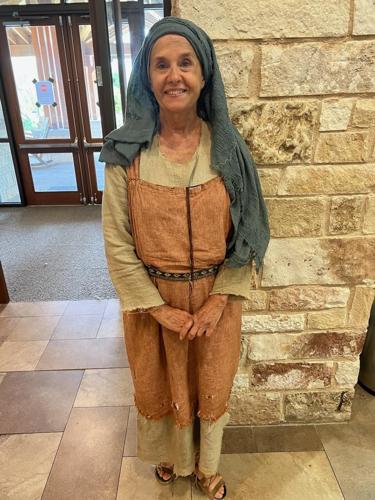 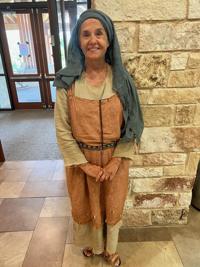 Diane Rhodes appears in costume for her role as an extra in “The Chosen.” The San Antonio resident hopes to keep appearing in future seasons.

In biblical-era robes, the teacher knelt, holding the husband’s injured foot gently and began blowing on it.

He’d spent the past two seasons of The Chosen ministering to the homeless, the disenfranchised, those who didn’t belong, preaching love instead of hate and seeking to break the barriers that organized religion had established, an ideology that would eventually get him killed by those in power.

Surrounded by a crowd, the husband with a broken foot — whom we know as Paul Juarez, the former director of First Refuge Ministries in Denton — had heard about the teacher’s miracles. The lady in front of him had been struggling with back issues, and when the teacher hugged her, she was healed. A child behind him had been blind since birth and gained sight when the teacher kissed the child’s eyes.

Standing before the teacher, the husband’s wife told him they might have to amputate her husband’s foot. The teacher knelt before him, lifted the disabled man’s robe to examine the injured foot and said it looked bad.

Juarez, as the husband, began crying.

Jesus, the teacher, blew on his foot and healed it.

The crowd erupted. Juarez’s character began stomping his foot a couple of times, hugged Jesus and started celebrating with the crowd.

“It is really an area in the Bible where these disciples had come to ask Jesus, ‘Are you the one to come or wait?’’’ Juarez explained to the Denton Record-Chronicle in late September, shortly after he had finished filming the scene in Midlothian. “Jesus says, ‘Go back and tell John what you have seen and heard. The lame walk, people with leprosy are cleansed and the blind see. The dead are being raised, and good news is being shared and the mute speaks,’ and then he points over to me and does a long dialogue.”

Word of mouth, Juarez said, is what led to his upcoming appearance in The Chosen, a global binge-watchable streaming phenomenon that has drawn millions of people from around the world to the story of Jesus of Nazareth, told through the eyes of his disciples and those who followed him.

Created by filmmaker Dallas Jenkins, The Chosen has been translated into 50 languages, viewed more than 300 million times and garners debate online among the religious community as if it belonged to Disney’s Star Wars universe, as The Wall Street Journal pointed out in a 2021 report. More than 16,000 people contributed $11 million to make Season 1, released in November 2019, making it the “largest crowdfunded media project in history,” according to a Feb. 14 report by the National Christian Foundation, a nonprofit that helps donors find charitable causes.

“Because the show is free, because we’re doing this outside the system, because there isn’t some studio or network or streaming service writing us a big check, the only way we’re able to do these seasons is because of you,” Jenkins told his millions of viewers in an April 2021 livestream of The Chosen Global Live Event: Season Two Premiere on YouTube.

Juarez appears in Episode 6 of Season 3, which will release its first two episodes in theaters on Nov. 18. The free series is available on The Chosen app, available on Google Play, the App Store and other services, and Amazon Prime Video and other streaming services.

“I don’t know if it was a blessing or an accident that got me a featured role as one of the extras,” Juarez said. “I actually was a person who Jesus healed his foot.”

A buddy told Juarez that The Chosen crew was looking for extras. Juarez decided to send an email to the casting agency with a selfie and full-body picture along with his weight and age. He’d already appeared as an extra in Vindication, a faith-based crime drama series, back in July, Juarez’s wife, Barbie Juarez, recalled.

Vindication was a show of reconciliation and redemption they enjoyed watching. Paul Juarez appeared as an inmate in a jail scene but didn’t have any lines.

“You would have thought that he grew up in the theater,” Barbie Juarez said. “He’s such a drama king.”

In early September, Paul Juarez resigned from First Refuge after seven years leading the nonprofit and told the Record-Chronicle he had “a lot of talents and a lot of things that I think God wants to use me for.”

Brock/Allen Casting agency must have realized this claim because they selected him to appear as a “pilgrim” in Season 3 of The Chosen.

Barbie Juarez pointed out that if she had some time off from work, she’s the type of person who would work on a project around the house. Her husband, she said, was like, “Well, I have some time off. I’m going to be an extra in a TV show.” He said he was planning to go fishing when he decided to submit his photos to the casting agency.

“Not a lot of people think out of the box as my husband does,” Barbie Juarez said.

Out of the box

Paul Juarez was sitting in the makeup chair in Midlothian, where The Chosen is filmed, when he realized he wasn’t just a regular extra like the others in period costume. He had been told he would be a pilgrim but learned he’d been given the role of the husband with the broken foot.

Yet he still didn’t understand the significance.

Then he noticed a couple of the actors who play Jesus’ disciples and realized something was different about his scene.

He was taken to the set where the actor who plays Jesus, Jonathan Roumie, would be appearing. Other actors began joining him on the set. He met the woman who would be playing his wife and discovered he would be featured that day as one of the pilgrims being healed.

Juarez, who ‘s been a fan of the show, laughed and thought she was kidding until some of the actors playing disciples joined them. Roumie, dressed as Jesus, walked up to him, introduced himself and said it would be good to work with him.

When Jenkins, the director, appeared, Juarez was starstruck again and asked if he could take a selfie with them, but was told to wait until after they had shot that day.

After Juarez rehearsed the scene about six times, Jenkins approached and said he was going to change the scene. He wanted Roumie, who Juarez said prays before each scene, to bend down and blow on Juarez’s foot and remove the rag. Juarez then would stomp his foot a couple of times and jump for joy, proclaiming that his foot was healed and give Jesus a bear hug.

They had to shoot the scene several times from several different angles over a two-day period.

“I’m just obsessive-compulsive when I watch movies,” Juarez said. “It gets on my wife’s nerves because I will notice when something is out of place. I tried to put myself in the situation that my foot was broken and how it would feel. I got emotional and started crying.”

Tears were flowing when he appeared in front of Jesus. He started crying more when Jesus told him his broken foot was bad. He cried again after Jesus healed him and began celebrating with the 100 extras gathered around them, all of whom were also fans of the show.

Later, Juarez was sitting at lunch with the other extras. Diane Rhodes, who was one of the 100 extras, noticed him. A veteran extra from San Antonio, she had appeared with other extras for the Sermon on the Mount scene in Season 2 and hopes to continue appearing in the series.

Rhodes and the other extras wondered why Juarez was sitting with them.

“I thought he did such a good job,” Rhodes said. “We all thought he was an actor and didn’t realize that he was one of us. We didn’t know until we were sitting around on the third day.”

Since his appearance in The Chosen, Juarez has been keeping up with casting calls from all over Dallas, Fort Worth and Austin. About a month ago, he landed a role as an extra on Walker, a crime action drama filmed in Austin. He played a nonprofit gala attendee.

He claims the experience was different from what he had experienced on the set of The Chosen, where he said they were treated well by the actors and the cast.

“It was like we were part of a family,” Juarez said of The Chosen.

Juarez said there are a lot of Facebook pages that have casting calls for extras. He has been seeking ones for a Hispanic father or a Hispanic preacher or a Native American extra. But The Chosen series is still on his mind and in his heart.

The series is supposed to run seven seasons. Season 4, Rhodes said, begins filming in the spring, and Juarez said he and his wife hope to take a week vacation for each upcoming season and appear as extras with hundreds of other people like Rhodes who also hope to continue appearing in the beloved series.

“I am an artist, and my mind is an artist’s mind and very creative,” Juarez said. “It is not something I couldn’t do. It’s something that I thought I could do and what I did.”

CHRISTIAN McPHATE can be reached at 940-220-4299 and via Twitter at @writerontheedge.