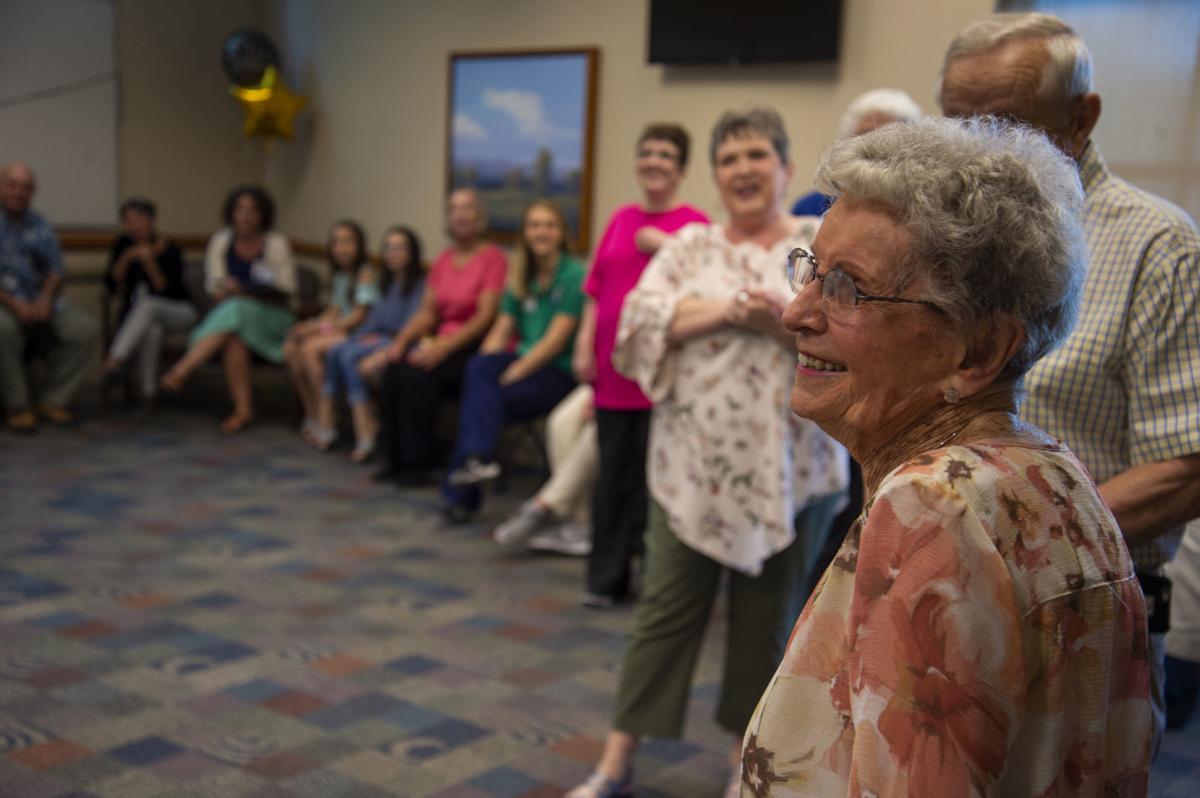 Anna Mae Walter, who turns 100 years old Saturday, smiles while her friends and co-volunteers sing to her during a birthday party Friday at Texas Health Presbyterian Hospital Denton. Walter has been a volunteer at the hospital’s front desk for many years, but her volunteer work goes back to World War II when she was a Gray Lady for the American Red Cross, rolling bandages. 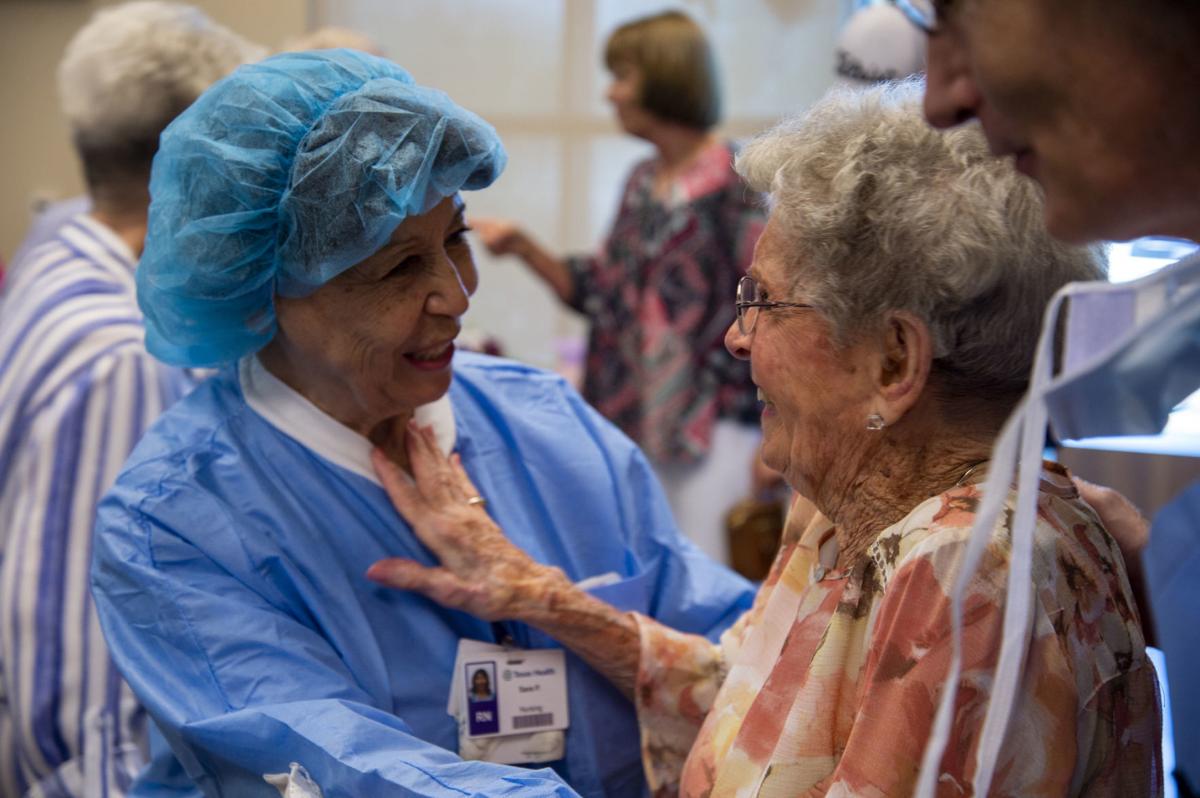 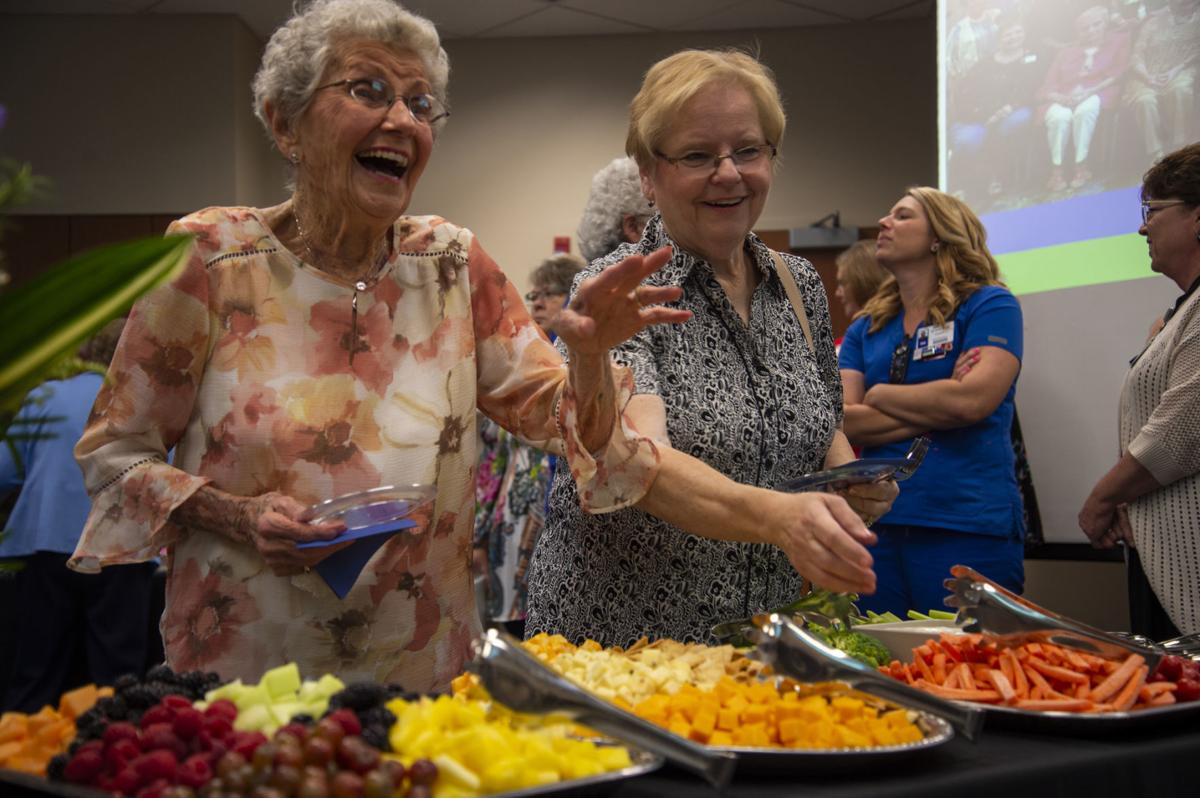 When Anna Mae Walter graduated from Roosevelt High School in Chicago during the Great Depression, going to college for nursing “wasn’t in the cards,” said her daughter Kathy Edman.

That did not stop her from giving back to the community.

More than eight decades later, Walter is celebrating her 100th birthday with a party Friday at Texas Health Presbyterian Hospital Denton, where she volunteers, with about 50 fellow volunteers, staffers and friends. She has more celebrations lined up for Saturday, her actual birthday.

“It’s been one happy thing after another,” Walter said about turning 100. “It’s been real exciting.”

Walter was born June 23, 1918, in Atlanta, Georgia. She recalled going to the movies for 5 cents and taking ballet lessons as a child.

Over the years, Walter worked as a bookkeeper, the co-owner of a toy store, and as a secretary in real estate and at a middle school, but she has spent much of her life in volunteer work.

Edman, 67, said Walter’s volunteer work in the medical field filled the gap of not going to school for nursing, which Walter said she would have changed if she could.

“I started in World War II,” Walter said. “I was a Gray Lady during the war.”

In 1941, Walter joined the American Red Cross’ Gray Lady Service, where she helped roll bandages. The Gray Lady Service was initially a non-medical care service, but its services extended to blood centers and disaster response assistance during the war.

Walter has volunteered in hospitals in Tennessee and Texas for almost 40 years. She moved to Denton in 2000 after the death of her husband. Edman, her husband and their son are Walter’s only family in Denton. Walter has two children, three grandchildren and two great-grandchildren.

Her volunteer work at Texas Health Presbyterian Hospital Denton over the past 18 years has earned her recognition from Barclay Berdan, CEO of the Texas Health Resources System, and the Dallas-Fort Worth Hospital Council in 2016, which Walter said was her fondest memory while volunteering in Denton.

Friends and volunteers said she has been an inspiration to them. Painter said it has been a “wonderful experience” working with Walter.

As a front-desk person, Painter said Walter has the right personality for the job. She said the person’s attitude should be happy, and they should always have a smile like Walter.

“[The front desk] is where she belongs,” Painter said.

At the front desk, Walter has worked alongside Nell Jones and Ed Kerr.

“She’s just an inspiration to me,” said Kerr, 81, who has served on the desk for about three years. “She’s a delightful person to be with.”

Jones, who has volunteered with Walter for about seven years, said she takes Walter home every day they work together.

“At her age, she is so sharp,” Jones said. “I love every minute I spend with her.”

Edman expects her mother could be volunteering for the next six to 12 months. She said her mother and Pam Milam, the head of volunteer services at the hospital, have come to an agreement that Walter can come in whenever she can, as long as she is able to.

One thing Walter wishes she could do is sew and crochet. Susan Shelly, a former volunteer, joked that they would sew together at the front desk, referencing a stereotype about their ages.

Walter said living each day to the fullest, being kind and generous, being of service to others and reading the Bible regularly are the most important things she has learned in 100 years.