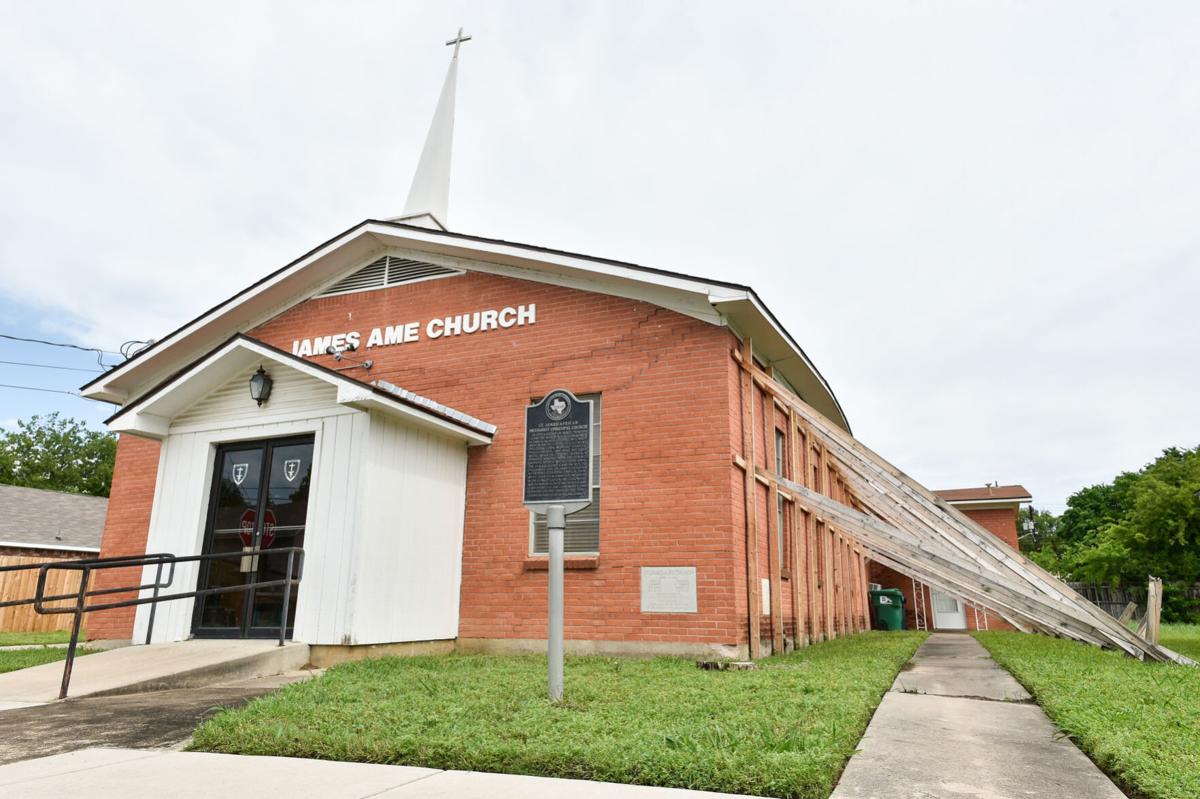 St. James AME Church is the oldest recorded Black church in Denton. The church’s building, built in 1962, is in deep trouble. The roof is failing, and engineers have installed temporary supports to keep the walls of the building from collapsing. 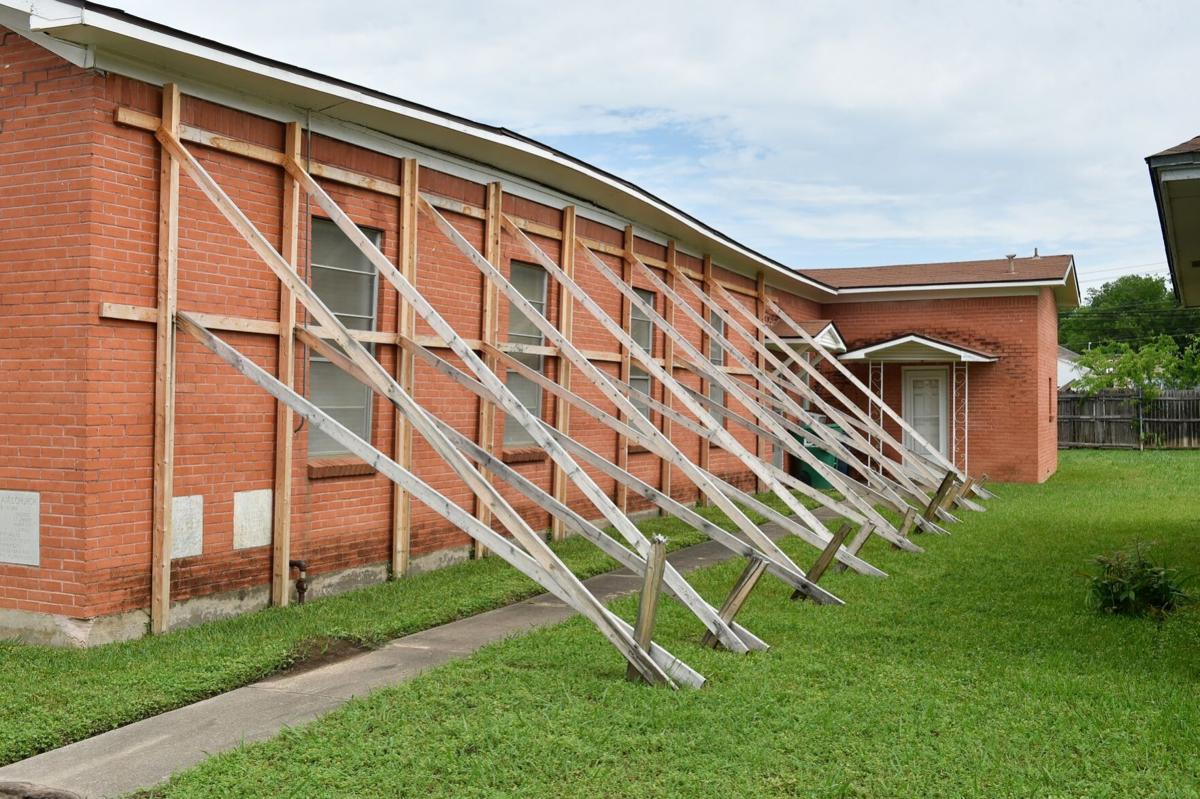 St. James AME Church’s roof is failing, and engineers have installed temporary supports to keep the walls of the building from collapsing. An exterior wall is close to collapsing because the roof framing is falling apart, according to fundraising campaign organizers.

St. James AME Church is the oldest recorded Black church in Denton. The church’s building, built in 1962, is in deep trouble. The roof is failing, and engineers have installed temporary supports to keep the walls of the building from collapsing.

St. James AME Church’s roof is failing, and engineers have installed temporary supports to keep the walls of the building from collapsing. An exterior wall is close to collapsing because the roof framing is falling apart, according to fundraising campaign organizers.

Generations of Black families in Denton have been baptized, married and sent home to glory at St. James AME Church in Denton.

In March, the congregation pulled the furniture out of its historical sanctuary and began worshipping, studying and praying in the fellowship hall.

The sagging roofline that elders and deacons saw from the street was a sign the city’s oldest Black church was in trouble.

“After moving ceiling tiles and opening Sheetrock, we discovered broken rafters, broken trusses,” said the Rev. Mason Rice Jr., the pastor at St. James. “The entire roof over the sanctuary has to be replaced. When we saw from the street that the roof was no longer just straight, we knew something was wrong.”

The church’s building, which sits at the corner of East Oak and Crawford streets, was built in 1962. It replaced a building from the 1920s, which was badly damaged by a storm in April 1962.

But like the answer to a prayer, Rice said Denton’s Christian community has rallied around St. James. First United Methodist Church launched a crowdfunding campaign to cover the $50,000 loan St. James got to begin construction.

“We thank them for the fellowship and friendship they have shown us,” Rice said. “We’re deeply thankful for Rev. Don Lee and the wonderful saints at First United Methodist — this is headed by brother Tommy Nations. They simply had to do something to help their brothers and sisters.”

Rice said the congregation has other partners in the project.

“There are partners we share fellowship and worship with; we meet once a month in a diversity group, where race issues, among others things, are discussed,” he said. Rice said he didn’t want to share names without the consent of the additional partners.

The sanctuary sits empty, with supports bracing the exterior walls on the east-facing side of the building. Rice said the interior walls also have visible supports to keep the weight distributed and the pressure off the broken rafters. A photograph of the exterior braces is posted on the GoFundMe campaign page.

The Denton congregation was organized by the Black freedmen and women of Quakertown in 1875.

Since its founding, the local church has been a civic anchor of Denton's Black and religious communities. The congregation has a long-standing history of partnership with Denton Methodists and Presbyterians, especially around the spiritual and practical work of racial reconciliation.

The congregation is one of the three oldest churches in Denton.

Don Lee, the senior pastor at First United Methodist, said he has served on groups with Rice over the years, and the congregations participated in a rebuilding project at St. James during Lent several years ago. The churches replaced flooring at St. James and updated the kitchen. The congregations also have worked together on other Lenten building projects, lending elbow grease and prayer to Denton’s nonprofit agencies that focus on housing.

“I’ve been at First United Methodist for nine years now, and our relationship with St. James probably stretches back before that,” Lee said. “We’ve had pulpit exchanges with them, and there are women here at our church who were part of [the Denton Women’s Interracial Fellowship, formed in the 1960s]. The friendship between our congregations isn’t new.”

Lee said that when the Methodists learned their brothers and sisters in Southeast Denton were working to make their worship space safe again, Nations, the chair of the First United Methodist Administrative Board, suggested they help raise money.

“St. James AME has a long history of resilience,” Lee said. “Some of the churches out there in Denton are congregations that really formed the core of our community. St. James is one of them. And my heart tells me that in this time of great racial divide, we need one another.”

As of Friday afternoon, nearly $4,000 had been collected for the $50,000 campaign. Lee said he would announce the campaign during First United Methodist’s sole in-person worship service on Sunday.

“I think there are good people in Denton who want to help out,” Lee said.

Rice said the congregation is waiting for a permit from the city’s development services department to begin construction.

“At this very moment, the congregation is dealing with it with a upbeat attitude,” Rice said. “Spirits continue to be at a high level. We have not missed one Sunday of worship experience nor one Wednesday night Bible study or Sunday school since we moved into our fellowship hall.

“There have certainly been some times that I’ve wanted to throw up my hands, but the brotherhood from our partners has made it possible for us to move forward with the construction.”