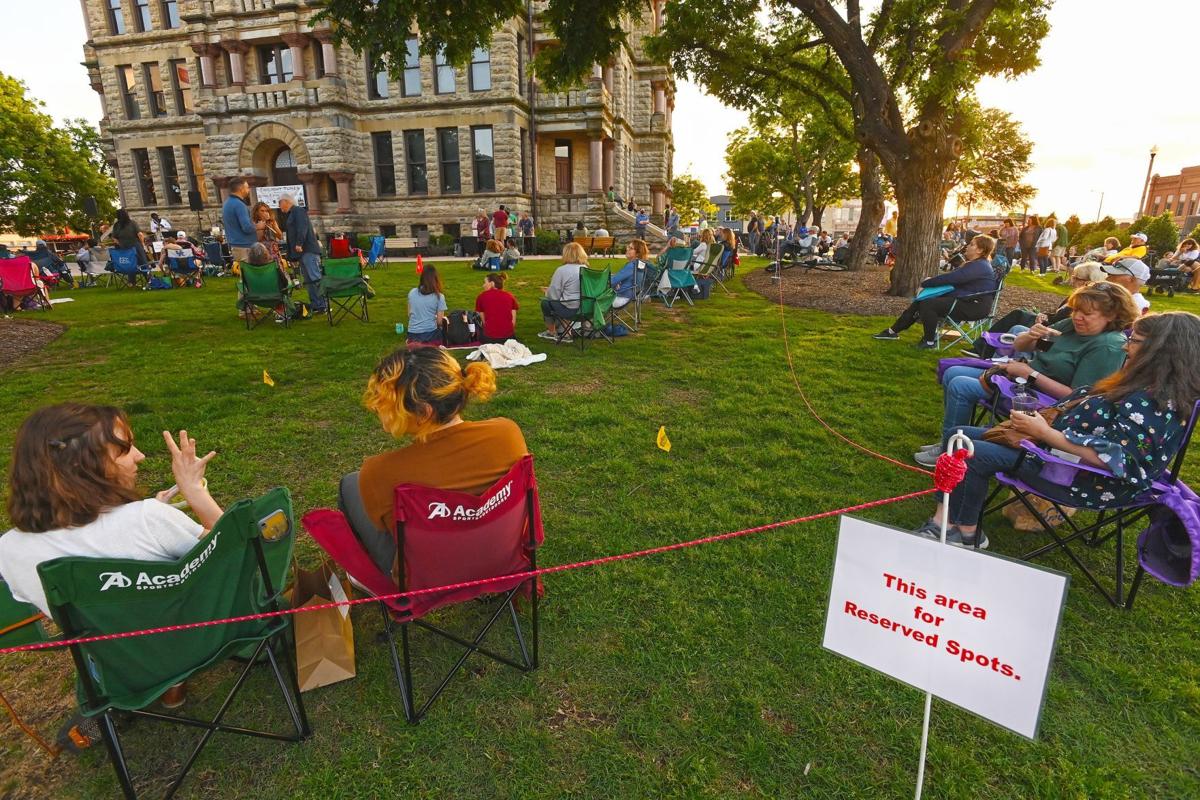 Denton Main Street has brought back Twilight Tunes, but with VIP and preferred seating so that people who want a socially distanced concert can have it. The concert series is free, but $15-$20 donations get attendees special seating that comes with space, as seen Thursday. 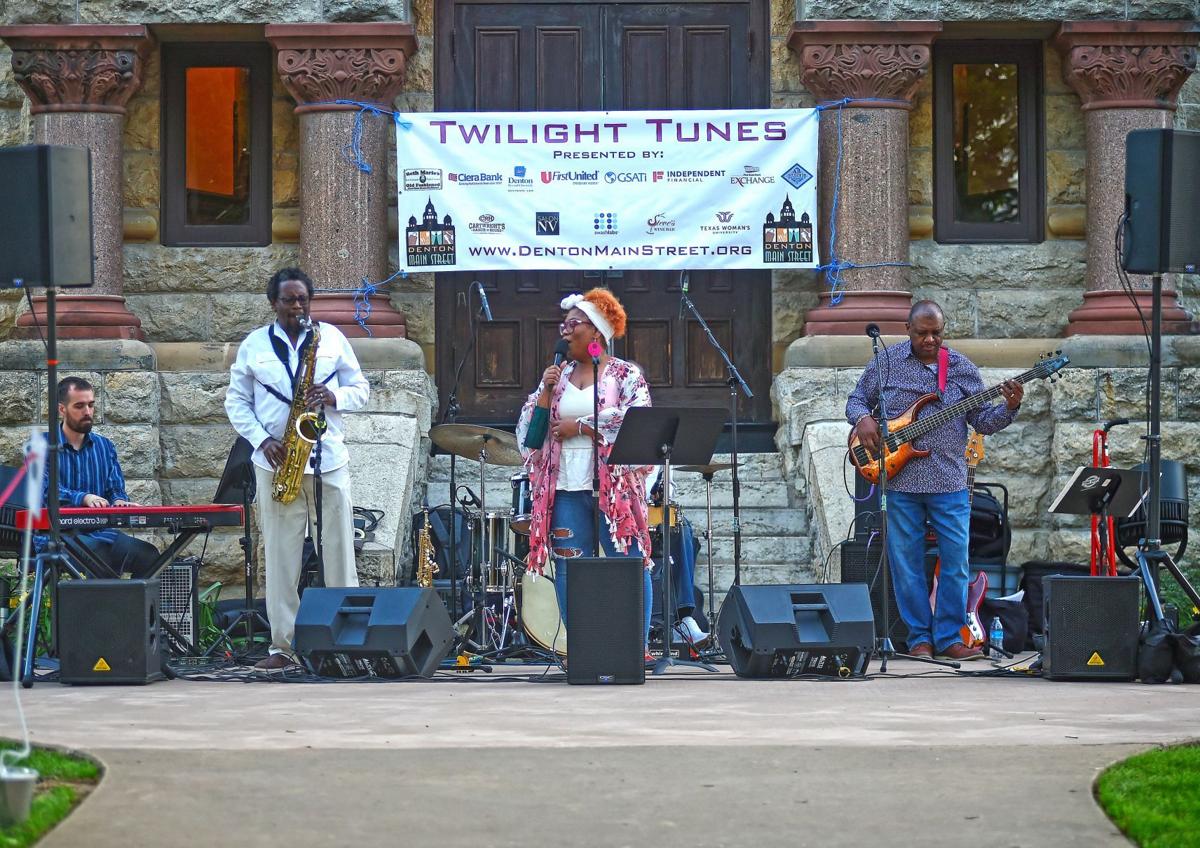 Denton Main Street has brought back Twilight Tunes — this week’s act was the band Fingerprints — but with VIP and preferred seating options available.

Denton Main Street has brought back Twilight Tunes, but with VIP and preferred seating so that people who want a socially distanced concert can have it. The concert series is free, but $15-$20 donations get attendees special seating that comes with space, as seen Thursday.

Denton Main Street has brought back Twilight Tunes — this week’s act was the band Fingerprints — but with VIP and preferred seating options available.

If you’ve ventured downtown on the past two Thursday nights, you might have been surprised by the welcome sight of people gathering on the lawn at the Courthouse on the Square.

Twilight Tunes is officially back. Bands, which have ties to Denton if they aren’t local, will return to the Square to perform all-ages shows featuring rock, R&B, jazz, blues, oldies and country.

There’s just one difference this year — VIP and preferred attendees can score seating with a donation of $15 or $20 to the Denton Main Street Association, which presents the free concert series. The concerts are from 6:30 to 8 p.m. every Thursday, weather permitting, in May and June, with another series in the fall. A $20 donation will reserve VIP seating, and $15 will offer preferred general admission seating.

“We’re having to get creative and bring the music back. It’s not too fancy,” said Christine Gossett, the executive director of the Denton Main Street Association. “We’re roping off some areas for VIP and preferred seating. It’s not even really a shape, because we have to go around the mulch on the trees. I guess you could say it’s a kidney shape, but it’s enough space for four adults with four lawn chairs.”

If you make a donation to reserve a spot, Gossett said, keep a lookout for the colored flags that mark off the seating. The remainder of the lawn will be open seating, Gossett said.

“If you don’t buy a ticket, that doesn’t mean you can’t come; it just means you don’t have that reserved spot,” Gossett said.

The VIP and preferred seating that hasn’t been claimed by donors by 7 p.m. will be released to make room for guests who attend.

The spaces will be available one week before each concert, Gossett said.

“We sold out Tuesday this week,” Gossett said before the season’s opening concert on May 6. “It’s better to plan if you want one of the spots. I wouldn’t wait until the day of the show. Just because you can’t get a spot doesn’t mean you can’t come. You can sit across the street, if you want to. People have done that for years.”

John Cartwright, the president of Denton Main Street, said the nonprofit brainstormed ways to get everyone back to Twilight Tunes — whether they’ve been drinking, dining out and shopping downtown since Texas lifted its mask mandate and reopened public and commercial spaces 100% in March, or if they’ve been waiting to get back into mixing it up. He’s the owner of Cartwright’s, a restaurant on the Square that serves up home-style comfort food.

“There are still a lot of folks who are uneasy about getting out in public,” Cartwright said. “We feel this is a good plan, to put out some parameters. We want to be sensitive to people who have some concerns and downright fears. We are taking steps to make sure people know there is a safe place to be here and enjoy downtown.”

Cartwright said Main Street will parse all the feedback it gets about Twilight Tunes and the preferred seating.

Cartwright said the idea grew out of the “bucket brigade” that Main Street dispatches to collect donations during the concerts.

“We had some reservations about getting in people’s faces like that, so we decided to offer it ahead of time and give people who donated some space,” he said.

Twilight Tunes concerts have long been a harbinger of summer and relaxing downtown, Cartwright said.

“As a businessman coming out of the COVID pandemic in a very healthy way, things are looking up,” he said. “The store is doing well. People are coming out. The cabin fever is in full pitch. l’ve been telling people that this is really the coming-out party for the downtown businesses that have been struggling the most.”

Twilight Tunes is 6:30 to 8 p.m. every weather-permitting Thursday on the Courthouse on the Square lawn. Bring lawn chairs and blankets and order snacks or dinner from one of the many businesses on the Square. Reserve seating at dentonmainstreet.org.