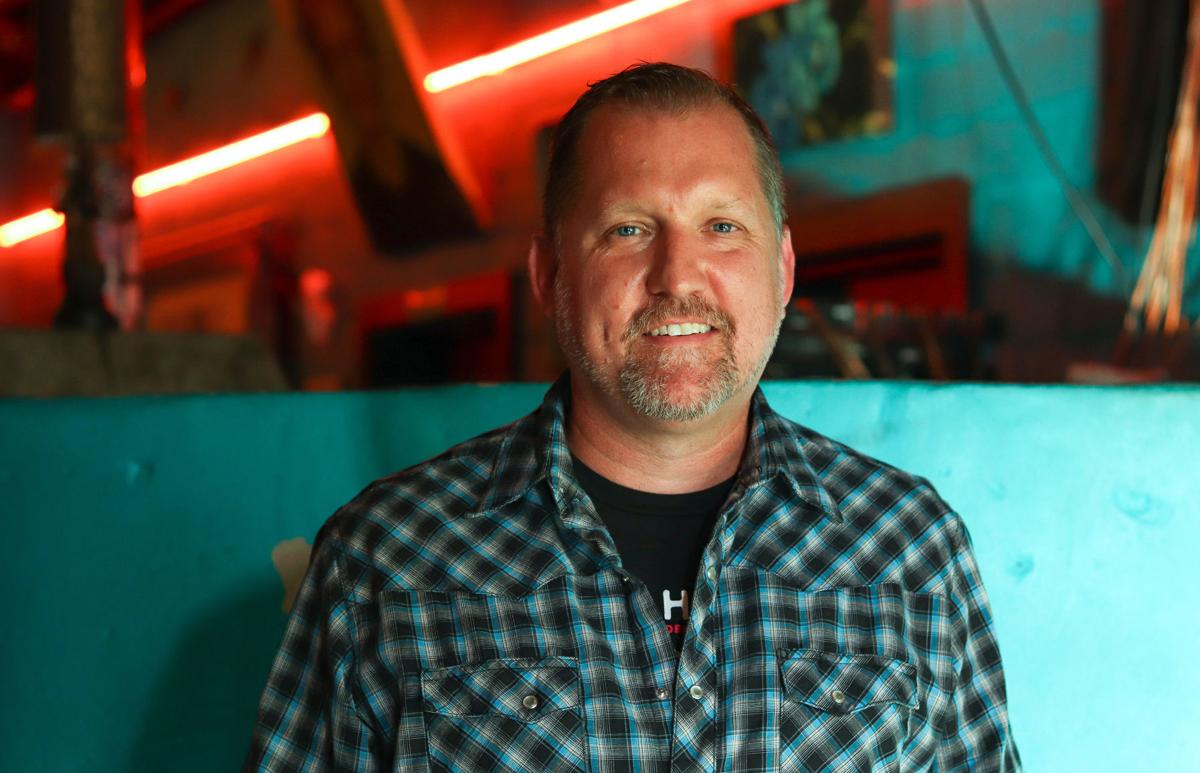 Known by his nickname “The Colonel,” Bruce Burns celebrated his 100th radio show on KUZU-FM (92.9) this Wednesday. 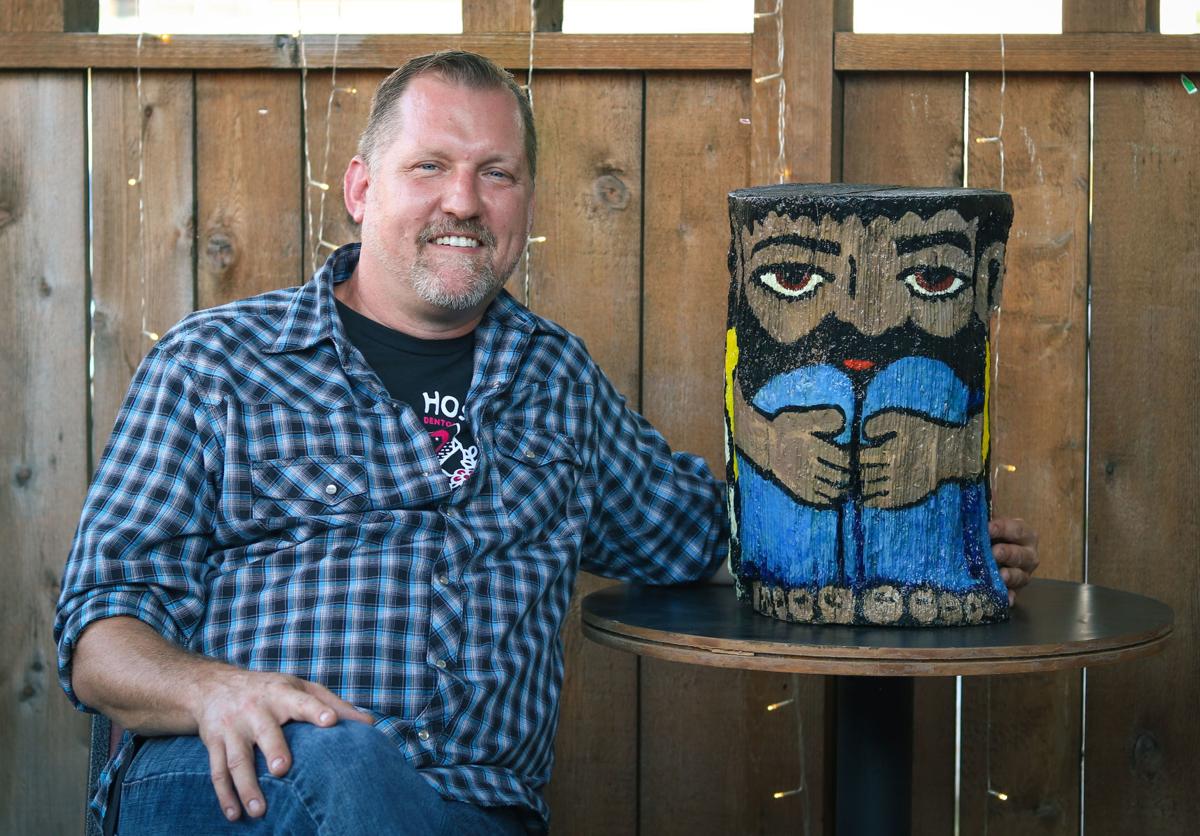 As a KUZU DJ and vice president of Denton Music and Arts Collaborative, Bruce Burns is a veteran volunteer. He created Myles Loggin — shown at the log’s home base, Dan’s Silverleaf — as a way to help raise funds for nonprofits.

Known by his nickname “The Colonel,” Bruce Burns celebrated his 100th radio show on KUZU-FM (92.9) this Wednesday.

As a KUZU DJ and vice president of Denton Music and Arts Collaborative, Bruce Burns is a veteran volunteer. He created Myles Loggin — shown at the log’s home base, Dan’s Silverleaf — as a way to help raise funds for nonprofits.

Every Wednesday at 7 p.m., a train’s horn blares.

Its wheels pick up speed, chugging along the tracks at an increasingly furious pace. The shrill sounds crescendo and peak before a warm baritone voice breaks through the wall of cacophonous noise:

Matthew Burns Jr. — who goes by his middle name, Bruce — is also known locally as “The Colonel.” With his dulcet tones and steady cadence, Burns has attracted a sizable following to his Wednesday night show on radio station KUZU-FM (92.9) — Denton’s low-power FM station, which just marked its 2-year anniversary.

This past week, Burns hit a milestone: his 100th episode on KUZU. To celebrate, his 12-year-old daughter, Elianna, who formerly hosted the KUZU show Little People’s Jukebox, took over the hour. She roasted her old man between old-school country tracks, and the duo discussed some of Burns’ favorite classic cuts.

“It was awesome,” Burns said. “Not only for me but just to know that KUZU is here to stay and it’s not just like a fly-by-night operation. ... It’s cool to be a part of it.”

As a KUZU DJ for its two years, Burns estimates he’s played upward of 2,000 honky-tonk songs. But his radio persona isn’t a new creation. Burns first unveiled his Honky-Tonk Hour in 2009 on 1670 AM, a low-power station also created by KUZU founder Peter Salisbury.

Incidentally, Burns said Salisbury is the guy who christened him “The Colonel.” One night in the early 2000s, Burns walked into Rubber Gloves Rehearsal Studios wearing an all-white, 1970s-style Johnny Carson suit and “roach killer” boots. Salisbury greeted him by shouting across the room: “It’s Colonel Burns!”

Frequently donning pearl-snap shirts and blue jeans, Colonel Burns today looks ever the good ol’ boy. But for him, it’s not just about appearances; Burns identifies as a true-blue honky-tonk music fan. He listened to it as a kid growing up in Bedford and reconnected with the sound later as a young adult.

Burns said that he loves playing the genre on air because everyone can relate to it, regardless of their background.

“The charm of old honky-tonk to me is it’s about real things,” he said. “The authenticity of that old sound transcends language, and it’s more emotional.”

Burns first demoed his Colonel persona when he was 16 after getting a job as a telemarketer for the Texas State Troopers Association. When he’d cold-call potential customers, he’d lower his pitch and thicken his drawl to convince them he was a middle-aged state trooper. And it worked — Burns said he made decent money from commissions.

As an adolescent, Burns was passionate about public service, nature and science. So when he discovered that the University of North Texas had an emergency administration and planning program, which combined the hard sciences with a human element, he immediately enrolled.

During school, Burns said he interned at a facility in the Panhandle that stored dismantled nuclear warheads. After he graduated in 1997, Burns worked for the Federal Emergency Management Agency during North Dakota’s Red River flood crisis to help uninsured homeowners get back on their feet.

Burns said he learned the importance of philanthropy at a young age from his mother, Melissa Prior. She raised him and his sister singlehandedly and later adopted his brother, who was homeless at the time.

“It became ingrained in me through being her child that whatever you do in life, you try to help other people,” Burns said. “I realized that it was what I was supposed to be doing.”

Now Burns is an operation center director for a company that provides emergency services for train derailments and cleanup work. Working in disaster management can be difficult, he said, but mainly it’s rewarding.

Even in his free time, Burns is hellbent on helping people. As vice president of the nonprofit Denton Music and Arts Collaborative, he assists in providing local musicians and artists with health care.

And last April, Burns made the news in an unconventional way after he introduced the town to Myles Loggin, a log painted to look like a crouching bearded man.

Burns rescued the log after it fell off the back of a truck and onto busy Bell Avenue. But instead of turning the stump into firewood, he decided to get creative.

First, he commissioned local artist Melanie Little Gomez Smith to paint Myles Loggin’s face. And after creating a Facebook page for the anthropomorphized trunk, Burns turned it loose on the town.

Now, curious Denton residents can pick up Myles Loggin from his “home base” at Dan’s Silverleaf and carry him to a local business or nonprofit. From there, they can publicize the escapade on social media to raise funds for a charity of their choosing.

Between a demanding job in the railroad industry and numerous volunteer efforts, Burns said he’s constantly working to serve the local community. Whether it’s raising money for a worthy cause or spinning 45s, he hopes to make a lasting impact on Denton.

As far as Burns is concerned, he’s just getting started.