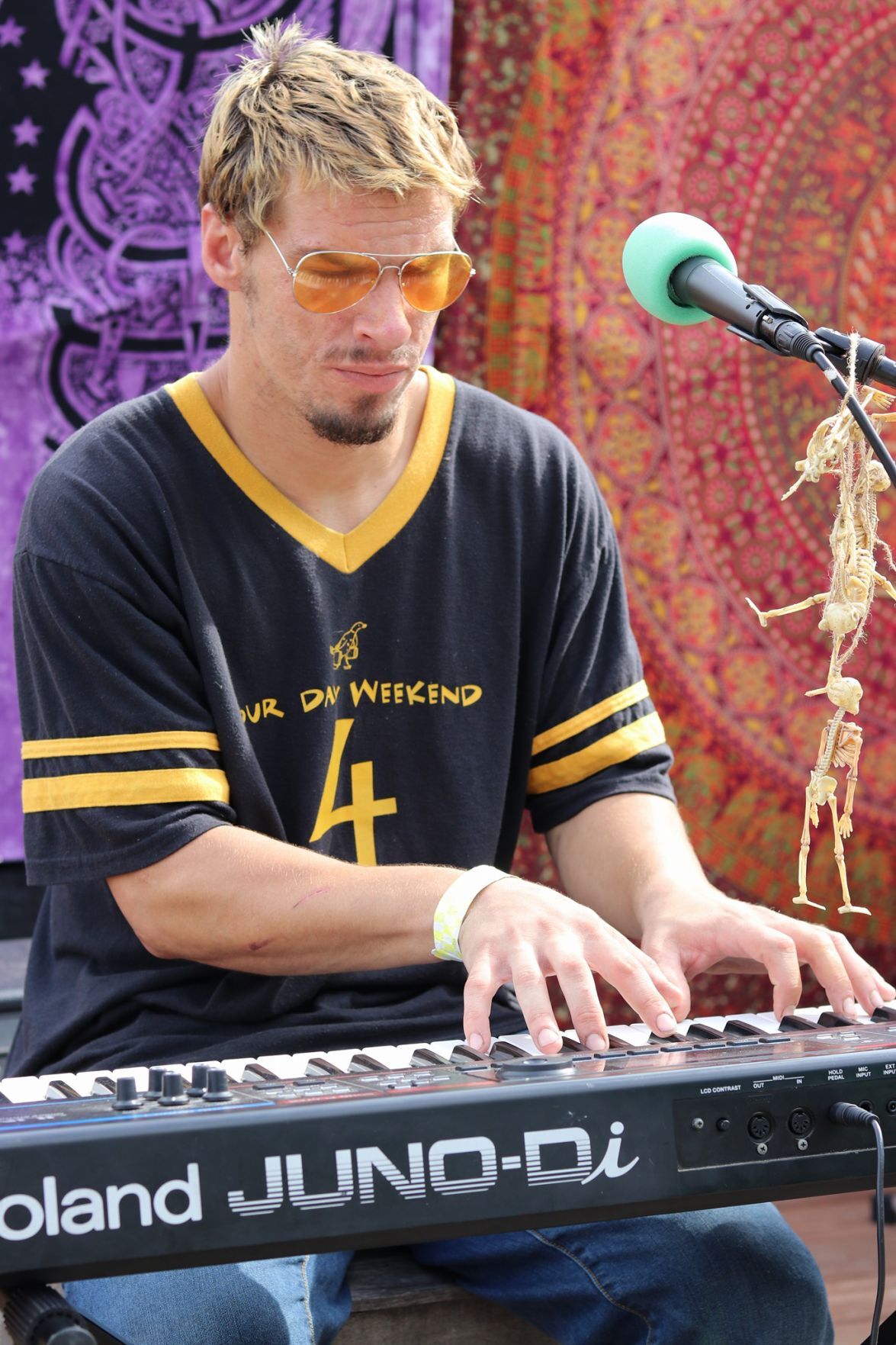 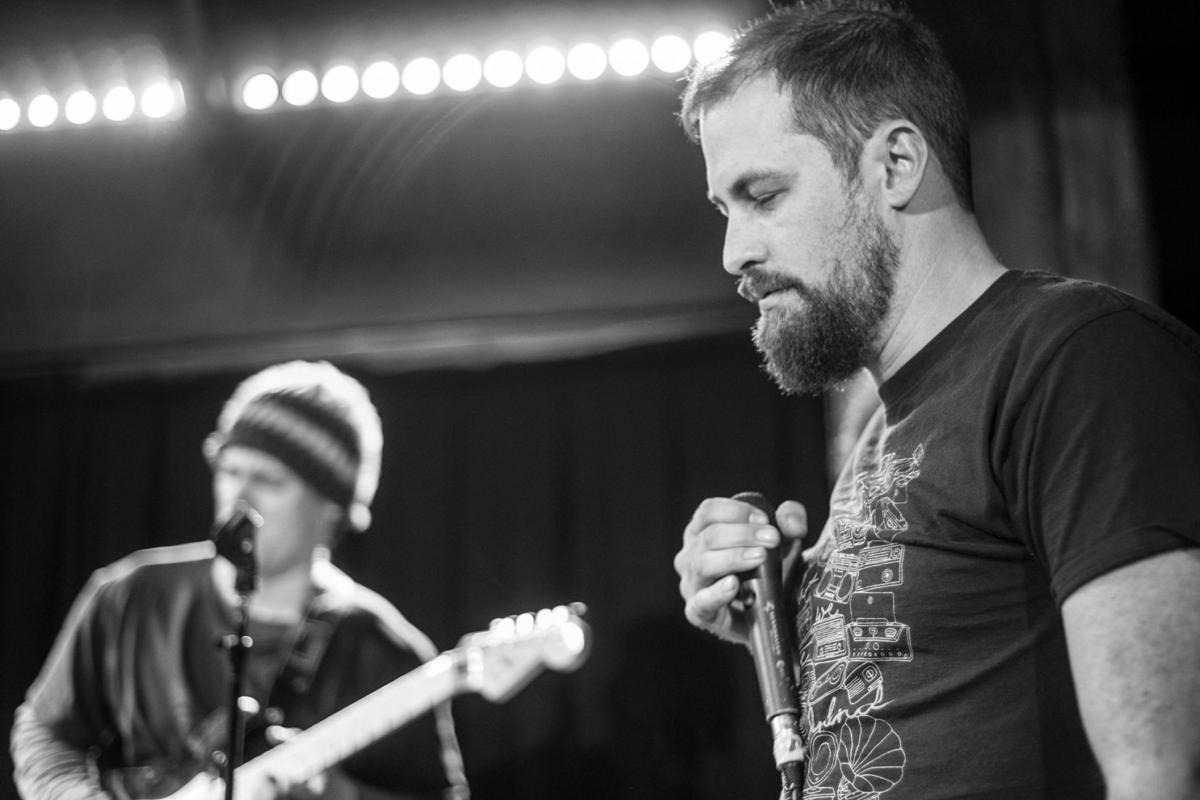 Daniel Forrester (left) made a record with local hip-hop artists, including emcee Muenster (right, a.k.a. Ian Harrison), between 2016-2018. His music project was disrupted by a heroin addiction. Forrester, who’s in recovery now, is ready to release the untitled EP, and is making another jazz record. 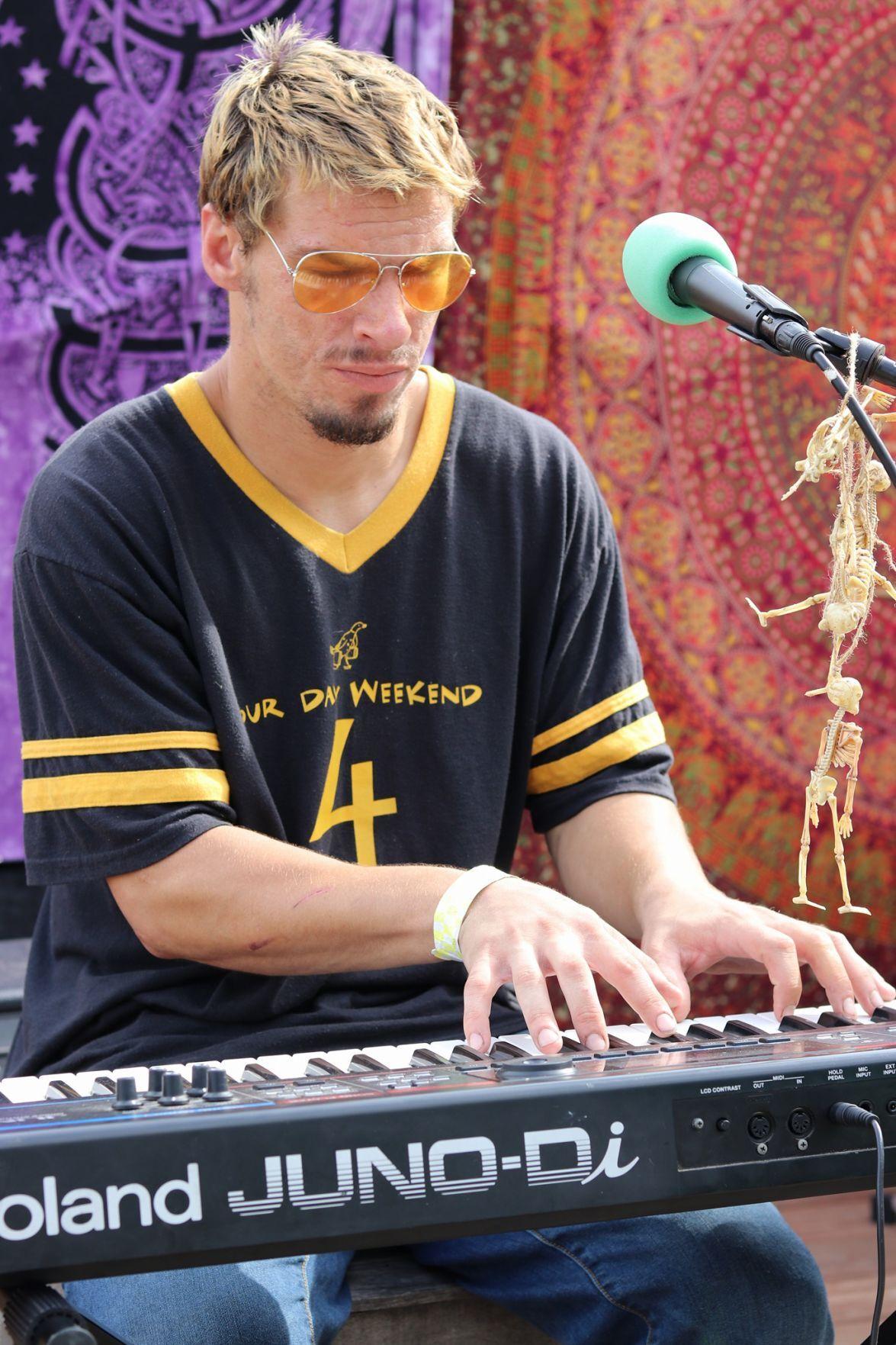 Daniel Forrester (left) made a record with local hip-hop artists, including emcee Muenster (right, a.k.a. Ian Harrison), between 2016-2018. His music project was disrupted by a heroin addiction. Forrester, who’s in recovery now, is ready to release the untitled EP, and is making another jazz record.

Daniel Forrester, the man behind the music project Wax Logic, kept dancing with the devil and flirting with death.

For years, he was addicted to heroin. Taking flight and getting too close to the sun. The habit nearly took his life and his right hand.

Today, the 34-year-old is sober and healing.

The antidote? His latest project, an untitled EP that packs jazz, groove and the best of Denton’s hip-hop into five tracks.

Between gentle percussion, socially conscious rap (think Arrested Development and Maxwell) with a yen for chattering trumpet runs and guitar licks that get gravelly and buzzy, melodies bop between head and heart.

Wax Logic sounds ready to grow up, live a little and love a lot.

Forrester won’t call himself a straight-up jazz musician. But he got close to being one.

“I turned down a loan to go to UNT,” Forrester said. “I’ve never regretted it.”

Forrester moved to Aubrey in 2004, and said he realized right away that Denton was a special place for a musician. He’d started playing drums at age 6 and eventually taught himself to play guitar and piano. He grew up in East Texas, learning to compose music through recording it.

Forrester got his first gig playing lead guitar in a Texas country band.

“We needed a bass player,” he said, “so I called [Denton double bassist] Drew Phelps and asked him if his son Nathan was available for a gig.”

He’d seen Nathan Phelps play upright bass in Le Not So Hot Klub du Denton, a Django Reinhardt cover band founded by clarinetist Andy Cooper that counted Grammy-winner Jeffrey Barnes and powerhouse guitarist Thad Bonduris among its members. The band would pack Banter, a downtown Denton club that, in its day, was akin to Stratford-upon-Avon’s Dirty Duck. It was a preferred after-hours spot for actors fresh off the Campus Theatre stage, musicians in search of a place to jam and waves of visual artists. (The space is now 940’s Kitchen & Cocktails.) It’s easy to see how Forrester would get drawn in for pints and sultry sounds.

It didn’t take too long for Phelps and Forrester to reevaluate the Texas country project.

“Me and Nathan decided country music was not as fun or stimulating as other stuff, so I urged him to play in a group I started called $9 Word,” Forrester said.

That project was Forrester’s entrance into the Denton music scene in 2007. Forrester said that Denton was cooking, with acts like Denton blues legend Pops Carter, Sol Kitchen, Snarky Puppy and UNT horn players from the One O’clock Lab band playing in a lively landscape of clubs: Hailey’s, Abbey Underground, the Fry Street area, Delta Lodge.

“This is how I met Pudge Brewer, and Sylvester Onyejiaka, and got bands like Sol Kitchen to allow me to sit in at Riprocks, provided I could sneak in, so I would hop the fence in the back and sneak in and play,” Forrester said. “I learned so much from these musicians about music and what being a musician means. It was exhilarating, and by the time I was 18, I was in it 100 percent. I decided that I would do this for the rest of my life.”

But at 18, he had a premonition that there might be some interruptions in his music-making.

“Well, I also got arrested for weed when I was 18,” he said, recalling his first round of probation.

Probation didn’t go well because, as Forrester said, he “stubbornly would not honor the probation requirements by actually quitting smoking pot.”

Forrester went to jail four times over that period, and eventually had his probation revoked and found himself cooling his heels in Denton County Jail.

When he got out, Forrester said he moved to Austin partly to get away from being exposed to harder drugs locally. He started studying journalism at Austin Community College until a Denton band, Congratulations, asked him to join them on a tour to sub in for the bassist.

“So I dropped out of ACC and moved back to Denton, learned their music in two weeks. I was already a fan of them, and they were all mentors of mine,” Forrester said. “This changed my life.”

When he got back to Denton back in 2009, Forrester stepped to the edge of the kind of career that involves major record labels and producers who have the Midas touch, were Midas’ fingers infused with platinum.

Forrester said he “lent a song” he wrote to renowned bassist Bootsy Collins, known for his work with James Brown and Parliament-Funkadelic. “I sent him some music, and a few weeks later, he sent me an email back wanting to buy the session from me to release on a record called Tha Funk Capital of the World that he made in 2010.”

Collins scrapped that session in favor of more radio-friendly material, but Forrester still has the emails from Collins, who also thought about using the session files that are now “Freedom” on the new EP. The transaction was a confirmation that Forrester has some chops.

But 2009 is also the year Forrester tried heroin, a decision that plunged him into the worst days of his life. Heroin poisoned a romance and chewed up anything good in his life. He taught music in Southlake and played in a Christian band to make enough money to finance his drug habit.

“I did some pretty awful things,” he said. “Never intentionally mean things, but addiction just does that. It robs you of empathy and connection. What made those years so awful was the inability to get and stay clean, well beyond the point of realizing that I had a problem, and actively trying to fix it. It was very baffling. My quality of life got very bad.”

Heroin was everywhere, it seemed, and Forrester had bouts of homelessness. Things seemed brighter in 2015, when he moved back to Austin and started playing again. He toured and played blues guitar on Sixth Street “like Stevie Ray Vaughan.”

He came back to Denton in 2016 and pulled together a group of about 12 local musicians to record a project that blended jazz with hip-hop. Forrester deplores Top 40 hip-hop. (“Musically it’s trash and doesn’t inspire people to pick up an instrument,” he said. “And the message isn’t good. Crime. Egoism. The treatment of women in mainstream hip-hop is gross.”) In the project, he got local heavy-hitters to create five tracks that consider the world from street level.

Ian Harrison, also known as hip-hop emcee Muenster, said Forrester’s project might have been on the shelf for a while, but still remembers the shows and studio fondly.

“I approach all of my verses as jazz solos, as a student of the school of jazz,” Harrison said.

Like a lot of emcees, Harrison improvises during shows. But he approaches writing from a jazz perspective.

“When I write a verse, it’s like I hear the sounds or syncopations before the words,” he said. “Live, I end up freestyling almost every one, and that is for sure like a solo or a ‘scat.’”

On tracks like “Delaware,” Harrison and Ritchy Flores, known as Ritchy Flo, reflect on the hip-hop game but without artifice or posturing. They rap about their insecurities or the banality of life as working stiffs and grown men. Life has its obligations, and sometimes, the heroic journey is built, brick by brick, in just making an honest effort. “Freedom” is a cool groove that champions the art of chilling out, with Dallas singer Somogyi laying velvety vocals between local emcees’ verses.

The tracks are generous, with a few clocking over six minutes, even nine minutes. But Forrester finds a pocket for the players to groove in, and the songs don’t wear out their welcome.

“I was cool with them using their material as an instrument. I didn’t tell them what to do,” Forrester said of his featured artists. “I gave them some guidelines, but this wasn’t about controlling anyone. It was really about making something together.”

Before he could release the EP officially, Forrester relapsed, and ended up tasting the sand and dust of his rock-bottom.

“Most people that you talk to will say one, or both, of these things: I am an incredibly talented musician, and I was an incredibly addicted addict,” Forrester said. “And I don’t even pretend to glamorize it, or think it is OK. Now it is simply something that I acknowledge and manage and work actively to avoid because I know precisely how much I have to lose if I use again, which is everything.”

Forrester got into a long-term rehabilitation treatment with Cenikor, a nonprofit that was embroiled in controversy because investigations found its business model — having addicts work to cover the costs of rehab — violated federal law.

“I did the work — I gave up and did it and had faith that I could do it and stick with it, because it was just not possible to see any other circumstance that wouldn’t result in me going to prison, dying, or losing my mind,” Forrester said. “It was the hardest thing I have ever been through. The program was so tough and intense that 14 months in, the state shut it down and converted into a sober living facility.”

But Forrester said change had taken root. He’s committed to his recovery, and knows that relapse is a persistent threat.

These days, he’s working for an air conditioning company, and working on a new project that will probably be instrumental. For Forrester, Wax Logic will be a mode of healing and recovery. He’s experienced the disruption and disconnection of addiction. Music puts him among people, a proposition he finds to be worth the risk.

“The collaboration is the thing, here,” he said. “I could sit in a room by myself and make a record and it wouldn’t be gratifying. I want to make something with other people, people I respect and have love for. I’m not doing a lot of solos on the next project. You can only say so much on your own. But with four or five people, you can say more. And I want to hear all that. That’s what I’m living for now.”