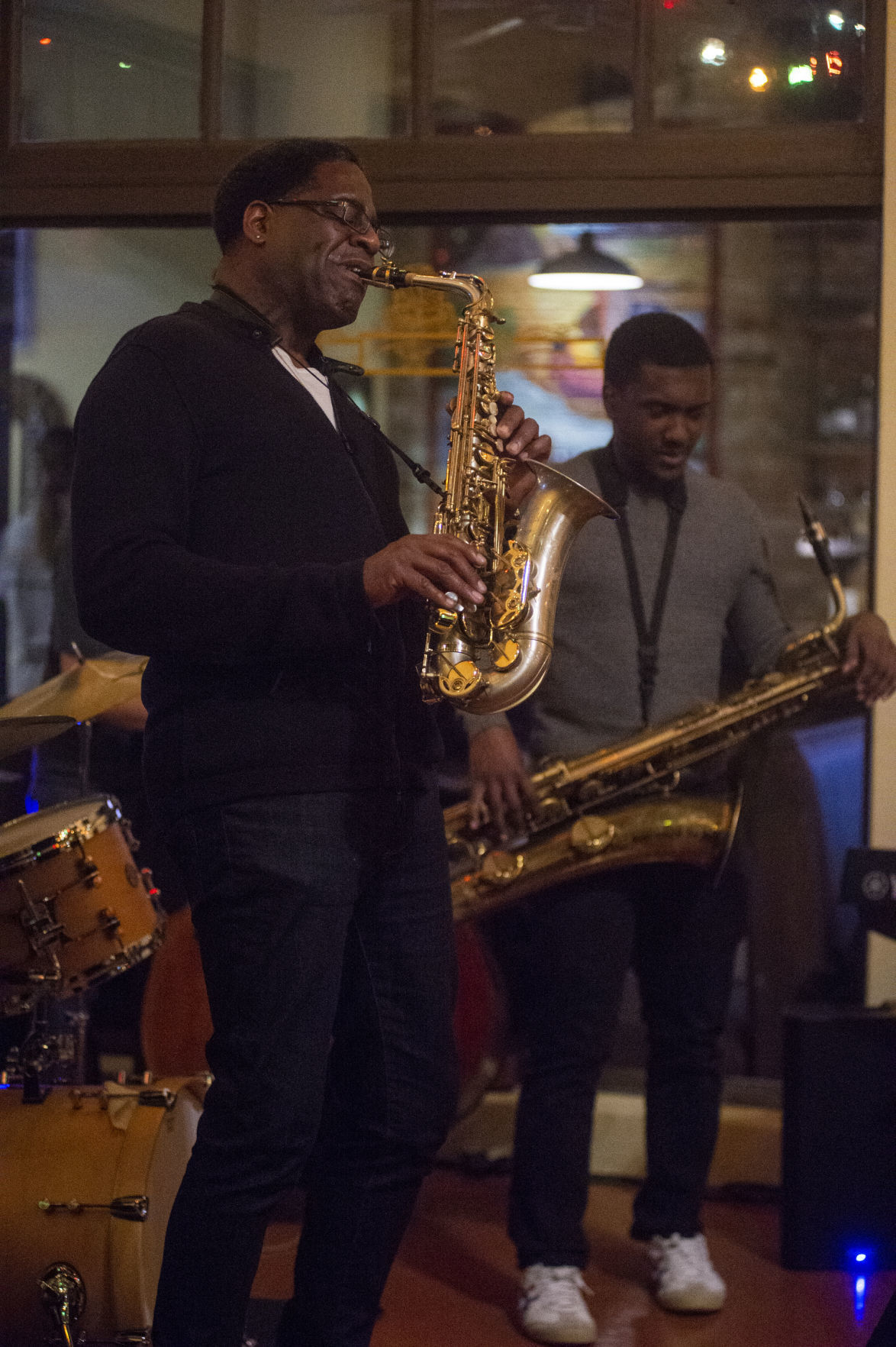 Saxophonist Brad Leali, left, has developed a popular act over the years called Gospel Meets Jazz, which showcases the shared roots of both forms. 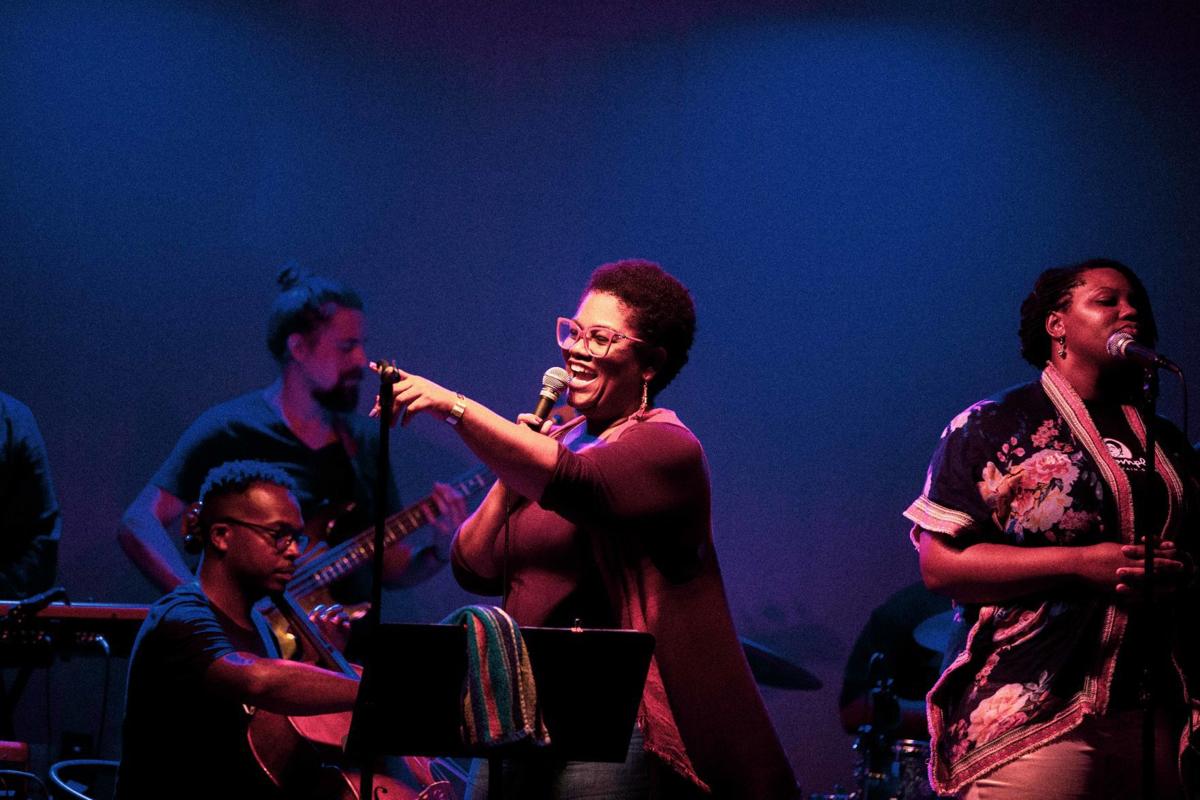 Denton artist Katina Butler, shown during a performance, is a part of Gospel Meets Jazz, an act led by saxophonist Brad Leali. 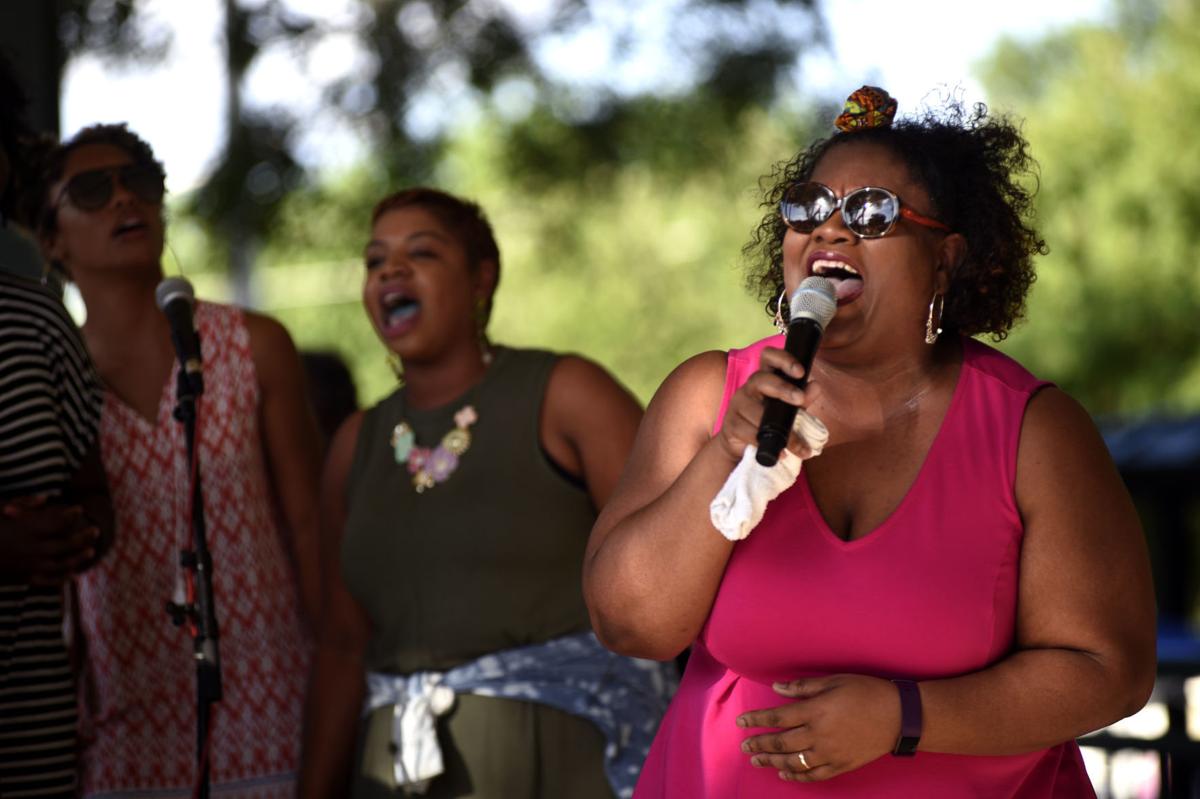 Katina Butler, shown with the Federation Choir during a Juneteenth festival, performs with Gospel Meets Jazz with Brad Leali. In the act, Butler and Leali explore the common roots of gospel and jazz music.

Saxophonist Brad Leali, left, has developed a popular act over the years called Gospel Meets Jazz, which showcases the shared roots of both forms.

Denton artist Katina Butler, shown during a performance, is a part of Gospel Meets Jazz, an act led by saxophonist Brad Leali.

Katina Butler, shown with the Federation Choir during a Juneteenth festival, performs with Gospel Meets Jazz with Brad Leali. In the act, Butler and Leali explore the common roots of gospel and jazz music.

The Denton Arts & Jazz Festival won’t happen this year, but one local act slated to play the main stage plans to spread some love once the county’s shelter-in-place order is lifted.

Jazz saxophonist Brad Leali, a professor at the University of North Texas, has created a musical group called Gospel Meets Jazz, which was slated to perform on the now-canceled jazz fest’s main stage. His colleague Katina Butler often sings with the group. The local artist will be the host of Denton Radio’s live music podcast Pops and ‘Nem, slated to begin April 16.

Their discussion of the relationship of gospel music and jazz led to some eye-opening revelations.

“Jazz is a derivative of gospel music,” Leali said. “It includes the spirituality and is inclusive of everyone. The message is love! With today’s jazz, it is easy to forget the history and the message of what we are trying to evoke.”

Gospel Meets Jazz is composed of musicians from UNT and the community. The choir is the core choir from the Morse Street Baptist Church under the direction of Bobby Hicks.

“Gospel music itself has evolved,” she said. “When Africans were enslaved and brought to this country, they brought their art and culture with them.

“The Bible talks about someone harming your body versus your soul. The African American experience embodies this. We endured oppression to our bodies, hearts and minds, but our souls continued to flourish, and created unmatched music, culture and art. It’s just a part of our fabric and who we are. Gospel music is birthed from pain and oppression and blossomed from there. It was a communal exchange that took place not just in church gatherings, but at home, on the front porch and at work.”

Butler said slavery was an unhappy inheritance that led to its survivors holding fast to their art.

“Often in the music was coded language — ways to encourage each other, to conspire in figuring out a way to escape. It’s amazing when you look at lots of Negro spirituals, how with just their voices they could plan, they could speak to one another — by singing words the slave masters could hear but not hear.”

When asked about gospel music today, Butler replied: “When I say gospel, I’m thinking about the black church. There’s just a way our folks sing songs. It’s amazing how they sing: the intonations, the vocal lines and how everyone would move at the exact same time. This is not a choir — the choir is up there. This is a church full of people. How does the 90-year-old woman, and my mom who was in her 30s at the time, know to do the exact same thing, move and take the same breaths?

“The nuance is amazing. It just sounds like one voice and so there is a depth of feeling. It’s otherworldly when you sit in a church where the voices are dominating. The movement, the emphasis on certain words, on certain syllables, and the way the voice will trail off at a certain point of the line. That’s not written anywhere. It’s like folklore. It’s musical folklore. That’s what I would call it.”

Moving on to the topic of modern jazz, Leali laments that it has lost melody.

“I think that has certainly happened in jazz with the loss of melody,” Leali said. “Of the things that contribute to that, one is looking at the music. When you are looking at the music, you’re not using your ears — you’re using your eyes and your brain. But you’re not using your ears. You have to hear melody. It is easy to look at something and make it significant. I could play something and my musician buddies would say, ‘Oh man — that’s great!’ And we could just try to please each other and not even think about our audience. ‘Well, I just want to please myself.’ I think that’s what’s happening and that’s what contributes to the loss of melody.”

Leali said some jazz musicians encourage one another to “forget about the audience.”

“I don’t say there is anything wrong with that,” he said. “I say if that’s what you want to do that’s your musical choice, your artistic choice. However, I think more musicians are doing that and it’s becoming the norm. It’s like, ‘Oh man, that’s what I want to do.’ I want to become as technically proficient as possible, as harmonically proficient as possible, but I don’t want to delve into the melodicism of everything.”

When he was young, Leali would slip into jazz clubs and those musicians taught him what was important. Melody was one of the aspects they stressed.

“We don’t admire our elder generation and respect them as much as we did in the past,” Leali said. “Today’s young musicians are getting all their justification from their peers. High-fiving and exclaiming, ‘You’re killing it.’ But how much do their peers know?”

“Church musicians don’t go to school to learn music,” he said. “Their school is in their heart and their faith. They approach music from another place entirely.”

“It’s communal,” she said. “When you are playing in the black church, it can’t just be about you. You have to respect your elders. You have to engage in a way that honors everyone and brings everyone in, because it’s congregational. You’re not just up there, ‘Oh, look at me’. Everyone has to be involved and engaged. You’re not just playing for you, you are serving just like the usher would serve, just like the greeter, or just like the preacher. Your function is to serve the whole body.”

On the topic of respect for elders, Butler describes how it worked in the black church.

“There was a process back in the day,” she said. “You did have to be put in check by an elder musician or singer. You were told that you sucked. ‘That sounds like garbage. I don’t know what you’re doing!’ There was a beauty in their process because they refined you. You built your craft off the networking of submitting to the authority of those who came before you. You paid homage to them and listened to what they had to say.”

“Now, everyone is an artist,” Butler said. “Everyone has a studio in their bedroom, an album, a CD, a book. They can do anything. The true artist with the craft of music is lost in the shuffle.”

“People want celebrity more than they want artistry,” she said. “If you notice people who are in music or art for the craft, they’re not the one’s trying to be center stage. They’re minding their business, doing what they love, and teaching other people. There’s just something that grounds you when you’re looking at music as a craft rather than ‘I want to be the next great this person or that person.’”