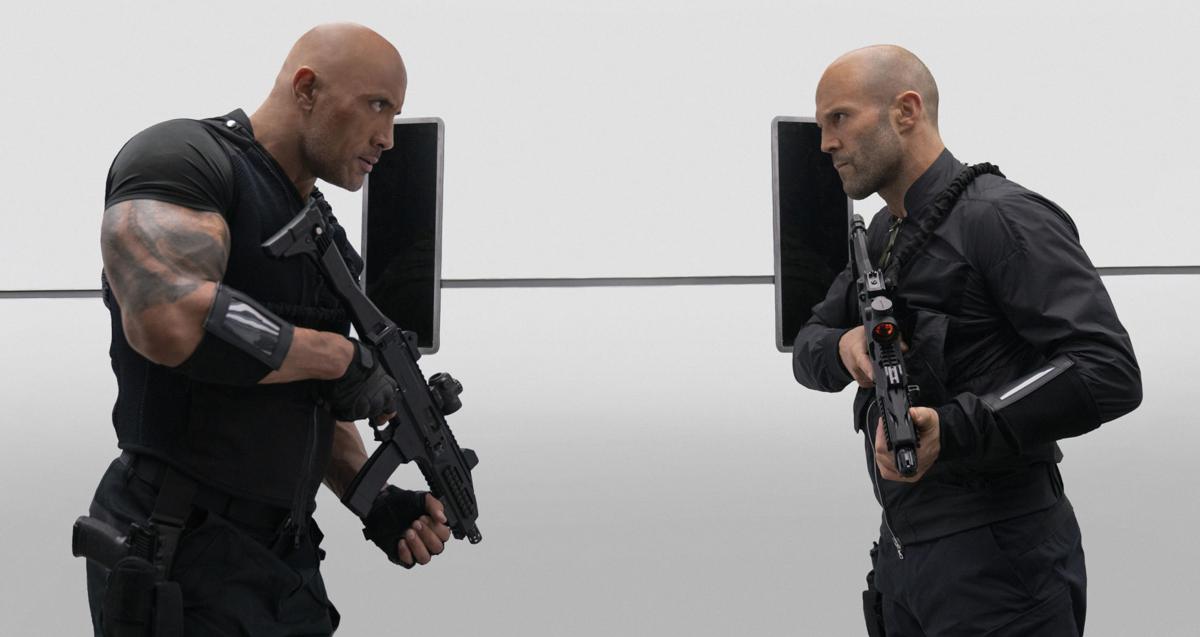 After the Fast & Furious movies spun their wheels, it was time for an overhaul. Fast Five reinvented the franchise, capitalized on heists and pulled off missions that we thought only Ethan Hunt was capable of. It also tagged Dwayne Johnson to step into the testosterone-fueled ring, a move that accelerated his action-movie career and made him one of the biggest, most charismatic stars on the planet.

Since then, the set pieces have doubled in size and reality has slipped further into oblivion. It’s only a matter of time until we’re in space or traveling back to the age of dinosaurs. As far as dumb blockbusters go, these movies rule the throne. They have the spectacle and brains of Michael Bay-directed action and the fun global chases of James Bond films.

The first Fast & Furious spin-off, Hobbs & Shaw, is a glorious beefcake showdown that presses the button on stupidity and revs the entertainment engine to mad levels. It takes two of the most effortlessly delightful characters from the series and unleashes them, so they can beat goons with inanimate objects and crack wise.

In this go-round, lawman Luke Hobbs (Johnson) and outcast Deckard Shaw (Jason Statham) are contacted by their respective agencies and are tasked with saving the world again. Why Vin Diesel and Co. are missing out on the fun makes about as much sense as any solo Marvel superhero outing. You would think the Avengers would be present for every world threat, but I guess everyone deserves to kick back and crack open a Corona. After this movie, however, Diesel and his Avengers can take all the time they need because Hobbs and Shaw are cruising on premium synthetic.

The big bad here is a cyber-genetically enhanced villain named Brixton (Idris Elba, who also shares a song with Cypress Hill in the soundtrack). This dude is RoboCop with a chip malfunction — just add the strength of Superman. He even calls himself “Black Superman.” He certainly puts Hobbs and Shaw to the test as the duo anticipates Brixton’s defeat will be a cakewalk — considering this isn’t their first rodeo. But Brixton is smart and has Transformers-like tech that allows him to weasel around and throw a few Hulk punches.

Shaw’s younger sister, Hattie (Vanessa Kirby of Mission: Impossible — Fallout), is caught in the mix, too. At the film’s beginning, she attempts to save the world, but circumstances lead her to inject herself with a manufactured virus that has the power to wipe out humanity. She’s on the run because British intelligence thinks she sabotaged the mission and should be held accountable for her squad’s demise. While she hides in the shadows, Hobbs and Shaw must find her before Brixton extracts the virus and follows through with his world-ending promise.

Right out of the gate, director David Leitch (Deadpool 2, Atomic Blonde) puts his unique signature on this property. It still feels like a proper extension of the Fast & Furious franchise, but it has a slicker aesthetic and more authentic fight sequences. It should come as no surprise as the stuntman-turned-director co-developed John Wick and has spiced up his following films with hand-to-hand combat that looks like the actors are getting bruised up.

Although the editing is more chopped-up than usual, the action still has a visceral appeal that makes this one of the most satisfying entries. I could watch Statham smash in skulls with champagne bottles and Johnson toss baddies through glass windows all day. So, if you’re craving thunderous action, Hobbs & Shaw has got you covered. I mean, when your movie concludes with a Samoan war with wooden clubs and multiple cars hog-tying a helicopter, you know you’re in for a treat.

Additionally, the comedy is another top ingredient made for mass consumption. All the quick comebacks and playground insults give Hobbs & Shaw its tasty flavor. It’s always a joy to watch an unlikely pair give each other grief. We got a taste of that in The Fate of the Furious, but here the chiseled baldies are not sharing the screen with as many competing alphas. They completely flex their comedic muscles, and don’t need any spray-on to give it a glow. The gags are through the roof, whether it’s Shaw giving Hobbs to-die-for nicknames, or Hobbs tossing the ball back in his court by commenting on Shaw’s small stature. Not every joke hits the mark, but when it does, it sucks the stale air out of the room.

In terms of negativity, it’s a dumb action movie. You can’t expect a high score when cars are doing impossible flips and the laws of physics are having a day off. If you recall that ridiculous moment from Fast & Furious 6, when Diesel catches Michelle Rodriguez midair during a high-speed pursuit, you have many more things coming. You’ll be muttering, “Yeah, right,” more times than Diesel growls “family” in these movies.

At a whopping 136 minutes, Hobbs & Shaw also runs a little too long. You will arrive at what you believe is the concluding battle, but then Billy Mays figuratively pops up to say, “But wait ... there’s more!” It’s a bit clunky, but each set piece has its value. While they don’t all flow organically, you won’t stop eating the popcorn. It’s never dull, but you can feel the filmmakers stretching the narrative to squeeze in all its scattered ideas.

Hobbs & Shaw is one of the better features in this franchise’s high-octane fuel tank. Every once in a while, the movie loses momentum, but the cast members (especially Kirby, who outperforms Black Widow with her impressive tackles and happy trigger fingers) bring their A-game. It’s pure lunacy with all the cheese and zingers to put a smile on your face.