Dani (Florence Pugh) finds her trip to a Swedish fest is no vacation in “Midsommar.” 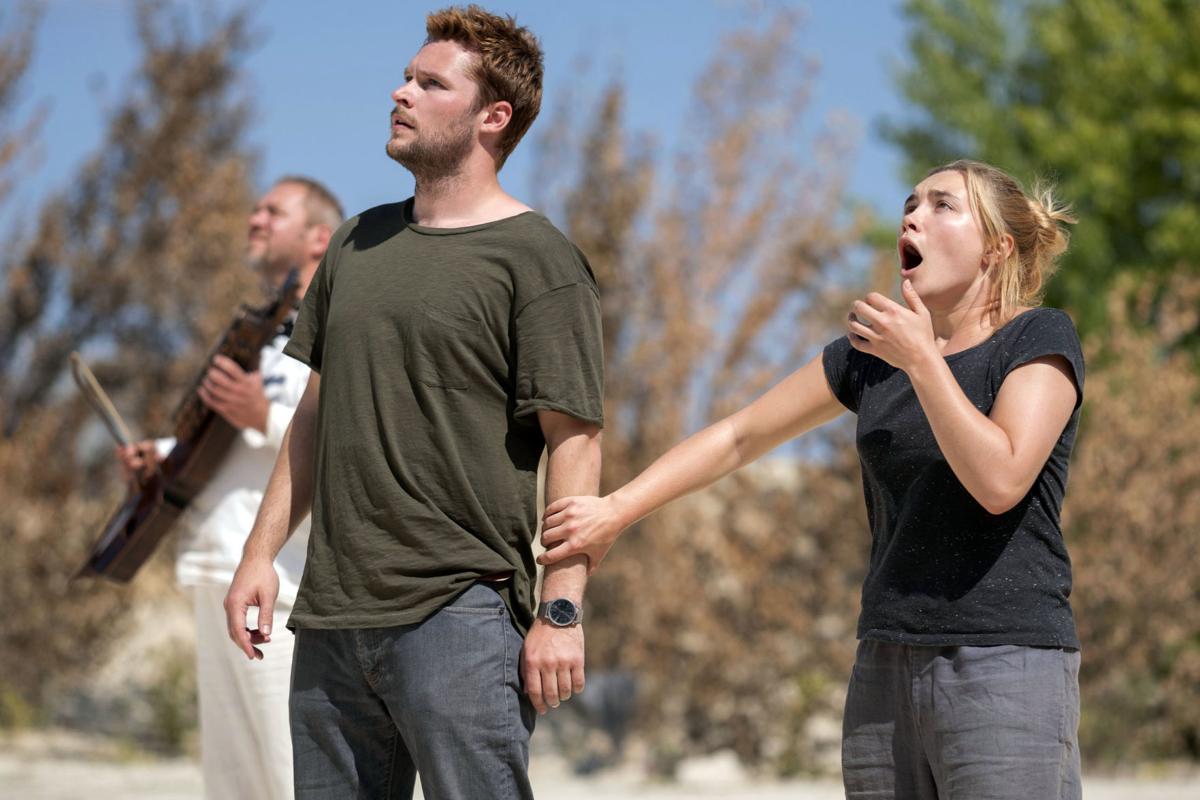 Jack Reynor and Florence Pugh react in a scene from the horror film “Midsommar.”

Editor’s note: This review includes a spoiler of the film Hereditary. There is a warning before the spoiler.

AUSTIN — Filmmaker Ari Aster made his feature-length directorial debut last year with the sensational A24 hit Hereditary. If you haven’t had the guts to see it, it’s understandable, as it’s a pummeling experience that descends into an emotional and psychological hellscape. However, at the same time, it’s a shame because underneath its shell of terror resides one of the most gripping cinematic portraits of inherited family trauma.

Aster entered the horror genre like a seasoned pro and showed he understands that great horror lets the characters drive the narrative. So when terrible things begin to happen, and the most disturbing imagery ever conceived hits the screen, you feel every ounce of its blood and shrink further from whatever might be lurking in the shadows.

After watching Aster’s sophomore work, Midsommar, at a special screening at the Alamo Drafthouse in Austin, I think it’s evident that success hasn’t hijacked his thinking. Midsommar, also distributed by A24, feels as if a satanic eye sits at Aster’s shoulder, nudging him further into the dark.

Similar to the work of Lars von Trier, Midsommar feels as though a true misanthrope made it. It may not be as intense as Hereditary, but it’s a devilish feast that’s best consumed in multiple servings.

It’s not easy to dance around its secrets, but Midsommar follows Dani (Florence Pugh in a performance that absolutely slays), a tragedy-stricken young woman who is begrudgingly invited by her boyfriend, Christian (a very good Jack Reynor), on a guys’ trip to a fabled Swedish midsummer festival. They arrive at a seemingly pastoral paradise in a remote village, and things slowly turn sinister as the locals reveal their horrid agenda.

Before the Austin screening started, Aster and his cast introduced the film and later participated in a post-screening Q&A via telecast from Brooklyn — one of four locations where Midsommar screened June 18. During the introduction, Aster revealed the source of the film’s inspiration.

“I wrote this when I was going through a breakup [four years ago], but I am better now,” Aster said, before jokingly adding that the film is “down to the last detail, exactly what happened.”

As astonishing as it would be if the statement were true, Aster remarkably illustrates his innermost thoughts and feelings regarding that breakup. Similar to Hereditary, Midsommar has slow-building dread. Fans of Aster’s previous work may know the devil is in the details. Certain wall art or symbols that hang around the characters’ rooms may tease what’s ahead, while cinematographer Pawel Pogorzelski’s camerawork hints at the inevitable. One shot of the group of friends (including William Jackson Harper, Vilhelm Blomgren and the scene-stealing Will Poulter — I guess Aster likes people named Will) entering the festival is about as unsettling as the hotel arrival in The Shining. The camera twists and turns in ways that fries the nerves until they’re crisp.

Although, Midsommar doesn’t ratchet up the same level of intensity as Hereditary. If you thought the flashes in the film’s trailer of a split-open grizzly bear on a table and all the deathly stares from the people dressed like they’re in the Manson family had you greased for one of the fiercest cinematic experiences, don’t hold your breath too much. Midsommar undoubtedly has some of the most messed-up images ever to be put on the big screen (let’s just say large mallets may be involved), but no exorcism could remove the sight of (*spoilers for Hereditary*) Toni Collette slowly decapitating herself with a string of wire.

That said, Midsommar isn’t crafted to evoke the same feelings as Hereditary. Both films deal with grief and colorfully visualize their themes through a nightmarish channel in different ways. Specifically, Midsommar depicts the dysfunctional dynamic in a codependent relationship. In the film, Dani and Christian, from the onset, are in an unhealthy relationship. At the start of the film, Christian doesn’t even want to be with Dani anymore and initially had planned to keep the vacation to himself. Both don’t seem to recognize their own needs and wants and are in search of external sources of validation and control. How the relationship unfolds in the film is what makes Midsommar the stunner that it is.

There’s so much to unpack. I haven’t entirely wrapped my head around it and made sense of it all. Perhaps I haven’t made sense here. Like Pugh said during the introduction, it’ll turn your head into mashed peas. Aster’s film is destined to upset some people, and, to Aster, that seems like a perfectly adequate reaction to have. A24 movies are meant to provoke you. (Have you seen High Life yet? Jesus.) But that’s what separates A24 from the pack and is why I keep drinking from its deranged well. Where else am I going to see the weirdest stuff imaginable and walk back into my life and think, “Oh, well, this isn’t so bad by comparison?”