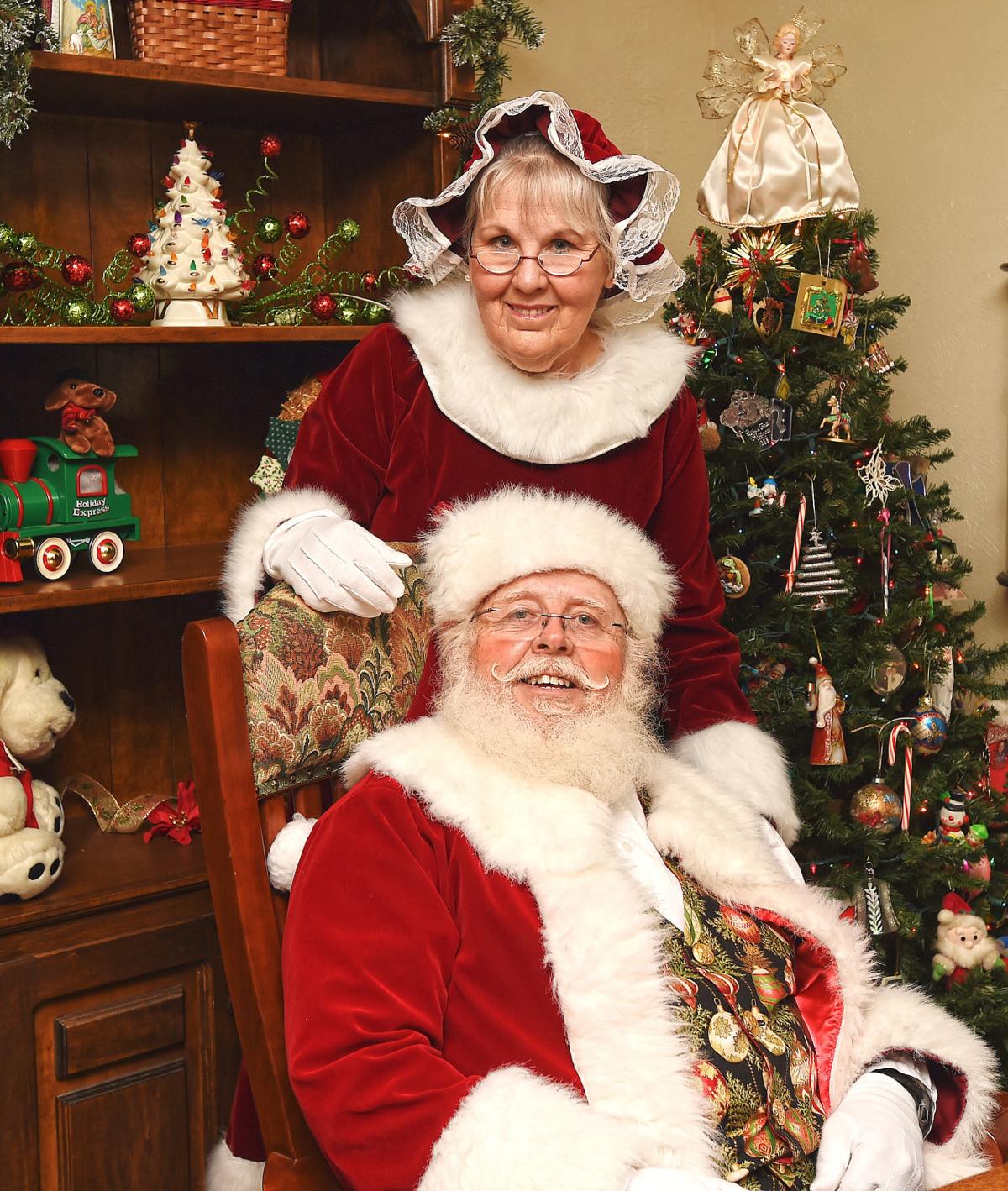 Debbie and Mark Mosley have a seasonal job as Santa and Mrs. Claus. The pandemic hasn’t canceled Christmas, but it has changed the way professional Santas are doing their jobs. Most Santa performers are 60 or older, which makes them especially vulnerable to COVID-19. 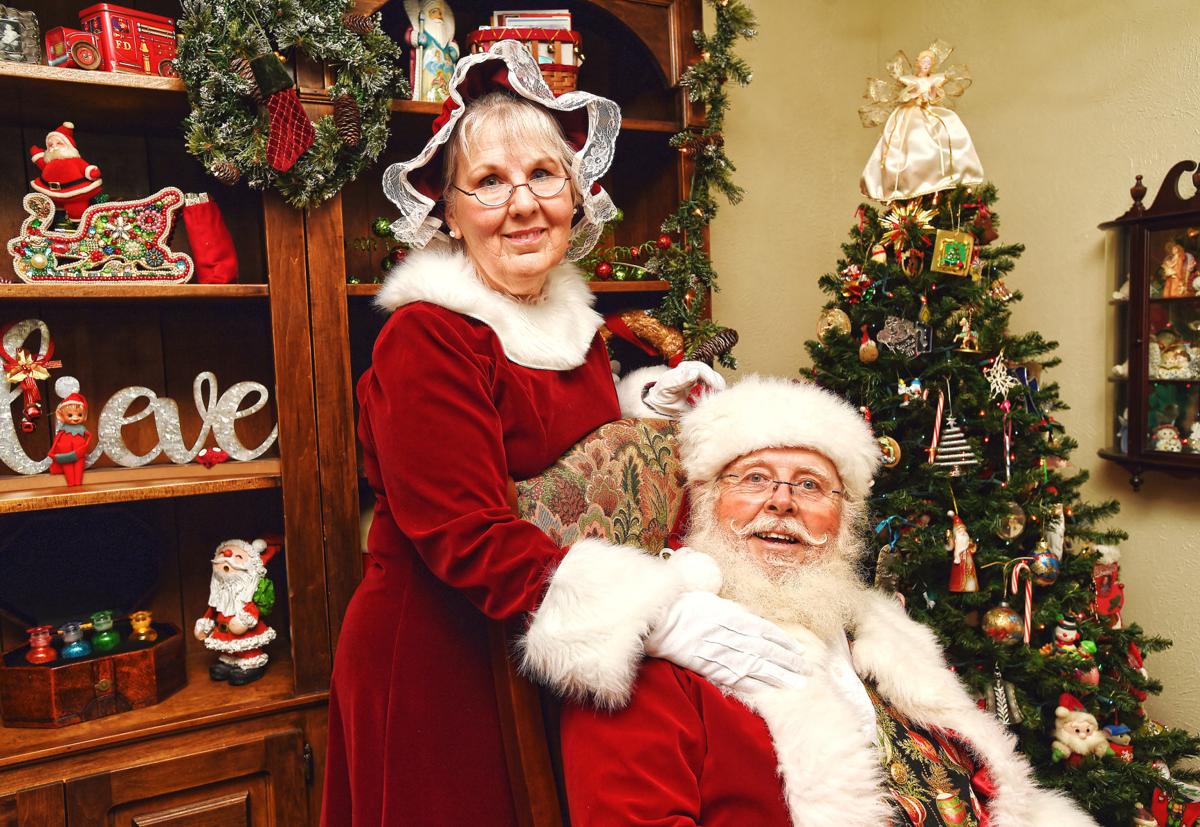 Debbie and Mark Mosley of Denton have been making virtual visits with kids as Santa and Mrs. Claus. 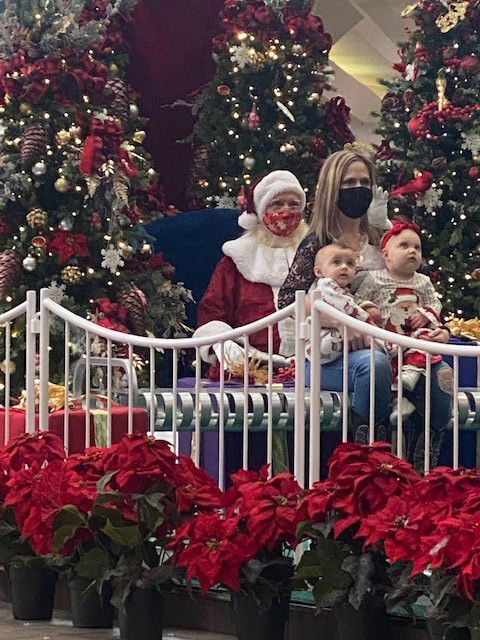 Debbie and Mark Mosley have a seasonal job as Santa and Mrs. Claus. The pandemic hasn’t canceled Christmas, but it has changed the way professional Santas are doing their jobs. Most Santa performers are 60 or older, which makes them especially vulnerable to COVID-19.

Debbie and Mark Mosley of Denton have been making virtual visits with kids as Santa and Mrs. Claus.

As COVID-19 infections continue to spike in Denton County, professional Santa Clauses in the area say they are changing the way they do their Christmastime gig.

Most professional Santas belong to a demographic that is vulnerable to contracting the coronavirus and suffering its more harrowing symptoms. They are men over the age of 60.

And the Santa Claus gig?

It’s not known for social distancing.

“It is so fun,” said Denton resident Mark Mosley, also known as The Singing Santa. “It’s the best job there is.”

Mosley shares the gig with his wife, Debbie, who occasionally plays the role of Mrs. Claus but spends most of her day managing Santa Claus gigs. The couple are retired elementary school teachers who found their love of children translated perfectly into being Santa.

The couple got into the business last year and said the seasonal gig of working company parties and visiting private homes is a good supplemental income. This year, though, made the couple rethink their plan.

“I personally have a comorbidity,” Mark Mosley said. “Not only am I 65, I also have a heart condition. I had to be more careful. We found that the virtual side of it is the best way to do this.”

The couple knew pretty quickly this Christmas could be disrupted by the virus.

“Back in the spring, we went to a Santa convention,” Debbie Mosley said. “It was a general meeting of the Lone Star Santas, one of the companies we work through. We went to that meeting the week they said we needed to do social distancing.”

Mark Mosley said they haven’t heard of a single person at the convention contracting the coronavirus.

But it wasn’t long before they knew they would have to reconsider this Christmas season.

“We had signed up for some Santa schools late in the year last year and got into them,” Debbie Mosley said. “We paid deposits to participate in the Branson school and another one in Houston. The Houston one canceled theirs, and we canceled on the one in Branson. It seemed like too big of a risk.”

There are still some clients who are asking Santas for hire to visit with groups of 30 or more people, but the Mosleys have declined those jobs. Instead, the Mosleys decided to offer their services virtually through the companies they work with. Debbie said “the tech part has been frustrating,” but they discovered that the cheerfully decorated bookshelves they sat in front of ended up working better than the green screen one company had planned for the online visits with St. Nicholas.

Mosley learns a little about the children he greets online from their parents, then chats with them about their Christmas wish lists. He does a check-in about their naughty or nice status and entertains questions about the North Pole, the reindeer and the goings-on in the toy workshop, where elves are hammering, testing batteries and assembling the prized possessions.

“We have some simple elf magic, and then we make snow,” Mark Mosley said. “This is really good for kids who are frightened of Santa Claus. When we do this in person, we get the kid to start stirring the snow, and then I start stirring too. But the elf magic we can do online, too. When a kid is afraid, Debbie is a kid whisperer. When we meet virtually, we read stories to them, tell them what’s going on at the North Pole.”

Virtual meetings don’t change some of the things Mosley does. He still asks children to obey their parents. (“I ask them to be first-timers, do what Mom and Dad ask you to do the first time, not the second or third.”) And he always signs off on visits reminding the children he will be stopping by on Christmas Eve.

“I ask if they have a fireplace,” he said. “If they say yes, I tell them to ask their parent not to light a fire. If they say no, I tell them, ‘Don’t worry, I have a key that only works on Christmas Eve.’” He holds up an old-fashioned key as proof.

At Golden Triangle Mall, visits and pictures with Santa are still happening — but differently. Families are asked to make reservations and to select their photo packages online before dropping by. Families can visit without getting photos, but those with reservations will get to see Santa at their selected time.

The scene looks a lot different this year. Usually, Santa presides over the bustle from a winter wonderland house.

The 2020 set is simpler. Santa, played for years at the mall by Christopher Nicholas Claus, sits on a lush chair, nestled among a small copse of Christmas trees trimmed in handsome, classic ornaments and white lights. A large bench sits about seven feet away from Santa. Claus wears a mask that says “Merry Christmas” in joyful cursive and chats with children from his chair. If the parents have purchased a photo package, the children turn around to face the camera, posing next to a stack of great big wrapped gift boxes.

“We did some things to make sure families got the photos they want,” Ludemann said. “We arranged the trees around the chair so you don’t have to see storefront signs behind him. We clean the bench off after each group, and the bench also serves a purpose. With kids sitting on the bench, you don’t see Santa’s extremities, which are always kind of covered up by holding kids on his lap.”

Photographer Drucilla Saxton-Wallace said the team sanitizes the high-touch areas on the set, and said children ages 3 and older have to wear masks to visit St. Nick.

“If you’re going to be up here on the set, you have to wear your mask,” she said.

“Absolutely not,” he said. “It wouldn’t just be like we were punishing the kids, it would feel like punishing me, too. I just love doing this. I’ve been doing it for years, and I love seeing the kids. But it’s never just kids. The youngest I’ve ever had up here was 46 hours old. Her parents stopped by on the way home from the hospital. The oldest I had was a lady who was celebrating her 104th birthday.”

One mother and daughter have come to the Santa set at Golden Triangle to have their picture taken yearly for the past 25 years.

“That’s the thing, this is a tradition,” Ludemann said. “We could do it with social-distancing guidelines. So why not keep the tradition?”