Available Friday on Digital HD and On Demand.

They say imitation is the sincerest form of flattery. At the same time, it’s also one of the laziest routes to filmmaking. Think about all the countless imitators that sprung up to try their hand at reproducing the claustrophobic body horror and deep-thinking nature of Ridley Scott’s 1979 feature Alien. The film became a classic and brought on its fair share of sequels and spin-offs, and it's had even more shameless rip-offs.

However, Irish filmmaker Neasa Hardiman’s spookily timed pandemic horror film, Sea Fever, is one of the better works to be cut from the same cloth. Although it may suffer from a watered-down script and powerless characterization, there's hold-fast tension in place to keep it above surface level.

From the get-go, Sea Fever's genetic makeup can be aligned with the structure of Scott's film. Its title sequence alone, set in the vastness of the sea, showcases a disjointed version of Helvetica Black font, with the letters slightly pushed away to highlight an unsettling tone. As the text fades away and the image of a jellyfish enters just as quickly as it disappears, we plunge into a journey with a diverse group of characters –– just swap outer space for the ocean. Along for the ride is an Irish marine-biology student named Siobhán (Hermione Corfield), who sets out for a week on a worn-out fishing brawler to study the behavior of whatever the crew nets. (Fingers crossed for Siobhán that it's just fish.)

Siobhán’s instructor gives her a good pep talk akin to Smalls’ mother in The Sandlot, about getting her knees dirty, making friends, and enjoying more aspects of work than continually sticking her nose in books. This advice has her feeling a little more optimistic about the adventure. But it's not long until some figurative dirt is tracked on board when Siobhán reveals herself to be a redhead to the crew. Married ship captains Freya (Connie Nielsen) and Gerard (Dougray Scott) note that it's an omen of bad luck for red locks to accompany them at sea. (I guess we can eradicate the hope of encountering mere fish.) 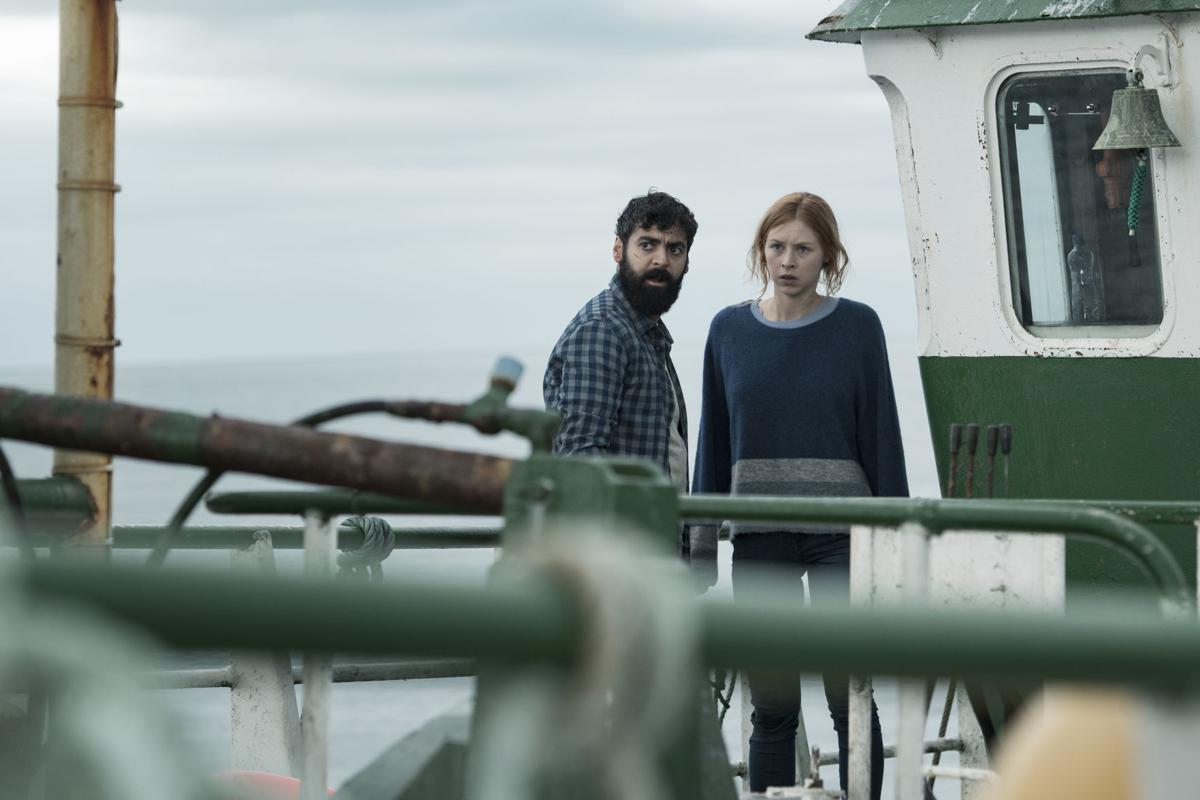 Dougray Scott as Gerard in the sci-fi film, “Sea Fever."

Jack Hickey, left, as Johnny and Dougray Scott as Gerard in the sci-fi film “Sea Fever."

From left, Hermione Corfield as Siobhan, Dougray Scott as Gerard, Ardalan Esmaili as Omid and Connie Nielsen as Freya in the sci-fi film “Sea Fever."

Dougray Scott as Gerard in the sci-fi film, “Sea Fever."

Jack Hickey, left, as Johnny and Dougray Scott as Gerard in the sci-fi film “Sea Fever."

From left, Hermione Corfield as Siobhan, Dougray Scott as Gerard, Ardalan Esmaili as Omid and Connie Nielsen as Freya in the sci-fi film “Sea Fever."

It’s during the bookends of the film that Sea Fever gets a taste of its own supply. The opening portion could have spent more time making it known who each of the people are. I believe in subtlety as much as the next cinephile. Still, an entry like this needs those bonding activities, like singing Julie London's "Show Me the Way to Go Home" while exchanging stories about how everyone got various body scars. There was a hint of that when Freya talks about sea mythology and the crew moronically chat about how “stupid” spaghetti is. But even that is grazed over in favor of getting to the action.

Sixteen minutes in, and the detritus is already hitting the propeller. Something has shaken the ship and marooned them in some dangerous waters. During the boat examination, a mysterious substance is oozing out of the lower deck wall. Perhaps it’s a barnacle. Whatever it is, it needs to be removed — and quick. However, the further the crew investigate, the closer they are to meeting their maker.

Sea Fever is an eerie experience for quarantine viewing. The film held its regional premiere at last year’s Fantastic Fest, but it’s only now making a larger splash on Digital HD. The timing of its material certainly shifts the terror up a few notches. When the mystery goop divulges itself as a parasite, you may grind your teeth down to the gums as the characters feel borrowed from a nasty David Cronenberg movie. Eyeballs explode, hands are degloved and everyone fears that the other is infected.

The movie is at its most frightening when it comes to characters questioning whether or not they should head back to shore even if they survive the night. The fire is lighted under the horrifying situation as their water supply becomes contaminated, and they discover what the aftermath of their circumstance could be if they don’t act fast. A scene of Siobhán shining a flashlight into the eyes of each crew member (to check for particles) injects viewers with a fine shot of the heebie-jeebies. (My wife and I wanted so desperately to itch our eyes because its illustration is so vivid. But we had to keep reminding ourselves that our situation with COVID-19 renders that ill-advised.)

The feature’s conclusion is a bit damp, but there’s a curiosity that erupts as the story wraps up. Overall, there’s plenty of blood in the water, but there’s also oil. If Sea Fever had nursed its script and taken a few more passes to boost its originality, Hardiman’s debut would be full-steam ahead into must-see territory. It’s simply sturdy enough to make you queasy, but it won’t rock the cinematic boat.