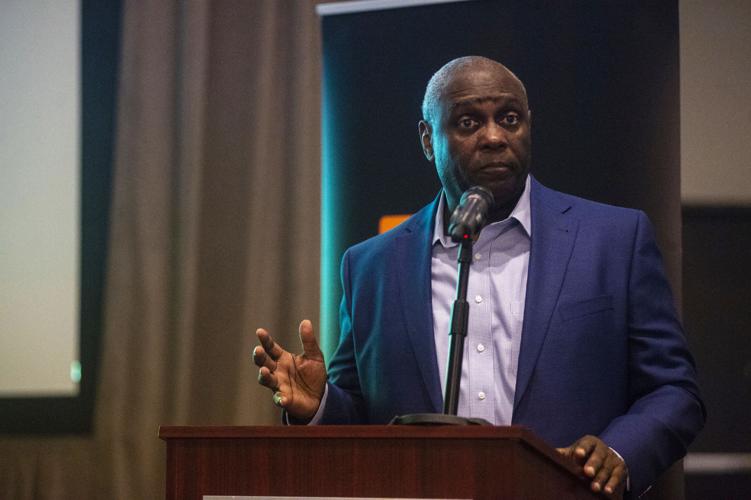 Harry Eaddy, director of the Denton Black Film Festival, says of the event he founded: “It’s not just a Black film festival, it’s a film festival for everyone — anyone who wants to learn about Black culture and wants to build a community.” 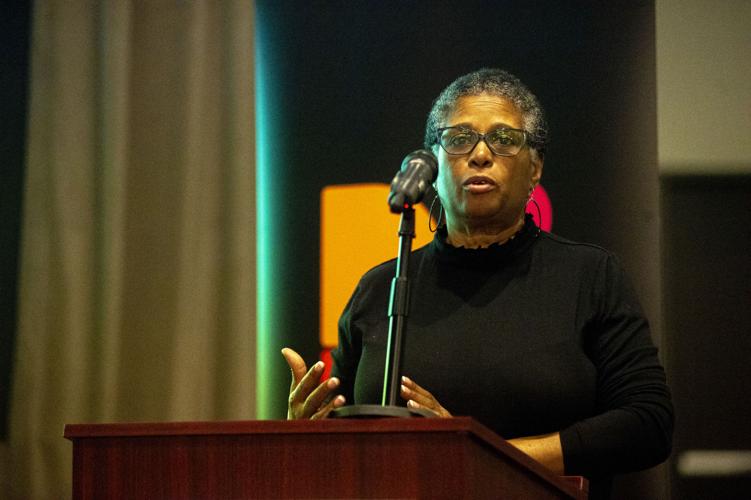 Linda Eaddy, director of film programming for the Denton Black Film Festival, speaks at the event’s 2019 awards ceremony. She gives credit to the festival’s “really passionate volunteers.” “They perform those duties without expecting pay, out of love for the community and love for what we’re doing,” she said.

The winter air was cool and crisp as Harry and Linda Eaddy walked along the Denton Square. The couple had spent their afternoon watching films at Thin Line Fest, known for featuring documentaries. As they made their way back to their car, Harry turned to Linda and said, “You know, we don’t really see a lot of Black cinema. We would probably benefit from a Black film festival.”

Harry worked in the tech industry as head of sales, but he knew nothing about starting a film festival from scratch, particularly one in a community where, at the time, only 8% of the population was Black. Yes, he had an appreciation for the arts, and was something of a painter himself, but Harry wasn’t joking.

That was eight years ago. Now, the Denton Black Film Festival, under Harry’s leadership as executive director since 2015, is presenting its eighth year of programming.

In its first year, more than 800 people attended the day-and-a-half event. Now, the number has grown to more than 8,000 for what has become an 11-day virtual event beginning Thursday and continuing through Feb. 6. The festival will feature 115 films, with more than 40% them directed by women.

When the festival began, its only focus was film, but when Harry became the festival director in its second year, the DBFF expanded to add music, visual art and spoken word. The festival also added comedy, artist panels and workshops in the years following.

The African American Scholarship Foundation, of which Harry serves as president, became the festival’s founding sponsor, helping him turn his vision into reality. The Denton Black Film Festival is dedicated to serving, educating and inspiring the Denton community by sharing Black culture.

“The Black experience has been everywhere in the world, but most of our stories are not told,” Harry said. “I thought it would be good to share Black culture and allow people to learn more about it, not only the history but the culture. Whether it’s dance, music or visual art, it’s really who we are.”

‘A film festival for everyone’

Some might have found it overwhelming to plan a film festival without prior experience, but not Harry. He said it felt like a rush. As the founder of the DBFF, he spent its first year focusing on creating the infrastructure to get the festival up and running. Most of that time was spent organizing and raising money for the event. He began planning the festival by building a team of people he thought were “better and smarter” than him: His wife, Linda, curated the films, Dallas producer Frederick Nichelson curated the music, and University of North Texas professor Neil Foote handled public relations.

The team had its first meeting for the inaugural festival in August 2013, but they had no venues to screen the films and no films to screen, so they reached out to a few filmmakers for content. The team settled on using local spots such as Rubber Gloves Rehearsal Studios and the Campus Theatre as venues. Somehow, they managed to put together a festival featuring 13 invitational films in just a few months.

In the festival’s initial stages, it was difficult to make people aware of the event. The festival didn’t boast any big-name celebrities or big feature hits, so most people heard about the first festival through word of mouth.

“We stopped people,” Harry said. “We saw them at the universities, we talked to them in grocery stores, and some of our friends came. The good thing about it is that we had a fair amount of diversity even in the first one. People had a natural curiosity about what the festival would look like.”

As the festival garnered attention, people questioned Harry about why he would host a Black film festival in a city with such a small percentage of Black people.

“My answer is why not?” Harry said. “It’s not just a Black film festival, it’s a film festival for everyone — anyone who wants to learn about Black culture and wants to build a community.”

‘The sky’s the limit’

It’s Nov. 5. With the 2022 festival just a few months away, it’s crunch time for Harry and his team.

Harry spent one Friday afternoon in a small conference room tucked in the corner of the Patterson-Appleton Arts Center. He was juggling incoming phone calls, a video interview and a conference call all at once. A voice echoed from his computer, drawing his attention to the screen.

“Can you repeat that name?” he asked while scribbling on his notepad.

“I’ve never heard of that artist,” Harry said. “He wants to know whether we’ll pay him. … We’ll have to see about that.”

Harry believes that part of the charm of the festival is the diversity of its audience. Of course, different groups bring their own viewing habits. “If you haven’t noticed, Black folk are colorful people,” said Harry. “We laugh, we talk, even during movies.”

The week prior, on Oct. 28, the DBFF team filed into the Campus Theater for a screening.

“Michael B. Jordan appeared onscreen, and a number of women yelled, ‘Oh, thank you, Jesus!’” Harry recalled. “I think people from different ethnic backgrounds come and start talking, too. They realize that it’s a free environment.”

Although Harry’s wife, Linda, had experience with events planning, she had no prior experience with the film business. But it didn’t take her long to develop an understanding of the time, money and resources necessary to get the film festival off the ground.

“Festival planning is time-consuming — it’s a lot of work,” Linda said. “Because we are nonprofit, money is always the biggest challenge. Very few people receive any money for the work they do. We have been fortunate to have really passionate volunteers that are good at what they do. They perform those duties without expecting pay, out of love for the community and love for what we’re doing. They feel like we’re making a difference.”

The DBFF’s $200,000 budget includes funding from the city of Denton, donations and sponsorships from universities such as UNT and Texas Woman’s University. It also receives other helpful resources such as media attention from local stations and newspapers that promote the festival.

“There are never enough resources, both financial and volunteer-wise, to do the things that we envision,” said festival music director Nichelson. “Harry Eaddy has a very broad vision. The sky’s the limit for him. His attitude is sort of like, ‘Hey, just say what you want to do, we’ll figure out how to get it paid for.’”

That vision includes films from a variety of styles and genres that display the broadness of Black culture. Past festivals have included horror films, documentaries, films for adults, for kids, and films by underrepresented minorities such as Black Seeds, which was written and directed by Bayer Mack.

This year, the festival will feature award-winning documentaries such as Grandma’s Roses, a raw, intimate documentary exploring the love women invest in their families and communities; Afro Algorithms, a 3D animated short film in the Afrofuturist genre; and Texas high school shorts such as “I Am Not the Norm,” a celebration of Black women showcasing individuals united by a common bond. Proceeds from the annual festival help fund scholarships for African American students in Denton.

Unlike some festivals, the DBFF approaches its planning process from an audience standpoint, considering what the community would most like to see. Its team members must decide on venues, submissions, budgeting and profits. But due to the pandemic, that planning has undergone an added degree of effort, operating virtually not only this year but last.

“While doing an in-person festival is difficult, doing a virtual one is extremely hard because you’re removed from your audience,” Harry said. “Everyone is Zoom-fatigued, so we’re trying to figure out how can we produce compelling content that would inspire people to come.”

Part of that inspiration is the way the DBFF prioritizes social awareness.

“We try to have films and conversations, panels and workshops, around social justice issues,” said Linda, recalling past programming that included films dealing with criminal justice, housing and the environment. “We know that any time there are problems in society, nine times out of 10 people of color are impacted even more.”

This year’s segment on social justice will feature a conversation with Michelle Gross, president of Communities United Against Police Brutality, a web series called MINE directed by Randall Dottin and Luisa Dantas, and a photo exhibit titled Take a Breath by Beatrice McBride.

One of the best things about the festival for Harry is the warmth it generates. In pre-pandemic times, volunteers would greet you at the door. If you are a repeat festivalgoer, they would ask how you’ve been, say they were happy to see you again.

Harry loves watching strangers become friends. People will strike up conversations about the film they watched, the comedy they laughed at or the music they listened to. Families come to the festival together, split apart, then come back together and share their different experiences over dinner.

“It allows people to have conversations that they wouldn’t ordinarily have,” Harry said. “In most communities, different races and ethnic groups are separated, but we encourage people to come together to enjoy something. We encourage people to drop all the pretenses and misconceptions and realize that these [films] are just about people’s lives.”