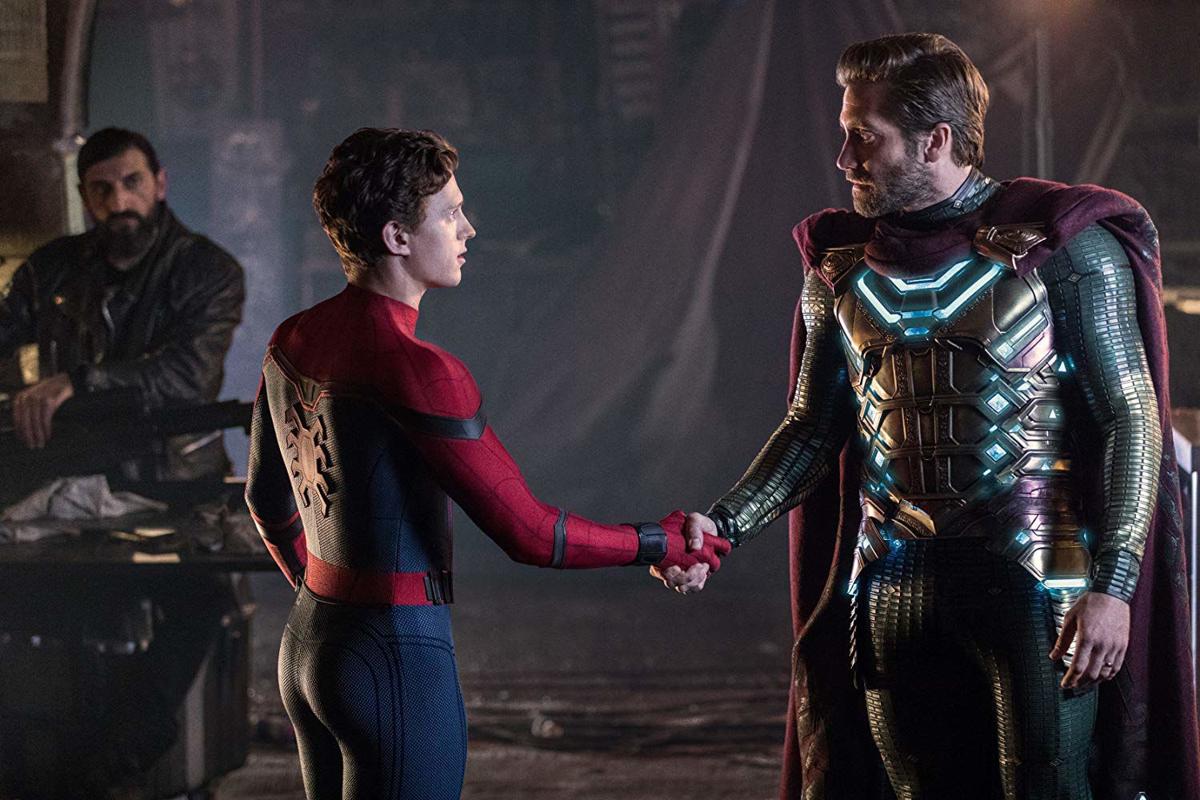 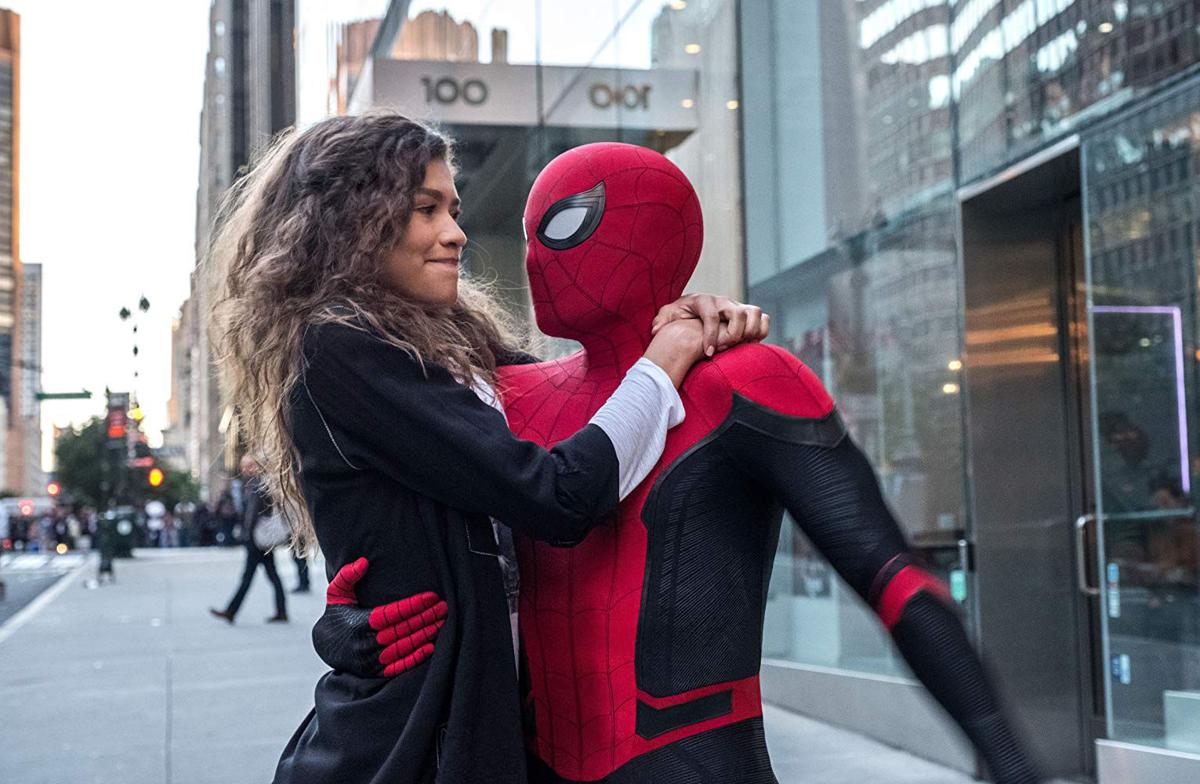 MJ (Zendaya) finds herself in the hands of Spider- Man (Tom Holland) in “Spider-Man: Far from Home.”

The effects and action scenes are adequate, but not quite all the way there, in "Spider-Man: Far from Home." 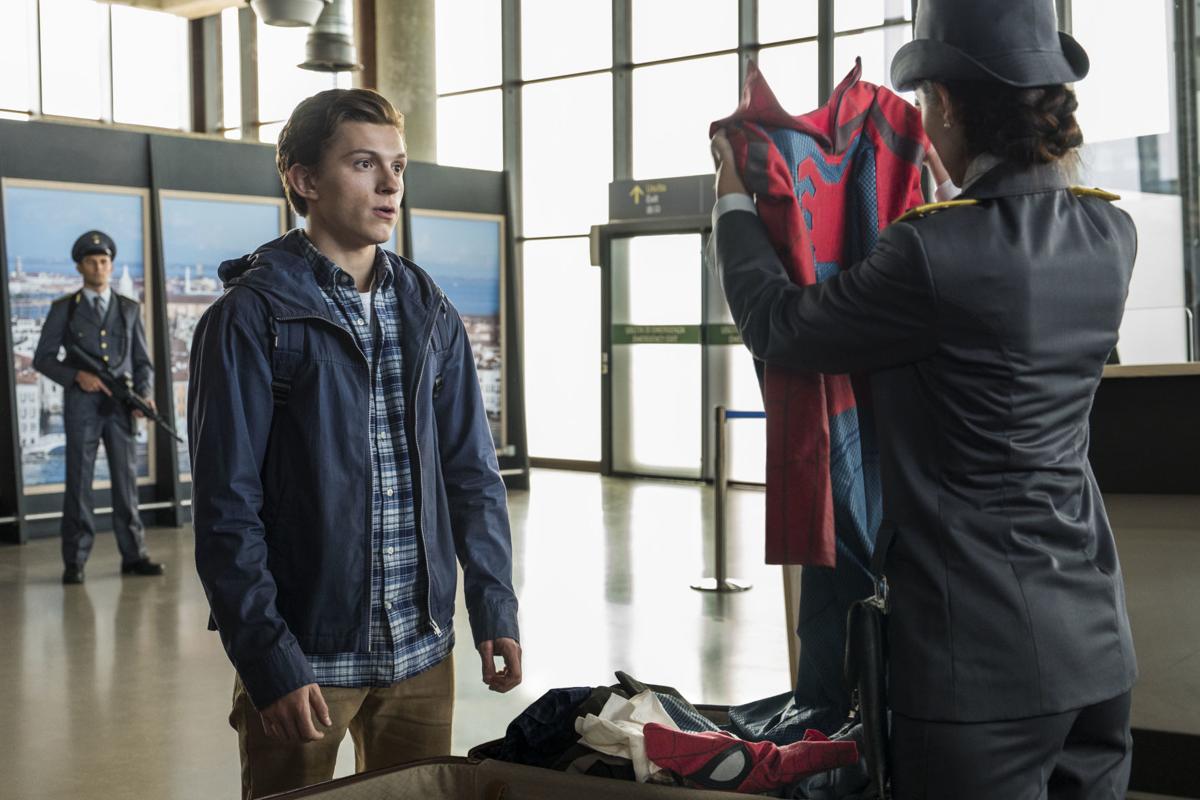 Avengers: Endgame is a tough act to follow. I pretty much said the same thing last year when I reviewed Ant-man and the Wasp following Infinity War. I mean, really, how can you top the tears and triumphs of Endgame? It was 10 years of story building that delivered an epic conclusion. But like Ant-Man and the Wasp, you’ll quickly get over the thought of Spider-Man: Far From Home being a sized-down adventure because it spins laughs and smiles right away and doesn’t stop.

Far From Home‘s opening feels like a continuation from the wrap-up of 2017’s Spider-Man: Homecoming. Things are tense as Nick Fury (Samuel L. Jackson) and Maria Hill (Cobie Smulders) are investigating an area in Ixtenco, Mexico, that has energy levels that are off the charts. Once they arrive, they see a giant elemental monster made out of rocks, dirt and earth. (Think Sandman from Spider-Man 3 but a little more textured like Thing from Fantastic Four.) Whatever it is, it doesn’t look like someone who will be joining the Avengers anytime soon.

That’s when a mysterious figure appears donning a suit (as the film notes) that looks like the aesthetics of Doctor Strange and Iron Man got married and placed a fishbowl containing smoke atop its head. The mystery man is Mysterio, aka Quentin Beck (an excellent Jake Gyllenhaal), a powerful and wicked smart being from Earth in another dimension. As Far From Home‘s trailer indicates — because we’re keeping it spoiler-free here — the way the Avengers swept up the dust and returned the people to their loved ones had some negative effects. It opened up the multiverse (a la Spider-Man: Into the Spider-Verse) and brought in these elemental monsters who destroyed Quentin’s world. Quentin crossed over, too, to contain the situation before this world turns to ash as well.

Compared to Homecoming, these Captain Planet-powered monsters don’t have the stakes that Michael Keaton’s Vulture character brought to the table. That scene between Peter Parker (Tom Holland, one of the most charming humans alive) and Keaton in the car is as good as the Oscar-winning The Departed when Leonardo DiCaprio and Matt Damon chat on the phone. But tonally, Far From Home is way different than Homecoming. While the film opens like it’s about to go down (when Gyllenhaal’s Mysterio tells Nick Fury and Maria Hill, “You don’t want any part of this,” before blasting a Laser Floyd show out of his hands), the record soon scratches to reveal a B-side to your expectations.

After the intensity is high, Far From Home fades to black and transitions into the Marvel Studios logo, but it doesn’t play the usual strings-and-drums musical track. Instead, it’s Whitney Houston’s “I Will Always Love You,” making you think Ryan Reynolds is going to pop out wearing a Deadpool suit any second. That doesn’t happen, but what does unfold after is equally as funny. I’ll let the film deliver its joke there, but what I will say is Far From Home seems to be enjoying poking fun at all the theories fans came up with after the events of Endgame. Immediately, I felt like the movie was opening up the universe to a meta-level like Thor: Ragnarok.

While it’s an extremely funny movie about Peter and his friends (Zendaya and Jacob Batalon) going on a school trip across Europe, Far From Home is no Thor: Ragnarok. Director Taika Waititi knew how to wrangle comedy out of Ragnarok, and still throw in the dramatic spices required to give it weight. Jon Watts, who returns to helm Spider-man after Homecoming, doesn’t have it quite as under control. Far From Home will have a silly moment and quickly swing over to drama, losing its footing in the process.

For instance, there’s a scene when Peter tells his classmates and teachers (including Tony Revolori, Martin Starr and J.B. Smoove) that there’s a mountain goat outside their bus window. They all look and, in a split second, he jumps through a roof opening and fires off some web to take down a drone that he accidentally launched. He does so and safely lands back inside to essentially say, “Made you look!”

Then, we’ll venture on over to some forced drama. Any sequence of emotion, such as one with Peter and Happy Hogan (Jon Favreau) reflecting on Tony Stark, is a bit heavy-handed. Thankfully, Holland is an exceptional actor and can mostly save it from it falling out of Watts’ hands.

Did I mention how goofy this movie is? It’s tiptoeing around Iron Man 3 territory in that regard. But it’s forgivable because Far From Home has an admirable confidence. It gets weird, folks. Once we reach the halfway point and we know what’s going on, you begin to feel that the movie really does live up to its title. The film is so distant from anything we’ve seen before in the Marvel Cinematic Universe.

This second Spidey film is a pleasant hangout movie set overseas. The action doesn’t blow you away, but it simply gets you by (but Homecoming wasn’t a good action movie, either). The focus of these films is its characters, and that’s what makes the new Spider-Man films the joy that they are. Although I have to say, there is one extended sequence that blurs the line of reality and fantasy that is a crowning achievement for the MCU. You’ll know it when you see it, but it’s incredible. So, the film isn’t completely visually uninteresting, despite the effects not looking fully rendered and action scenes using a heavy amount of green screen.

Far From Home gets tangled in its own web a bit, but it’s a satisfying chapter following Endgame. I can honestly say it’s miles better than the Ant-Man movies and this year’s lackluster Captain Marvel. It’s different and keeps you on your toes, which is what you want out of a franchise that has 20-plus movies in it. It’s slightly above the midrange of the MCU.

Oh, and do stick around for all the credits. There’s a mid-credits stinger that is probably the best one yet (next to Black Panther) and a final one that keeps your curiosity alive. Go have a blast!