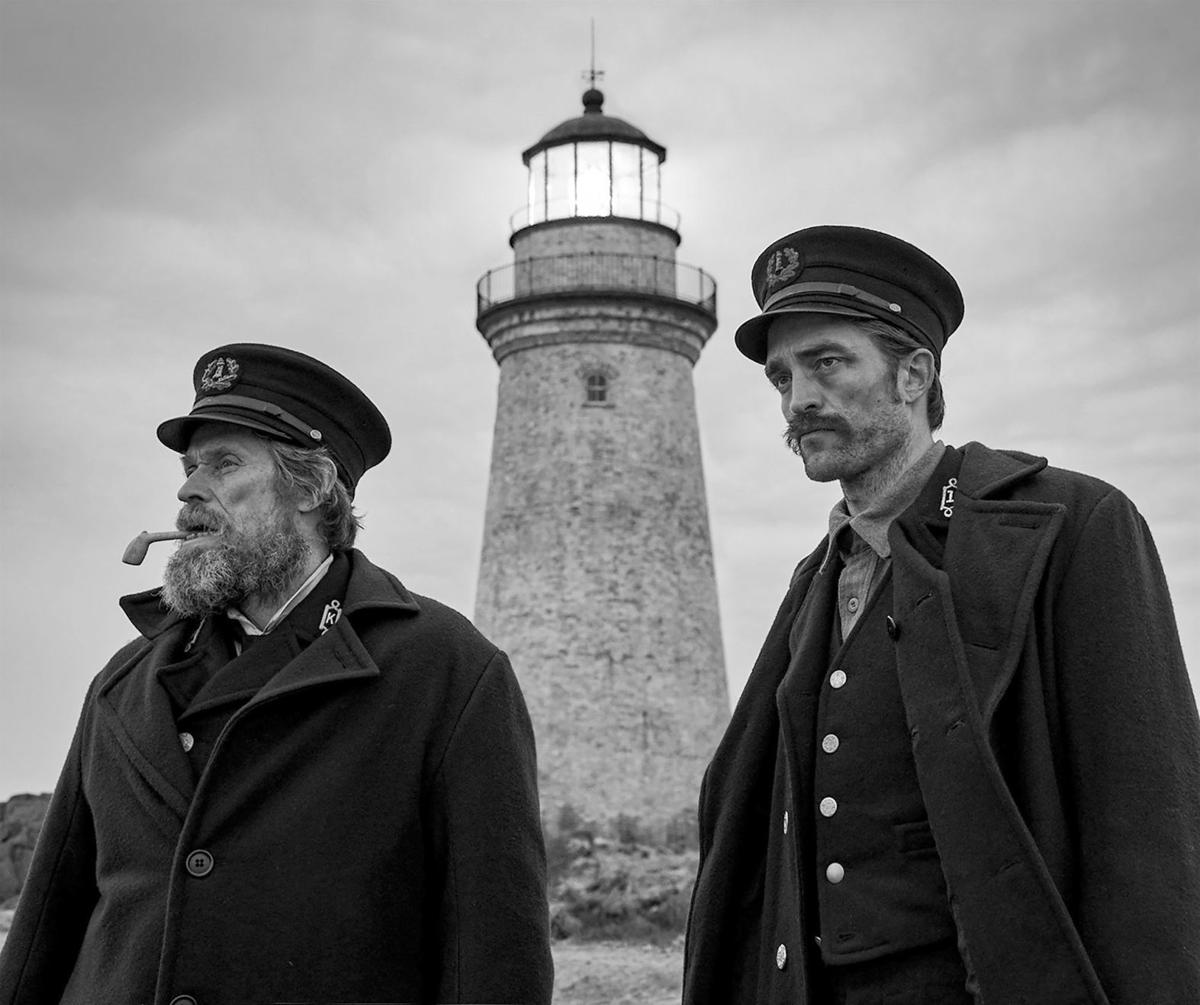 Willem Dafoe, left, and Robert Pattinson star in “The Lighthouse.” 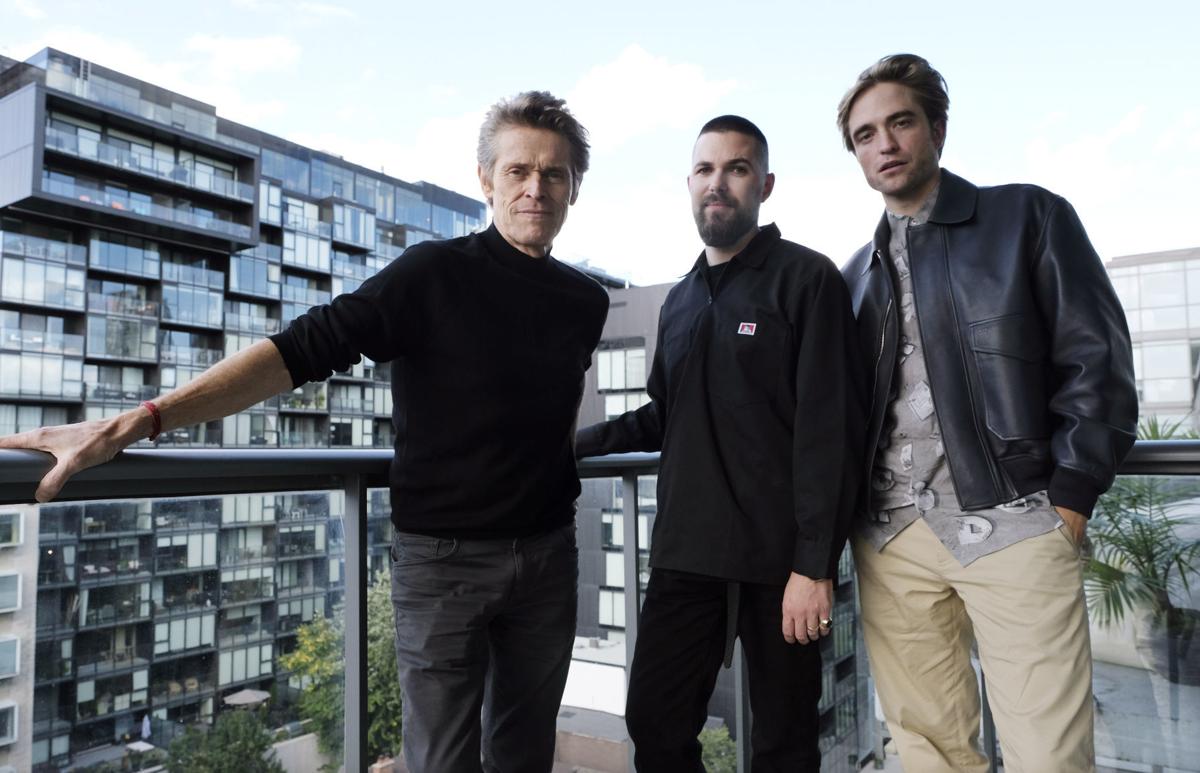 This Sept. 7 photo shows writer-director Robert Eggers, center, Willem Dafoe, left, and Robert Pattinson posing together to promote their film, “The Lighthouse,” at the Thompson Hotel during the Toronto International Film Festival in Toronto.

Willem Dafoe, left, and Robert Pattinson star in “The Lighthouse.”

This Sept. 7 photo shows writer-director Robert Eggers, center, Willem Dafoe, left, and Robert Pattinson posing together to promote their film, “The Lighthouse,” at the Thompson Hotel during the Toronto International Film Festival in Toronto.

Last week, I touched on how strange but fascinating Robert Eggers’ sophomore film The Lighthouse is. It’s an incredibly deep film about two lighthouse keepers (effectively portrayed by Robert Pattinson and Willem Dafoe) who try to keep their sanity intact while the waves of isolation pull them away from the shore. It’s a story that may require a brush up on Shakespearean prose and Greek mythology (specifically Prometheus).

Similar to A24’s other released film The Rover, also starring Pattinson, The Lighthouse is a challenging experience that will make your mind run amok, to the point where you begin to feel it slipping away.

However, as much as The Lighthouse heightens your anxiety and disturbs the comfortable, Eggers (director of The Witch) makes the kind of films that are a rare breed. He does not succumb to Hollywood’s standards. The artists of the past inspire Eggers, and whether he knows it or not, he is preserving classic cinema and experimentation.

The Lighthouse is motored by two of the best and most intense performances of the year. Pattinson and Dafoe spit Eggers’ words (Eggers and his brother Max penned the screenplay) with such stinging authenticity that multiple viewings may be mandatory in order to grasp the language. Don’t let that intimidate you, either. The film works marvelously as a mood piece, as well.

The Denton Record-Chronicle had the chance to speak with Eggers about cinema preservation, how he maintains normalcy amid his dark obsessions and the art of mastering upsetting imagery.

Preston Barta: Something I’ve always admired about you as a filmmaker is your daring to challenge viewers. Additionally, you seem to be working hard to maintain a bridge to classic cinema. Is this something that you have recognized about yourself — directing films that keep conversations about such films as Häxan (1922) or the work of Ingmar Bergman alive?

Robert Eggers: Well, gee whiz. Thank you for the compliment. It’s not that I need to keep the conversation alive, but those are the things that I am inspired by. All the filmmakers, composers, visual artists and writers that I love the most are all dead. That’s just kind of why. I think as far as communing with the folk culture of my region in these two films, and in my interest in the past, I do find in that work that there’s a preservation of the past, which is semi-intentional. But as far as trying to commune with the saints of cinema, I suppose that’s my own personal business that really has to do with what I am influenced by.

How early on in your life were you taken by artists who are no longer with us as opposed to contemporary artists?

There was a clear line in the sand. Growing up in rural New Hampshire, one is generally going to see the work of Spielberg and Tim Burton [whatever was playing at the multiplexes], and there’s a lot of good stuff there. It’s stuff like Star Wars that made me want to start telling stories, even though I don’t go to watch the Star Wars movies anymore.

Generally, as a kid, it was period pieces and sci-fi, anything set in other worlds that I really preferred. Dick Tracy and Robin Hood were preferable to me than Die Hard. And when my parents would rent movies, I would find them interesting, even ones that I would find boring today. As a kid, there was something compelling to me about those worlds. I enjoyed going to Colonial Williamsburg, Plymouth Plantation and all those living history places. I truly always liked that stuff.

There’s a painter named Hyman Bloom, who passed away about 10 years ago. He was living in New Hampshire, born in Lafayette and integrated to Boston when he was a kid. He was a mentor of mine. The time that I had met him, when I was ten or 12, I was more interested in being a visual artist than a filmmaker. I was really into comic books, and he gave me a book of [Nuremburg artist Albrecht Dürer] engravings and other northern Renaissance artists like Martin Schongauer as a gift. He said, if you can draw this stuff, you can draw anything. It was at that point that I threw my comic books in the garbage and became a hardcore snob all the way.

Why do you think you chose to make this film and explore these feelings of isolation at this point in your life?

Frankly, I made it because it was the one film that I wanted to make that got greenlit. Am I glad that it was my second feature? Absolutely. But if one of the other things were greenlit, I might have been just as happy. I’m not sure. But it was great to be working with RT Features, A24 and New Regency Pictures, and for them to allow so much incredible and privileged freedom.

Obviously, I’m not going to make another movie in 1.19:1 in black-and-white [for how specific it is to this story]. I hope to make another black-and-white movie one day. Maybe even more than one. Getting your hands on black-and-white film stock becomes more and more difficult every second of every waking day. The format alone might be something that, if I get the opportunity to still be making films in 20 years, will stand out.

Between this and The Witch, do you have a fear of pecking birds that you are trying to exorcise?

What does life look like for a man who creates dark stories about witches and madness? What do you do between projects?

My in-laws often laugh because they find these articles about me where I’ve been [against my own will] posed in a position where I’m scowling and underlit, highlighting the semi devilish bones in my forehead, and the headline is something like, ‘What Robert Eggers knows about everything f’d up.’ But my in-laws know me as someone who pushes a stroller, changes diapers and helps to mow the lawn.

As much as I am honestly and earnestly in my study covered in Russian icons, obscure art, reading about the occult and Viking mythology — as it’s been leaked [Eggers’ next project is going to be a Viking revenge drama, titled The Northman] — I go to the grocery store and do normal stuff. This writing that I do enables me to be a happy and well-adjusted person, I hope.

What does your wife think of The Lighthouse?

She likes it. She’s a clinical psychologist. Every time I write a screenplay, she knows how to better navigate her day-to-day and actions around me. [Laughs.]

You and your brother, Max Eggers, did such a great job of casualizing the language of the characters. It’s probably not easy to authentically capture 1890s New England. The same can be said of The Witch. Does tapping into these languages have any sort of effect on your own way of speaking?

No. I think I speak quite poorly in life [laughs]. My vocabulary is not often at my fingertips. I say, ‘You know,’ ‘like’ and ‘uh uh’ all the time. It’s utterly embarrassing. Yeah. It hasn’t helped at all, really. But when I’m writing, I can kind of get there. It took a tremendous amount of work on my brother and I’s part to create the two [what is meant to be] naturalistic dialects that Pattinson and Dafoe speak. But the faux-Shakespearean, Miltonian knock-off stuff — that, because of The Witch and other things that I’ve written, I can just do now. But I can’t speak that way. I need to be sitting at the computer to get into that mode.

With your films, I am constantly trying to figure out how you achieve certain things. I am a meticulous film watcher. I can only imagine you’re the same with the level of detail you incorporate into your stories.

Yeah. I am always trying to learn something. So I am always very conscious of craft, sometimes at the detriment of the watching experience. I’ll often leave a theater with my wife and feel like, ‘Yeah. What was going on in the third act? That was a strange choice.’ And she’ll be like, ‘What are you talking about? Ten minutes into the movie they said [this, this and this].’ And I was like, ‘Ohhh. Well, that was an interesting tracking shot.’

That can happen, and that’s too bad. It’s just a casualty of being a filmmaker. But when a movie sweeps me up in a way that I can’t pay attention to craft, I am excited and eager to watch it again. I love watching things in the cinema that are ideal for experiencing the movie. However, sometimes watching a movie on my laptop is a good way to dissect it, because you are not going to be romanced and engaged by the story. You can be dispassionate and learn what you need to learn about craft.

Speaking of craft, I would like to, lastly, touch on your ability to fashion these excellent scary image montages. It’s akin to watching unsettling avante garde. Is there an art to perfecting those moments?

I think with both [The Lighthouse and The Witch], it’s a bit of gemming things together that seem like they are not going to work. I don’t know how long I can succeed on this trick before it becomes tired. I’m not saying this is tired per se. The way Terrence Malick edits things, even as far back as The New World, it seemed quite shocking in some ways. And now, like any TV show, it can achieve the same look and effect. So, you have to keep pushing.

In the screenplay of The Witch, the witch, the raven and the baby knocking against each other felt like it shouldn’t work. But I think that overload of imagery can be successful. Certainly [director] Ari Aster, in Hereditary [spoilers follow], from the daughter hitting her head on a pole and being buried, is similarly excellent. It’s a juxtaposition of powerful and jarring images, and not necessarily the order that you expect them.