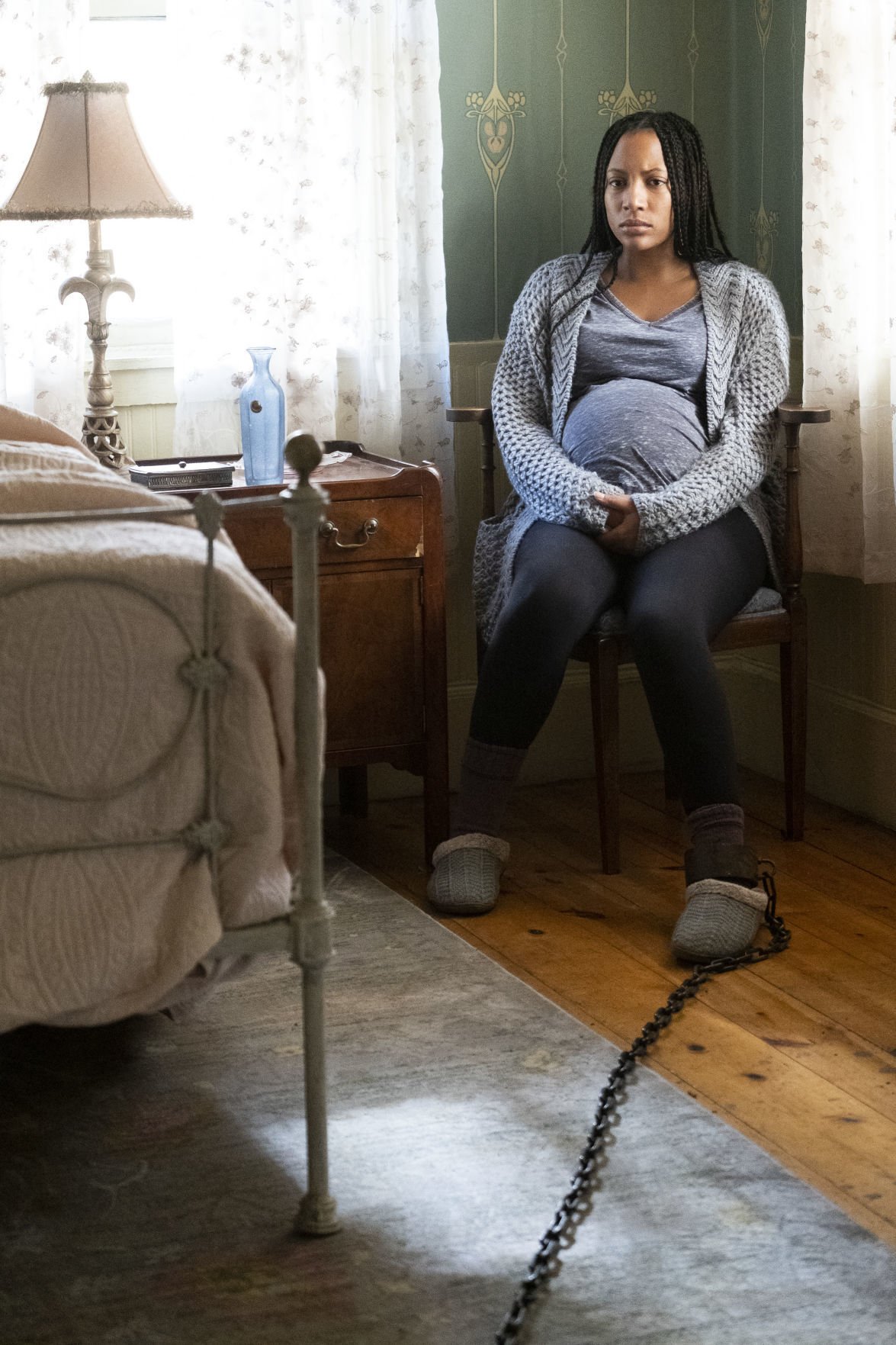 Natalie Paul stars as an anxious expectant mother in "Delivered," the latest installment of the Hulu/Blumhouseanthology series, Into the Dark. Photo courtesy of Hulu/Blumhouse productions. 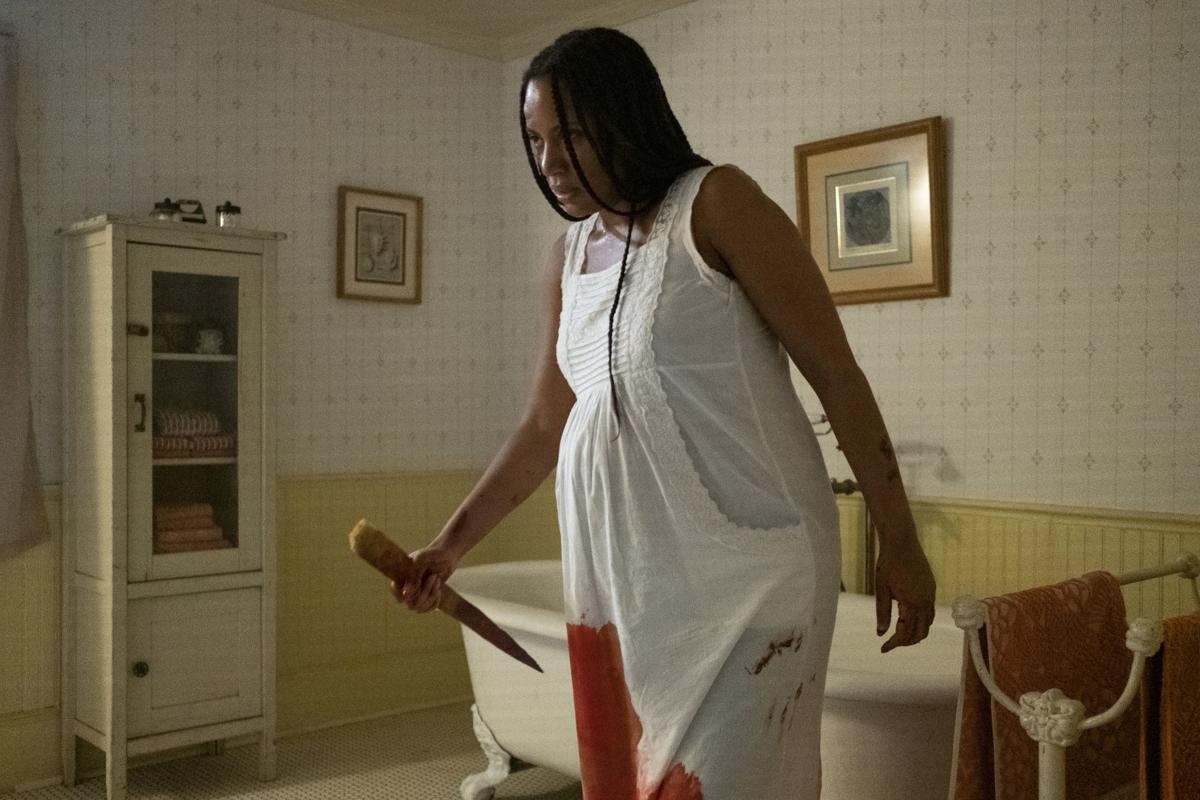 Natalie Paul stars as an anxious expectant mother in "Delivered," the latest installment of the Hulu/Blumhouseanthology series, Into the Dark. Photo courtesy of Hulu/Blumhouse productions.

Pregnancy is a blessing, no doubt. However, a lot of mental gymnastics happen before a parent holds their child for the first time. The list of anxieties associated with welcoming life seems endless. Perhaps that’s why so many movies have been made about it. It can be a scary process. But when you add in variables like mutations, new species, or cannibalism, suddenly you have horror fodder for days about the stranger within.

Hulu and Blumhouse Productions’ Into the Dark channels the terrifying nature of pregnancy with "Delivered," a horror anthology series entry starring Natalie Paul (Netflix's You) and Tina Majorino (Napoleon Dynamite). Directed by Emma Tammi, the installment is pegged to Mother's Day and follows the story of an expecting woman. The joys of pregnancy are abruptly swept up into a Misery-like affair when the woman realizes someone close to her has sinister plans for her and her baby.

Tammi's previous outing, 2018's The Wind, makes an exceptional companion piece with "Delivered." Both works deal with the emotional effects of pregnancy. However, the common thread between the films wasn’t a planned stitch on Tammi’s part.

“It was not lost on me that [The Wind and ‘Delivered’] have some similar themes. Part of that is a coincidence, to be honest,” Tammi said when we rang her up to discuss her latest project. “I think The Wind had some themes that Blumhouse might have seen as a framework for what ‘Delivered’ embodies. I think the throughline for me on both of those were the lead female characters who are going through inner turmoil that they did not feel comfortable expressing to the outer world. They are grappling with things below the surface that are eating at them.”

In ‘Delivered,’ Paul’s character, Valerie, meets fellow mother-to-be Jenny (Majorino) at a crunchy yoga class, fittingly called "Mamaste." Valerie hasn’t been feeling well and has nightmares about the day her child will enter the world, including one involving her baby bursting out of her belly like it’s aboard the Nostromo from Alien. (The imagery doesn’t play it gently, either.) The root cause may be the fear of giving birth, but shame and fear also seem to be present for something located in Valerie's rearview.

That mental weight shows best when the perky Jenny asks Valerie about what she looks forward to the most. She replies: not vomiting so much, getting back to work and getting her body back in shape. Hopefully, the mention of the baby is somewhere near the top, but it likely isn’t.

“Both of the central characters in my films are in the wake of trying to present an outwardly happy, helpful and hopeful person when they may not necessarily feel all those things or are battling depression, insecurity, and loneliness. Those things are universally relevant and relatable. I think both of the stories tap into that with strong female characters who are complicated, vulnerable and flawed. The theme of pregnancy is a subject matter that I'm drawn to, in a symbolic, cyclical life kind of way,” Tammi said.

The Wind is a supernatural horror film set in the 1800s about a plainswoman living in an isolated cabin. With her husband gone for weeks at a time, the woman is left battling against prairie madness and the repercussions of a failed pregnancy. Between both The Wind and “Delivered,” it’s rare to see films that thoroughly showcase what occupies a mother’s head space in such vivid detail. How Tammi illustrates the concept is a haunting vision.

“The Wind has elements of postpartum depression and flashbacks of pregnancy, but ‘Delivered’ is wholly focused on pregnancy. For me, it was talking to a lot of friends and family who have been through the experience,” Tammi said – before adding that she reached out to the writer of The Wind, Teresa Sutherland, for further guidance. “As someone who has not had children yet, I’m continually consulting with people who have been through it first-hand. What I can relate to is the idea and fear around becoming a mom. The characters have yet to become parents.”

The script for “Delivered,” written by Dirk Blackman (Underworld: Rise of the Lycans), revealed many personal truths to Tammi. To the filmmaker, the idea of bringing life into the world is a powerful and enticing act that has its flares of horror. As soon as the miracle of life arrives, that fear of something harming the child comes flooding in.

“The film brings up a lot of the fear and anxieties that people who haven’t had kids yet can relate to because it’s about the anticipation,” Tammi said.

How Tammi breaks ground in her filmmaking technique is how she amplifies the sounds that inhabit the atmosphere she creates. Even when “Delivered” doesn’t populate the screen with frightening imagery, the audible components create a constant feeling of unease, which further deepens our understanding of Valerie’s state of mind. Whether it’s the espresso machine at a local coffee shop or a car door slamming, the feeling of being on edge remains strong.

“I’ve always recognized sound, particularly in a genre space, as being the most impactful thing that gets me,” Tammi declared. “I will find myself, especially in a theater setting, watching a film with scares, and I’m almost certain that I could be closing my eyes and still have a physical reaction if the sound design is right.”

Tammi drew attention to the reality of scary movies if you were to watch them on mute, a practice that horror filmmakers know too well during the editing phase.

“When you watch those movies on mute, as scary and horrifying as the image may be, you don’t get that in your gut jumpscare without sound. I am so passionate about it, regardless of whether it’s a genre work or not. It does the heavy lifting in terms of really getting the audience there,” Tammi said.

Large portions of ‘Delivered’ are quiet. The sounds you hear keep the audience tuned into the narrative frequency, even when the dialogue moves to the backseat. This allows the viewer to immerse themselves in the character’s experience entirely.

“Hearing elements of the space helps the location come alive. But what’s interesting about this experience was that [because of COVID-19 restrictions] the film had to be mixed remotely. The sound designers and mixers had to set up new technology to get this done. We all spent a lot of time on it so we could get it right,” Tammi said.

When you’re working with material that involves possible trauma and mental health issues, worry could arise about doing it justice. It’s tricky territory to bring nuance to because, to those unfamiliar, certain reactions could be seen as extreme. However, it’s difficult to gauge what would be an honest reaction in such an emotionally devastating situation.

“You have to go in a little fearlessly to make anything. I didn’t overthink it in that regard,” Tammi said. “But I did have moments on set, as did our cast, where we were hit with the darker elements of the film. On the one hand, that felt good because it meant we were doing the material justice, but it’s a lot to carry as well. We tried to talk about it and cope with it in healthy ways.”

Tammi’s film homes in on the real terror that surrounds a pregnancy, including the battle women face with themselves when a growing person inside them hijacks their bodies. The world demands that mothers think, feel, and behave in a prescribed fashion. “Delivered” is a scary story for the frustrated soon-to-be mom who needs to be seen.

“Delivered” is now available to stream on Hulu as part of Into the Dark. It's rated TV-MA and is about 90 minutes.