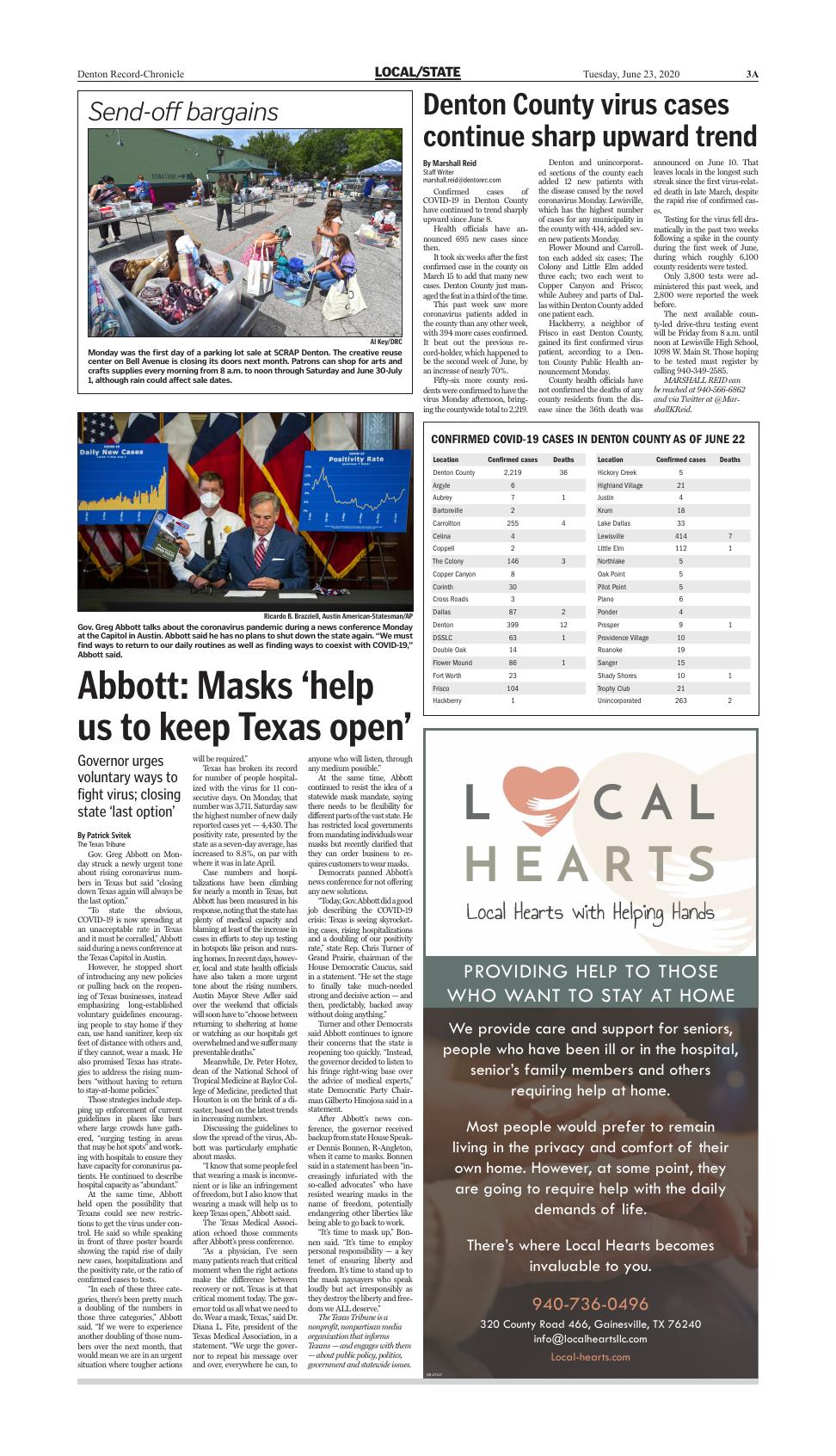 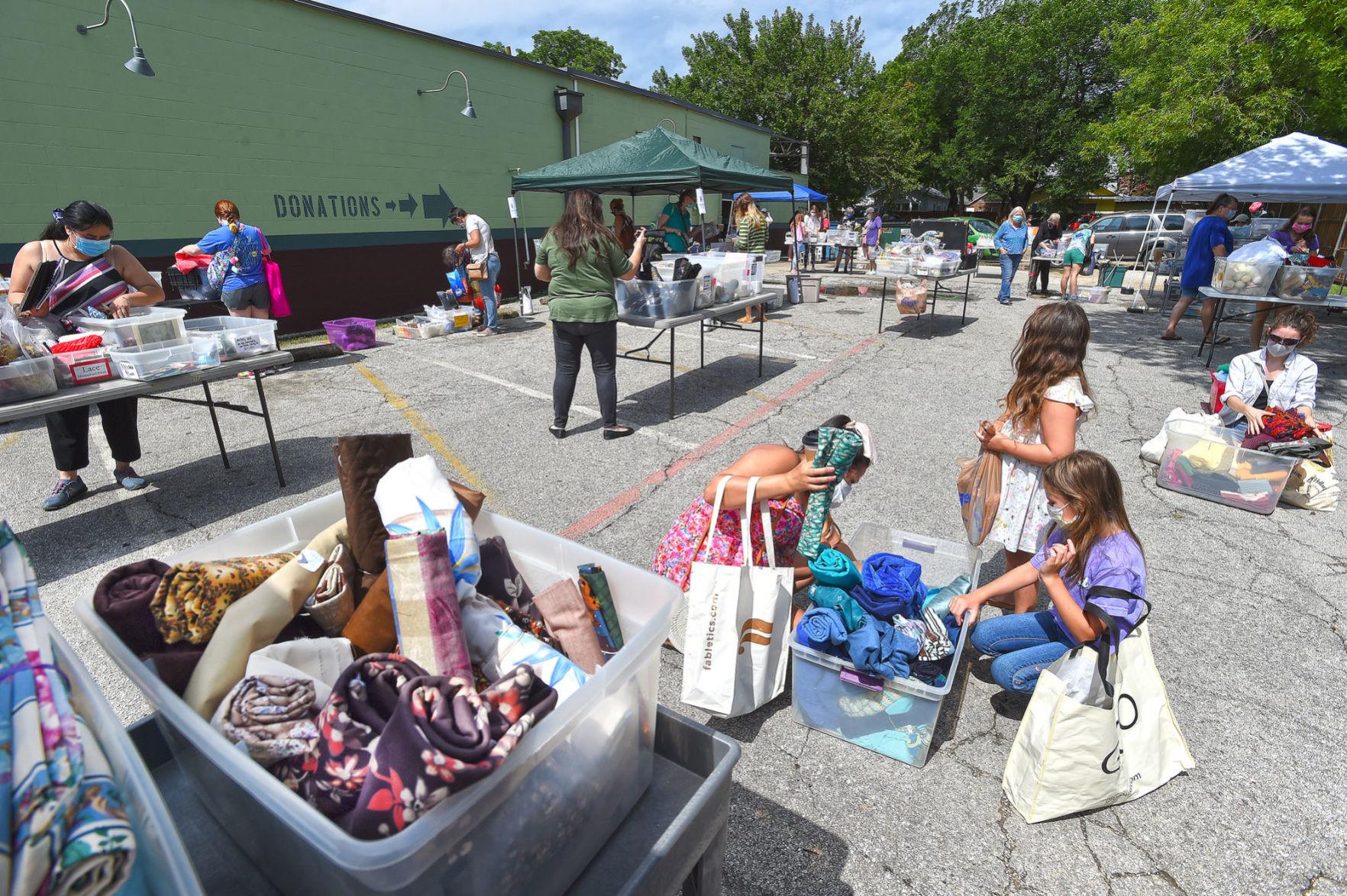 Monday was the first day of a parking lot sale at SCRAP Denton. The creative reuse center on Bell Avenue is closing its doors next month. Patrons can shop for arts and crafts supplies every morning from 8 a.m. to noon through Saturday and June 30-July 1, although rain could affect sale dates.

Gov. Greg Abbott talks about the coronavirus pandemic during a news conference Monday at the Capitol in Austin. Abbott said he has no plans to shut down the state again. “We must find ways to return to our daily routines as well as finding ways to coexist with COVID-19,” Abbott said.

Gov. Greg Abbott on Monday struck a newly urgent tone about rising coronavirus numbers in Texas but said “closing down Texas again will always be the last option.”

“To state the obvious, COVID-19 is now spreading at an unacceptable rate in Texas and it must be corralled,” Abbott said during a news conference at the Texas Capitol in Austin.

However, he stopped short of introducing any new policies or pulling back on the reopening of Texas businesses, instead emphasizing long-established voluntary guidelines encouraging people to stay home if they can, use hand sanitizer, keep six feet of distance with others and, if they cannot, wear a mask. He also promised Texas has strategies to address the rising numbers “without having to return to stay-at-home policies.”

Those strategies include stepping up enforcement of current guidelines in places like bars where large crowds have gathered, “surging testing in areas that may be hot spots” and working with hospitals to ensure they have capacity for coronavirus patients. He continued to describe hospital capacity as “abundant.”

At the same time, Abbott held open the possibility that Texans could see new restrictions to get the virus under control. He said so while speaking in front of three poster boards showing the rapid rise of daily new cases, hospitalizations and the positivity rate, or the ratio of confirmed cases to tests.

Texas has broken its record for number of people hospitalized with the virus for 11 consecutive days. On Monday, that number was 3,711. Saturday saw the highest number of new daily reported cases yet — 4,430. The positivity rate, presented by the state as a seven-day average, has increased to 8.8%, on par with where it was in late April.

Case numbers and hospitalizations have been climbing for nearly a month in Texas, but Abbott has been measured in his response, noting that the state has plenty of medical capacity and blaming at least of the increase in cases in efforts to step up testing in hotspots like prison and nursing homes. In recent days, however, local and state health officials have also taken a more urgent tone about the rising numbers. Austin Mayor Steve Adler said over the weekend that officials will soon have to “choose between returning to sheltering at home or watching as our hospitals get overwhelmed and we suffer many preventable deaths.”

Meanwhile, Dr. Peter Hotez, dean of the National School of Tropical Medicine at Baylor College of Medicine, predicted that Houston is on the brink of a disaster, based on the latest trends in increasing numbers.

Discussing the guidelines to slow the spread of the virus, Abbott was particularly emphatic about masks.

“As a physician, I’ve seen many patients reach that critical moment when the right actions make the difference between recovery or not. Texas is at that critical moment today. The governor told us all what we need to do. Wear a mask, Texas,” said Dr. Diana L. Fite, president of the Texas Medical Association, in a statement. “We urge the governor to repeat his message over and over, everywhere he can, to anyone who will listen, through any medium possible.”

At the same time, Abbott continued to resist the idea of a statewide mask mandate, saying there needs to be flexibility for different parts of the vast state. He has restricted local governments from mandating individuals wear masks but recently clarified that they can order business to requires customers to wear masks.

“Today, Gov. Abbott did a good job describing the COVID-19 crisis: Texas is seeing skyrocketing cases, rising hospitalizations and a doubling of our positivity rate,” state Rep. Chris Turner of Grand Prairie, chairman of the House Democratic Caucus, said in a statement. “He set the stage to finally take much-needed strong and decisive action — and then, predictably, backed away without doing anything.”

Turner and other Democrats said Abbott continues to ignore their concerns that the state is reopening too quickly. “Instead, the governor decided to listen to his fringe right-wing base over the advice of medical experts,” state Democratic Party Chairman Gilberto Hinojosa said in a statement.

After Abbott’s news conference, the governor received backup from state House Speaker Dennis Bonnen, R-Angleton, when it came to masks. Bonnen said in a statement has been “increasingly infuriated with the so-called advocates” who have resisted wearing masks in the name of freedom, potentially endangering other liberties like being able to go back to work.

A nurse uses a swab to perform a coronavirus test in Salt Lake City.

Confirmed cases of COVID-19 in Denton County have continued to trend sharply upward since June 8.

Health officials have announced 695 new cases since then.

It took six weeks after the first confirmed case in the county on March 15 to add that many new cases. Denton County just managed the feat in a third of the time.

This past week saw more coronavirus patients added in the county than any other week, with 394 more cases confirmed. It beat out the previous record-holder, which happened to be the second week of June, by an increase of nearly 70%.

Fifty-six more county residents were confirmed to have the virus Monday afternoon, bringing the countywide total to 2,219.

Denton and unincorporated sections of the county each added 12 new patients with the disease caused by the novel coronavirus Monday. Lewisville, which has the highest number of cases for any municipality in the county with 414, added seven new patients Monday.

Flower Mound and Carrollton each added six cases; The Colony and Little Elm added three each; two each went to Copper Canyon and Frisco; while Aubrey and parts of Dallas within Denton County added one patient each.

County health officials have not confirmed the deaths of any county residents from the disease since the 36th death was announced on June 10. That leaves locals in the longest such streak since the first virus-related death in late March, despite the rapid rise of confirmed cases.

Testing for the virus fell dramatically in the past two weeks following a spike in the county during the first week of June, during which roughly 6,100 county residents were tested.

Only 3,800 tests were administered this past week, and 2,800 were reported the week before.

The next available county-led drive-thru testing event will be Friday from 8 a.m. until noon at Lewisville High School, 1098 W. Main St. Those hoping to be tested must register by calling 940-349-2585. 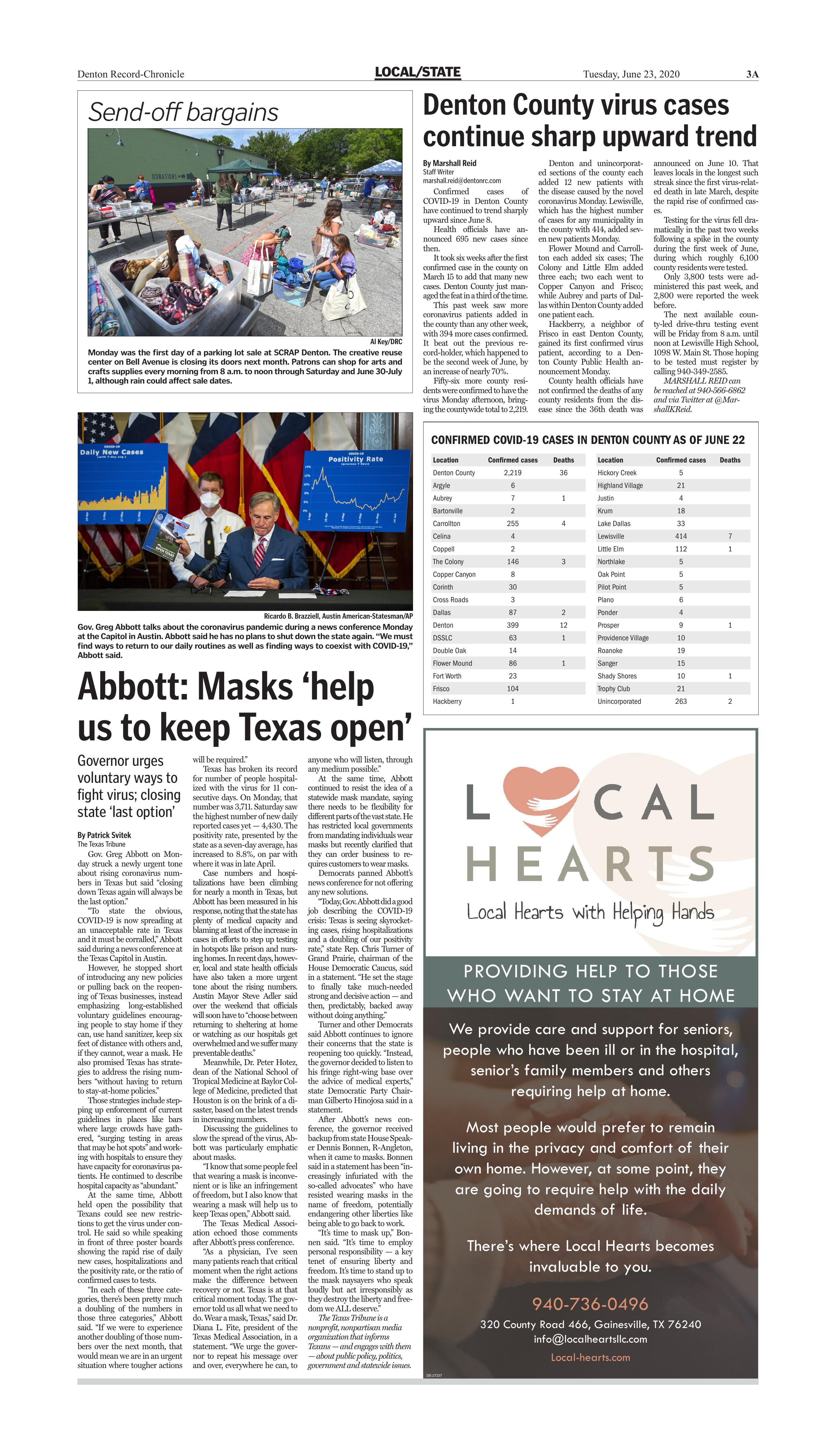