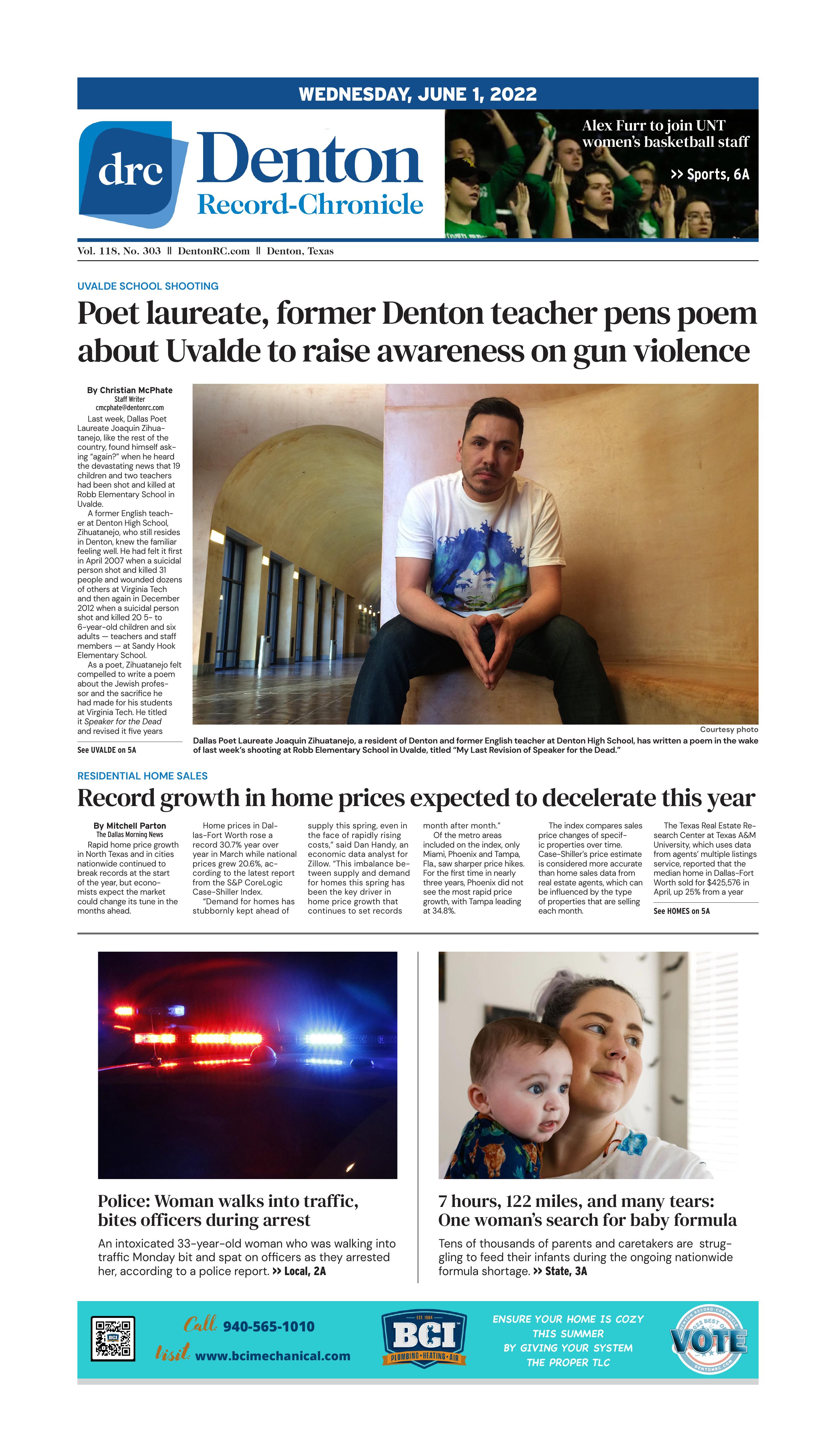 Dallas Poet Laureate Joaquin Zihuatanejo, a resident of Denton and former English teacher at Denton High School, has written a poem in the wake of last week’s shooting at Robb Elementary School in Uvalde, titled “My Last Revision of Speaker for the Dead.”

Last week, Dallas Poet Laureate Joaquin Zihuatanejo, like the rest of the country, found himself asking “again?” when he heard the devastating news that 19 children and two teachers had been shot and killed at Robb Elementary School in Uvalde.

A former English teacher at Denton High School, Zihuatanejo, who still resides in Denton, knew the familiar feeling well. He had felt it first in April 2007 when a suicidal person shot and killed 31 people and wounded dozens of others at Virginia Tech and then again in December 2012 when a suicidal person shot and killed 20 5- to 6-year-old children and six adults — teachers and staff members — at Sandy Hook Elementary School.

As a poet, Zihuatanejo felt compelled to write a poem about the Jewish professor and the sacrifice he had made for his students at Virginia Tech. He titled it Speaker for the Dead and revised it five years later when Sandy Hook happened, adding details from that horrid event and retitling it A Revision of Speaker for the Dead.

“I’m a state-certified public high school teacher,” Zihuatanejo said Monday morning. “Teaching is something sacred. I’m also a father. I have two daughters, and when something like that happens, you think about your daughter. My daughters were in public school, … a place for a day where no harm comes to them. School is like a sanctuary.”

When this sanctuary was violated again on Tuesday, May 24, Zihuatanejo began revising his poem again, in an attempt to capture the lives those 19 children should have lived if a suicidal person hadn’t been able to transfer military-style rifles with 30-round clips to a local gun dealer and pick them up shortly after he turned 18.

“When this one happened in Uvalde, I just shattered,” Zihuatanejo said. “… When I saw those little faces, a lot of them looked like my brother’s daughters today and my daughters when they were that age. I could not, not do something.”

He retitled the poem My Last Revision of Speaker for the Dead in hopes it never happens again, that this time representatives hear them and make a change with commonsense gun laws. He shared it on his Facebook page. It then appeared as a post in the Facebook group Pantsuit Nation x Supermajority, a 2.9 million member group dedicated to building the foundation for a more equitable and engaged democracy.

“It just shatters me trying to take something so impossibly dark and tragic and find some poetry inside, trying to find the light inside it,” he said. “… Sometimes my way of words feels useless. I can’t write these young people back to life.”

Since he shared the poem on Sunday, it has received thousands of likes and hundreds of comments. He has agreed to share it with Record-Chronicle readers.

My Last Revision of Speaker for the Dead

Imagine them. In the end. Now imagine. One is yours.

Let this be more than words I recite

Let the dark give way to the Light

Let this be freeze tag

Let the gunman turn around

No roses blossom on a child’s chest

Let this be more than metaphor

Let this be sacred

Move this from elegy to exaltation

From song to chant

I want to scream you back to life

Little ones more akin to God than men

Still reverberate in my head

To be their speaker for the dead

So this is not poem

This is act of desperation

On the glowing embers of your ashes

Hoping, praying that your spirits will rise

While the simple question of,

how could this happen again, blends into

How do I find the poetry in gunshots and lost lives?

So let night be day

Let this page be your life

Let the ink be your blood

I want you to hear me

I want to write you back from death

Let this be transubstantiation

I pat my hearts three times

Believe in the miracle

Though there is none to witness

Desperate to write the smallest semblance of light

In the middle of all this goddamn night

I close my eyes

Wait for an image to move the pen

And I see my daughters’ hands at age 10

But that’s just the poet in me talking again

And this cannot be about poetry

Because this is about youth

This is about an awful truth

And the truth is

And then the poet in me rears its hopeful pen again

And we see Alexandria at 10

And Alithia forgets the combination to her middle school locker again

Ellie’s purple quinceañera dress flows behind her as she dances

Eliahana closes out her senior softball season by striking out 10

Jackie gets accepted into Duke University

Maite pays off her home in Uvalde after only 16 years

When Xavier heard the news all he could do was

And this is where the poem ends

Right where it begins

19 new stars in the night sky

With the same question we were left with last time

State
Is this the end of record home price growth?
Price gains are anticipated to decelerate later in the year
Vernon Bryant/The Dallas Morning News

Home prices in Dallas-Fort Worth rose a record 30.7% year over year in March, according to the latest report from the S&P CoreLogic Case-Shiller Index.

Rapid home price growth in North Texas and in cities nationwide continued to break records at the start of the year, but economists expect the market could change its tune in the months ahead.

Home prices in Dallas-Fort Worth rose a record 30.7% year over year in March while national prices grew 20.6%, according to the latest report from the S&P CoreLogic Case-Shiller Index.

“Demand for homes has stubbornly kept ahead of supply this spring, even in the face of rapidly rising costs,” said Dan Handy, an economic data analyst for Zillow. “This imbalance between supply and demand for homes this spring has been the key driver in home price growth that continues to set records month after month.”

Of the metro areas included on the index, only Miami, Phoenix and Tampa, Fla., saw sharper price hikes. For the first time in nearly three years, Phoenix did not see the most rapid price growth, with Tampa leading at 34.8%.

The index compares sales price changes of specific properties over time. Case-Shiller’s price estimate is considered more accurate than home sales data from real estate agents, which can be influenced by the type of properties that are selling each month.

The Texas Real Estate Research Center at Texas A&M University, which uses data from agents’ multiple listings service, reported that the median home in Dallas-Fort Worth sold for $425,576 in April, up 25% from a year prior.

Selma Hepp, CoreLogic’s deputy chief economist, said the first quarter saw “some of the most competitive housing market conditions since the onset of the pandemic” as buyers rushed in ahead of the surge in mortgage rates that dramatically affected monthly payments.

Economists predict the rapid price growth could finally begin to slow in the coming months as buyer demand is softened by affordability challenges.

“Mortgage costs are more than 50% higher than they were a year ago, and prospective buyers will likely start to rethink what they can afford,” Handy said. “Sellers may already be responding, with the rate of price cuts now on the rise, to meet buyers where they are. Price growth will likely begin to come back towards earth as many buyers are priced out and inventory rises.”

Dallas-Fort Worth home showings were down 9% year over year in April and 11% since March, according to ShowingTime.

“Mortgages are becoming more expensive as the Federal Reserve has begun to ratchet up interest rates, suggesting that the macroeconomic environment may not support extraordinary home price growth for much longer,” Craig Lazzara, managing director of S&P Dow Jones Indices, said in a statement. “Although one can safely predict that price gains will begin to decelerate, the timing of the deceleration is a more difficult call.”