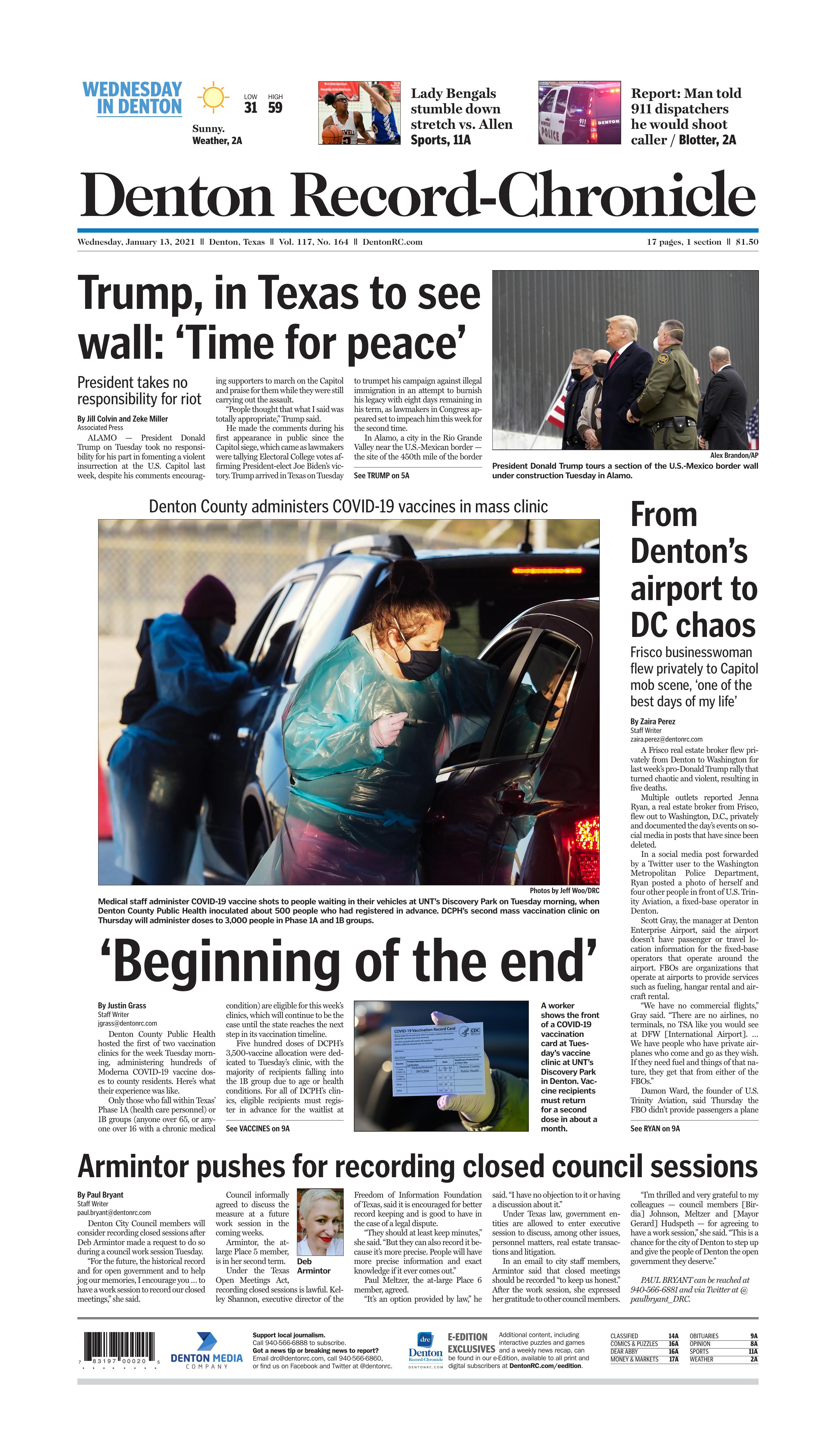 Denton County Public Health hosted the first of two vaccination clinics for the week Tuesday morning, administering hundreds of Moderna COVID-19 vaccine doses to county residents. Here’s what their experience was like.

Only those who fall within Texas’ Phase 1A (health care personnel) or 1B groups (anyone over 65, or anyone over 16 with a chronic medical condition) are eligible for this week’s clinics, which will continue to be the case until the state reaches the next step in its vaccination timeline.

Five hundred doses of DCPH’s 3,500-vaccine allocation were dedicated to Tuesday’s clinic, with the majority of recipients falling into the 1B group due to age or health conditions. For all of DCPH’s clinics, eligible recipients must register in advance for the waitlist at dentoncounty.gov/covid19vaccine and arrive at their scheduled appointment.

At Tuesday’s drive-thru clinic, held at the University of North Texas’ Discovery Park, residents remained in their vehicles as they were directed through multiple stations. Those included a check-in, the vaccine tent where nurses administered the shot, and tables where recipients were given a card providing a vaccination record and letting them know when they will need to attend another clinic for their second dose. 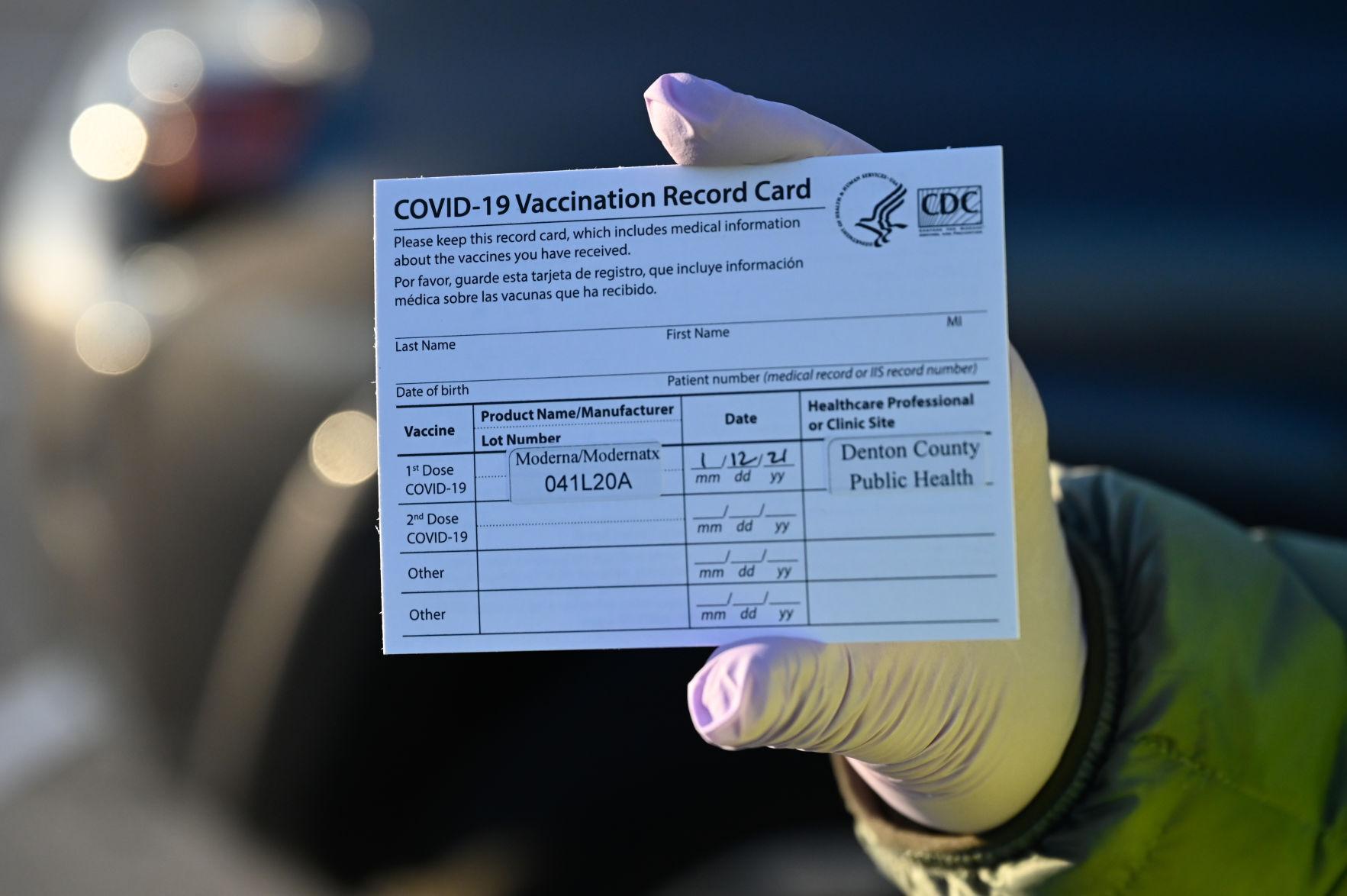 A worker shows the front of a COVID-19 vaccination card at Tuesday’s vaccine clinic at UNT’s Discovery Park in Denton. Vaccine recipients must return for a second dose in about a month.

After receiving their card, recipients parked and waited to ensure they didn’t have a reaction to the shot before leaving. The entire process took between 30 and 45 minutes — and even less in some cases.

DCPH spokesperson Jennifer Rainey said Monday that Tuesday’s clinic would serve as somewhat of a test for Thursday’s clinic, when the remaining 3,000 vaccines from the week’s allocation will be administered. Though on a smaller scale, Tuesday’s clinic appeared to pass that test, as staff and volunteers had vaccinated around 300 people a little after an hour into the event, which ran from 7:30 a.m. to noon.

Much of that efficiency was due to recipients arriving early, as nurses started vaccinating before the 7:30 start time. However, Rainey strongly recommended that recipients arrive at their scheduled time slots, as a large number of people showing up early could cause congestion issues with larger-scale clinics like Thursday’s.

Tuesday was a success for the vaccine recipients as well, many of whom had been awaiting it for months. While maximum protection from the coronavirus doesn’t come until after the second dose is received — and even then, officials recommend continued distancing, facial coverings and hand-washing — those who were given the shot said they were relieved the wait was finally over.

Bobby Martin, a resident who falls under the Phase 1B group due to his age, said getting the vaccine is the first step in loosening up some of the restrictions he has followed throughout the pandemic.

“It was very organized and thorough,” Martin said. “For me, it was a relief. This is the beginning of releasing those restrictions for me.” 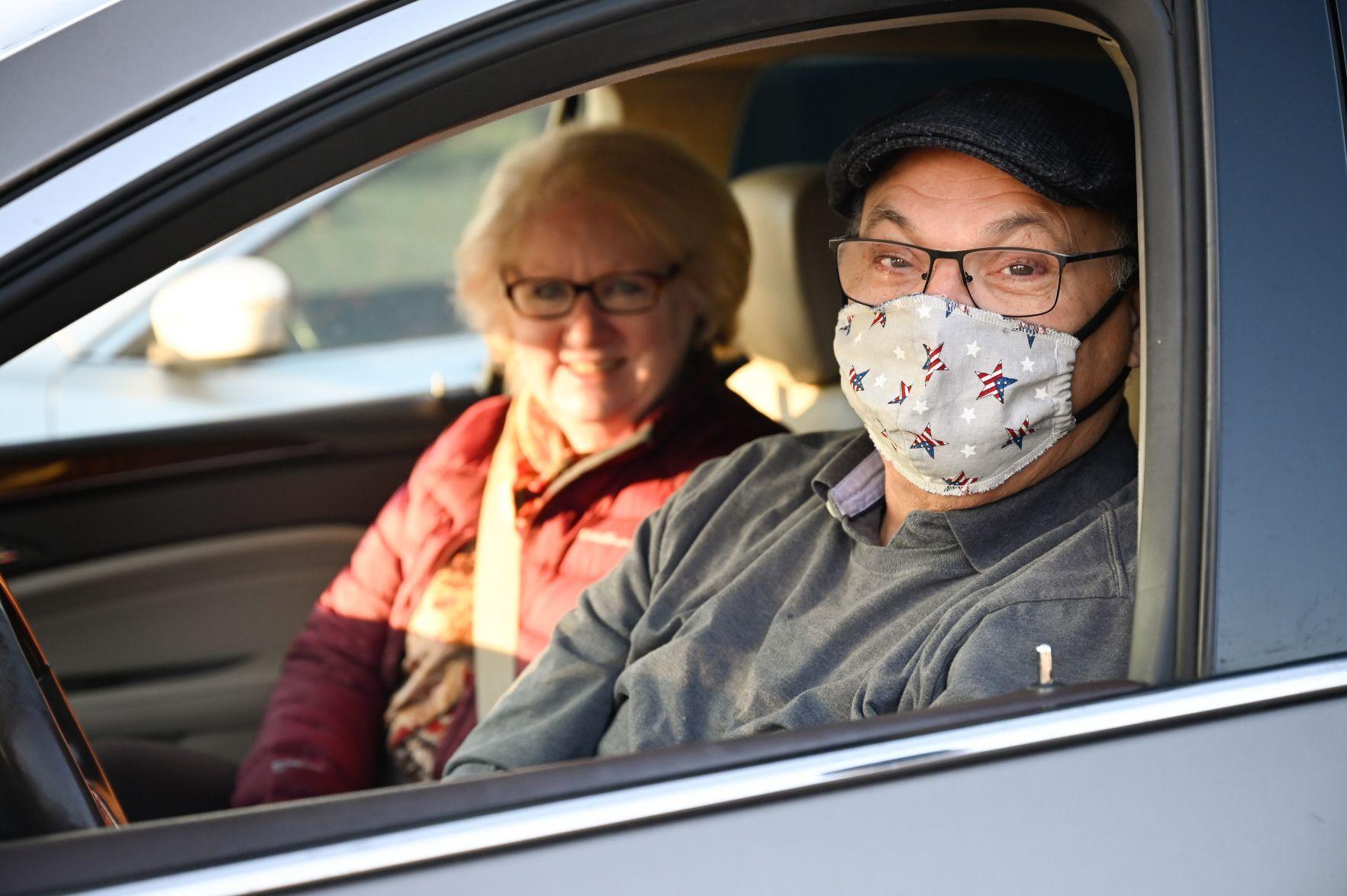 After receiving a COVID-19 vaccination, recipients must be monitored by medical staff in case of any adverse reactions. Bobby Martin, right, waits in his car after his shot Tuesday at UNT’s Discovery Park. “It was very organized and thorough,” Martin said of DCPH’s drive-thru vaccine clinic.

Patt Bowles, another resident whose age places her in the 1B group, said she was pleased with DCPH’s adjustments after the county’s initial phone-based registration system failed to keep up with call volume.

“The very first time it became available, it was frustrating,” Bowles said of the phone system. “The web sign-up was very easy and clear, with really good communication.”

Bowles, who trains workers at such places as hospitals and schools to use emergency management systems, said the vaccine will give her peace of mind when entering high-risk areas.

Denton County Judge Andy Eads and DCPH Director Matt Richardson addressed media shortly after the clinic began, with Richardson saying the vaccinations are a vital step in ending the pandemic for good.

“This is an important day and the beginning of the end of a pandemic — here locally, statewide and in the nation,” Richardson said. “We’re going to administer as many as we can as often as we can, based on availability of vaccine.” 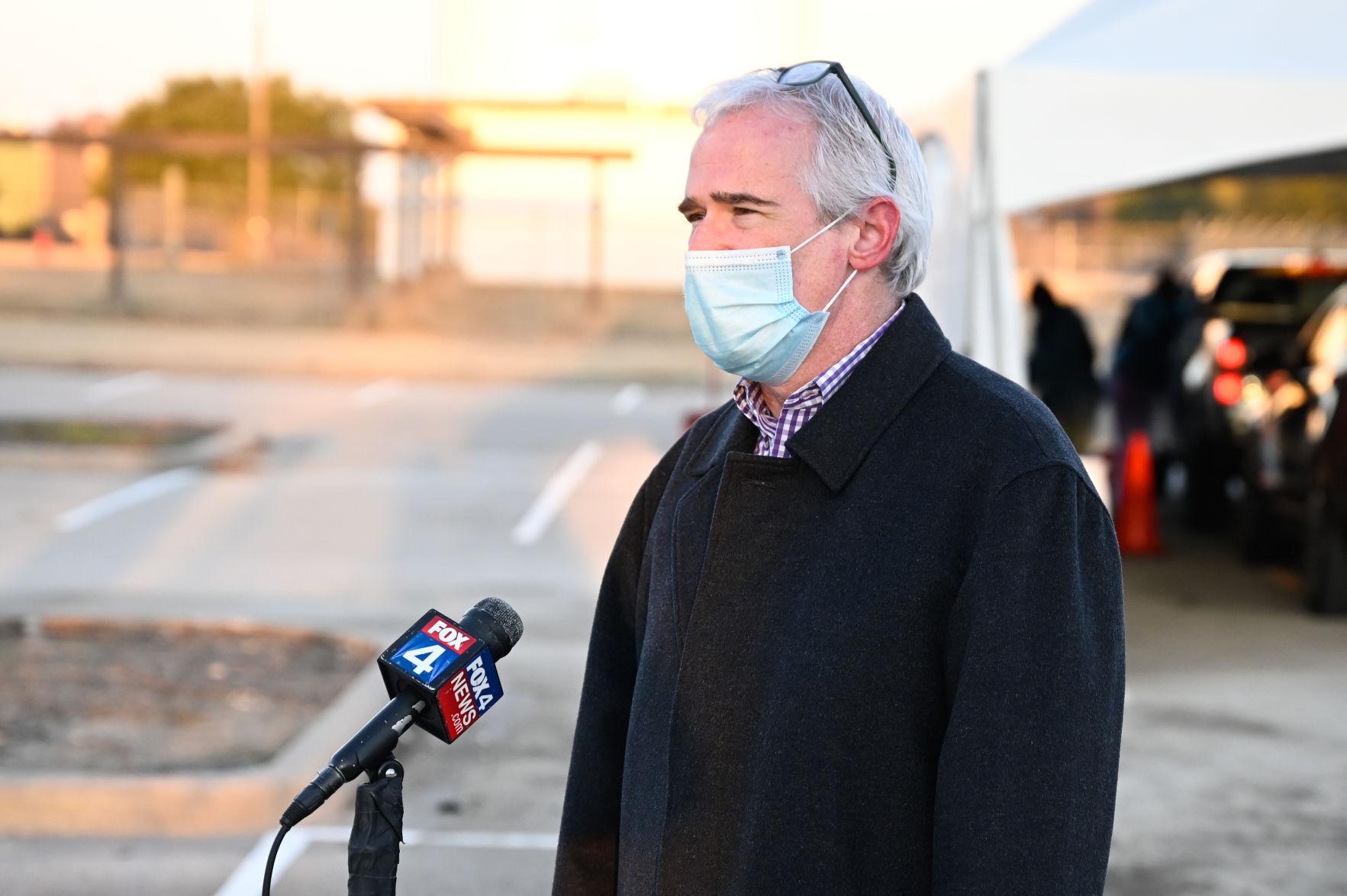 Denton County Public Health Director Matt Richardson speaks to the media during a mass vaccination clinic Tuesday morning at the University of North Texas’ Discovery Park. “We anticipate that if we had enough vaccine, we could do even larger clinics more often,” he said.

Richardson said DCPH doesn’t know yet how large a scale it could push its clinics to, but that it could be much larger than even Thursday’s 3,000-vaccine clinic at C.H. Collins Athletic Complex, which he added will be another test for the department.

“We’re not sure what the ceiling is,” Richardson said. “We anticipate that if we had enough vaccine, we could do even larger clinics more often.”

Later in the morning, as the clinic continued, Richardson addressed the public during his weekly COVID-19 presentation at the Denton County Commissioners Court meeting. While the arrival and administration of vaccines has been an important step, he made it clear that precautions such as social distancing and face coverings must still be used as cases continue to rise, with the county reporting 13,367 active cases as of Monday afternoon.

“While we are all collectively fatigued, they [masks and social distancing] couldn’t be more important than they are this week,” Richardson said. “It is, in fact, a tipping point for COVID-19 transmission. We need to do all we can to prevent further transmission.”

With the start of vaccine clinics, the county’s coronavirus testing webpage changed Tuesday to note that “DCPH is no longer offering COVID-19 testing, as DCPH is now a mass vaccination hub.”

Denton City Council members will consider recording closed sessions after Deb Armintor made a request to do so during a council work session Tuesday.

“For the future, the historical record and for open government and to help jog our memories, I encourage you … to have a work session to record our closed meetings,” she said.

Council informally agreed to discuss the measure at a future work session in the coming weeks.

Armintor, the at-large Place 5 member, is in her second term.

Under the Texas Open Meetings Act, recording closed sessions is lawful. Kelley Shannon, executive director of the Freedom of Information Foundation of Texas, said it is encouraged for better record keeping and is good to have in the case of a legal dispute.

“They should at least keep minutes,” she said. “But they can also record it because it’s more precise. People will have more precise information and exact knowledge if it ever comes out.”

“It’s an option provided by law,” he said. “I have no objection to it or having a discussion about it.”

Under Texas law, government entities are allowed to enter executive session to discuss, among other issues, personnel matters, real estate transactions and litigation.

In an email to city staff members, Armintor said that closed meetings should be recorded “to keep us honest.” After the work session, she expressed her gratitude to other council members.

“I’m thrilled and very grateful to my colleagues — council members [Birdia] Johnson, Meltzer and [Mayor Gerard] Hudspeth — for agreeing to have a work session,” she said. “This is a chance for the city of Denton to step up and give the people of Denton the open government they deserve.”

Multiple outlets reported Jenna Ryan, a real estate broker from Frisco, flew out to Washington, D.C., privately and documented the day’s events on social media in posts that have since been deleted.

In a social media post forwarded by a Twitter user to the Washington Metropolitan Police Department, Ryan posted a photo of herself and four other people in front of U.S. Trinity Aviation, a fixed-base operator in Denton.

Scott Gray, the manager at Denton Enterprise Airport, said the airport doesn’t have passenger or travel location information for the fixed-base operators that operate around the airport. FBOs are organizations that operate at airports to provide services such as fueling, hangar rental and aircraft rental.

“We have no commercial flights,” Gray said. “There are no airlines, no terminals, no TSA like you would see at DFW [International Airport]. … We have people who have private airplanes who come and go as they wish. If they need fuel and things of that nature, they get that from either of the FBOs.”

Damon Ward, the founder of U.S. Trinity Aviation, said Thursday the FBO didn’t provide passengers a plane to fly to D.C. for the rally-turned-riot last Wednesday.

“[Private flyers] operate through here, but I mean it’s like going to QuikTrip,” Ward said. “People buy fuel, and you don’t know what they do.”

In a public statement on Facebook and Twitter, Ryan said she “doesn’t condone the violence” that followed the Trump rally in which he told supporters to go to the Capitol building.

“I was invited to go to Washington D.C. by a friend to witness the march,” she said in the statement. “Unfortunately, what I believed to be a peaceful political march turned into a violent protest. I do not condone the violence that occurred on January 6, 2020 and I am truly heartbroken for the people who have lost their lives.”

Screenshots of now-deleted social media posts show Ryan announcing she and other attendees “just stormed the Capital,” noting it was “one of the best days of my life.”

Here is a local Frisco, TX resident, celebrating yesterday’s Insurrection as one of the best days of her life, after storming the Capitol! Her name is Jenna Ryan! Her Twitter handle is in the pictures below! https://t.co/12C93BW1rU pic.twitter.com/r5WVvMpG9W

Ryan is among other North Texans who went to the Capitol on Jan. 6. While she told Spectrum News she didn’t actually enter the building, she added she may have placed a foot inside the building.

Steven D’Antuono, the head of the FBI’s Washington Field Office, said in a news conference Tuesday the agency has received more than 100,000 pieces of digital media related to the riot at the Capitol on Jan. 6, and agents would identify and pursue those who committed a crime at the Capitol that day.