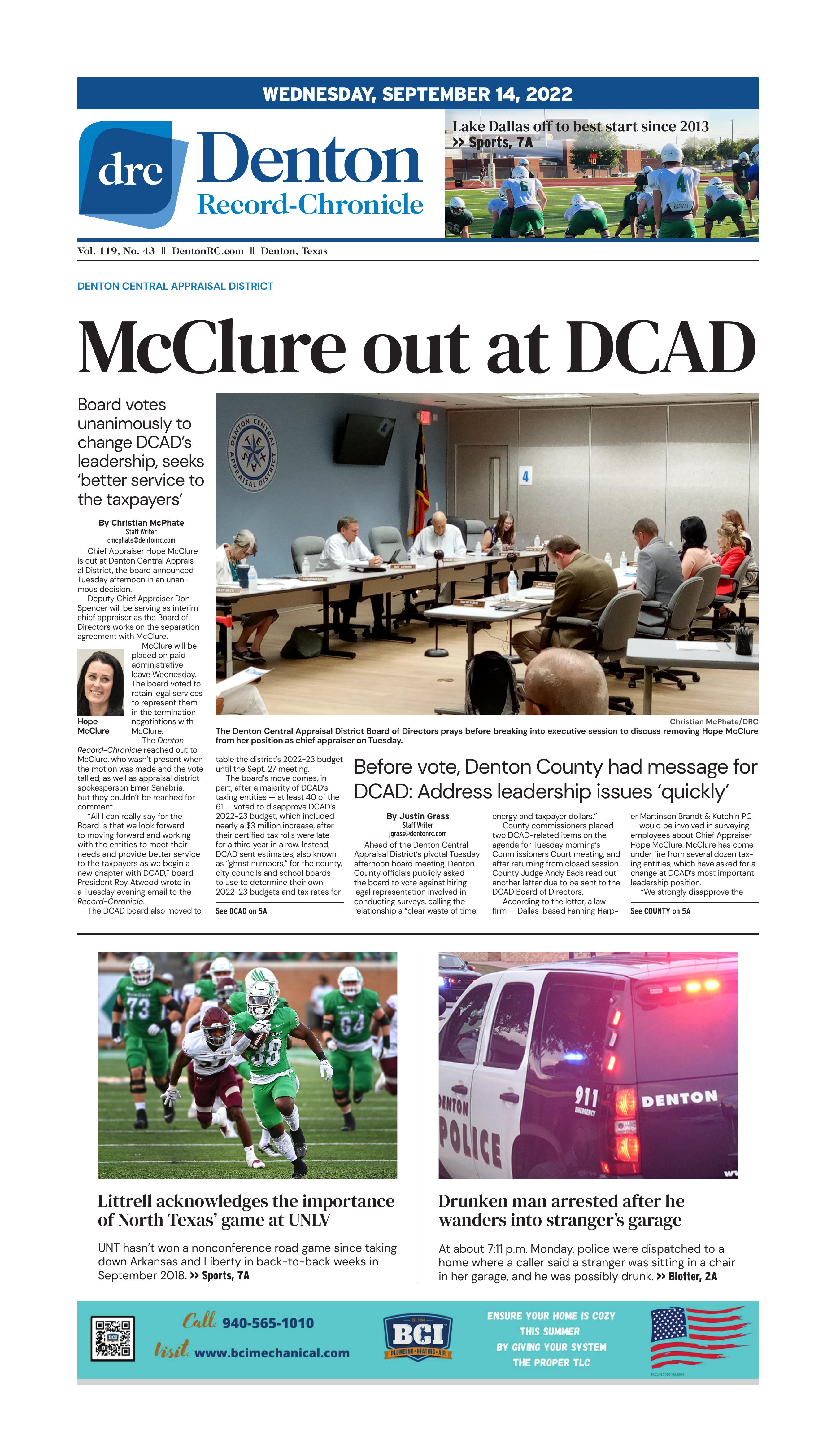 The Denton Central Appraisal District Board of Directors prays before breaking into executive session to discuss removing Hope McClure from her position as chief appraiser on Tuesday.

Members of the Denton Central Appraisal District Board of Directors pray at the start of their meeting Tuesday in Denton.

Chief Appraiser Hope McClure is out at Denton Central Appraisal District, the board announced Tuesday afternoon in an unanimous decision.

Deputy Chief Appraiser Don Spencer will be serving as interim chief appraiser as the Board of Directors works on the separation agreement with McClure. 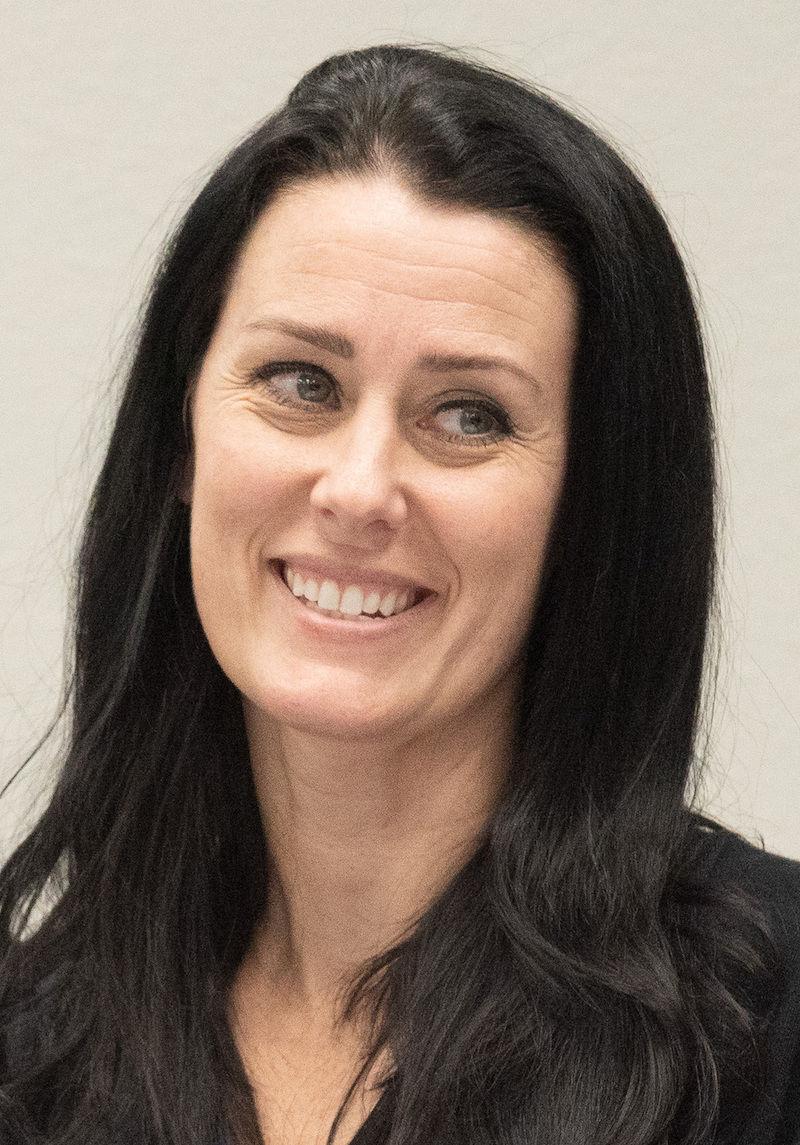 McClure will be placed on paid administrative leave Wednesday. The board voted to retain legal services to represent them in the termination negotiations with McClure.

The Denton Record-Chronicle reached out to McClure, who wasn’t present when the motion was made and the vote tallied, as well as appraisal district spokesperson Emer Sanabria, but they couldn’t be reached for comment.

“All I can really say for the Board is that we look forward to moving forward and working with the entities to meet their needs and provide better service to the taxpayers as we begin a new chapter with DCAD,” board President Roy Atwood wrote in a Tuesday evening email to the Record-Chronicle.

The DCAD board also moved to table the district’s 2022-23 budget until the Sept. 27 meeting.

The board’s move comes, in part, after a majority of DCAD’s taxing entities — at least 40 of the 61 — voted to disapprove DCAD’s 2022-23 budget, which included nearly a $3 million increase, after their certified tax rolls were late for a third year in a row. Instead, DCAD sent estimates, also known as “ghost numbers,” for the county, city councils and school boards to use to determine their own 2022-23 budgets and tax rates for residents hoping for property tax relief.

Several entities, including the Denton County Commissioners Court, put out statements saying they had lost faith in DCAD leadership.

The majority’s ire has been thundering at public meetings and in news headlines since at least January. On Sunday, The Dallas Morning News published an editorial titled “It’s time for new leadership at Denton appraisal district” that highlighted the latest round of problems for the chief appraiser, McClure, including a series of lawsuits dating back to 2019 and a recent Equal Employment Opportunity Commission discrimination complaint, filed by a Black employee who claimed she’s been passed over for jobs due to her race.

“None of these issues has been settled,” The News wrote in the editorial. “Neither has the complaint against McClure to the Texas Department of Licensing and Regulation or any of the intra-county disputes with taxing agencies who rely on DCAD’s work. But even if every one of those disputes settles in McClure’s favor, the reputational damage is done. Folks in Denton County, including the county Commissioners Court, have lost confidence in the leadership at DCAD.”

For months, McClure has been mounting a defense against her critics.

After Western Valuation and Consulting, led by a central appraisal district veteran, reported finding a toxic work culture at DCAD in its June report for the agency’s Board of Directors, McClure created a 10-page rebuttal and included comments in support of her leadership.

For example, one of those quotes, attributed to the town of Copper Canyon, Jan. 6: “Hope, one thing I have found to be true in public service. Occasionally someone will disagree with you and instead of getting the facts, they choose to attack and discredit. Please be assured, everyone I know with the municipalities have total faith in you and your staff.”

As more taxing entities moved to disapprove the district’s budget, DCAD requested emails or letters of support for McClure to release to the press.

A whistleblower had shared information with media outlets about the appraisal district spokesperson urging a show of support for McClure’s leadership. When the Record-Chronicle reported the request Aug. 19, DCAD’s response was to force employees to sign a nondisclosure agreement, a strange move for a public taxing authority beholden to Texas’ open meeting laws.

Tuesday morning, Denton County commissioners announced they were sending another letter to DCAD’s board about the district hiring a law firm — Dallas-based Fanning Harper Martinson Brandt & Kutchin PC — to help survey employees about McClure and her leadership.

“We strongly disapprove the hiring of a law firm to survey employees and taxing entities on the effectiveness of the current chief appraiser,” Denton County Judge Andy Eads announced during Tuesday’s Commissioners Court meeting. “This action is a clear waste of time, energy and taxpayer dollars. We ask the Denton Central Appraisal District Board of Directors to address the leadership issues at hand quickly, decisively and effectively.”

At the DCAD board meeting Tuesday afternoon, board members went into executive session shortly after the meeting began at 3 p.m. to discuss their plans for McClure. More than two hours passed before they returned from executive session, passed a motion and voted to place McClure on paid administrative leave, retain an attorney to represent the board in termination negotiations with McClure and appoint Spencer as the interim chief appraiser.

Several people showed up for the public comment period after the board’s announcement. A representative from Lewisville ISD thanked the board for their decision.

Flower Mound property owner Mitchell Vexler also made an appearance during the public comment period and gave board members several folders that laid out the “fraud” he alleged was occurring at DCAD. As Vexler told The Dallas Morning News’ editorial board: “They’re just making up numbers.”

Vexler, whose property value soared to 400% in one year, has filed multiple lawsuits against DCAD. On Tuesday, he reiterated what he claimed during the public comment period to the Record-Chronicle as he was leaving the meeting. It’s similar to what he wrote in an open letter to the public and posted on his website:

“After the Deposition of the Corporate Representative and the Deposition of the Chief Appraiser of DCAD it is clear there is a complete disconnect from those running DCAD to the legal requirements under Uniform Standards of Professional Appraisal Practice (USPAP). The disconnect occurs at the staff level, administrative level, computer software provider and Board of Directors. DCAD has failed to ensure that the software used in 2016 through today, meets the requirements of Uniform Standards of Professional Appraisal Practice (USPAP) and further has failed to properly train its staff in the use of the software and allows the staff to manually override the software ‘based on their experience’ as stated by the Corporate Rep.

“How can the staff be taught when the executives running DCAD don’t understand the formulas involved in the software or the requirements of USPAP, Mass Appraisal Standards, and their own licensing body? The entire Board should be replaced with people who understand math and the standards/laws to which DCAD must operate. ...

“As of the writing of this letter, DCAD staff has no clue, no proper mathematical training, and no consistent implementation of the USPAP, TDLR, and TALBC requirements and thus a top to bottom audit and remuneration to the Property Owners as a result of the improper values, is now in order. We lack the confidence, via the history, evidence and research we have acquired, in many levels at DCAD that we will receive a reasonable valuation.”

Vexler told the Record-Chronicle that the appraisal district board will have “bigger problems than they ever imagined” if they allow his lawsuits to enter a courtroom, because it will spin out of control when the bond holders and other property owners realize they may be “getting screwed” by “made-up numbers.”

“Who’s paying for it? The answer is the taxpayers. Why? Because of [DCAD’s] incompetence,” Vexler said. “These people are clueless. This should have never happened. You can blame the Legislature. You can blame whoever you want. But as far as I know, there is no other taxing authority in Texas that’s having these problems. And for them to get rid of McClure, that’s just, as far as I’m concerned, the tip of the iceberg.”

The Denton Central Appraisal District building, on Morse Street, is shown in 2019.

Ahead of the Denton Central Appraisal District’s pivotal Tuesday afternoon board meeting, Denton County officials publicly asked the board to vote against hiring legal representation involved in conducting surveys, calling the relationship a “clear waste of time, energy and taxpayer dollars.”

County commissioners placed two DCAD-related items on the agenda for Tuesday morning’s Commissioners Court meeting, and after returning from closed session, County Judge Andy Eads read out another letter due to be sent to the DCAD Board of Directors.

According to the letter, a law firm — Dallas-based Fanning Harper Martinson Brandt & Kutchin PC — would be involved in surveying employees about Chief Appraiser Hope McClure. McClure has come under fire from several dozen taxing entities, which have asked for a change at DCAD’s most important leadership position.

“We strongly disapprove the hiring of a law firm to survey employees and taxing entities on the effectiveness of the current chief appraiser,” Eads said. “This action is a clear waste of time, energy and taxpayer dollars. We ask the Denton Central Appraisal District Board of Directors to address the leadership issues at hand quickly, decisively and effectively.”

According to the letter, board chair Roy Atwood discussed the surveys and law firm at a recent Carrollton City Council meeting. The law firm has been retained by DCAD at least once before, when the district hired it in 2019 to investigate its management practices.

DCAD’s meeting was scheduled for 3 p.m. Tuesday, with the law firm being just one of multiple agenda items.

Public hearings on the Denton County budget and tax rate for fiscal year 2023 took place Tuesday without any input from residents. The county is legally required to hold the public hearings before officials can approve the budget, though most of the legwork happened last month.

The Denton Record-Chronicle has published stories examining the $371 million budget and the 21.75 cent tax rate.