Workforce Solutions for North Central Texas will relocate later this year to a new building now under construction at Stonehill Center, off Interstate 35 at North Loop 288.

Denton’s Workforce Solutions for North Central Texas center is getting a brand-new home in the form of a 26,700-square-foot space at Stonehill Center off Interstate 35.

The center will occupy most of a new 30,000-square-foot building expected to be completed between mid-May and early June, vacating its current location at 1300 Teasley Lane.

Construction on the project, which is adding the new building to former parking lot space in Stonehill Center, began in August 2020. The building will be the fifth in Stonehill’s 166,225-square-foot shopping center, which was built in 1992 as an outlet mall but has functioned as a retail and office center for years, NorthBridge Management asset manager Rebecca Andreasen said.

The new location will allow Workforce Solutions to bring all of its services under one roof to better serve career seekers and community partners.

“Vocational rehabilitation staff are in a different location, but they are a part of us now, and our current facility doesn’t have office space available to accommodate them,” Workforce Solutions communications manager Stephanie Roberts said.

“We have a large number of people that we serve in the Denton County area, and this will be large enough to accommodate that and those staff,” Roberts said.

Workforce Solutions has been leasing its current 20,000-square-foot location on Teasley, and staff are unsure what plans, if any, are in the works for the space when they relocate, Roberts said.

Construction crews knock down the iconic sign at James Wood AutoPark on Wednesday. The sign was in the path of a future expansion of the Interstate 35E frontage road.

A handful of car dealership employees looked on Wednesday as a decadeslong Denton landmark was quietly toppled for an upcoming highway expansion project along Interstate 35E.

The sign, along with about 50 feet of the dealership’s front lot, was in the path of the Texas Department of Transportation’s interchange improvement project, which is expected to open for construction bids in early 2023. The city will take about an additional 20 feet of easement, with the dealership losing many of its front parking spots, James Wood executive manager Russ Ellis said. 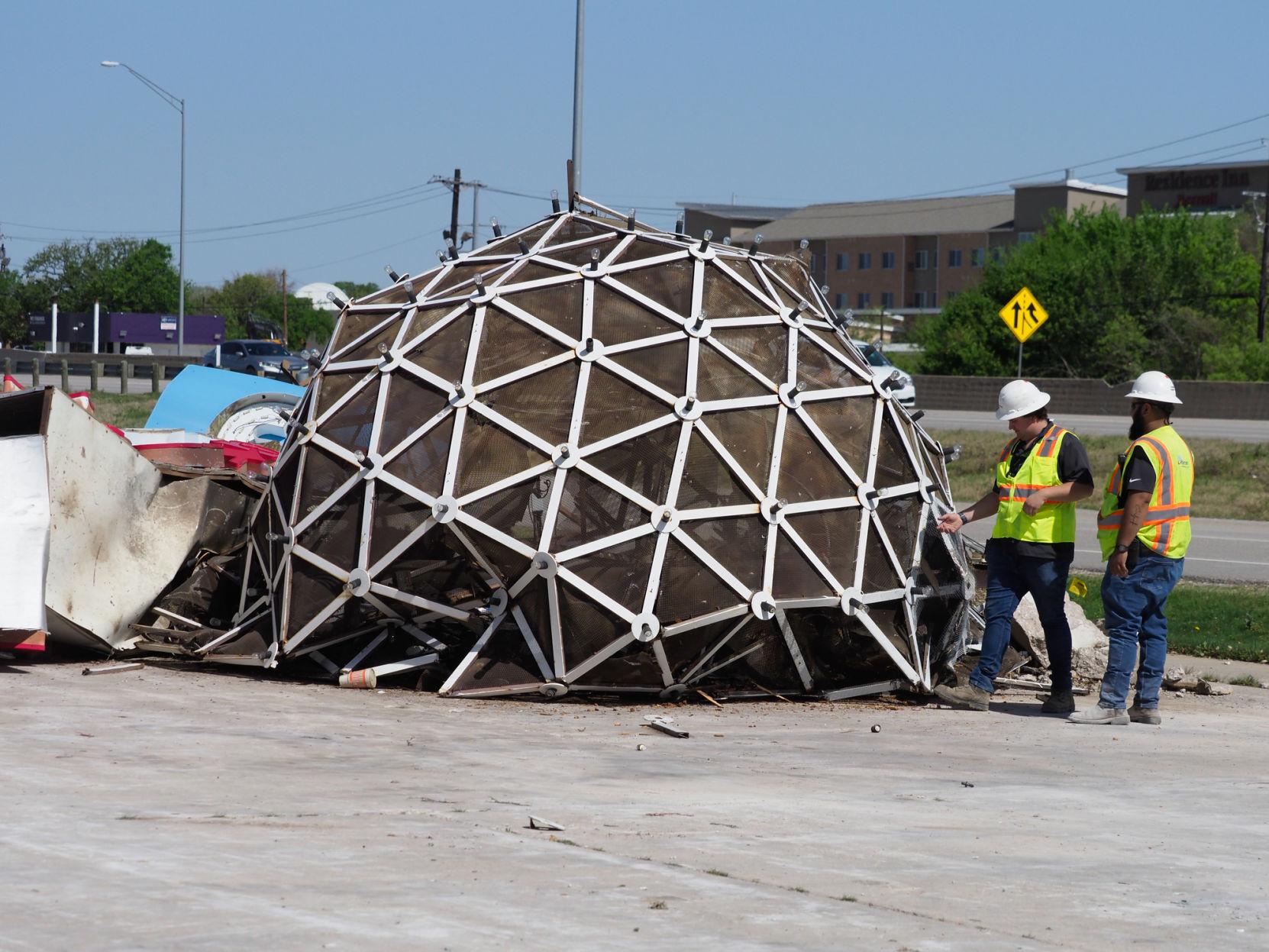 Construction crews clean up James Wood AutoPark’s iconic sign after it was taken down on Wednesday. The sign had stood along the interstate at the southeastern edge of Denton since the mid-1980s.

TxDOT has been in negotiation with the dealership for about a year, coming to an agreement in October and beginning work in January, Ellis said. The $77 million highway project involves interchange reconstruction at I-35E’s intersection with Mayhill Road and the expansion of four frontage road lanes from South Loop 288 to Pockrus Page Road.

James F. Wood, who owned namesake dealerships in Denton and Decatur for decades, died in April 2020 at the age of 82.

The sign has been at the dealership since around 1986, Ellis said, and the eye-catching silver ball is even part of the logo on the showroom’s website. The dealership plans to pave land behind the auto park’s buildings to relocate some inventory and, eventually, construct another sign out front that pays homage to the original.

“We definitely want to put it back up,” Ellis said. “Hopefully within a year, we’ll have everything permitted with the city where we can put up another sign just like it.”

Co-directors Micha Marie Stevens and Jen Peace said they know that the upcoming show at Theatre Denton might give people pause.

“I wondered about that before I read it,” Stevens said. “For me, the fact [is] that you’ve got a piece of theater that isn’t about politics so much, not about one side of the aisle or the other. It was the humanity. It was about women trying to make things better for everyone. I saw that it was not [about] this side or this side. These were women who were all working toward something bigger. They were wanting to see what can we do to empower and embolden all people.”

Peace said she contacted Stevens as soon as she saw the company’s call for one-person shows (or two-person shows, which Theatre Denton would only consider from performers who live together). Peace co-directs and appears as each first lady in the recorded performance.

“I had a light-bulb moment,” Peace said. “I read it and thought it was so great, and [March] being Women’s History Month, it seemed like the perfect show to pitch. The White House presidency stuff is still so hot. The show gives you this look back at what things were like here. We have come so far, but we’re still dealing with certain things, like voter fraud and racism.”

Peace said she’d been wanting to do a show with Stevens. The women have performed together in Denton Community Theatre’s Calendar Girls, and they’ve served on the board of the local theater, too. They pitched the show, and Theatre Denton included it in the spring season.

The show gives each first lady an act, in which she reflects on her public life, and how it intersects with their personal experiences and their inner lives. It finds each woman preparing to have tea with the incoming first lady.

The first ladies in the show were in the White House from 1963 to 1977. Their tenures represent a time of massive cultural change for women, but occupied an unelected role laden with tradition and expectation.

“I think each of these women in their own way challenged their role,” Peace said.

She said “the one I really fell in love with” was Lady Bird Johnson — “and I don’t know if it’s because she was first in the show, or if it was because she was from Texas, or [because] we drive her husband’s highway every day.”

“I didn’t realize how strong of a force she was in her husband’s administration,” Peace said. “I had no idea what was happening, and that the new biography was coming out [Lady Bird Johnson: Hiding in Plain Sight by Julia Sweig] and all these documentaries. I didn’t know that LBJ was ready to quit and she basically said no.”

Stevens was drawn to a different first lady.

“Pat Nixon was the person I was interested in,” Stevens said. “She grew up in California and she was born in Nevada, so those were big connections for me. The role of women was something all of these women were invested in, even though they weren’t boisterous. They weren’t pigeonholed, either. They each took steps outside of their comfort zone to do something to show their values. Pat Nixon spoke up about abortion. She said, ‘Let’s bring it out of the backwoods and deal with it.’ That was a major thing, and [Richard Nixon] was a Republican.”

Pat Nixon was a tougher first lady to research.

“Normally, when I’m preparing for a show, I’m pulling YouTube videos and searching for information and interviews. But there were very little interviews I could find with Pat,” Peace said. “She didn’t like discussing her life with the public, with the media.”

Peace and Stevens were able to talk with Bromka, one of the playwrights, and found that Nixon was an elusive subject.

“I guess Elaine took liberties with her because there is so little about her. She was a little tougher nut to crack and to relate to,” Peace said.

Stevens said the show made her seek out Richard Nixon’s famous resignation speech.

“Whatever you believe Richard Nixon to be, whatever you believe he did, that was one of the most powerful speeches I’ve ever heard,” Stevens said. “And Pat Nixon said she had never cried in public. But she was on that stage, and she cried that day.”

The co-directors put a team together to prepare to record the play. They worked with camera angles, and they decided that animation could tell part of each woman’s story. In addition to a simple set, the animation elaborates the mood and character of each character.

And when it comes to performance, Stevens said she worked to push Peace past simply speaking to the audience. Neither wanted the show to feel like a documentary with three talking heads.

To see the streaming production, visit theatredenton.com. Tickets cost $15 per household, and viewers can stream it once per purchase during April 9-18.

A Crowley man accused of running over and killing two children with a backhoe Saturday in Roanoke has been arrested and charged with two counts of manslaughter, authorities said Wednesday.

Vijender Chauhan, 40, was arrested and booked Sunday into the Denton County Jail in connection with the deaths of the two Roanoke children. Chauhan allegedly drove a backhoe while children and adults rode as passengers on various parts of the equipment before they fell.

Lonny Haschel, a spokesperson for the Texas Department of Public Safety, said troopers were called around 7:30 p.m. to investigate an incident in the 16000 block of Chapel Hill Court. Doug Parks, a fire marshal with the Roanoke Fire Department, said the incident occurred in an unincorporated area near Roanoke.

“Preliminary investigation indicates a John Deere backhoe was traveling southwest on Chapel Hill Court with multiple children and adults riding on various moving parts of the backhoe,” Haschel said. “While in motion, the driver of the backhoe operated equipment causing the front bucket to dump, and occupants riding in the bucket fell to the ground.”

Chauhan then allegedly ran over the children with the backhoe.

Parks said the incident involved a local family. Haschel said he couldn’t confirm the relationship between the two children and the man arrested.

The two children, a 7-year-old girl and 11-year-old boy, were pronounced dead at the scene around 7:49 p.m. The Tarrant County medical examiner’s public portal Tuesday hadn’t yet listed a cause or manner of death for the two children. Their last names are also Chauhan.

Two more children and an adult were taken to local trauma centers. Haschel said the adult’s injuries were serious. Chauhan was uninjured.

When asked about the status of the three injured individuals, Haschel said due to privacy laws, they receive patient updates only if the patient dies.

“The good news is, we have had no updates at this point,” he said Wednesday.

Ashley Robinson, a spokesperson from Trinity Valley School, confirmed the two children went to the private school in Fort Worth.

“It is difficult to find the words to express the sorrow we all feel for the loss of our young students,” Head of School Blair Lowry wrote in an email obtained by the Fort Worth Star-Telegram. “Teachers, coaches and administrators have provided opportunities for students to navigate their grief or to find solace in play or routine. We will continue to support our students in the days and weeks to come.”

Along with the two counts of manslaughter, Chauhan is charged with three counts of endangering a child and one count of aggravated assault with a deadly weapon. He posted $280,000 bail the day of his arrest and was released.

Manslaughter is a second-degree felony that carries a sentence of two to 20 years in prison if convicted. Someone commits the offense if they recklessly cause a person’s death.