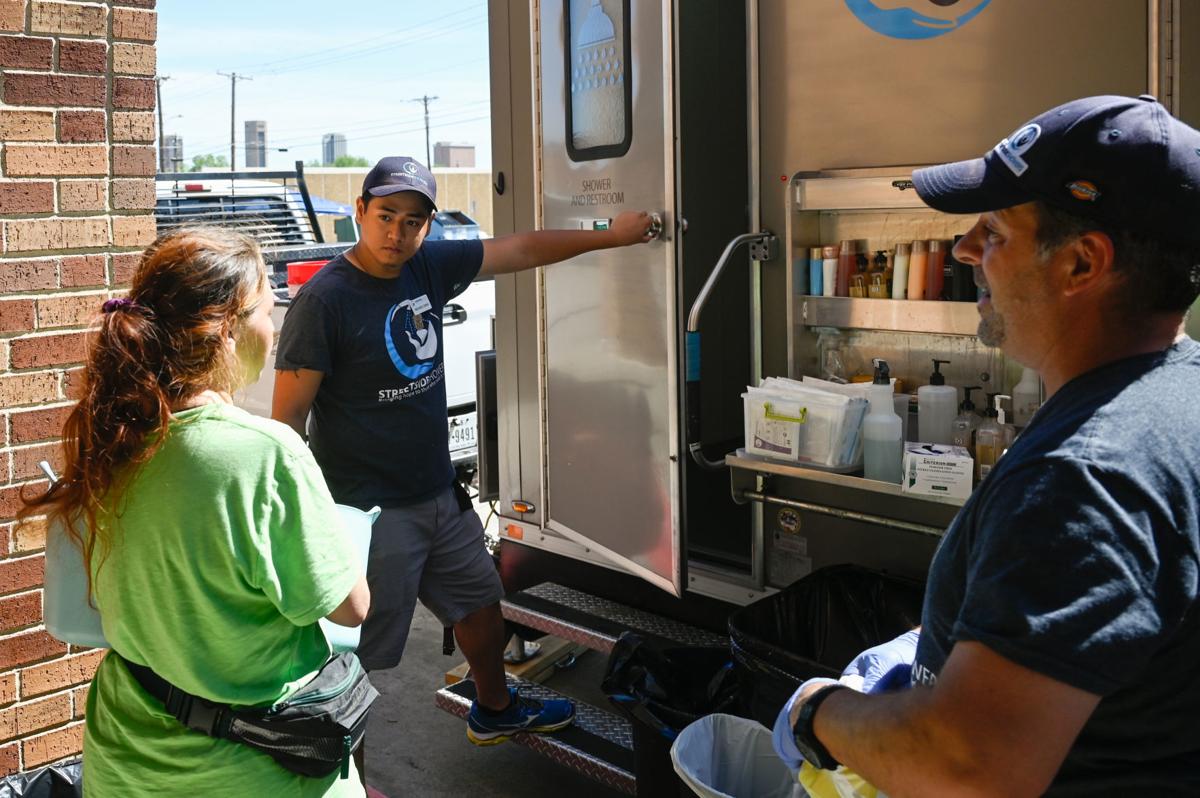 Founder Lance Olinski, right and assistant Michael Dang, middle, help a client before they hop into a shower room Friday at St. Andrew Presbyterian Church. Olinski and Streetside Showers haven’t missed a beat since COVID-19 cases have been reported here. The McKinney-based nonprofit comes every Friday to help its clients, who are homeless, get cleaned up, which is more important than ever in staying healthy during the pandemic. 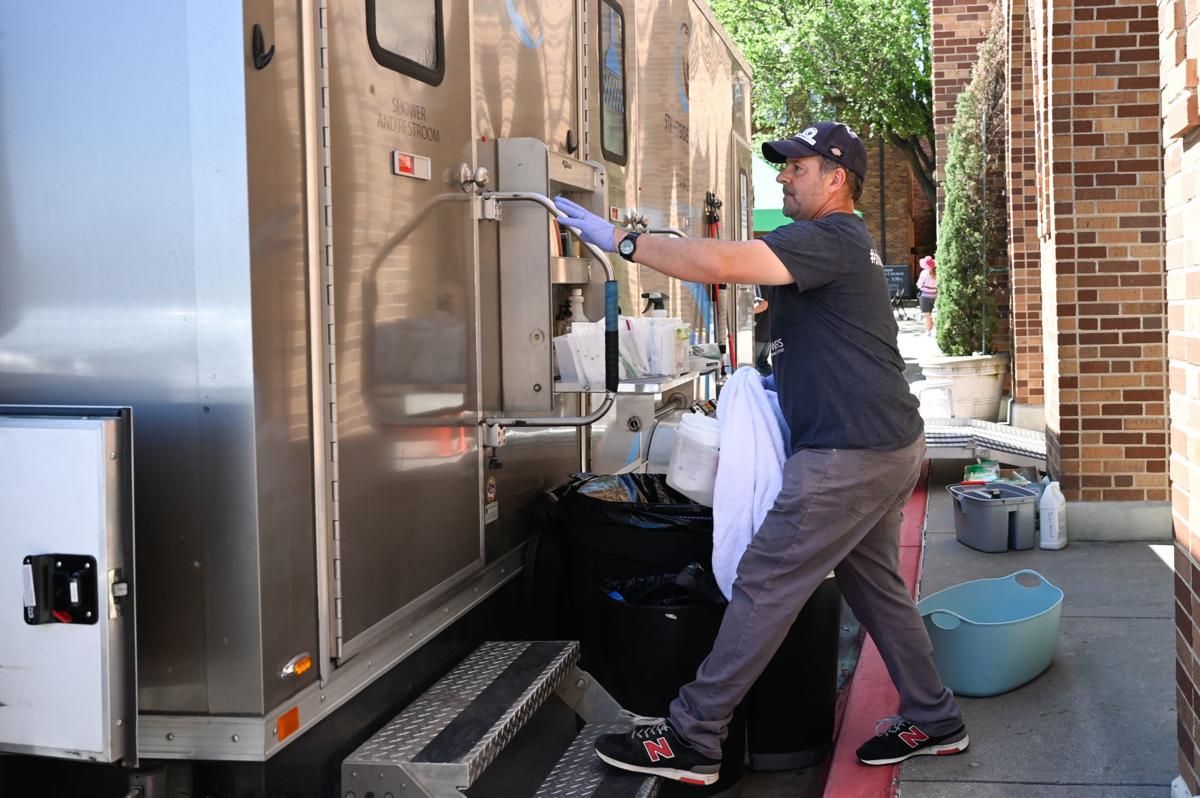 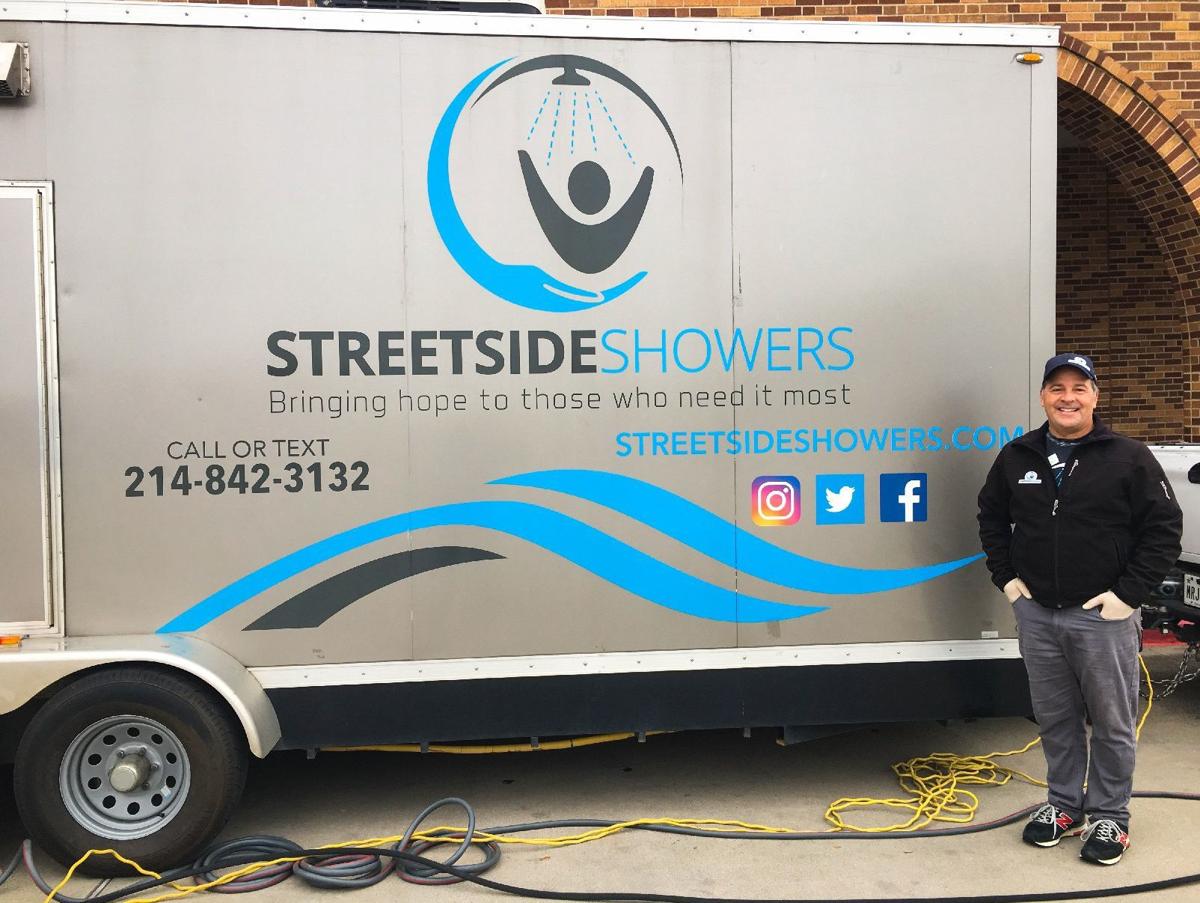 Lance Olinski, with Streetside Showers, a nonprofit based in McKinney, that provides mobile bathroom and shower services to individuals who are homeless.

Founder Lance Olinski, right and assistant Michael Dang, middle, help a client before they hop into a shower room Friday at St. Andrew Presbyterian Church. Olinski and Streetside Showers haven’t missed a beat since COVID-19 cases have been reported here. The McKinney-based nonprofit comes every Friday to help its clients, who are homeless, get cleaned up, which is more important than ever in staying healthy during the pandemic.

Lance Olinski, with Streetside Showers, a nonprofit based in McKinney, that provides mobile bathroom and shower services to individuals who are homeless.

Lance Olinski lathers his hands, covered by blue latex gloves, in aloe vera hand sanitizer. He grabs a spray bottle and disinfectant wipes to begin cleaning one of the three bathrooms in his gray and blue mobile bathroom trailer. He’s doing the extra deep cleaning before the next client gets 20 minutes to shower, use the toilet and brush their teeth.

Even though there is a stay-at-home order in place in Denton County, Olinski is helping people without a home. As businesses and gyms have closed, and stores that once were open around the clock have shortened their hours, Denton’s homeless have found it difficult to find a place to even wash their hands.

“Restaurants are closed, stops are closed, so just to even to use the restroom has been a challenge,” Olinski says. “Part of what we’re dealing with [in] this COVID virus is cleanliness, and so we’re really encouraging cities to provide more ways, through either washing stations or bathrooms, to be open so folks can stay clean throughout the week.”

He travels to Our Daily Bread every Friday to give Denton’s homeless population an opportunity to have a warm shower between 10 a.m. and 1:30 p.m.

He puts a towel, a washcloth, soap, shampoo, a toothbrush and toothpaste into a light blue plastic tub, and he gives it to a client to take into the bathroom with them.

Olinski is the founder of Streetside Showers, a nonprofit organization based in McKinney. The group provides mobile bathroom and shower services to individuals who are homeless. Streetside Showers goes to Irving, Plano, Denton and McKinney every week. The group has another location in Palm Bay, Florida.

He got the idea to start Streetside Showers in 2017 after seeing a man try to use a public bathroom in McKinney. He saw the man trying to wash himself using water from a sink, which planted the idea in his mind to start a shower service.

After googling mobile shower services, he came across Lava Mae, a nonprofit group that serves individuals who are homeless in San Francisco. He traveled and trained for a week with the people who work for Lava Mae. He brought what he learned back to North Texas to start Streetside Showers. He has provided about 6,400 showers since founding the nonprofit.

It’s common to find people waiting for him to arrive at a regular location, he said. They want to get on sign-up list first. His service has a reputation for being consistent in being at a certain location for a certain amount of time once a week, usually for three to four hours.

“We’re always going to be here, and so folks know that,” Olinski says. “They can count on us being here, so they’ll be here early because they really are looking forward to getting a hot shower.”

Running Streetside Showers has comforted him, knowing that he is able to make a difference in people’s lives. One client said he was a blessing to have around.

“After he came out, he just looked at me and just said, ‘Thank you. I feel human again,’” Olinski says. “Just to equate that to how they feel has been so significant because we know we’re changing lives if we give them hope.”

Since most of Olinski’s volunteers are older people, and since older people are more at risk of complications from coronavirus, he only has one other volunteer to work with him in Denton, making him much busier than usual during the pandemic.

According to the Denton County Homeless Coalition, 528 people in Denton County were experiencing homelessness since March 31 of last year. Out of that group, 117 were listed as chronically homeless, 56 were veterans and 17 were fleeing domestic violence.

Olinski says he thinks that he will be just as busy during the summer as a recession likely takes hold, triggering homelessness for more people. Last year, the Denton County Homeless Coalition reported that unemployment was the top reason why someone lost their home.

As one shower ends, Olinski cleans up and calls for Valerie, his next Denton client, to say that the bathroom was ready for her.

He puts aloe vera hand sanitizer on his hands, still covered by the blue latex gloves. He hands her a light blue plastic tub holding a towel, soap and shampoo — all the basic needs to stay clean in the time of a pandemic.

Students in Annette Nevins' public affairs reporting class in the University of North Texas Mayborn School of Journalism are profiling people involved in local response to the COVID-19 pandemic.