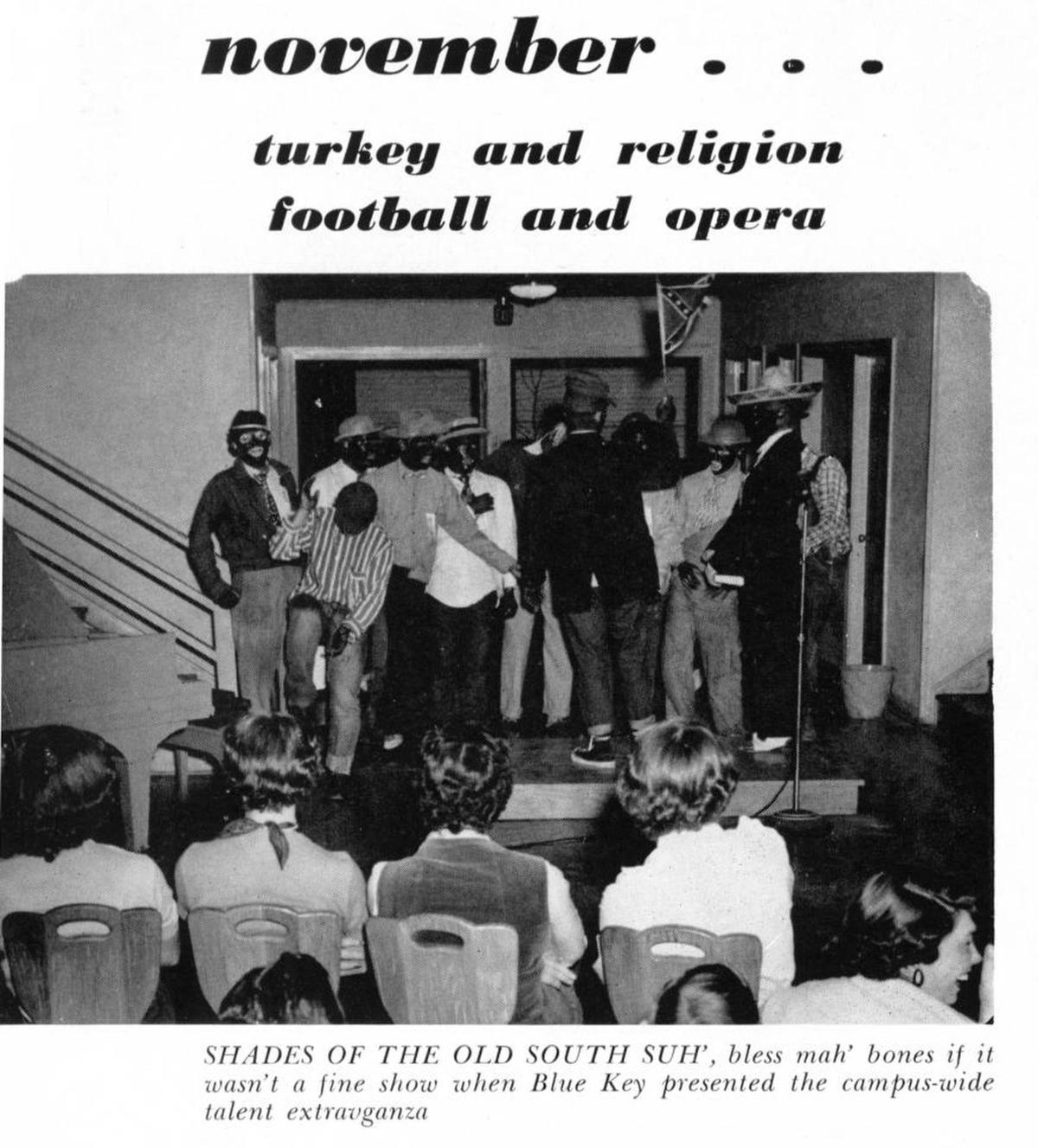 Page 26 of the 1951 edition of The Yucca, the yearbook of North Texas State College, shows a photo of students performing in blackface and standing with a Confederate flag in a campuswide talent “extravaganza” presented by the Blue Key National Leadership Honorary. 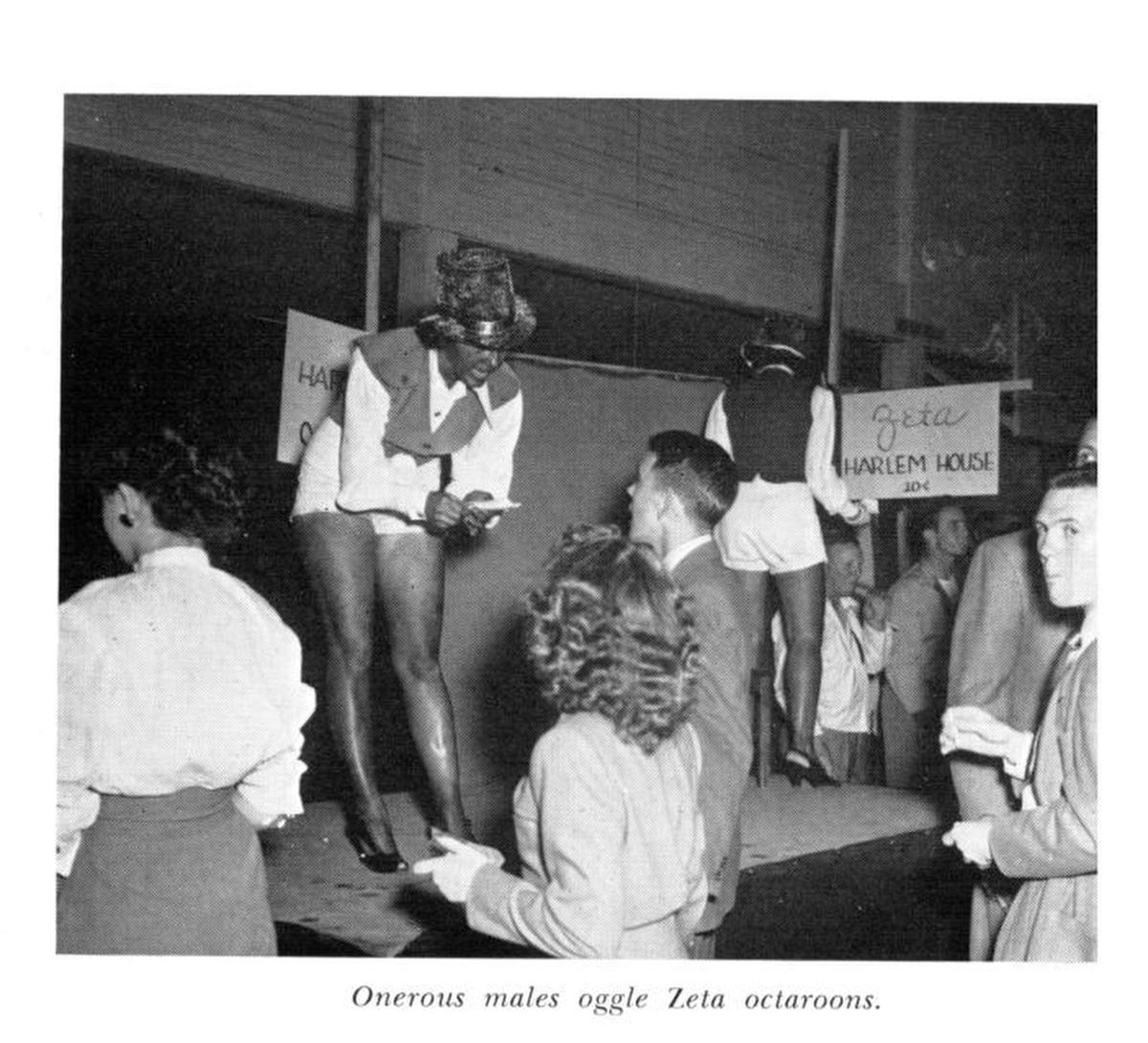 Page 84 of the 1950 Yucca, North Texas State College’s yearbook, has a photo of Zeta Pi Gamma sorority members performing in blackface at the Zeta “Harlem House.” 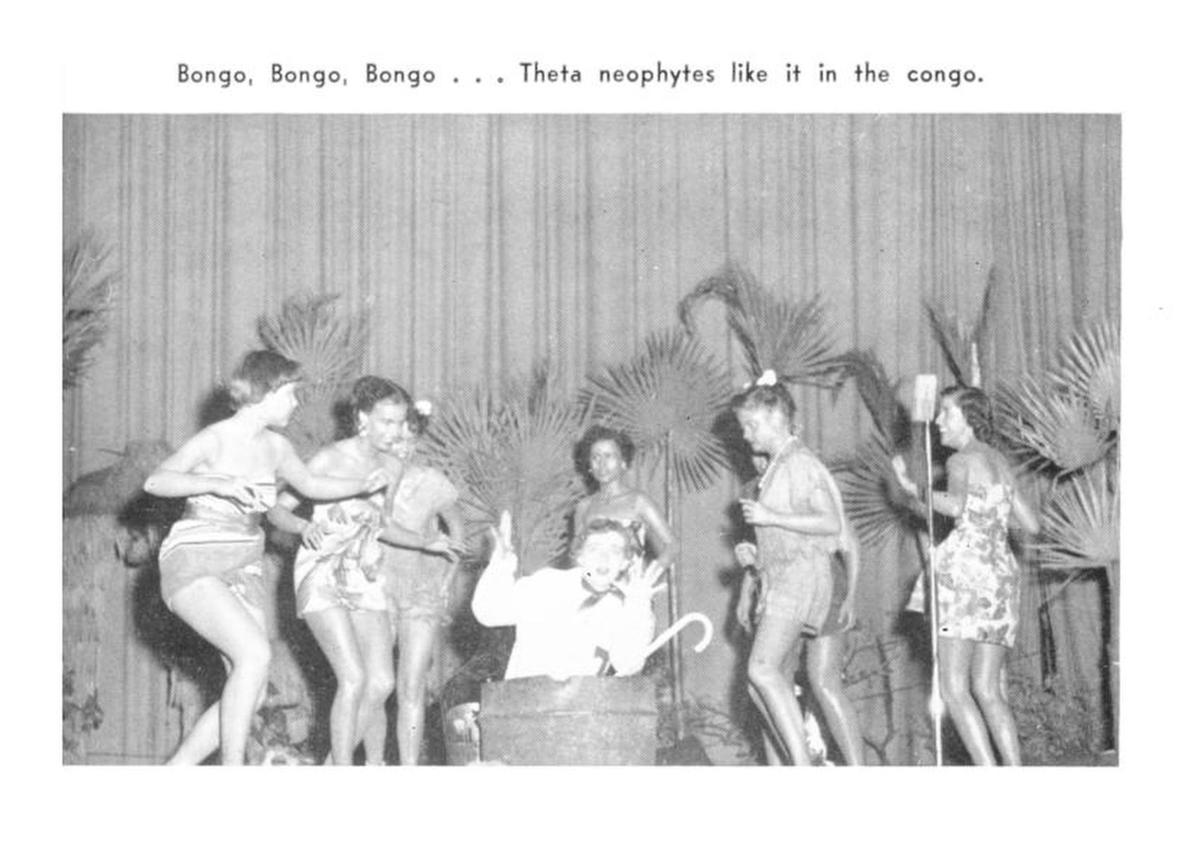 In the 1952 Yucca, a photo on Page 135 shows Kappa Theta Pi sorority members in blackface with the caption “Bongo, Bongo, Bongo ... Theta neophytes like it in the congo.”

Images of people in blackface, racist language and students dressed in traditional Native American and Asian attire were found by the North Texas Daily in University of North Texas yearbooks spanning from 1950 to 1963.

The Daily began looking at UNT’s yearbooks after USA Today published a story in which a team looked at 900 yearbooks from 120 colleges across the country.

“A crowd of weird-looking people watches Donna Belt’s interpretative dancing at a Zeta Tau Alpha costume party given by the fall pledge class,” reads a caption under a picture of a group of students, many of whom are in blackface, in the 1962 Yucca — the university’s yearbook at the time — on Page 305.

Doug Campbell, the journalism subject librarian at UNT, said he is not surprised to see these racist portrayals in past yearbooks and he would be surprised to not find those images.

“If they took photos of people in blackface or waving a Confederate flag, I would not be surprised if they were just thinking, ‘Oh, this is a party and people are just dressing up like that,’” Campbell said.

From minstrel shows, a type of performance troupe caricaturing black performers that originated in the U.S. in the 1830s, in which white performers used burnt cork and shoe polish to darken their faces, spawned blackface and the normalization of racist portrayals of black Americans, according to the National Museum of African American History and Culture.

“Blackface and the codifying of blackness — language, movement, deportment and character — as caricature persists through mass media and in public performances today,” according to the museum.

“I am under the impression that they shouldn’t have allowed that [racist images] in the first place,” said Dre Guthrie, a junior at UNT. “And I don’t think that was a very considerate thing to do for anyone.”

Though Brown v. Board of Education was decided in 1954, it was not until spring 1956 that UNT admitted its first black student, Irma E.L. Sephas. There were incidents of cross burning and racial slurs chalked on sidewalks in response to desegregation and black students could not live on campus initially, according to The North Texan.

“There needs to be accountability,” Campbell said. “But what does that mean? It’s no longer acceptable or excusable to say, ‘Well, they were just a product of their time.’”

Campbell compared the 1950s and ’60s to the 1920s, when Confederate monuments were being built. During that time, black Americans were beginning to experience more freedom, and those in opposition erected monuments as a form of resistance, he said.

Campbell said he believes blackface and other racist displays were a result of the civil rights movement happening at the time and were used as “a scare tactic.”

The issue of blackface and other racist imagery came to national attention when Virginia Gov. Ralph Northam apologized about his being in a racist photo of someone in blackface and someone in a Ku Klux Klan robe in his 1984 medical school yearbook.

A day after apologizing, however, Northam held a press conference in which he said he was not in the racist photo, but admitted he had darkened his face with shoe polish on a separate occasion — as part of a Michael Jackson costume for a dance contest.

Five days after Northam’s press conference, the Virginia attorney general admitted to wearing blackface for a party at the University of Virginia in 1980, as part of a costume of rapper Kurtis Blow.

“I’m glad it’s being pointed out,” Campbell said. “Because I don’t want [this] generation to look back and say, ‘Oh, that’s just the way things were back then.’”

Beyond blackface, there were photos of students dressed in racist portrayals of Asians and Native Americans found in the yearbooks the North Texas Daily looked at.

One photo of students dressed in a racist portrayal of Asian Americans found in the 1960 Yucca on Page 376 is accompanied by the caption, “DGS dress as Orientals in a campaign stunt for Homecoming Queen candidate Connie Hood.”

“I feel like UNT is very diverse and always has been so that kind of surprises me to see that [the North Texas Daily] found that,” she said. “During that time period it wasn’t as surprising as we find it now, I guess.”

On accountability, Alharbi said the people in the racist photos “should know that wasn’t right, but again, it was a long time ago.”

“Not saying that’s acceptable,” Alharbi said. “But I don’t really know what you can do about it now since it was so long ago.”

UNT freshman Moraya Pinon said she was not surprised there were racist portrayals of minorities found in the university yearbooks.

“It’s been going on forever,” Pinon said. “It will happen everywhere so I’m not surprised it happened here at school.”

UNT News director Leigh Anne Gullett denounced the behavior of the students and said racism is not tolerated on campus anymore.

“As we know from our nation’s history, this kind of behavior in the 1950s was unfortunately somewhat common on college campuses across the nation,” Gullett wrote. “Because we study our history, face it and have learned from it, our university today would not tolerate such behavior. We as a community today view such things as utterly reprehensible and completely incongruent with our values. UNT is an institution that respects and accepts all individuals and expects our community members to value one another.”

Campbell said with their yearbooks and the inclusion of racist imagery, UNT, among many other universities, played a part in the codifying of blackness.