Denton High School will have a new home. Now we know what it will look like.

The Denton school board got its first glimpse at the plans for the new high school, set to open on 152 acres of land along North Bonnie Brae Street in fall 2022.

The $194 million project is the most expensive item in Denton ISD’s 2018 bond package and will require careful coordination with the city as officials eye the widening of Bonnie Brae at the same time.

“Five, 10 or 15 years from now, this will be one of the most important buildings in Denton,” board member Jim Alexander said. “I think it will be as soon as it’s built.” 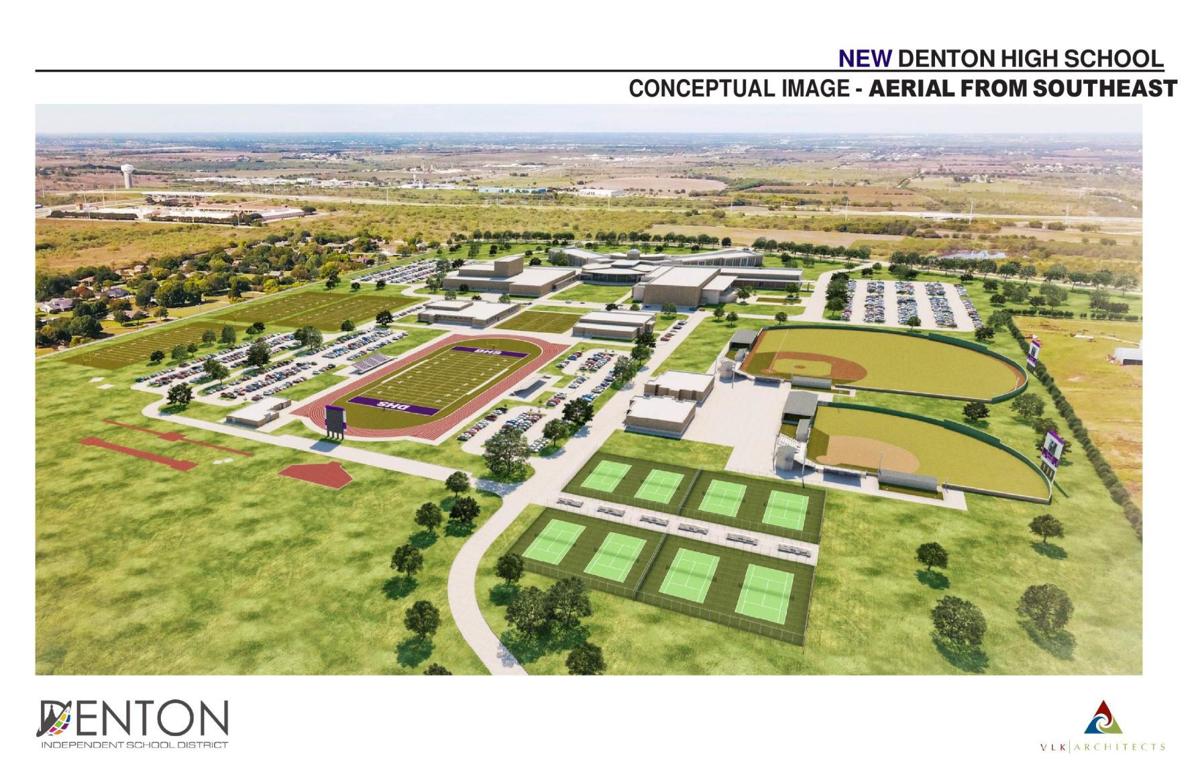 Similar to its process in the Strickland Middle School plans, which were unveiled at the previous board meeting, VLK Architects met with a committee of students, teachers and administrators to get an idea of what they wanted to see at the new campus. The final designs for Denton High produced a 490,000-square-foot, two-story building with hallways feeding into the cafeteria common area and the library.

The campus also will include three competition gyms, a fine arts corridor, an outdoor performance space and several sports fields.

The entrance includes a dome with a bronco statue atop, harkening back to the dome that dotted the high school in 1908 when it was on Locust Street. 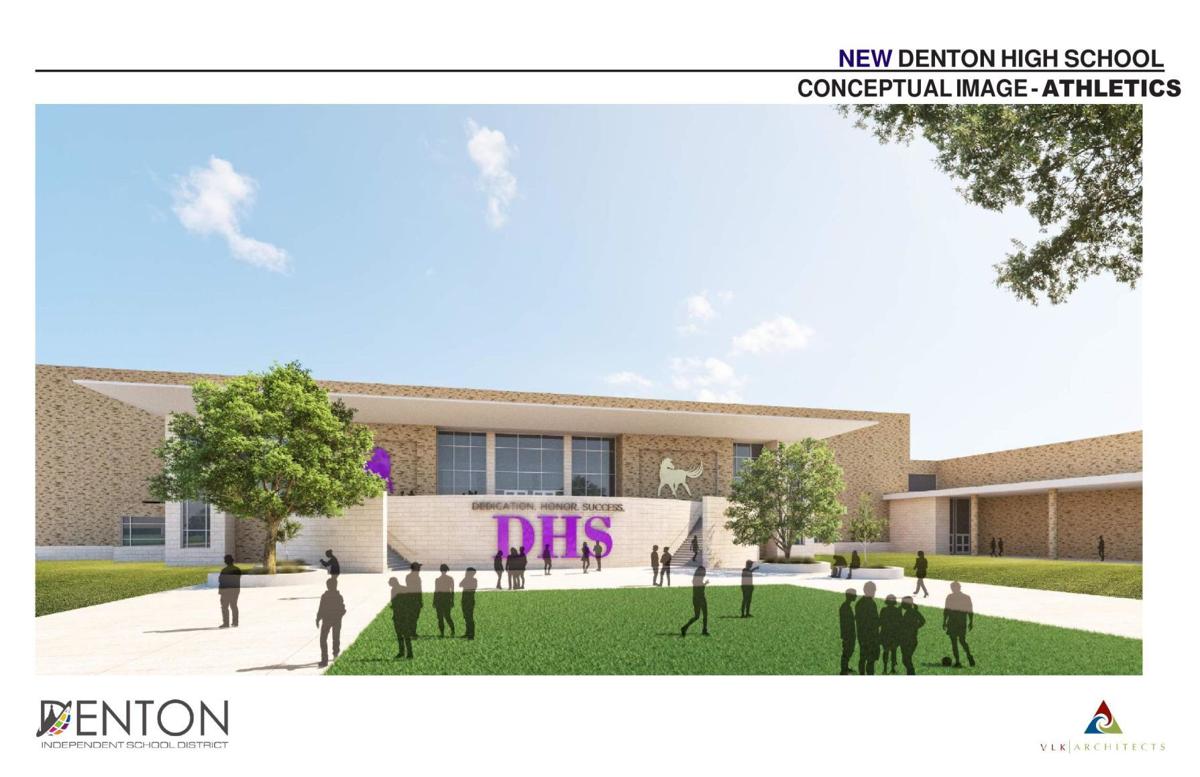 Architects designed the campus with a 2,400-student capacity in mind but said there would be room for expansion if needed. The prospect of that many new neighbors worried some people who live near the site.

David Martin addressed the board on behalf of his neighbors who reside in a quiet area along Westgate Drive, the street that serves as the western boundary of the campus. He asked school officials to consider some special requests, including the addition of a large buffer zone with a fence or wall between the school and the neighborhood.

“We appreciate the superintendent meeting with us a few weeks ago to hear our concerns,” Martin said. “He said DISD wants to be a good neighbor. So do we.” 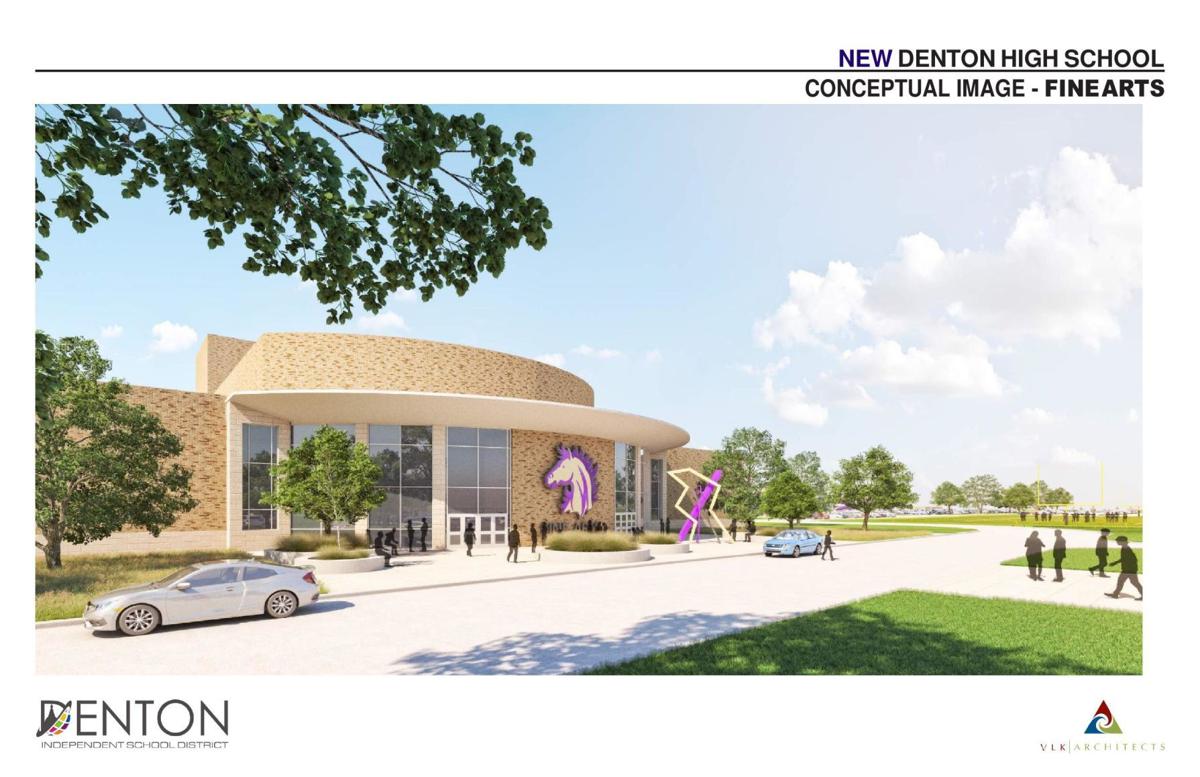 Sloan Harris with VLK Architects said the firm is drawing up plans for a proposed buffer, but he didn’t have specifics on what that might look like. He added that practice fields along Westgate would not have lights, which would prevent bright beams from straying into the neighborhood. In addition, builders will not connect the west side parking lot to Westgate to cut down on traffic in the area.

A gas well sits on the southeast part of the land near the proposed softball fields and tennis courts. The district weathered some criticism last year from community members who said Guyer High School’s practice fields are too close to gas wells.

Superintendent Jamie Wilson said the school’s athletic areas will be more than 500 feet from the well, more than twice the length of the city’s setback requirement for new construction near an existing well. 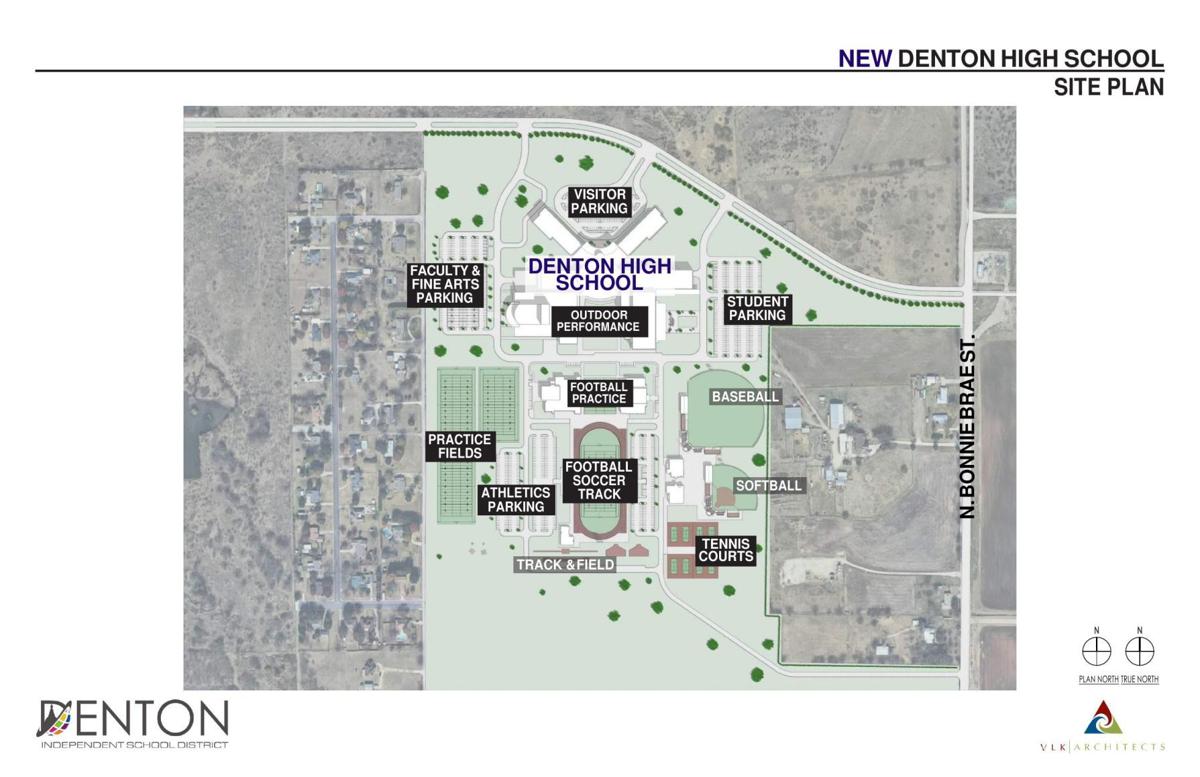 Opponents say the proximity of the wells could be a health risk to children. Several studies report a possible link between certain health issues (migraines, dizziness, nausea) and exposure to gas wells, but they note more research is needed.

Ed Soph, a member of the Denton Drilling Awareness Group, asked the board on Tuesday to consider a policy that would prohibit the district from selling its mineral rights to drilling companies. He also asked the board to explore the possibility of reclaiming mineral rights on sites that haven’t been drilled yet.

“Allowing these pollution sources to be sited near schools and athletic fields is an unacceptable and dangerous gamble,” he said.

Wilson didn’t shoot down Soph’s proposals outright but said achieving them might cost the district.

“Purchasing people out of their mineral rights and not having access to your own, that’s not just something we’re just going to jump out and do,” Wilson said. “You have to look at the financial implications of that.”

The nearly four-hour meeting derailed at one point during a tense exchange between board members and Willie Hudspeth, a local activist and businessman.

Hudspeth is a familiar face at open meetings all across town, often addressing city officials and county commissioners as well as board members during open forums. For months, Hudspeth has voiced his frustration over the lack of black head football coaches in the district. On Tuesday, he brought up a white coach in the district who had been arrested on a charge of drunken driving two years ago.

Denton ISD’s attorney Randy Stout interrupted Hudspeth with a point of order and said the man was breaking the rules of public comment by calling out a specific employee. Hudspeth pushed back on the claims, saying he simply was reading from a newspaper article about the incident.

Denton ISD policy states that complaints against certain employees must be filed within the parameters of the district’s formal grievance process. When speakers sign up for the public forum, they must fill out a card with their name and basic information. On the back of the card, Rule 6 states speakers aren’t allowed to reference an employee by name or specific job title.

“Mr. Hudspeth, you’re more than welcome to make your comments,” school board President Mia Price said. “I just ask that you don’t refer to personnel by name.”

Hudspeth refused to leave after his three-minute speaking time expired because he was interrupted during his comments and dared officials to call the police. Price declined to do so, and Hudspeth left after several moments of silence.