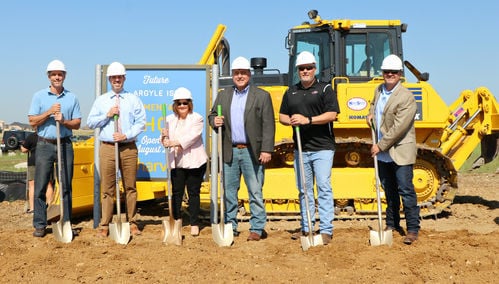 Argyle ISD officials break ground on the district’s new elementary school at the Harvest Community in Northlake. The school is expected to open for the 2019-20 school year. Pictured from left are school board member Ritchie Deffenbaugh, school board President Sam Slaton, Superintendent Telena Wright, school board members Brad Lowry and Jeff Williams and school board secretary Craig Hawkesworth. 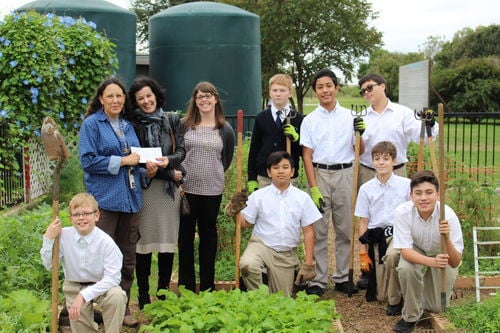 Representatives from Keep Denton Beautiful present a check to Immaculate Conception Catholic School students and teachers to help fund a greenhouse in the school’s garden. The statewide Keep Texas Beautiful organization also named the school the winner of the Sadie Ray Graff Award, which recognizes schools that promote environmental education in the classroom. 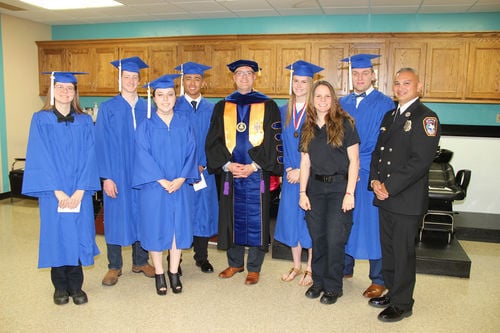 Every student at E.P. Rayzor Elementary met their reading goals at each leg of the Texas Motor Speedway’s Speeding to Read contest, a feat that pushed the school into the top spot.

The winning schools and individuals will be honored at an assembly at the speedway this week and receive congratulations from IndyCar and NASCAR drivers.

The tuition-based program is open to students between ages 3 to 5 and enrollment is limited. District officials say there are still a few spots in the daycare center, which takes care of children starting at 6 months old.

Registration packets are available at the learning center, located at 415 Tisdell Lane in Aubrey. For questions or more information, call the center at 940-668-0066.

Prior to joining Aubrey ISD, Lewis spent seven years with the Little Elm Police Department, serving as lieutenant for five of them. He also oversaw the Little Elm ISD school resource officer program.

City and school officials, local business leaders and volunteers surprised Aubrey ISD teachers earlier this month by handing out more than $22,000 worth of grants for classroom technology and programming.

Representatives from the Aubrey Education Foundation, Aubrey ISD, CoServ and the city of Aubrey gave out 11 grants that will help fund things like robotics teams, class iPads and a Google smart speaker.

The teacher grants go to teachers or librarians who bring in innovative programs, while the technology grants go to district technology staff members or campus principals who want to use technology to enhance classroom learning.

Winners are selected by a committee of administrators and grants are funded by the Aubrey Education Foundation, CoServ Charitable Foundation, Boeing and the Aubrey ISD Employee Giving fund.

To join the organization, students must meet high grade point average requirements and exhibit characteristics of leadership and service. New members include:

The Sweepstakes Award is one of the highest honors given to school student councils and can only be won by being recognized for outstanding programming in four areas: community service; drugs, alcohol, safety and health; energy and environment; and pride and patriotism.

After competing in 19 academic and theatrical categories, Liberty Christian came in fourth overall at the Texas Association of Private and Parochial Schools state contest last month.

Students traveled to Waco in April to compete against 21 other schools from across the state. The school’s individual winners include:

The contest invites students in the first through eighth grades to compete in academic and art contests at the district and state level. Hundreds of students traveled to Liberty Christian in March for the district contest, where 11 Liberty students qualified for the state contest at Texas Christian University in April.

State winners from Liberty include: