Denton County elections officials will nearly double the number of polling locations in November after a civil rights group notified them and other Texas counties they were likely afoul of state election laws.

The analysis by the Texas Civil Rights Project came months before the pandemic but has new urgency now. State officials are fighting the prospect that mail-in ballots could help the average voter with social distancing. If Texans don’t get relief on that issue in federal courts, voters must plan for time — and distance — at the polls come Election Day.

The problem, according to an analysis by the civil rights attorneys, is that many counties set up a single polling location for several precincts. The practice is allowed by law, but only within limits, so that voters aren’t expected to wait in long lines. One key limitation prohibits a combined polling location that serves more than 5,000 registered voters. 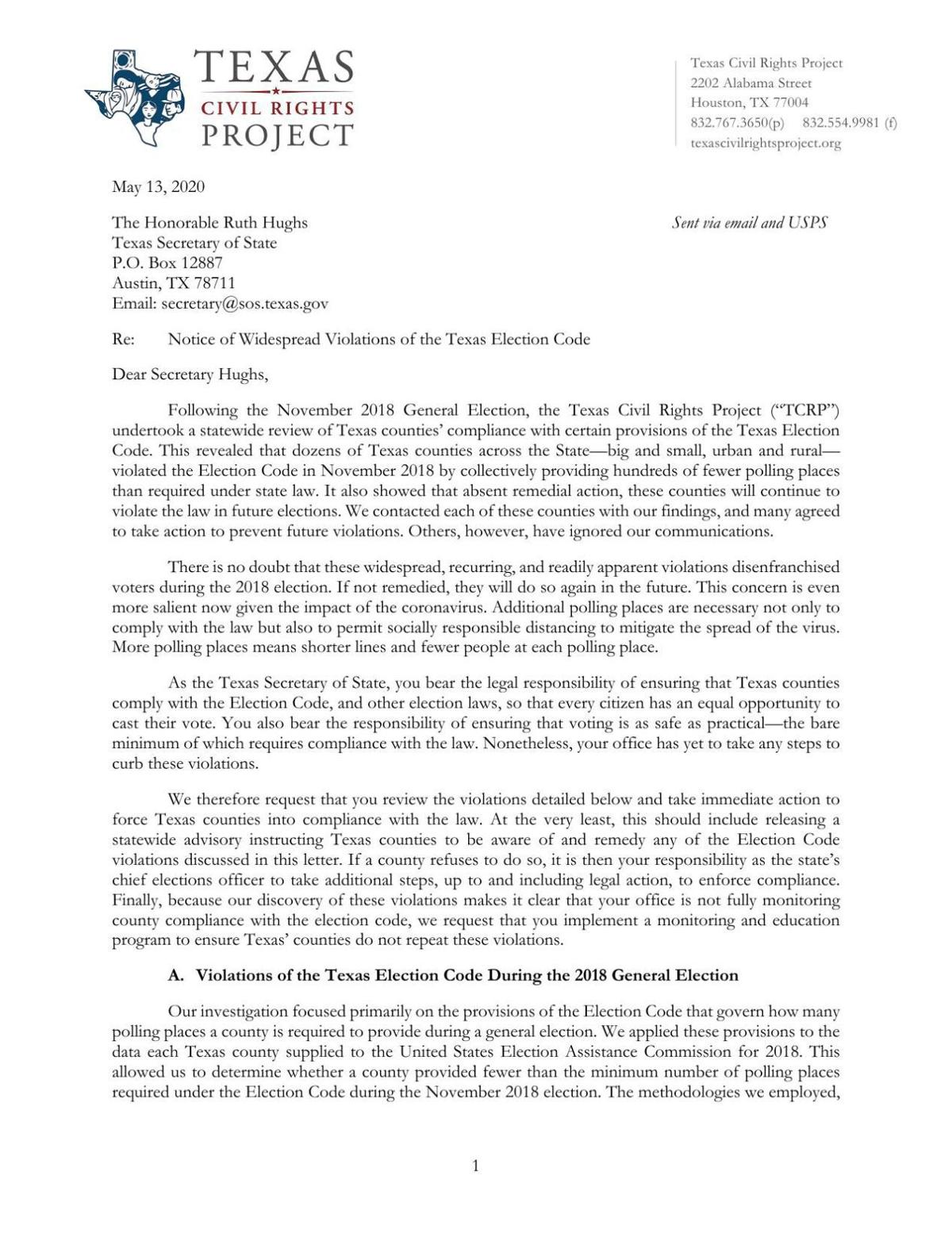 The Texas Civil Rights Project, a nonprofit advocacy group founded in 1972, wrote Texas Secretary of State Ruth Hughs a letter on May 13 about the issue. Denton County’s setup for the November 2018 election was the lead example in its letter requesting that Hughs not only guide Texas counties but also enforce the minimum requirements under state law, particularly considering the pandemic.

This week, the Texas Secretary of State’s Office shared some guidance for holding elections in the pandemic based on typical practices recommended by health officials at the Centers for Disease Control and Prevention. But the office said nothing on the basic matter of having enough polling locations to start with.

The office did not respond to multiple requests for comment.

Frank Phillips, Denton County’s elections administrator, said county elections employees began planning a year ago, knowing that the 2020 presidential election could be the largest in the county’s history. 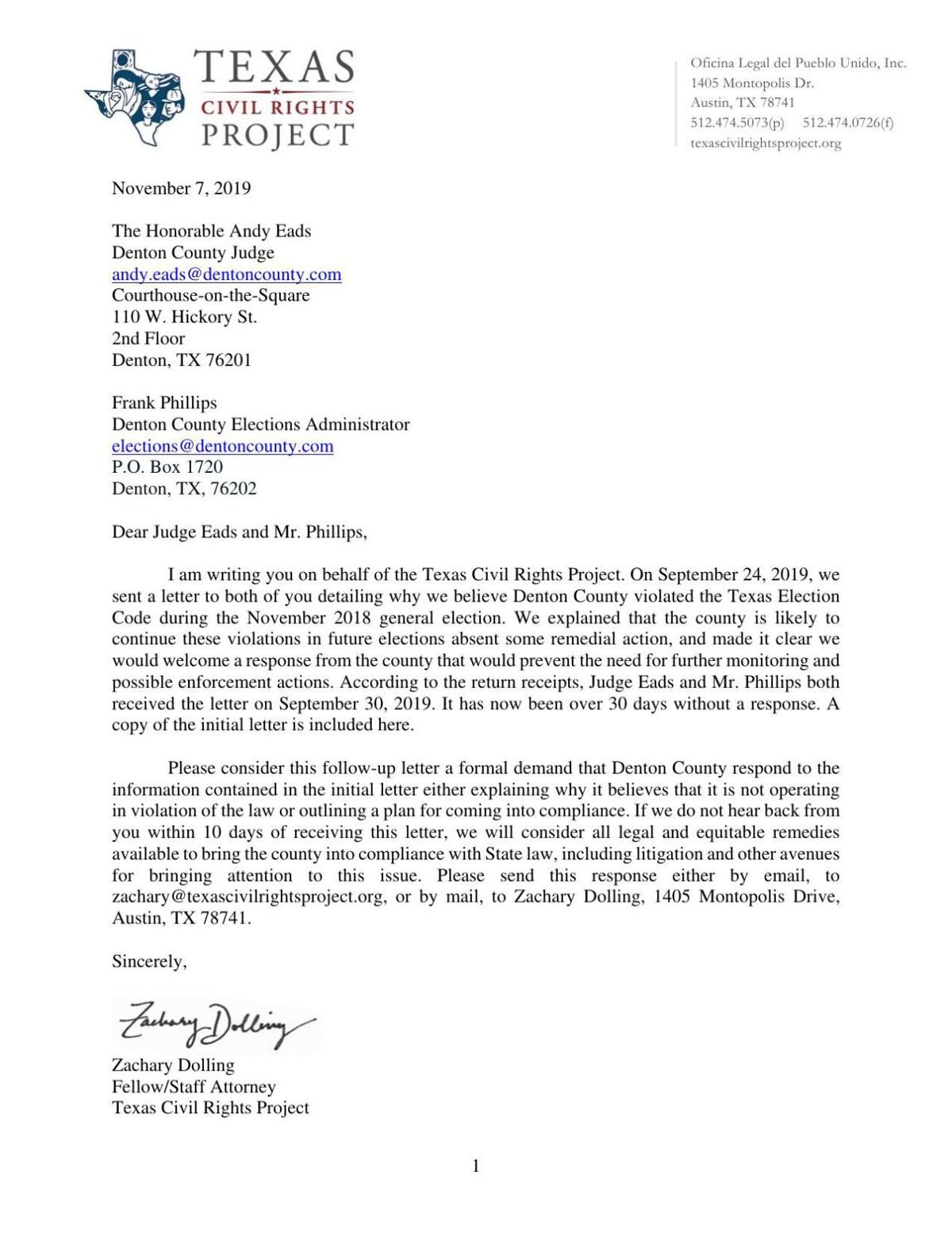 Phillips said he notified the county’s school districts early on that they would need more facilities on Tuesday, Nov. 3.

“We told them that we were going to need a polling site in every precinct,” Phillips said. “That will do a couple of things. We have more places to go vote, and it will allow us to not pack as many voters in a site as before.”

Elections officials even recommended that school districts plan for the traffic and schedule a teacher workday that day, since students would otherwise be in school that day, he added. Denton ISD, for example, lists Nov. 3 as “Possible Exchange Day/Student Holiday” on its 2020-21 calendar.

Since the pandemic, Phillips has gone back to the districts and asked for gymnasiums and other large rooms in order to help with social distancing.

So far, no schools have pushed back on their requests, he said.

By law, elections officials have access to public buildings, like schools, whether they are welcome or not. They still try to be good neighbors, he added.

The pandemic is challenging elections officials much like everyone else, Phillips said.

The mixed messages from state officials and the courts make it difficult, too.

Gov. Greg Abbott recently extended the early voting period for the primary runoffs in July after elections officials already lined up agreements for facilities. Luckily, for Denton County, all of the facilities were available to hold another week of early voting, Phillips said.

This week, Abbott told reporters he was considering extending the early voting period this fall, too.

But local elections officials have had no specific guidance on what to expect there, nor what to do about mail-in ballots, Phillips said.

A Texas Supreme Court decision this week says county elections officials cannot provide mail-in ballots to people who claim lack of immunity to COVID-19 as a disability, but they cannot question someone’s declaration of a disability, either.

Meanwhile, another lawsuit in federal courts could be headed to the U.S. Supreme Court about whether Texas must provide mail-in ballots.

The mixed messages are tough on elections officials and voters, Phillips said.

The Secretary of State’s Office is supposed to help local elections officials comply with state and federal law.

“We await the Secretary of State’s guidance about how to handle mail-in balloting,” Phillips said.

The most voters assigned to a single polling location for 2020: less than 5,000