They had a fever, dry coughs, shortness of breath and tightness in their chests. All are symptoms of COVID-19, but the Denton County residents couldn’t get tested because their symptoms weren’t considered severe enough.

The Census Bureau estimated 28,995,881 people live in Texas as of July 2019. However, only 21,424 people had been tested for the new coronavirus COVID-19 by Thursday morning, according to the Texas Department of State Health Services.

The U.S. Centers for Disease Control and Prevention states that not everyone needs to be tested for the virus, but Denton resident James Nunns said it would still be good to know because showing symptoms has changed his life.

“One thing that really aggravates me as a person, in general, is seeing all these statistics of how (much) coronavirus testing there is … when those numbers are far from accurate,” Nunns said. “I’ve been working in a hospital [before self-quarantining], so I thought it’d be important to know if I’m positive.”

Nunns, 50, Emily Burns, 35, and Kiana Olim, 19, are a few people who reached out to their primary care physicians and other health services to try to get tested for the new coronavirus after they started showing symptoms this month.

Burns said she doesn’t know how she could’ve gotten sick since she didn’t travel, but Olim traveled out of the state in mid-March to California.

Nunns is a retired paramedic and was in the middle of his second internship as a dietician before his symptoms started. His fever started early this week followed by a dry cough and a sore throat “from hell.”

He tested negative for strep and influenza after going to urgent care, where a doctor there told him his illness was most likely the coronavirus, but he couldn’t get tested.

Nunns said he drove around the Dallas-Fort Worth metroplex and beyond to get tested to no avail. Now, he’s sticking to phone calls to ensure he can get tested.

He was told he’s considered mild to moderate since he’s not in need of oxygen and doesn’t have any underlying conditions.

“I’ve never thought it would be this difficult to be tested over something that’s all over the news,” he said. “It shows you’re not really able to track the areas of people that are contaminated. You have to be basically on your deathbed.”

Being tested would also help his wife because she can’t go back to work unless he’s cleared, he said.

Burns, an insurance worker, has worked from home for the past week as a precaution and has been in self-quarantine since March 11. After calling the Texas Health Resources Coronavirus Hotline, she was told she couldn’t be tested unless she was in the emergency room with severe symptoms.

“They also stated that they did not have enough tests to go around and were trying to save them for people that were older or immunocompromised,” Burns said. “I advised I was immunocompromised and was told that by ‘compromised,’ they meant HIV or cancer.”

The state health services department’s most recent Guide Testing for COVID-19 states that people with listed clinical features and epidemiological risks should be tested. 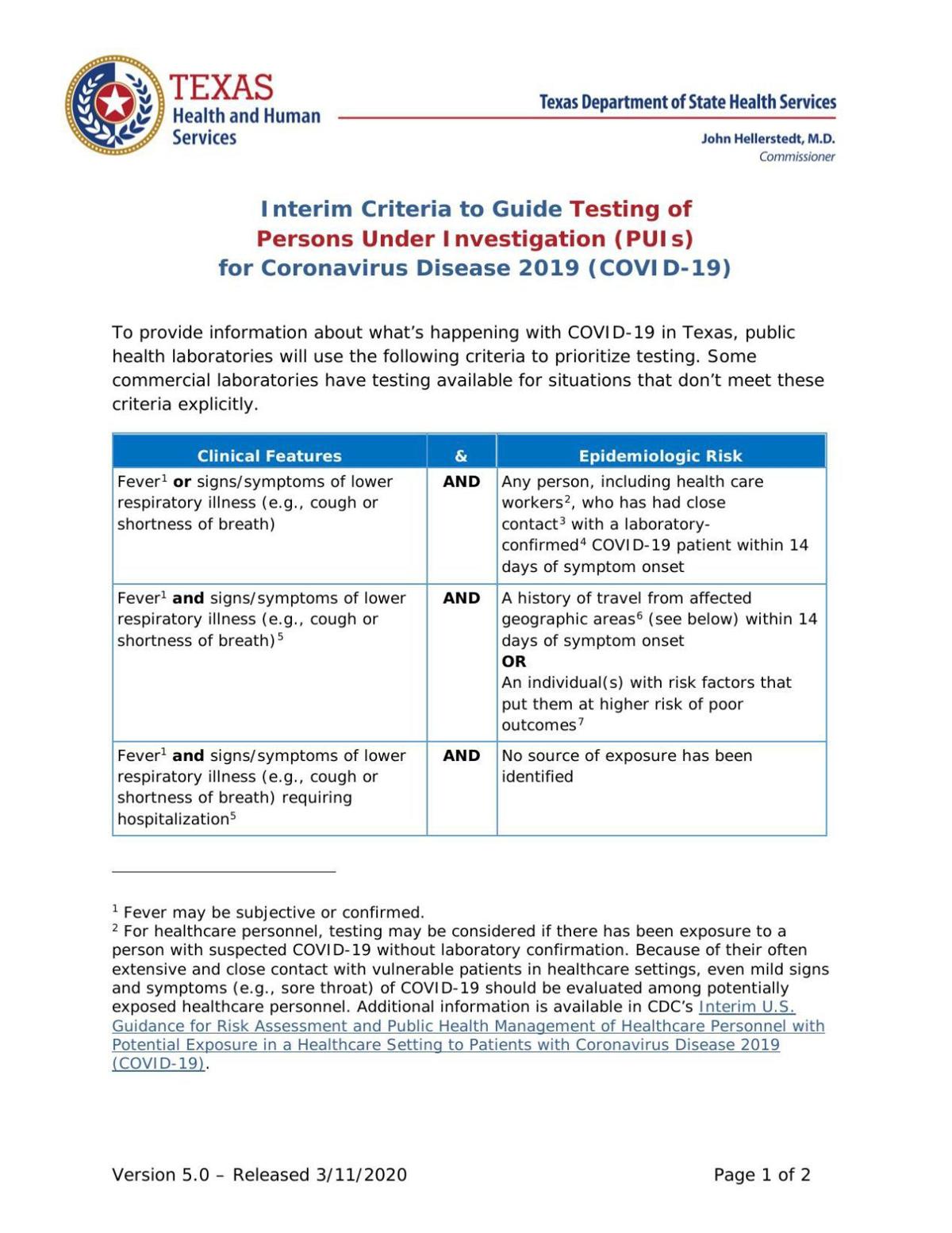 Clinical features include a fever, though the guide notes that the fever may be subjective or confirmed. The guide states individuals with risk factors that put them at higher risk include adults over 65 years old and people with chronic medical conditions and/or an immunocompromised state.

The guide also states other laboratories can test for situations that don’t meet the criteria listed if a provider believes an individual should be tested. Tests done by private labs are at 18,744, while 2,680 have been done at public labs, according to the state health services department.

People with COVID-19 symptoms who couldn’t get tested said they were told there weren’t enough tests, or any tests, in Denton County and were told to self-quarantine. Denton County Judge Andy Eads said Thursday during a news conference that there’s a constraint in the availability of testing in the county, so they have to prioritize who gets tested.

Burns and Olim said they felt dismissed by some medical professionals.

Olim said she and her friend took precautions while traveling — wearing gloves, masks and using disinfectant wipes — but by the time she got back to Denton on March 18, she was starting to feel sick. The next day, she had a fever and called her doctor.

After making calls to her personal doctor, the Denton County Health Department and urgent care, she was able to schedule an appointment in an emergency room.

“I was tested negative for strep and influenza,” Olim said. “After that, they took blood to run lab work for underlying issues, nothing … The doctor came in five hours later [and said], ‘Because you’re in a healthy age group, we’re gonna send you home to self-quarantine. There are no tests available in Denton County.’”

Denton County Public Health previously said they send specimens to Tarrant County, where they’re able to test. Jennifer Rainey, a spokeswoman for DCPH, said they don’t have the total number of tests performed in the county since providers, hospitals and labs aren’t required to report that number.

“I go to the ER, and they do all these tests, then I get told there are no [COVID-19] tests,” Olim said. “Why didn’t they just tell me to begin with? Now I’m being charged all this money for an ER visit. That was very frustrating. I felt very dismissed.”

Olim said her fever was gone on Monday and that she was told to call the Health Services of North Texas in Denton for a followup. She said she insisted to them she only wanted to ask a few questions, but the person on the line kept saying that they’re not taking anymore patients and that they couldn’t help her.

Teri Johnson, a spokeswoman for Health Services of North Texas, said that at one point last week, they were no longer accepting new patients since they didn’t have sufficient personal protective equipment.

Johnson said she’ll follow up with the Denton center about the response.

“Health organizations and referral organizations [are] scrambling, and things change every single day [because of COVID-19],” Johnson said. “Your PCP [primary care physician] is who you need to reach out to regarding if you’re feeling symptoms.”

Living in quarantine has been “comical,” Olim said, with the way she and her dad have been interacting. She’s in self-quarantine until at least April 4, more than two weeks after returning from her trip.

“I stay in my room [where] I don’t wear a mask,” Olim said. “Whenever my dad has a question, we talk through the door and try to maintain 8 feet of distance.”

If she needs to leave her room, she texts her father, Warren, so they can all put on masks and gloves. Olim said she limits what she touches and wipes down anything she does touch. There are two bathrooms at her home, so one is designated for her. Her dad leaves her dinner outside her bedroom door.

Burns lives alone but hasn’t seen her boyfriend, fearing that she could get his child sick.

“My doctor said I shouldn’t see anyone until I was three days without symptoms, but of course now that I’m feeling better Denton, is on orders to stay at home,” Burns said.

Nunns said it has been horrible for him since he’s an independent person.

“I’ve been in this room pretty much to keep away from the family for three days now,” he said. “Your life is totally turned upside down. The only thing that keeps you going is knowing it’s temporary.”